December 4 2015
29
Mortars - large-caliber guns with a short (15 caliber) barrel, bombarded their shells along a hinged trajectory, were born along with the bombardment. Like her, mortar shot stone cores. But only her shells fell on the enemy's head, flying over the walls of castles and fortresses. And if these walls themselves could at least somehow protect their inhabitants from the bombardment cores, then it was impossible to defend against mortar fire. In the Military History Museum of Vienna, the mortar "Pumhard" of the early 15th century is exhibited. Its caliber is 890 mm, that is, it is equal to the caliber of our famous "Tsar Cannon", and she fired a stone core weighing 800 kg! But although no roof could protect it, it soon became clear that it was not very effective. weapon for war. After all, the stone cores are not torn! Therefore, the military soon decided to shoot mortars with pig iron "bombs" filled with gunpowder. To ignite the charge, an ignition tube with pressed gunpowder served, which powder gases, which escaped with the projectile from the barrel, were set on fire immediately at the moment of the shot. The bomb flew, and the tube burned, and when it fell, then ... after some time an explosion occurred. Moreover, the defeat was inflicted and its own weight, and the explosion of its charge. Peter I, however, ordered the gunners "first to fire a bomb in the mortar and then to fire it behind," which was quite dangerous, but it made sure that the projectile would necessarily explode.


The effectiveness of mortar fire was very high, especially if it was necessary to shoot at the fortifications. After all, among the British and French during the siege of Sevastopol during the Crimean War, there was no superiority in artillery over the defenders. On the contrary, it was at the besieged Russian garrison! But only the Sevastopol residents mainly had cannons that shot hard with their cores, and the allies, who outnumbered the defenders of the fortress with the number of heavy mortars, bombarded them day and night with destructive explosive shells. And their fire was so effective that our troops had to leave Sevastopol! They were used in navy, on special bombardment ships or, as they were also called "bombing caches." They had deck reinforcements and several heavy mortars. They were shot at coastal fortifications, but also at the enemy fleet. Of course, getting from an mortar to an enemy ship was more difficult than from a lay gun, but on the other hand, the damage to it from an explosive bomb was incomparable. A bomb pierced the deck, or even more than one, and exploded inside the ship, which often led to a fire.

At the same time, the weight of mortars was very large, besides their installation in positions required a lot of time. When firing, they jumped strongly, causing their tip to go astray. Known, for example, the Dictator 330-mm mortar, which the northerners used during the siege of Petersburg in Virginia in the 1864, weighed 7,7 t, so it was even put on the railway platform. The shell for her weight 100 kg raised two people with special tongs, and her carriage served as a staircase.

It can be said that it was the war between the North and the South that became the “swan song” of smooth-bore mortars. Then mortars became rifled and acted quite efficiently at times, but their role was steadily decreasing. Well, today mortars and did become the property of museums, where their stupid, “backward”, heavy and often huge is kept a lot. Well, it is very interesting to consider them, and this is what we are going to do now. 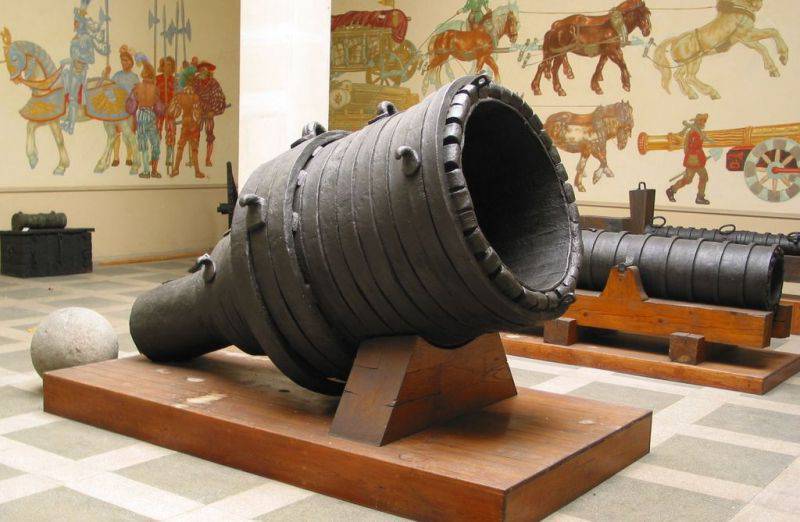 Here it is, mortar "Pumhard" of the Military History Museum of Vienna. It is clearly seen that it is made of two layers of iron. The inner layer is made of strips laid along, the outer layer is made of rings attached to it, that is, located across. They put on the outer rings in a heated state, so that when they cooled down, they tightened the barrel, giving it greater strength. 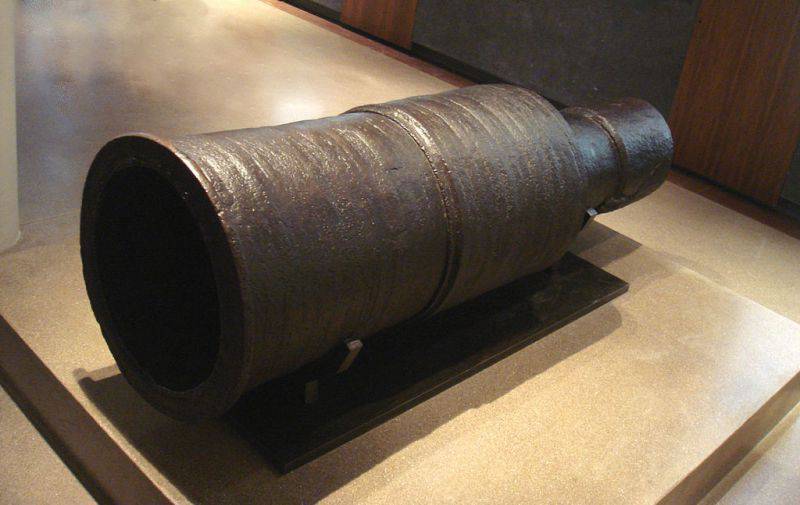 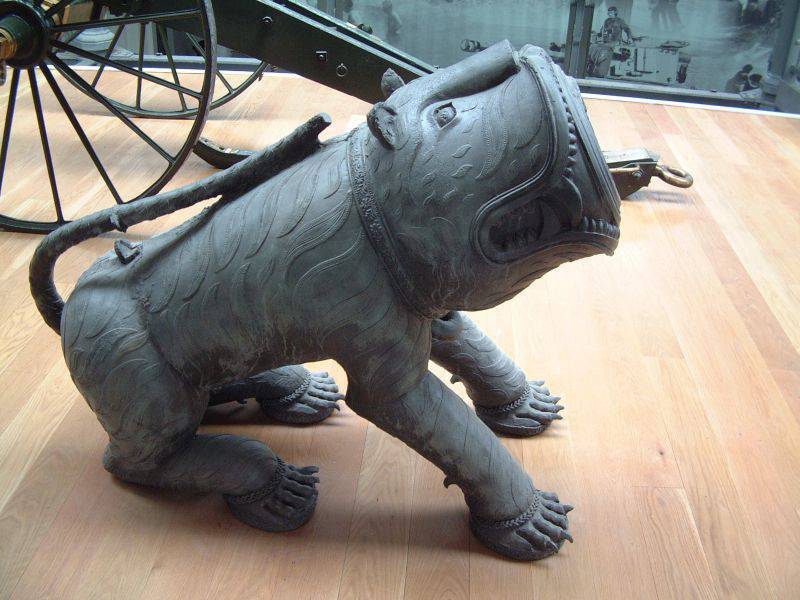 Then mortars were cast from a special copper alloy. And the imagination of some of the masters of the casting possibilities was so cleared that such samples as this eighteenth-century mortar made in India for Tipu-Sultan (“The Tiger of the Garbage”), which is today in the Royal Artillery Museum in Woolwich, England, appeared. . 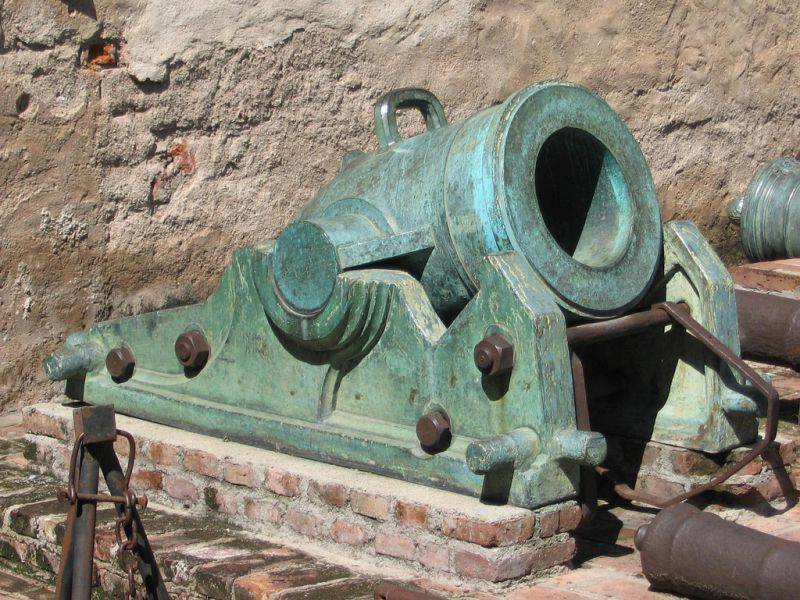 Spanish mortar on a metal carriage of the 18th century in the Historical Museum of Cordoba in Argentina also looks quite "modern". 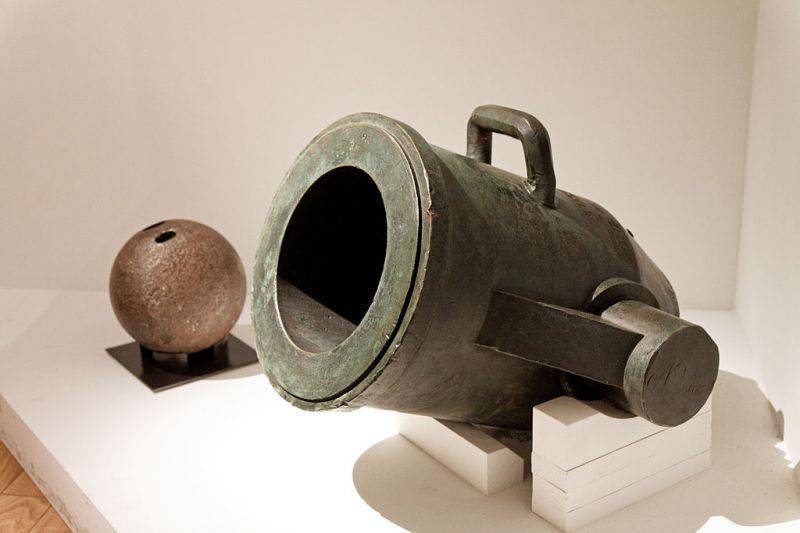 The French mortar 1828 of the year was also cast in bronze. 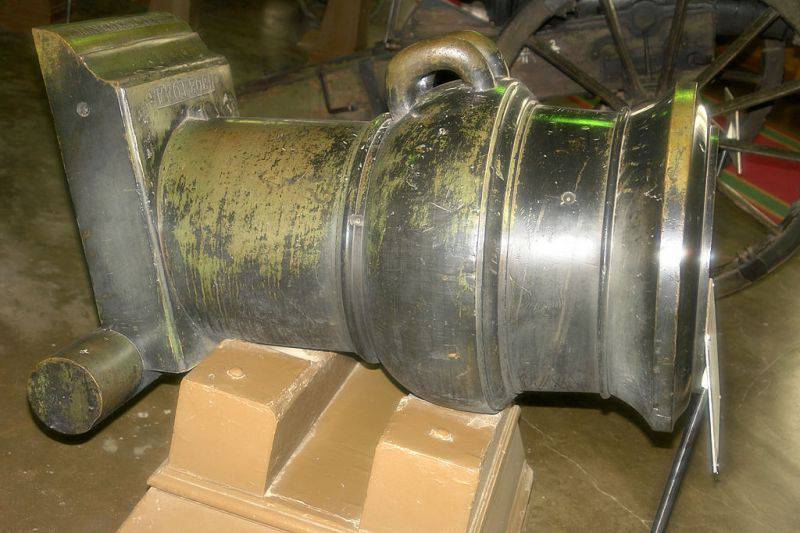 And this is our Russian 335-mm mortar1805 of the Artillery Museum in St. Petersburg. 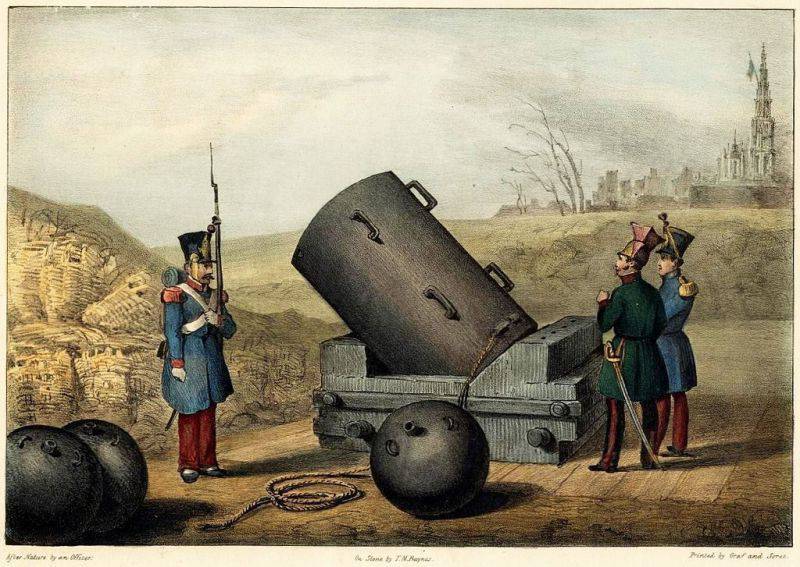 A completely monstrous mortar used in the siege of Antwerp in 1832, the design of Henri-Joseph Peksan. 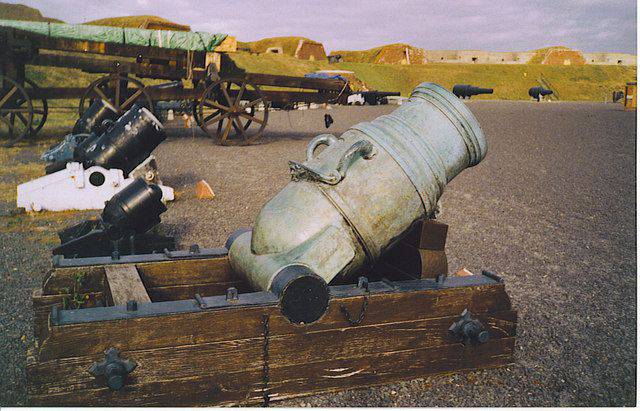 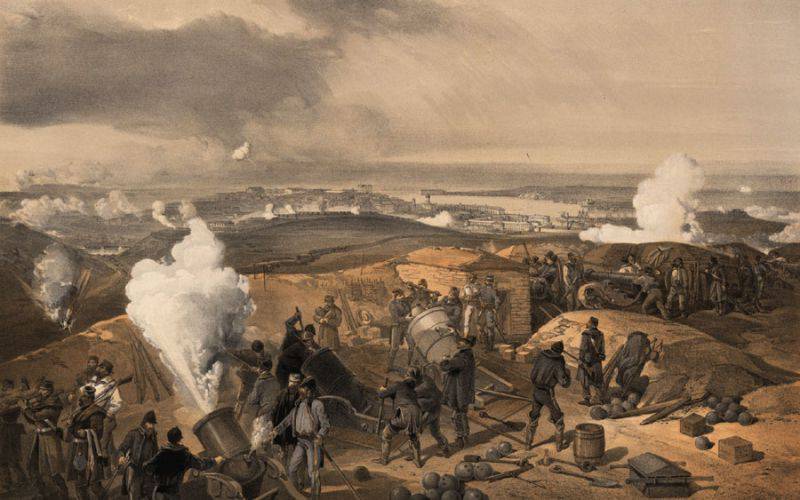 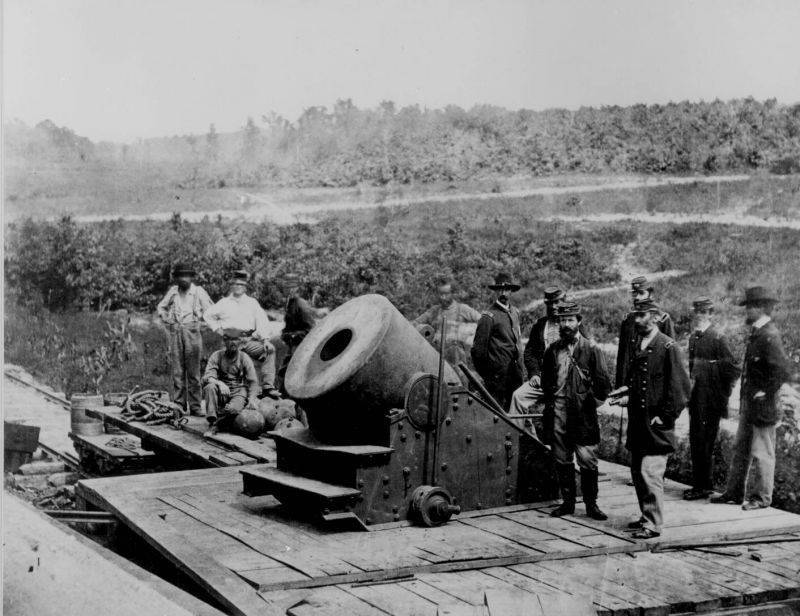 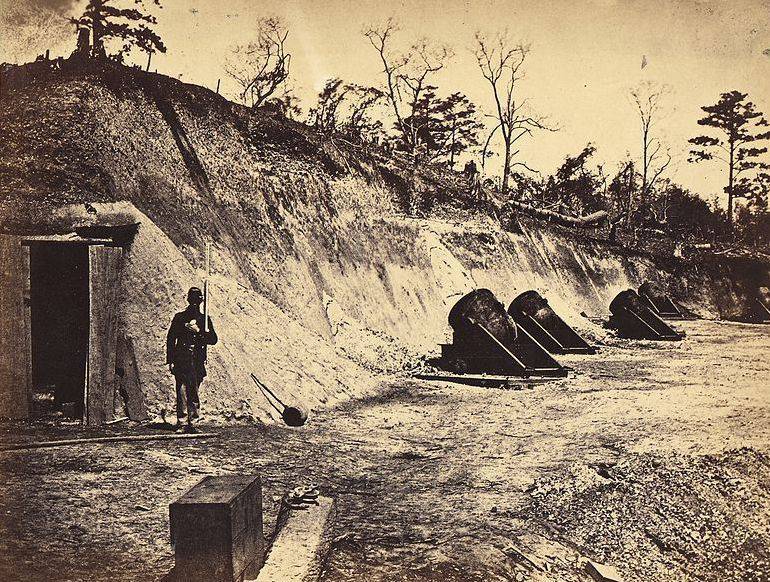 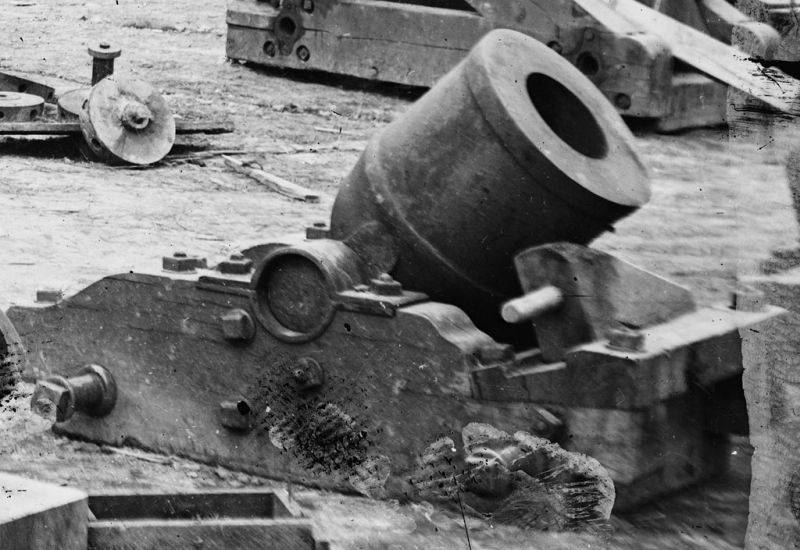 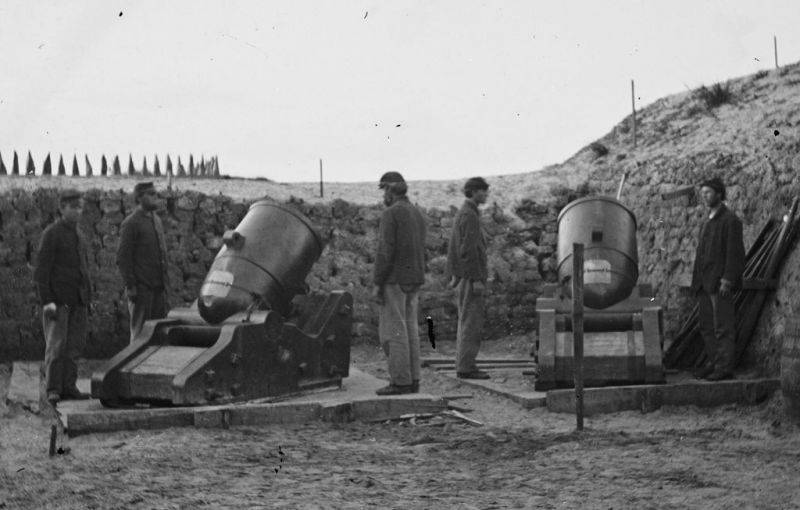 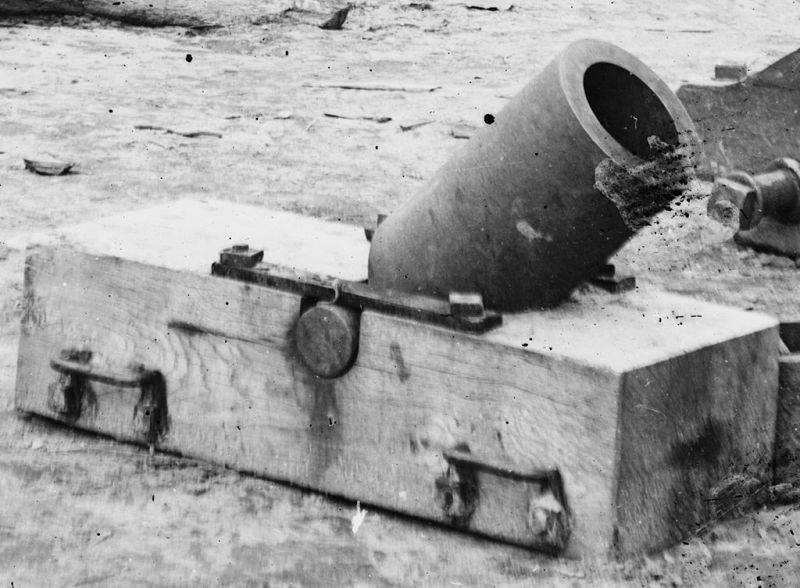 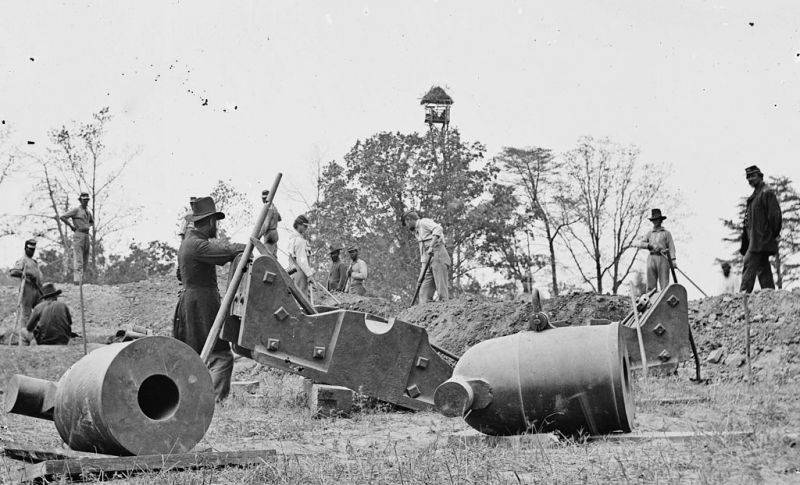 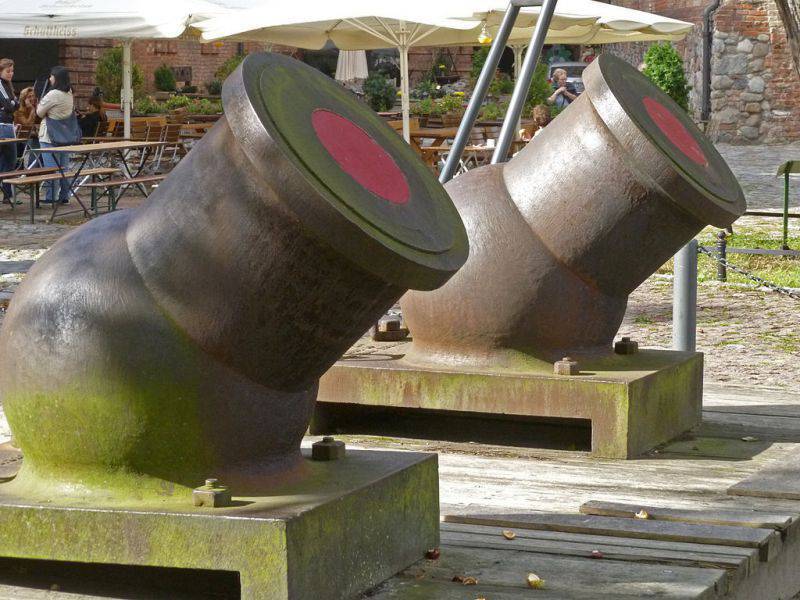 Interestingly, these German mortars, exhibited in the citadel of the Spandau fortress, do not have any tools for raising the trunk, as they are cast together with the carriage, like Tipu-Sultan's tool. Obviously, the range was adjusted by changing the charge. 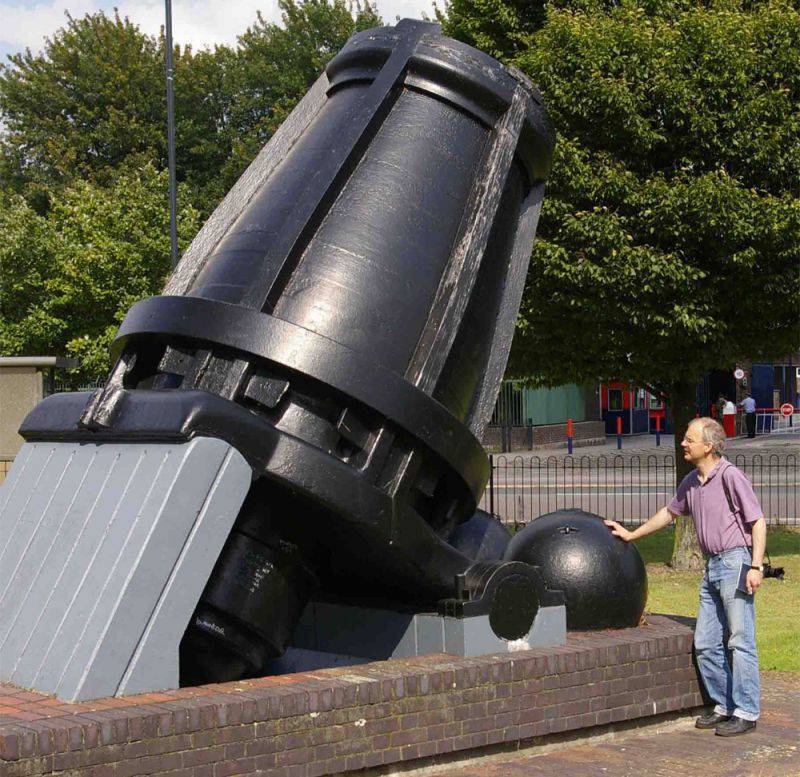 London, Woolwich, Greenhill Terrace: Malnira 1854's unique mortar of the year, which had a caliber ... 920-mm!

Plate on Mallet's mortar. As you can see, she successfully shot 19 times! But not fought! 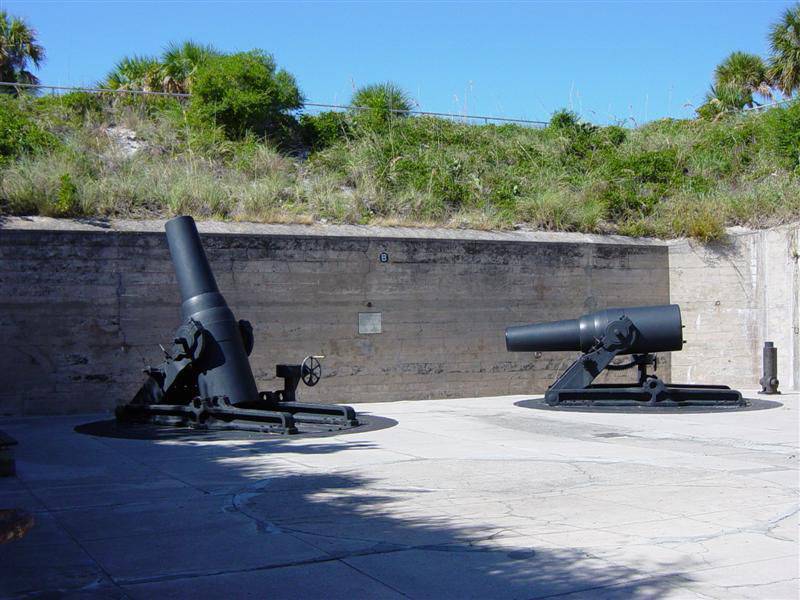 Then rifled mortars appeared, and the same Americans thought of using them against the fleet. The 305-mm mortars of the 1890 sample of the year were located in such mortar pits, which were absolutely impossible to hit with table fire from ships! Fort Desoto, Florida. 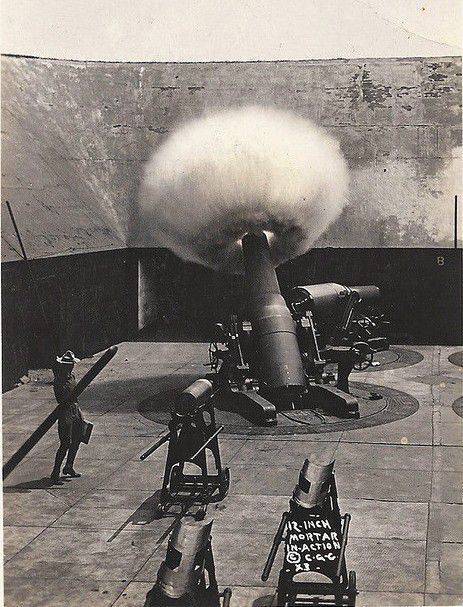