Overview of the Air Force of Turkey. Step back 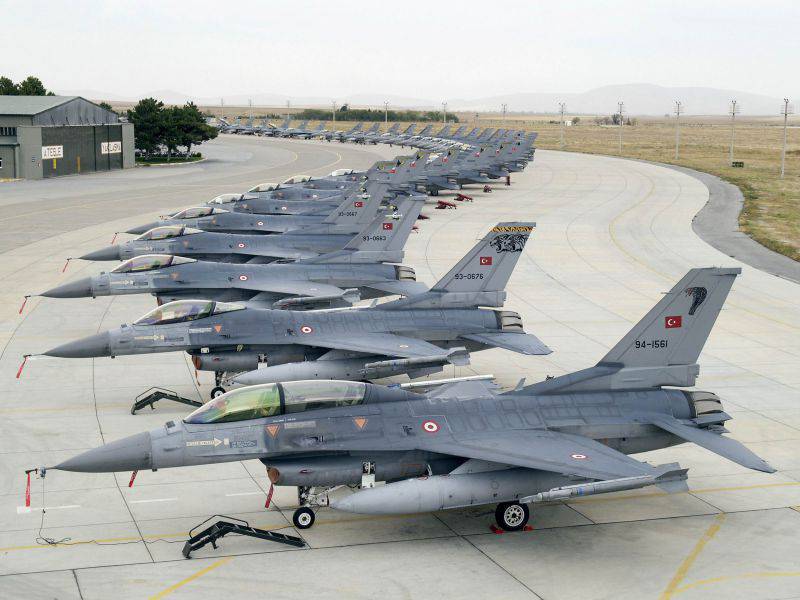 than a prostitute friend (Turkish saying)

The most numerous and aggressive air forces in the region. Downed Russian bomber and 1 thousand. 306 violations of the airspace of Greece for the eight months of this year.

The eternal confrontation between the Turks and the Greeks does not cancel the fact of the membership of both in the North Atlantic Alliance. Turkey is one of the oldest members of the NATO bloc (older than Germany and Spain), actively supporting any directives and programs of the Alliance. The Turks are given priority in acquiring the latest weapons. The Americans put them in a queue for the purchase of F-35 fighters, armed the Turks with drone-mounted, suspended sighting containers and JSOW planning bombs.

The stronghold of the US Air Force in the region is located in Turkey - the legendary airbase Injirlik with a storage facility for nuclear weapons.

What are the air forces of Turkey?

Record 9-hour combat missions of Turkish F-16 during the NATO operation against Yugoslavia. Night strikes on Iraq using high-precision Mavrick and Israeli Popeye missiles. Flight operations under the Baltic Air Police (2006) program. And now - an incident with the Russian Su-24. 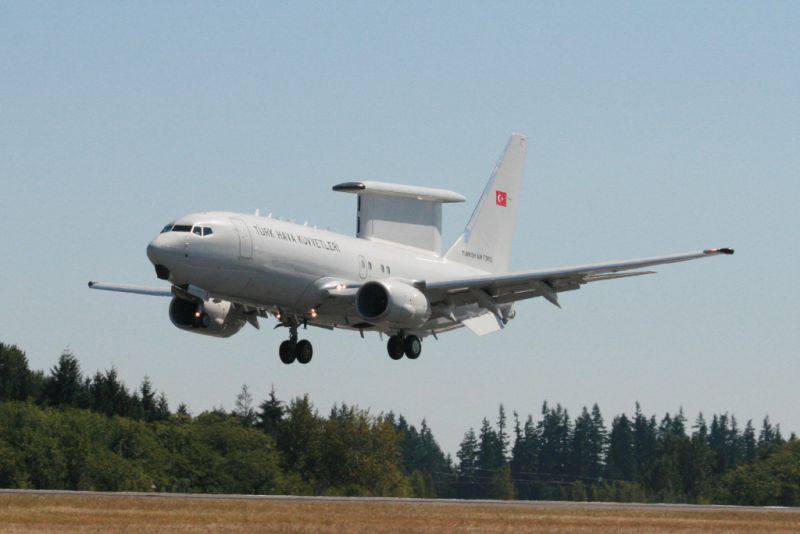 Just a dove of peace. Airborne Early Warning and Control Aircraft (AWACS), eyes and ears aviation groupings. Created on the basis of the passenger Boeing. In the crest above the fuselage is a MESA radar with an active AFAR capable of controlling airspace within a radius of 600 km, including detect a target like “fighter” at a distance of 370 km, and a ship the size of a frigate - up to 240 km. The radio interception equipment on board allows detecting enemy radar radiation at a range of 850 km. “Peaceful Eagle” is capable of simultaneously tracking up to 180 targets, directing 24 fighters at them.

There is an in-flight refueling system. 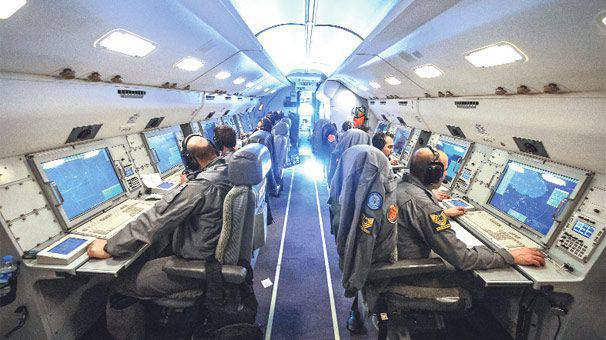 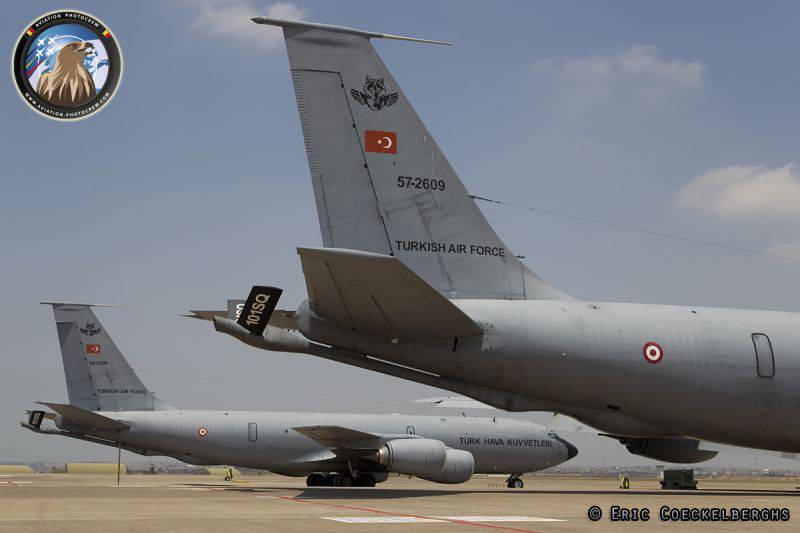 Flying tanker on the basis of the passenger “Boeing-707”. Max. fuel capacity - 92 tons with take-off weight of 146 tons. Refueling is performed using a controlled telescopic rod. The use of a rigid rod allows you to double the pressure and performance of the system (compared with the domestic scheme “hose-cone”), reducing the refueling time and facilitating its process. The pilot is left to follow the tanker, the operator on board the Stratotanker will do the rest. 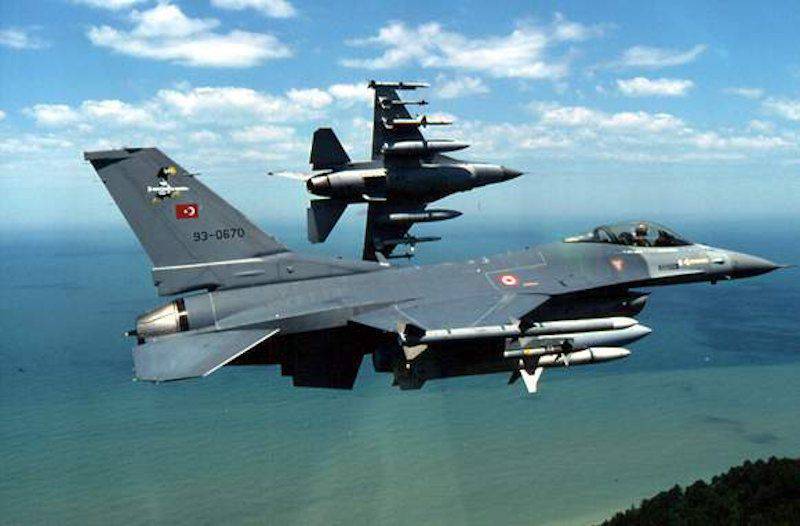 The two-seater F-16D, in addition to solving fighter and strike missions, can be used as a training aircraft. 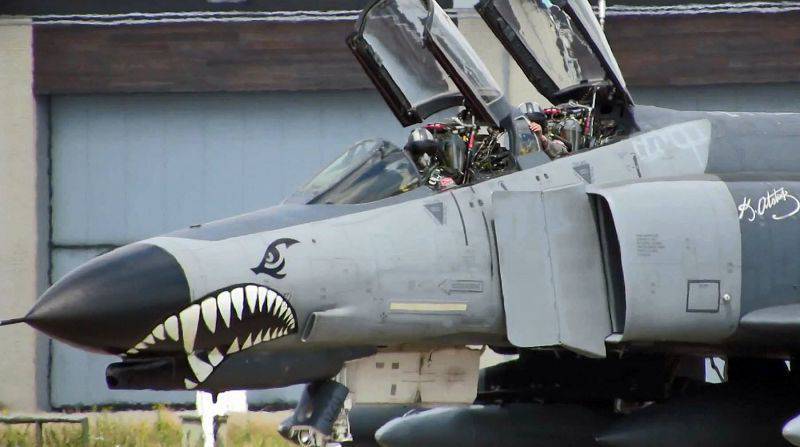 Forward to the past or back to the future. Fighter-bomber "Phantom", brought by Israeli experts to the modern level. From the old F-4E remained only the name and fuselage, as well as the characteristic, upward curved parts of the wing. Replaced all hydraulics and 20 km wiring. Installed modern navigation, communications and data exchange. Instead of arrow pointers in the cockpit - multifunctional displays. To solve percussion tasks at any time of day, the Turkish “Terminator” is equipped with an Israeli Elta EL / M-2032 radar and a suspended lightning container with IR cameras, laser range finders and target tracking sensors. For electronic suppression of anti-aircraft missile heads, the Elta EL / L-8222 active jamming system was incorporated into the avionics.

Taking into account the hurricane thrust and with the armament operator in the crew, the 20-ton “Terminator”, when operating on a regional theater of operations, will compete with any modern tactical bombers (F-15E, Su-34, etc.)

With its outdated aerodynamic design, the Phantom is pointless to get involved in close combat with the 4 generation fighter jets. But, with modern avionics and air-to-air missiles, the F-4E Terminator 2020 still poses a threat at great distances.

For the “advanced” training of pilots in the Turkish Air Force, there are 23 supersonic training aircraft F-5F / E “Tiger” and 67 T-38 “Talon”. According to its characteristics and purpose correspond to domestic Yak-130. If necessary, all of them (first of all - the Tiger multipurpose fighter with combat aircraft avionics) can be involved in solving shock tasks during daylight hours. 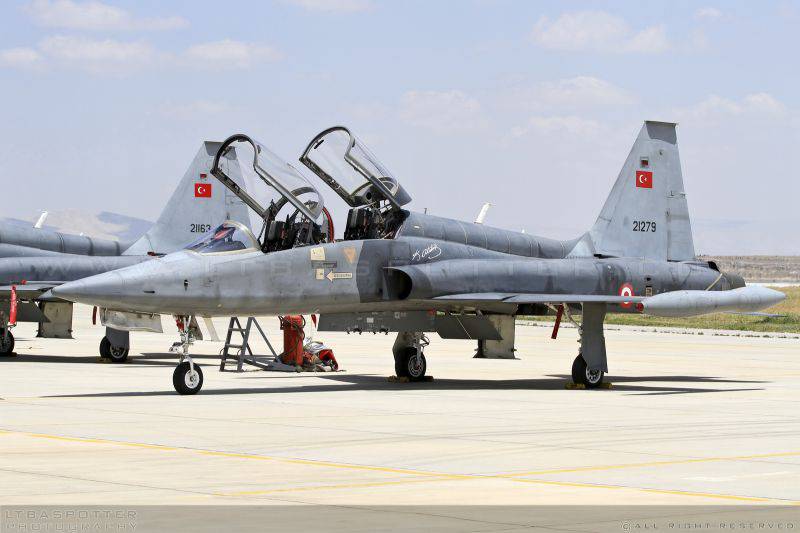 Two air command posts and a transponder on the basis of Gulfstream passenger business jets.

4 unmanned reconnaissance aircraft RQ-1 “Predator” (leased from the US). UAV take-off weight of about one ton. The duration of the patrol 24 hours.

It also reported on the presence in the Air Force of a certain number (within a couple dozen) of UAVs made in Turkey (“Anka”, “Bayraktar”) with a max. take-off weight 650 - 1600 kg.

In connection with the US refusal to transfer shock drones (MQ-9 “Reaper”), the efforts of the Turkish military-industrial complex are developing their own attack drone based on the large TAI Anka.

Species reconnaissance satellite “Göktürk-2”, launched from the Chinese space center in December 2012. The satellite is in low earth orbit at an altitude of 680 km. Max. The resolution of images of the Earth’s surface is 2 meters.

By now, a second similar satellite is being prepared for launch. The launch of the third (“Göktürk-1”), whose equipment would allow to conduct reconnaissance with the 0,8 resolution of the meter, was temporarily postponed due to delays in the delivery of imported equipment.

In 2013, the Turkish company Roketsan started the creation of its own space rocket center. In 2015, Rockettsan cooperation with the State Space Agency of Ukraine was announced with the goal of acquiring technologies for creating a rocket and space complex in Turkey.

Almost 300 combat aircraft with competent support on all informational and technical issues (air bases, AWACS, reconnaissance, air tankers). But, despite its apparent multiplicity and a number of models of modern weapons, the Turkish Air Force grouping remains a secondary formation with limited capabilities. High society trash. Scraps from the American and Israeli tables.

First, the Turks did not have enough money to purchase full-fledged fighters to gain air supremacy - the F-15 level. Attempts to conduct an air war with the forces of some Sokolov are doomed: the small F-16 will not stand the bout with the professionals. Despite the noticeable “from block to block” progress in aerodynamics, the single-killer fighter is still poorly controlled at high angles of attack. And its radar is too primitive and weak for rivalry with the “Irbis” of the domestic “Drying”.

The purpose of the F-16 as a fighter is to take a crap from around the corner and shoot at unarmed / single targets in obviously favorable conditions (the presence of an AWACS - in the absence of it from the enemy).

At the same time, it is worthwhile to give him his due - as a “drummer,” he is magnificent. In general, a good light class fighter-bomber, losing a fair amount of its potential in the absence of nearby “older brothers” (F-15 and “Raptor”).

Technique of the future? About heavy percussion drone not talking even in the long term.

Finally, the presence in service 40-year “Phantoms”. And let their aiming devices be brought up to the level of modern aircraft, often surpassing the latter. The mere fact of having such a “retro” does not do credit to a country claiming its far-reaching ambitions.

At the same time, it is impossible not to note the continuous process of improving the Ottoman Air Force. Acquisition weapons and avionics from leading manufacturers. Create your own high-class samples of high-precision ammunition. It is reported that at the beginning of the next decade, “Phantoms” will be replaced by the newest F-35. Turkey will have its own launch site and a light-class launch vehicle for launching satellites into low near-earth orbits. 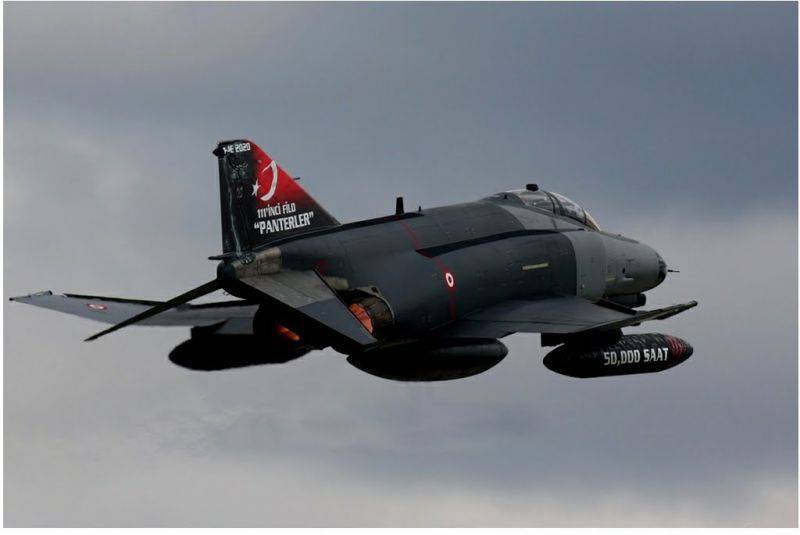