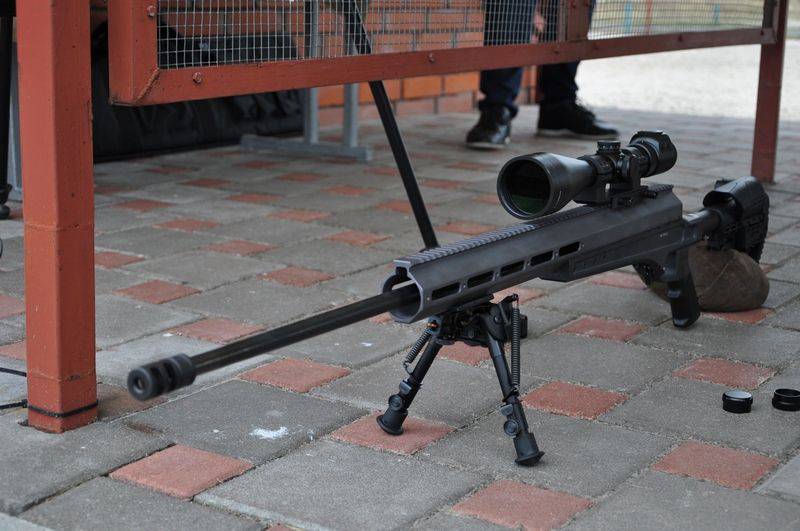 Specialists of the state enterprise "Ukroboronservis" developed a new sniper rifle VM MP-UOS. In fact, this is a deep modernization of the well-known Mosin rifle caliber 7,62 millimeter sample 1891 / 1930 of Soviet production.

It should be noted that the company "Ukroboronservis" announced the creation of a new model of small weapons in its advertising brochure back in September of this year. A demonstration of the prototype was held on November 13 2015 of the year. In order to demonstrate the capabilities of the new development, demonstration shooting was conducted at the National Guard under in New Petrovtsy.

Ukrainian gunsmiths improved these weapons in accordance with NATO standards to further equip the police and National Guard units.

A new sniper rifle designed for the cartridge 7,62x54 millimeter, has a barrel length of 730 millimeters. Its rate of fire reaches 20 shots per minute. Cartridges are fed from a box magazine with 5 or 10 cartridges. The rifle VM MP-UOS is equipped with an optical sight and folding telescopic bipod of Harris SBR. During the modernization, the firing range was increased and the recoil was reduced when shooting, which, according to the developers, is practically not felt in the new weapon. In addition, due to the use of a silencer, the sound of the shot is significantly reduced, so the rifle can be used covertly.

As part of refitting the Mosin rifle, other changes were made to its design. So, in particular, the butt and wooden box are replaced by a new one, which is made of polymeric materials and aluminum alloy, as well as an adjustable butt and pistol grip. The permanent store was replaced with a box-shaped detachable store with a single-row arrangement of cartridges. To install the muffler or muzzle brake-compensator on the muzzle of the barrel provides a thread.

As reported in the press service of the state enterprise "Ukroboronservis", all components and parts that are used to upgrade the rifle, exclusively Ukrainian production. In addition, it was stated that the possibility of manufacturing these weapons for export is not excluded.

Already, according to the tradition that has emerged recently, a new Ukrainian development was met on the Internet by heated discussion. The novelty was ridiculed, they say, the new development turned out to be “pre-revolutionary Mosinka”. However, there were also sensible people who critically approached the evaluation of the work of the Ukrainian gunsmiths, noting all the positive and negative sides of the VM MP-UOS rifle.

Among the “pluses”, the following was noted: Mosin rifles in the warehouses of the Ministry of Defense of Ukraine are quite a lot, so the components will be very cheap. In addition, there is no doubt and reliability of the design. A good butt, body kit and a suspended trunk improves shooting accuracy, which is a huge advantage among similar types of weapons.

At the same time, critics point out certain negative sides. So, in particular, in Ukraine they do not produce high-quality cartridges of the required caliber. The big problem is that the lion's share of Mosin rifles stored in military warehouses is worn out, so it will be difficult to find quality barrels. In addition, the trigger and bolt do not meet the standards of sniper weapons. All these “minuses” may ultimately lead to the fact that upgrading an old Mosin rifle into a new VM MP-UOS rifle can be too expensive, and the new development can catch up with the cost of a Remington 700 Police rifle.

At the present time, it is not possible to assert that the new Ukrainian development will go into service with the Armed Forces of Ukraine. It is possible that there will be new improvements and improvements ahead, but we can already say that such a model has the opportunity to occupy its own niche.

Ctrl Enter
Noticed oshЫbku Highlight text and press. Ctrl + Enter
We are
Sniper fire in local warsWhat should be a modern sniper (part of 1)
63 comments
Information
Dear reader, to leave comments on the publication, you must to register.