November 30 2015
20
Europeans are known for disregarding their own stories and traditions. At the end of the 19 century, the entire civilized world began to admire the exotic jujutsu, forgetting about European - in particular, the German wrestling traditions. And this is taking into account the martial arts textbooks that appeared in Europe already in the 15 century. But nowadays enthusiasts have emerged who take on the revival of medieval military traditions. One of them is Sergey Viktorovich Mishenev: General Director of the International Academy of Fencing Arts, senior teacher of fencing at St. Petersburg State University. 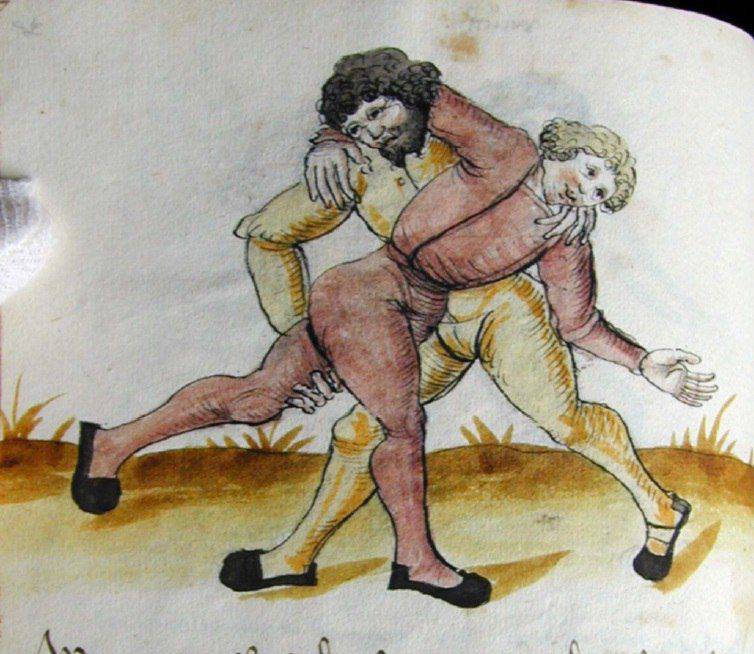 The medieval German school of unarmed combat, based on the treatise of 1539, by the master Fabian von Auerswald, with the involvement of the techniques of Talgofer, Dürer (Ott), Lichtenauer, Meyer.

Our school is, first of all, a reconstruction, and it is interesting to us as an ancient martial art. Therefore, we chose the statement of Auerswald himself as his motto, which he quoted in his textbook: “Do not betray a good comrade with courage or struggle!”


3. The origins (beginning) of the direction (when and who founded)

The origins of the German medieval struggle should be sought in the urban traditions of the common people. It is known that already in the XIII century, in the German lands, tournaments of citizens were held, in which the unarmed struggle was very popular. Subsequently, this art began to spread among the knightly class. Auerswald himself, who served as a master of wrestling at the court of the Elector of Saxony, Johann-Friedrich, writes that he studied under various masters, whom his predecessor Johann-Friedrich, Duke Ernst of Saxony, invited to his court.

Since the 14th century, practically in all German fencing treatises such disciplines as the longsword, dusack and dagger necessarily coexist with unarmed self-defense against an armed opponent and struggle.

Our Academy specializes in classical and historical fencing. And since, in the historical tradition, medieval fencing and wrestling went hand in hand, I decided to introduce this discipline into our training classes.

For the reconstruction of medieval wrestling, I drew one of the teachers of the Academy Roman Forostovsky. The novel is not by hearsay familiar with the subject - in his youth he was a free-style wrestling champion of Leningrad. That is why his experience, his vision and methodological equipment are key in the process of recovering techniques.

Actually, this very process of recovery is not something simultaneous. We are now collecting a group of the first year of study, not so much as a group of students, but as a group of like-minded people. Our class of medieval wrestling will be a kind of workshop, a creative laboratory in which all students will become co-authors of a unique and interesting process - the process of recreating the ancient single combat. 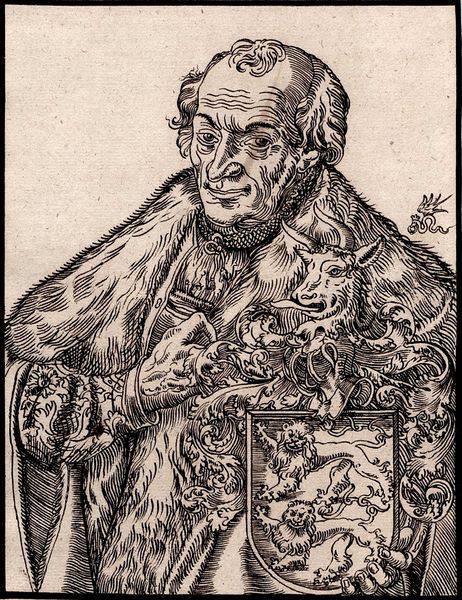 All the activities of our Academy are not focused on the idea of ​​a goal, but on the idea of ​​a path. That is, the process of occupation, the process of initiation, cognition, disclosure and, ultimately, the filling of life with interest, for us is paramount. However, of course, the struggle, as well as any single combat, implies the ideals of victory and, consequently, the desire for sport battles. Therefore, each student, in principle, can choose their own goal, their own meaning of employment. For some, victories on the carpet will be such a meaning, and for others - the individual path of a medieval warrior and the pleasure of a sense of communion with a historical rarity.

As I said, for the reconstruction of the medieval struggle, I drew our specialist Roman Forostovsky. Roman devoted many years to the art of wrestling, training in the Soviet sports school. Therefore, the main methodology for our wrestlers will be the Soviet free-style method. We will use the entire traditional arsenal of our wrestlers - gymnastics, special acrobatics, exercises in pairs, game training. But, besides this, we are looking for exercises from antiquity, which can diversify our approaches and give the greatest color to the lessons. For example, Fabian von Auerswald shows an exercise in which a wrestler with one foot is standing in a hole, and the task of the enemy is to push him out of this hole. Historical chronicles have saved quite a few such exercises, and we will search and use them. 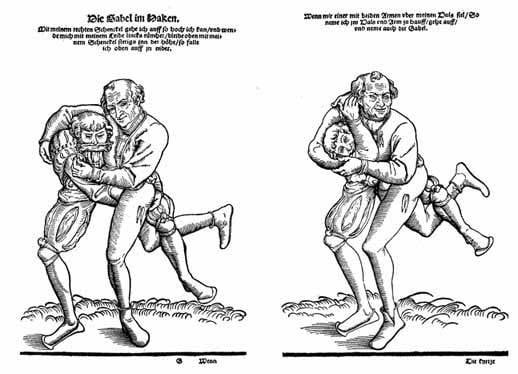 Illustrations from the treatise von Auerswald

For medieval unarmed martial arts are characterized, above all, wrestling techniques, with a large number of grips for the legs and leverage. At the same time, very harsh melee techniques were used in the most tough forms of combat - effects on the eyes and nose, finger fractures ... Textbooks do not lead to such tricks, but their descriptions are often found in various medieval texts.

According to my observations, tactics in medieval martial arts (as with weapons, and without it) was not very developed. Most authors (including Auerswald) do not write about it at all. The main tactical motive in those days was the motive of continuous dominant initiative. This simple move is mentioned in the fencing textbooks of that time.

The most serious question of tactics, or, more correctly, some tactical and psychological qualities was worked out by the Italian author Fiore dei Liberi. In his treatise at the turn of the 14th - 15th centuries, there are images of four animals, the qualities of which were to serve the master of battle as a basis for imitation. These animals are the elephant, personifying power; the lynx is a symbol of quickness, the lion is courage and the wolf is an exact calculation. It is around these "four whales" that we will build our work.

Free fights are an important part of training a fighter. At the heart of the rules we will use the rules of wrestling. But in the future, perhaps, we will develop our own, taking into account medieval traditions.

Physical training (the elephant motif of Fiore de Liberi) is the most important basis for the development of a wrestler. Basically, we practice exercises with our weight, as well as with the weight of a partner. Weights are a good tool for training all muscle groups. In the future, we plan to use burdens that are close to the authentic old ones. For example, sandbags. 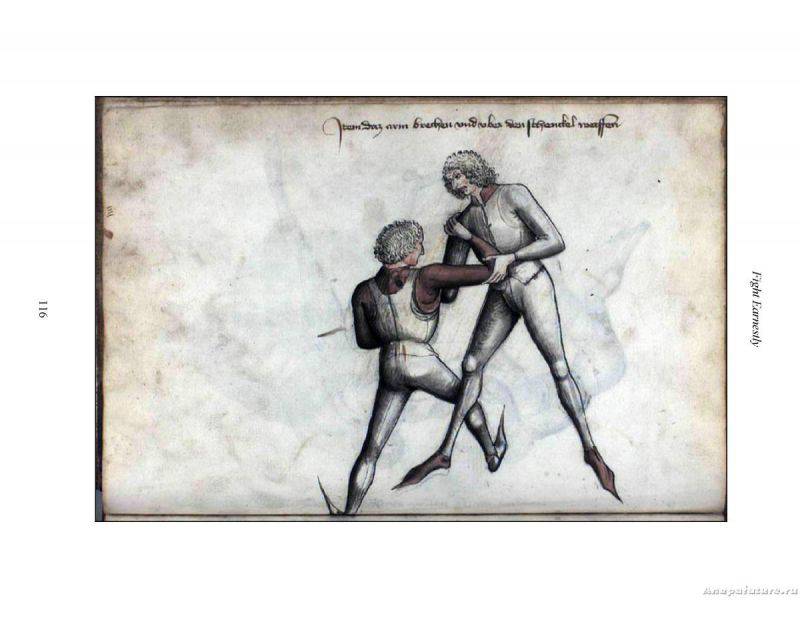 Work against the group is not included in Fabian's treatise. However, this is a very good exercise for the development of spatial vision, orientation and other important qualities for wrestlers. It is in the form of an additional exercise that such an element can be used in our workouts.

But this section is very popular in medieval treatises. Fabian has no such methods, but they are widely represented in many other fencing wrestling atlases. The main weapon of the attacker, in this case, is a dagger. And opposition to a fighter with a dagger for a medieval fighter and swordsman was the most common skill.

Directly among medieval authors such a motive is poorly represented.

All of the above, I would refer to additional exercises (as well as work against the group). Exercises in the dark, for example, and even with closed eyes, we have been using for a long time in the process of learning fencing. But the dog is probably not our case. After reading this question, I remembered just one medieval battle that went down in history as the Dog of Montargis ... It happened on October 8 of the year 1371. It was then that a certain Macher was convicted of the murder of the knight Orbi de Mondidier. Since de Mondidier himself could not take part in the duel, the judges put his dog named Hercules instead. In a short duel, Hercules defeated his opponent, who finally admitted that he had really killed de Mondidier.

The psychological preparation of a fighter in the Middle Ages was different from modern sports methods. The main spiritual tool in those days was faith. To reproduce a full-fledged medieval religious ecstasy in our day is hardly possible, however, we plan, at least in theory, to tell our students about the spiritual practices and exercises of those centuries. Who has enough enthusiasm and leisure, will be able to endure and use something for themselves.

I repeat - the main goal and the main intended effect of our classes is to join the historical phenomenon, filling life with interest. That is, as it is not banal sounds - the organization of leisure. But we all understand that if this leisure consists of medieval wrestling, then other positive components of these activities will not take long to wait: strong muscles, dexterity, courage, applied skills of effective self-defense - these are our expected effects. But there is something that distinguishes our school from school, for example, sambo. Namely - the historical basis. This means that as an additional effect, we expect our students to be fascinated by history, literature, and even the visual arts. That is, those sources on which our reconstruction is built.

The main distinguishing feature of our school is authenticity. Not to say that the full, one hundred percent. Still, we did not take it directly from Auerswald, but we restore it by textbooks. But our claims for accuracy in relation to original sources are very serious. It is in the exact restoration of the German medieval struggle that I see our mission.

17. Use in life (a case of self-defense, when the student was able to protect himself in this area)

18. Did the Germans themselves remember about their methods of struggle in this or past centuries?

- It is known that in the 1943 year, special purpose SS units were created in Germany. These special forces were headed by SS Hauptschturmführer Otto Skorzeny, who, by the way, was himself a well-known swordsman (in his youth he spent 15 duels on cold weapons). So, hand-to-hand combat, including with the use of a dagger, these units were trained in medieval German treatises. According to Peter Kozy, the order to use the treatises was given personally by Adolf Hitler.

After some time, the same idea was adopted by British sabotage special forces.