There was an opportunity to talk about another flint pistol of Russian production, which was in service with the Russian army, as well as show various photos of this weapons. This time it is the Russian cavalry flintlock pistol of the lower ranks of the 1839 model of the year. The site HistoryPistols.ru previously told about the Russian flint pistol sample 1809 and its variants. The 1839 model gun of the year is essentially an upgrade of this weapon.

The gun consists of a bed, a barrel, a lock, a trigger mechanism and a brass instrument. The total length of the gun 398 mm, weight 1240 grams. 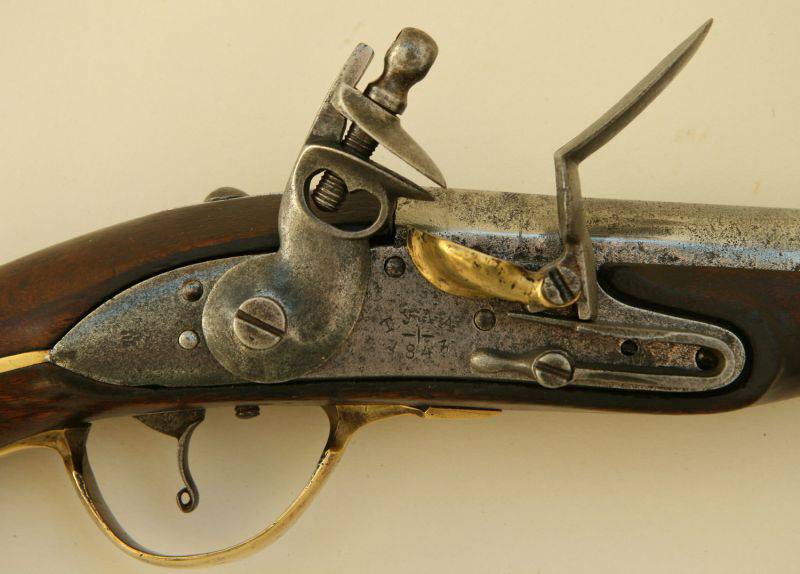 A flintlock is installed on the left side of the box. The powder shelf of the castle is located at a small angle relative to the axial line of the bore. 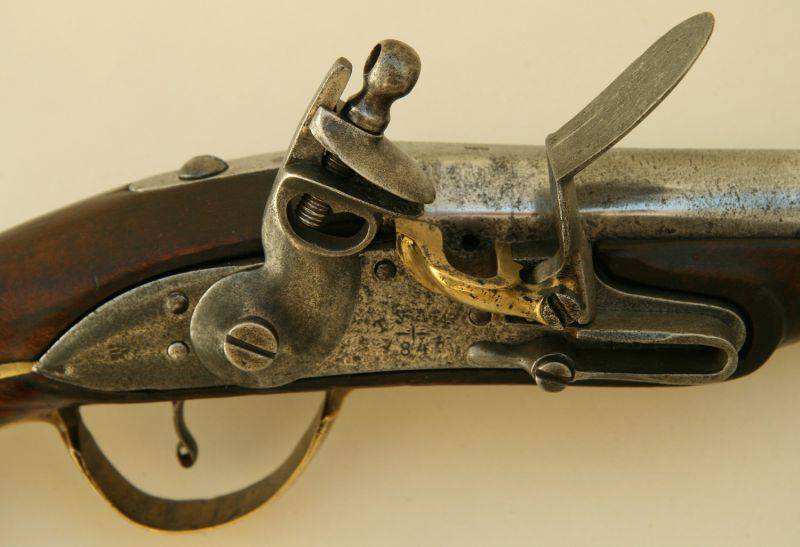 The seed hole is approximately at the level of the upper edge of the powder shelf. 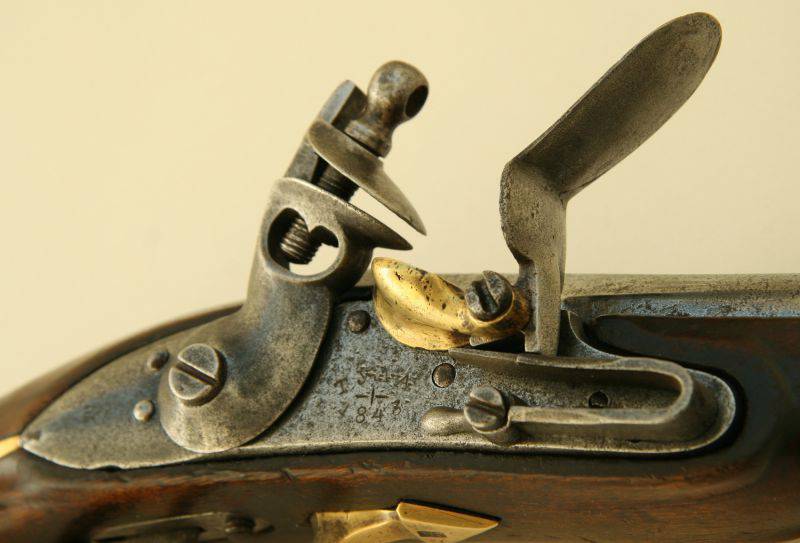 The flintlock keypad is slightly recessed into the surface of the bed.

Barrel pistol cylindrical shape. The outer diameter of the barrel smoothly decreases from the breech to the muzzle. In the breech, the trunk is slightly turned and has an octahedral cross-section with rounded edges. The length of the barrel 245 mm, caliber 18,5 mm.

The pistol bed is made of dark brown wood. In the lower part of the handle there is a brass shank with curved side beams.

Cuts are made in the bed to place the barrel, lock, trigger face, trigger guard and other parts of the device. 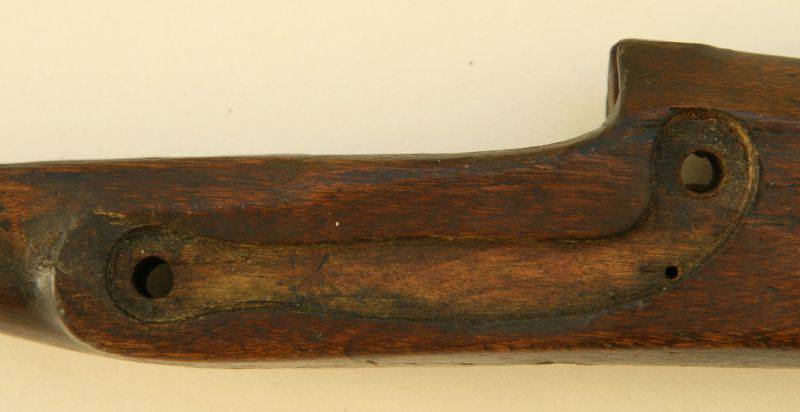 On the left side of the box there is a cutout for the lock mask and holes for the fastening screws of the lock are drilled. 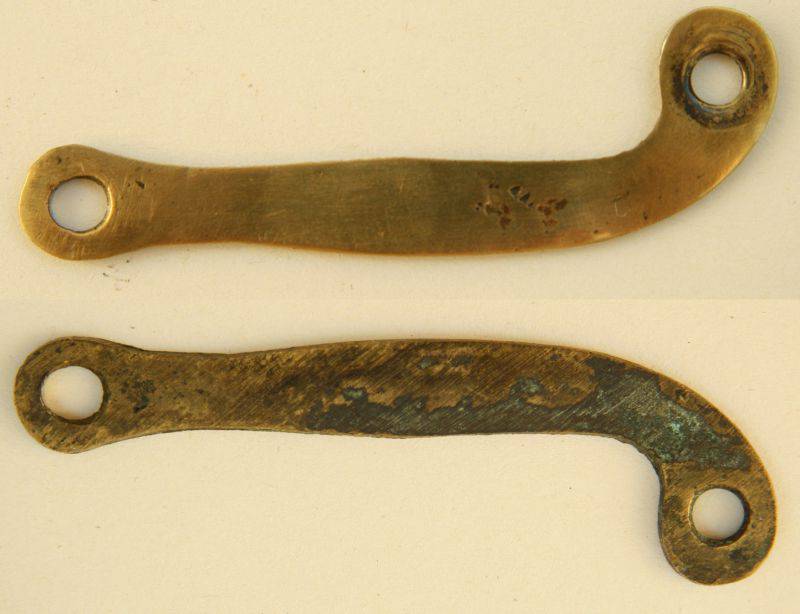 Lock mask is made of brass and has a "G" -shaped shape. The face of the mask is polished, the reverse has traces of rough machining.

On the right side of the box is carved under a flintlock and its protruding parts. 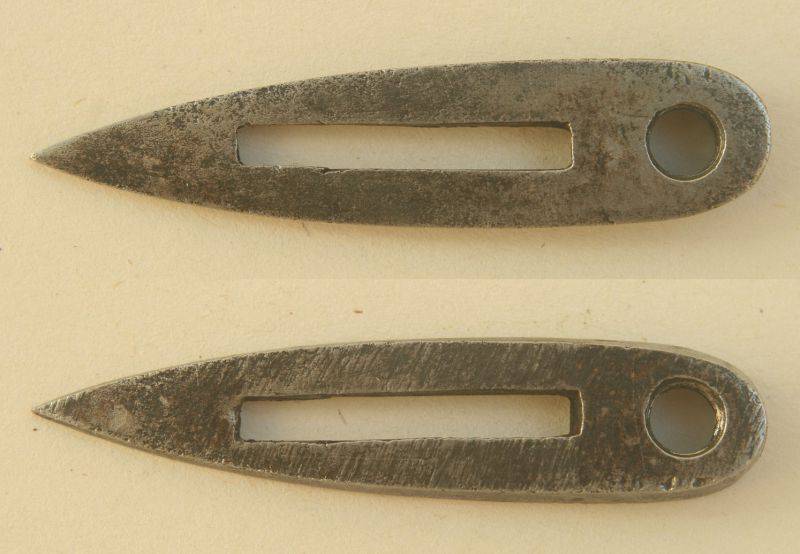 Drop guise of teardrop shape. In the central part of the mask there is a rectangular cutout for placing the trigger. In the front part there is a threaded hole for fastening the screw connecting the tail of the breech screw and the trigger guard. 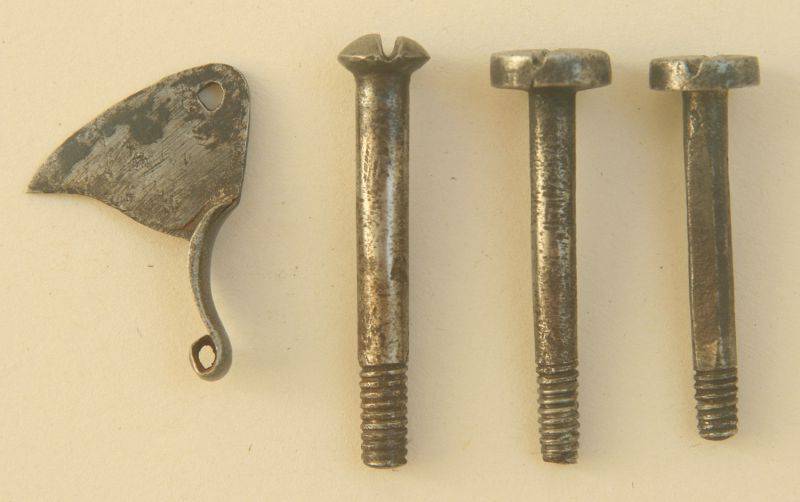 Curved trigger. The needle of the trigger at the end is bent into a ring. The screw for fastening the shank of the breech screw has a semicircular head. Screws fastening the keypad with flat heads. Screws have different lengths. The long screw, in addition to fixing the keypad, is additionally intended for fastening the bounding plate of the forearm tip to the locklock. 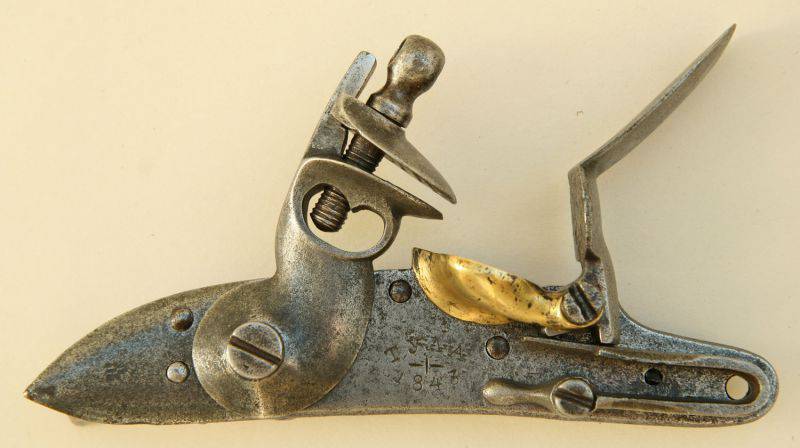 The flintlock mounted on the Russian flint cavalry pistol of the lower ranks of the 1839 model of the year is an ordinary battery lock. On the outside of the keypad, a trigger is installed, a powder shelf with a lid (flint) and a podgivivnaya spring. 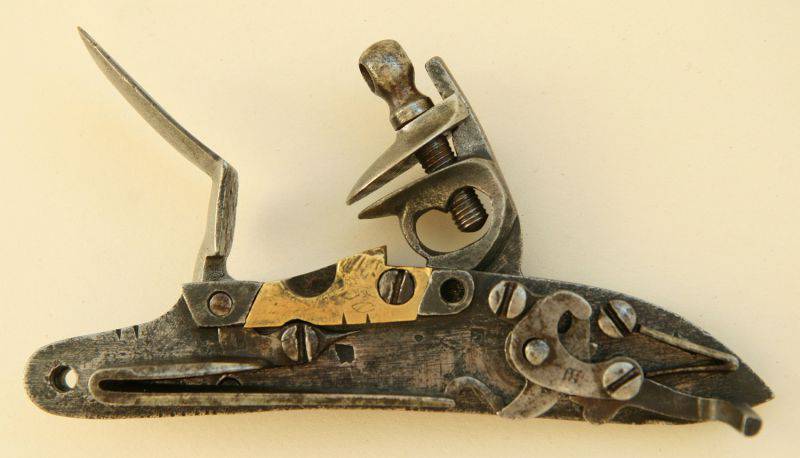 On the inside of the keypad, there is a combat spring, an ankle with a larva and a trigger lever with a spring. 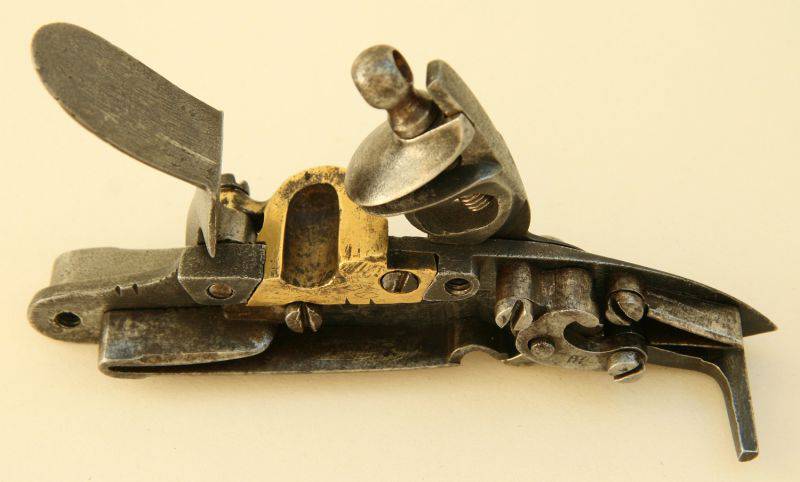 The powder shelf of the lock is brass; it is attached to the keypad with a screw from the inside.

In the front part of the keypad and the rear part of the tide, located behind the powder shelf, there are threaded holes for fastening the lock with screws in the box. 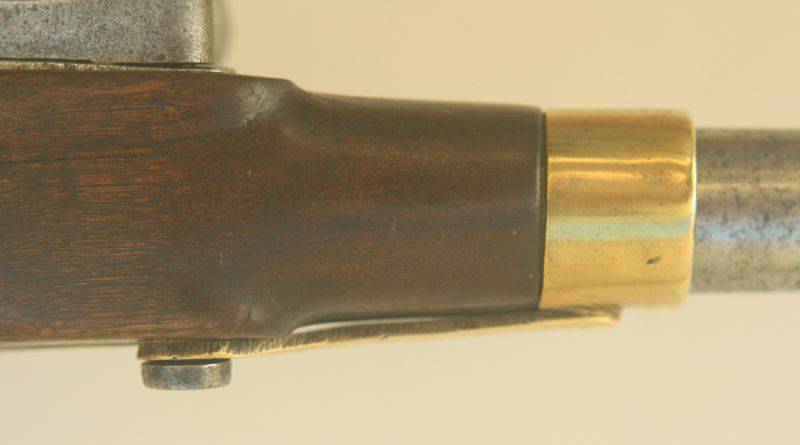 In the front of the box is set brass handpiece, made in the form of a ring. 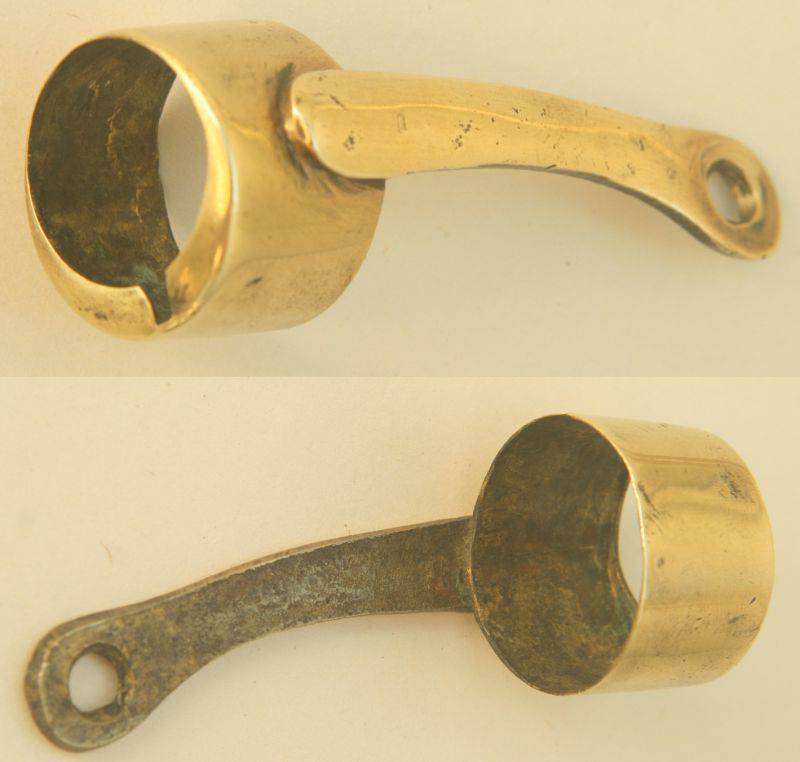 The tip of the forearm secures the trunk to the box and protects the forearm from cracking. On the left side, a restrictive plate is soldered to the tip, which is fastened to the keyhole with a screw. 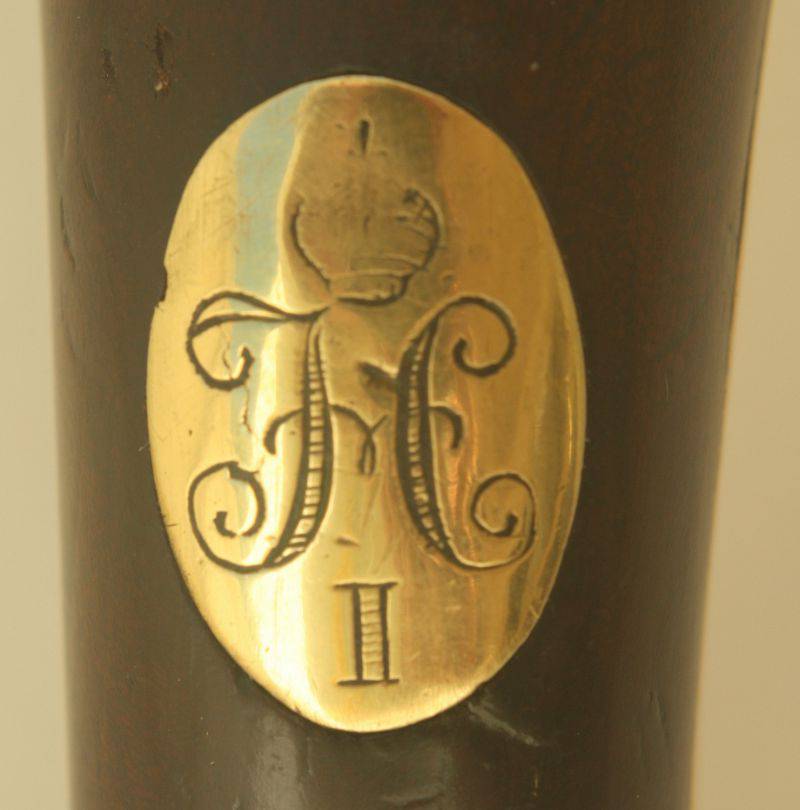 On the back of the bed is placed the guise of mounting the trigger guard screw. 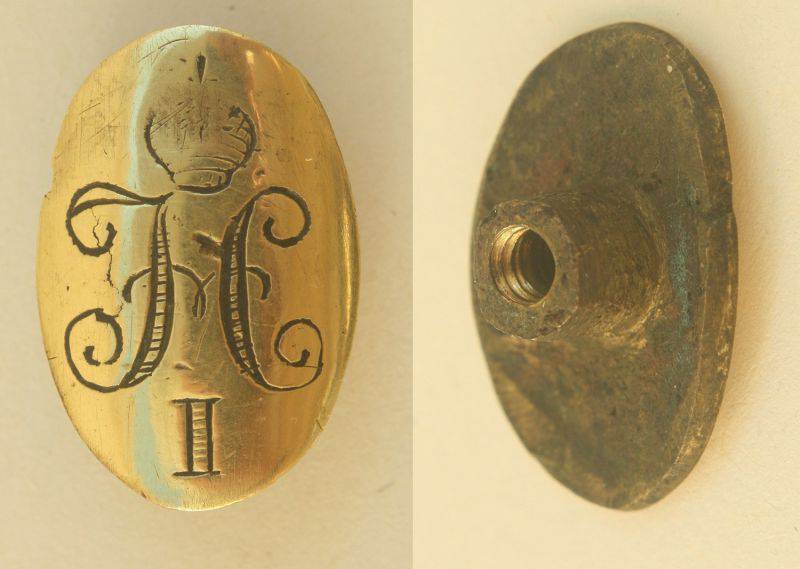 The monogram of Emperor Nicholas 1 is made on the face of the mask. On the back of the mask in the tide made a threaded hole. 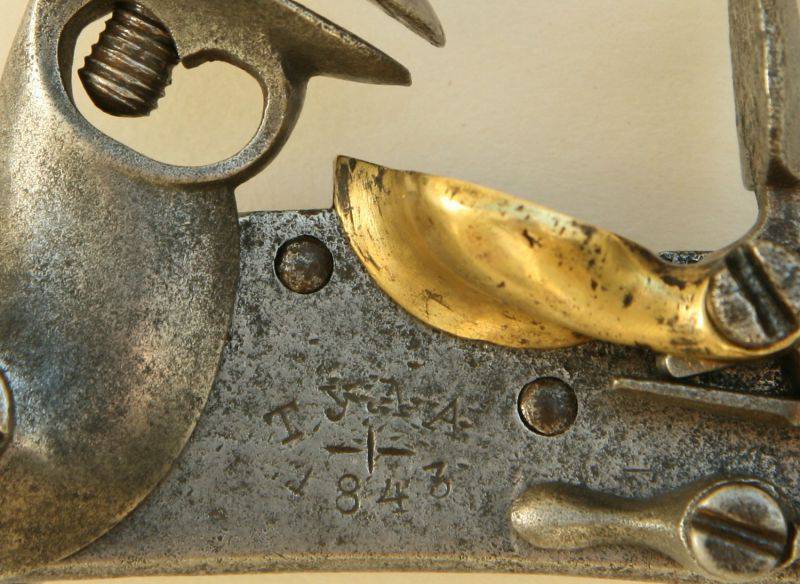 On the surface of the keypad marked in two lines in the form of the stigma of the Tula arms factory with the year of issue of weapons "TULA / 1843". 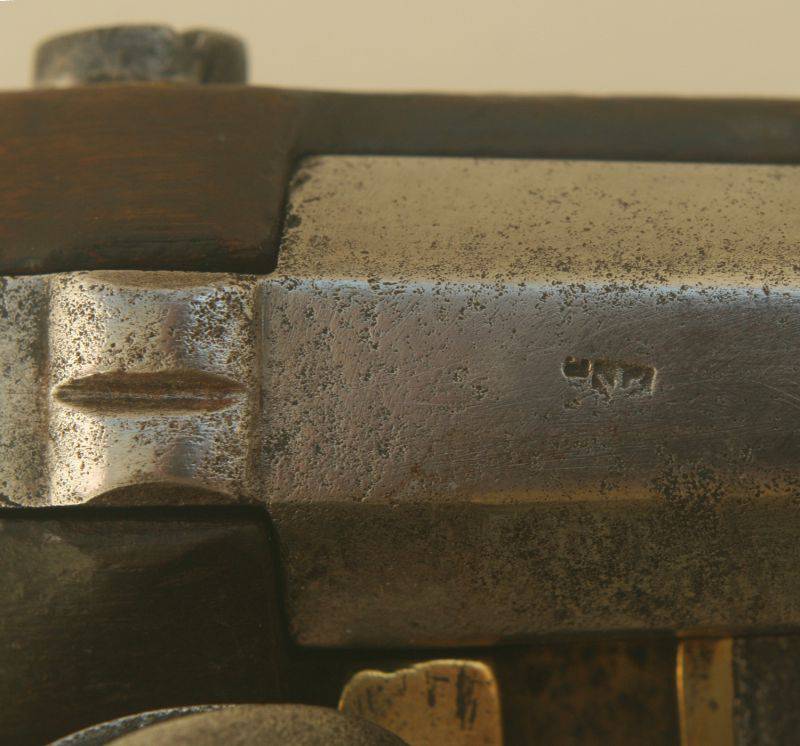 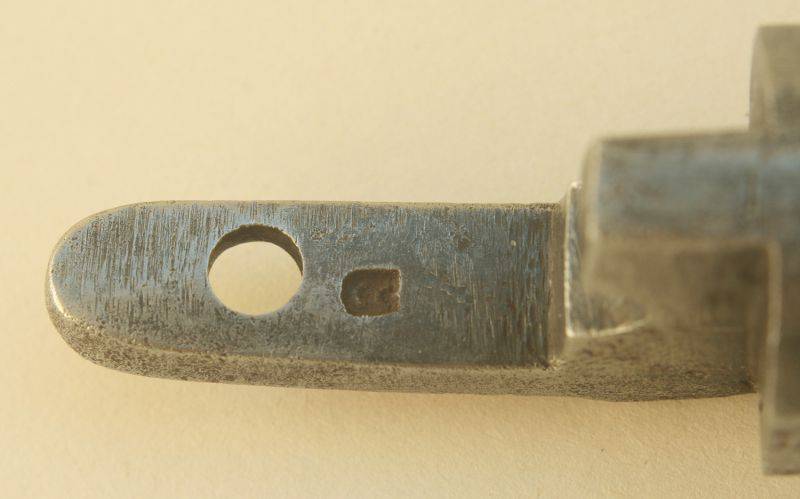 On the tail of the breech screw, a horseshoe-shaped stamp is applied from the inside. 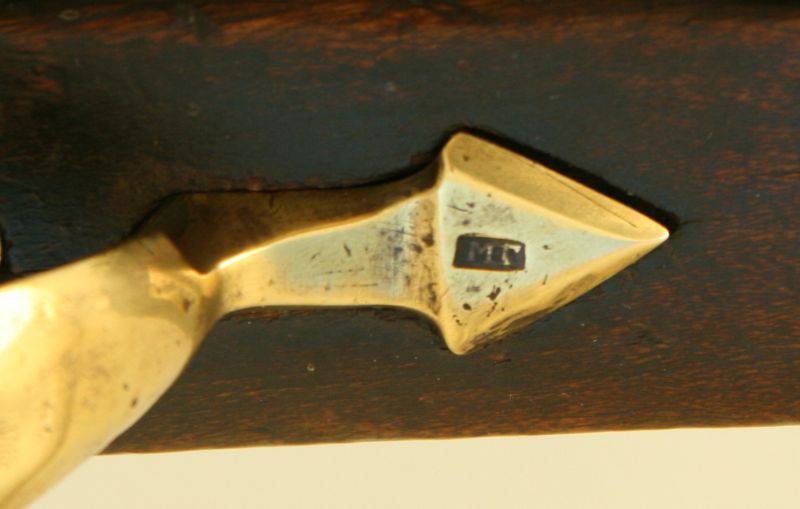 The front arrowed part of the trigger guard is stamped in the form of the letters "MG". 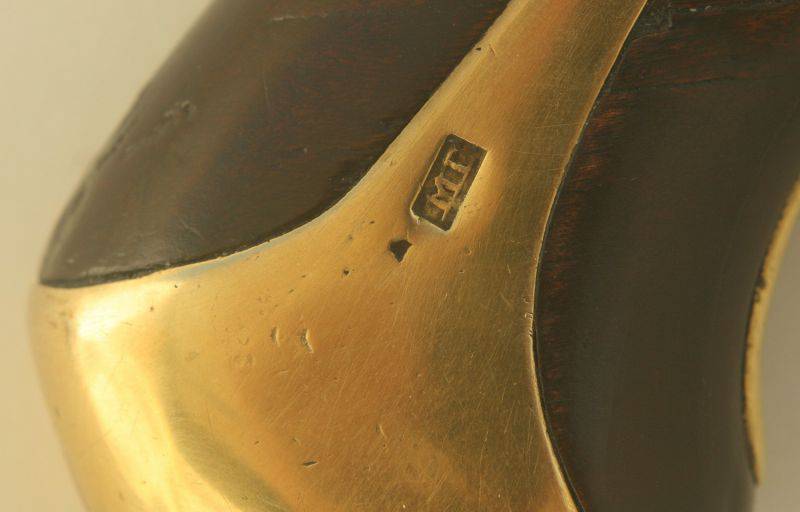 A similar stamp is applied on the right side of the shank of the pistol grip.

Photos of the Russian cavalry flintlock pistol of the lower ranks of the 1839 sample of the year were kindly provided by a private collector residing in one of the EU countries.