November 17 2015
16
In the 1930-ies in the USSR began quite a rapid development of reinforced concrete construction. At the same time from the monolithic reinforced concrete gradually began to move in the direction of prefabricated structures. The main advantage of prefabricated structures was the ability to manufacture standard parts on landfills or factories, of which on site could easily assemble a finished structure. The fact that for modern citizens, who are literally surrounded by precast concrete structures, is obvious, in the 1930s it still seemed unprofitable and not reliable enough.


It was only literally just before the war that the first precast concrete plants appeared in the country. At the same time, monolithic concrete reigned supreme in the fortification, which made it possible to provide the necessary level of protection for the casemate, but monolithic construction was possible only in ideal conditions, in the warm season. To build a monolithic reinforced concrete pillbox in tight deadlines and under enemy fire was simply unrealistic.

The very first fortifications, which were made of concrete blocks, appeared in the years of the First World War. The size of such blocks made it possible to assemble structures from them manually practically at the front edge of the defense. Similar developments also existed in the USSR. For example, a machine gun dot was made up of blocks of 40x20x15 cm sizes with holes that were used to hold the rows of blocks together dry. Through these holes, special brackets were inserted or pieces of reinforcement were passed. As a result of the assembly, a long-term reinforced type firing point was obtained, having a wall of 60 cm thickness and 140xNNXX casemate. Coverage of such a dota was made of logs or rails, a ground pad and the same blocks. 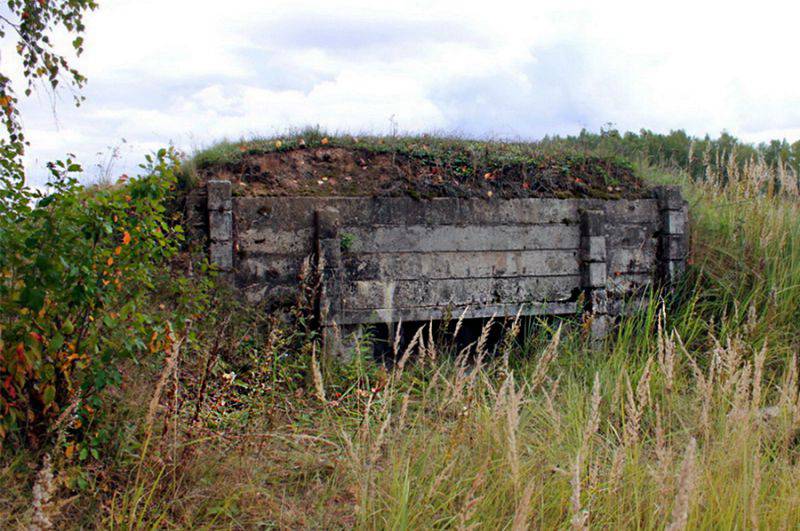 But this design had its obvious drawbacks: the assembly of such a structure from more than 2-x thousand blocks with a total weight of more than 50 tons required 300 hours of working time. Also from such blocks it was impossible to build a pillbox for an artillery gun. Initially, when creating defensive lines, they mainly focused on building monolithic structures and bunches, but for solid blocks, construction materials (crushed stone, sand, rebar) and concrete mixers were needed directly at the work site, as well as teams of skilled concrete workers. Production and pouring of the concrete mixture had to be carried out in compliance with all the technologies. And for the construction of bunkers, not only wood was needed, but also skilled carpenters, sometimes neither one nor the other was in place.

Therefore, after the start of the war in July 1941, the country decided to intensify the production of precast concrete pillboxes. Already 13 in July 1941 of the year of the T-bills obliged the people's commissariats of the building materials industry, the construction department, Glavvoenostroy at the SNK of the USSR, as well as the Moscow City Executive Committee to manufacture 1800 sets of precast concrete bunkers. In order to create fortification barriers, the plants and enterprises of the Moscow Region, Leningrad, and Ukraine were assigned the task of producing 50 thousand metal hedgehogs. By the middle of August, 1941 produced 400 sets of pillboxes and 18 thousands of metal hedgehogs in a centralized manner in the country.

However, the rapid development of the situation at the front posed serious problems for the Soviet industry. It was necessary as soon as possible to switch to the widespread use of prefab construction, to organize a preliminary centralized procurement of structures and parts for subsequent installation at the defense lines. As in other sectors of the national economy, it was necessary to seriously simplify construction, go to the search and use of local material and technical resources. At the same time, the situation prevailing on the front forced the leadership of the USSR to begin the construction of defensive lines on a wide front and to a great depth, which was very difficult in the emerging realities. 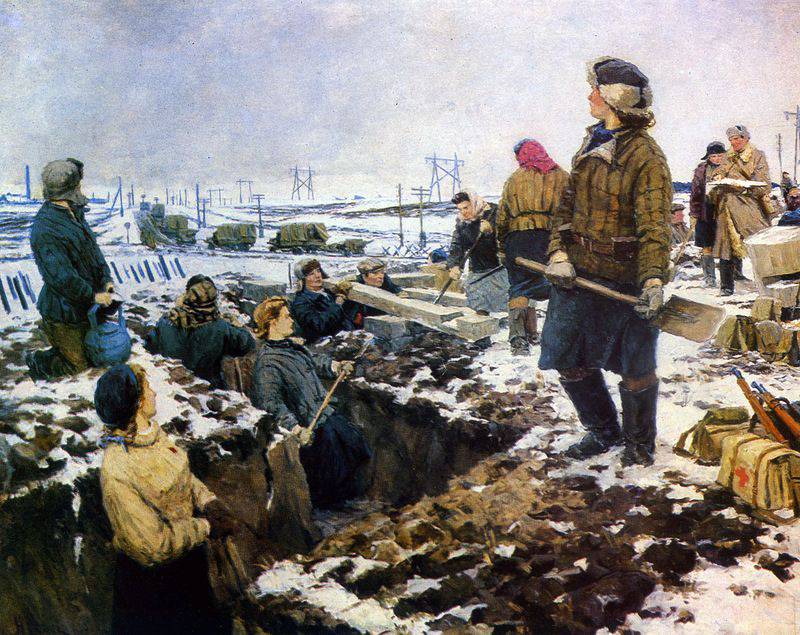 Construction of defensive lines near Moscow

On the whole, this July 13 and subsequent GKO decisions on the centralized production of reinforced concrete products intended for defense construction were not fulfilled due to the lack of cement. There is nothing surprising. From 36 Glavtsement’s factories, which were part of the construction materials industry Commissariat, fell into the combat zone and ceased production of the 22 plant. While in May 1941, cement production in the Soviet Union was 689 thousand tons, in August it was reduced to 433 thousand tons, in November - 106 thousand tons, and in January 1942 was only 98 thousand tons. Interruptions in the supply of fuel and materials, transportation difficulties have complicated the work of 14 located in the rear cement plants.

It can be assumed that in the year 1941, the national teams were launched into mass production, which were developed by the military engineer Gleb Aleksandrovich Bulakhov. These pillboxes were a set of various reinforced concrete beams, which docked with each other approximately like a wooden blockhouse, connecting “into a bowl”. At the same time, the blockhouse came out double - with external and external walls, between which concrete was poured or stone was packed. The construction of such prefabricated pillboxes was completed literally in one day, using the simplest crane or by hand. The weight of the heaviest element of this design did not exceed 350-400 kg. The pillboxes were also covered with concrete beams, with the result that a completely concrete casemate was formed inside. The thickness of the side and front walls of the bunker was 90 cm, the back side was 60 cm. Double walls did not require an anti-splinter arrangement - there was no cracking of concrete from the inside of the outer wall of the projectile.

There were two main types of precast pillboxes from beams - gun and machine gun. An 45-mm anti-tank cannon, the famous forty-five, was to be installed in the cannon. In the machine gun pillbox, the casemate was relatively small - the 1,5x1,5 meter, there was also a low door and an embrasure made of special concrete elements with special protivokoroshtennymi ledges. In the gun pillbox was a little more - 2,15x2,45 meters, and a set of elements easier. Inside, stops were installed for the bipod of the gun, which was actually located inside the embrasure, closing the entire garrison. But from the “cannon set” of beams in the Moscow defense zone, construction was carried out of machine gun dots equipped with OPS-3 installations. Surprisingly, the width of the amber box almost to the centimeter coincided with the thickness of the front wall - it only remained to strengthen it with concrete. In addition, with the help of concrete and formwork, the opening was reduced and an armored door was installed. 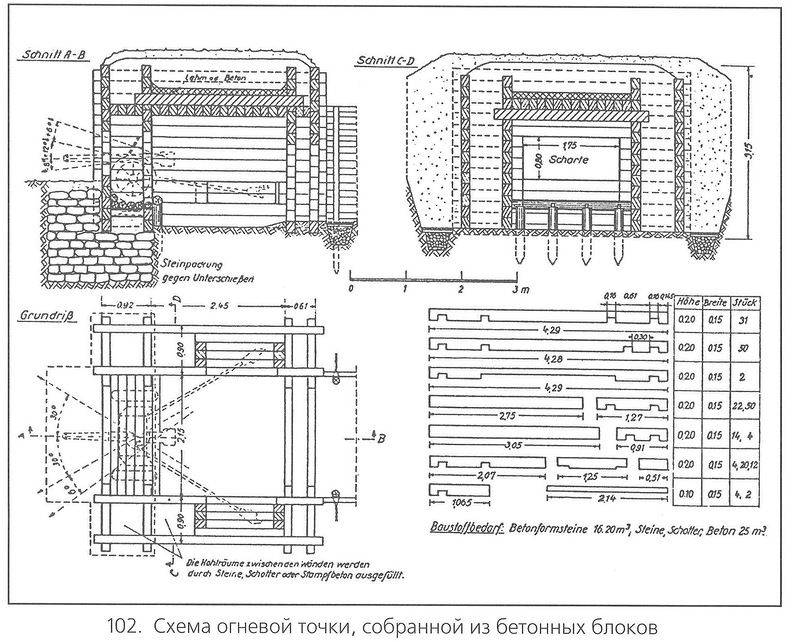 The scheme of precast concrete bunkers, compiled by German engineers

However, the century of such structures was not long, in the end they could only get into the album of the design and engineering bureau of the Main Military Engineering Directorate. At the same time, the drawings did not “live up” to the new edition of the “Manuals for field fortification”, which were released in our country in 1943 year. It can be noted that one of the reasons for this was the large-scale supply of prefabricated sets of wooden protective structures to the advanced, including bunkers, which were made in numerous industrial enterprises. Compared to concrete structures, they were lighter, cheaper, and did not require the use of concrete that was scarce at that time, as well as reinforcing iron.

Today, the only printed source where there is a reference to these precast concrete pillboxes is a German essay, which was compiled with reference to an album of drawings captured by the German army in the Crimea. It is worth noting that Soviet reinforced concrete pillboxes were erected around Sevastopol. In the defensive areas that were built around the city, machine-gun and artillery constructions were present. The authors of the German monograph rather highly appreciated the Soviet idea. It was noted in the paper that with the presence of a cargo crane with a load capacity of 500 kg, such a dot could be built in just 12 hours. Perhaps this figure was taken directly from the very album of drawings.

Soviet specialists also spoke highly of these fortifications. Brigadier engineer A.I. Pangksen wrote in his report that when building defensive lines near Moscow, builders preferred precast reinforced concrete casemates made of beam elements. Combat experience has shown that reinforced concrete construction is very profitable in field conditions. According to Pangksen, one reinforced concrete casemate was usually erected per day, and the payment for its construction to the builders was 500 rubles. In addition to the pillars of reinforced concrete beams, pillboxes built from large concrete blocks were also common. Such blocks were excellent in resisting the fragments of shells and mines, as well as bullets, but they could fly apart like a small house of cubes when heavy shells hit them. Another disadvantage was the obligatory presence of an automobile crane on the construction site. 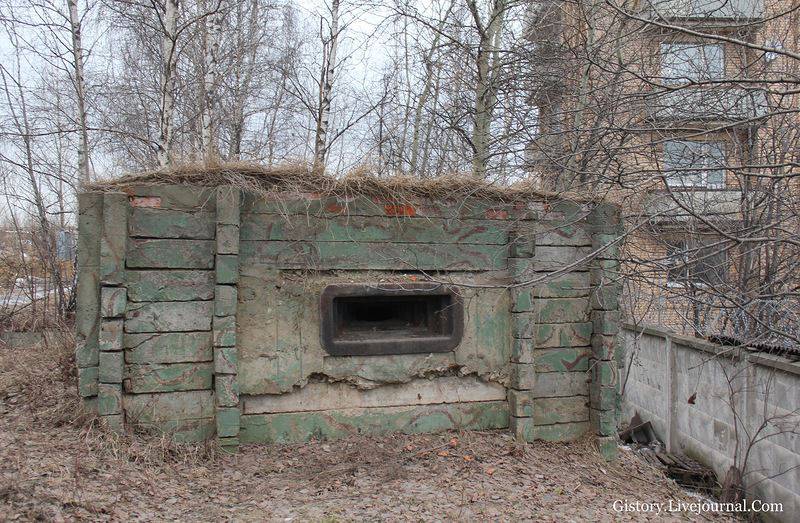 Unfortunately, very few precast reinforced concrete pillboxes have survived to this day. After the war, such defenses were as easy to understand as they were built. Often they were simply “taken away” for parts that they used in their personal and national economy. Many people used the reinforced concrete beams of such pillboxes as foundation blocks, and the dismantling of protective structures was carried out not only after the end of World War II, but also continued in the 1980-90 years. A significant number of such pillboxes survived around the Borodino field, where they are located interspersed with monolithic structures, as well as on the territory of Moscow, where there are 4 assorted machine-gun pillboxes and one gun.

The largest preserved section of the defense of Moscow is currently located in the Bitsevsky Forest Park, on the southern outskirts of the city between Balaklavsky Avenue and the Moscow Ring Road (MKAD). In fact, it can be said that the entire Bitsevsky Park is one huge monument to the fortifications of the autumn-winter city of 1941. The park still has an extensive system of trenches with dugouts, machine gun caps, ditches, bunkers and pillboxes. The uniqueness of this site is that even now you can see the whole sector of the defense of Moscow, having a depth of several kilometers. Some of the prefabricated pillboxes of this area became monuments, for example, a prefabricated machine-gun pillbox of reinforced concrete beams with embrasure NPS-3, located near the metro station Bittsevsky Park. However, not everybody was so lucky. Most of them are abandoned, covered with graffiti and littered with city garbage. 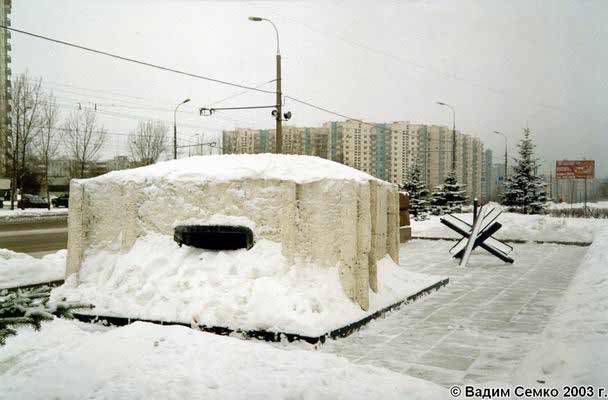