And joy, and fear, and awe 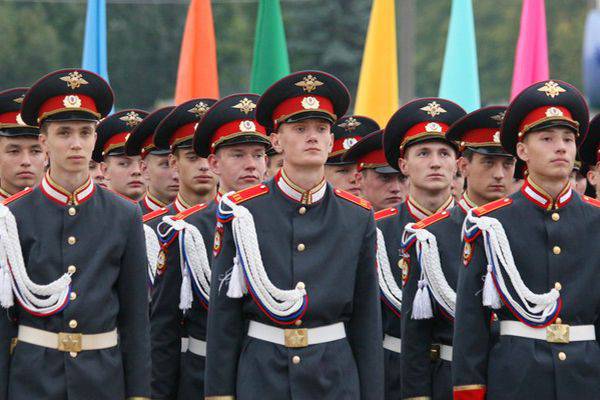 Remembering the parade of 9 May ... Among those who walked in the festive procession to the sounds of marches and military-patriotic songs, there were representatives of the Rostov region. They were the cadets of the Aksai Cossack cadet corps named after Danilo Efremov. It is gratifying that 14-year-old Artem Bludov from the village of Celina famously marched in their slender ranks.

The young cadet shared his impressions of the Victory parade.

Cadet Bludov does not hide pride, although he is a little embarrassed by the attention of journalists, because the right to participate in the grand parade not in Red Square is a great honor, a lot of the elect. Of the many Cossack cadet corps, the choice fell on their corps, because the Ministry of Defense highly appreciated the educational process of the Aksai educational institution and is now “taking” it under its wing, under the jurisdiction of the Ministry of Defense. Of course, each of the Danilo-Efremov cadets of the Cossack cadet corps wanted to march at the main parade of the country, but the selection was strict. For a trip to the capital, the Ministry of Defense commission selected 260 boys, the youngest of whom barely turned 120 years old, the oldest one 11.

“We started training in March at home, in the Rostov region,” says Artyom, “practiced a clear, synchronous turn of the head, learned to properly stretch one's leg during the march, and minted a step. It is not so easy as it seems from the outside. The company of the guard of honor of the Rostov region shared its skill and personal example with us. We worked for many hours under their guidance. ”

In April, the Aksai cadets flew to Moscow. One and a half hours on the plane - and now they are in a huge metropolis.

- Were you able to see the capital in the breaks between workouts? - I ask Artem.

- Yes, - the cadet admired admits, - we were in football, in theaters, in the Donskoy Monastery, and in the tank museum, and in the Cathedral of Christ the Savior ... In general, it is easier to say where we were not!

And this is despite the fact that the boys were engaged in preparing for the parade every day on 5-6 hours, a day later they went to the Alabino training ground. In this case, it was necessary to wake up at half past three in the morning, because to go far, but without this in any way - on the range were held joint training of all the parade participants. Only the dress rehearsal took place on Red Square.

The boys marched at any time of the day, in any weather. “Somehow it started to rain,” recalls Artyom, “our form was wet to the skin, water slipped in our shoes, but we walked, it was a shame to show that it was cold and wet, which was hard ... Russian Defense Minister Sergei Shoigu himself training, especially noted our cadet corps, said: "Marching best of all pre-university military institutions!" We were so happy when we heard such praise from the Minister of Defense himself! "

The guys for their work and diligence were awarded special commemorative medals of the Ministry.

But what about the textbooks? In order to keep up with the curriculum, our cadets were engaged in the Moscow Higher Military Command School. No absenteeism - everything is as it should be according to the rules! And on the day of May 9, Don guys took part in the main parade of the country. For the first time, students of Aksai Cossack Cadet Corps, along with their mentors, marched through Red Square paving, past the Kremlin, before the eyes of enthusiastic Muscovites and guests of the capital. Their ceremonial calculation ("box") was headed by the corps director, Colonel Vasily Alexandrovich Dontsov, previously commanding the 22 th special forces brigade.

The whole country watched the parade in the live broadcast - everyone who cares about the feat of Soviet soldiers who won the Great Victory over the Nazi invaders. Of course, those fighters who walked along this square with the victory flags in the distant 1945 year were not marched in the parade now: their health was not the same, but the power of the spirit remained the same! White-haired veterans are not just honorary, but the most important guests of the Victory Parade, a parade in their honor and glory!

“We walked along the same square where our soldiers went to the front in 1941, and in the 1945 year of May 9, the liberators, heroes of World War II, passed. I want to believe that we will be a worthy change for them, ”the cadet shares his impressions. - Both my great-grandfathers went through the war “from one to the other”: Mikhail Vasilyevich Bludov is an artilleryman, Ivan Aleksandrovich Valuysky is a tankman ... While marching, each of us experienced both joy and fear and trembling. Everyone tried to show their best. I wanted to be worthy of my great-grandfathers ... And also - to please my grandmother Valya and grandfather Tolya - they have done so much for me, I love them very much and are very grateful to them for everything ”.

At a military airfield in Rostov-on-Don, 10 in May of excellently trained pupils of the Aksai Cossack Cadet Corps named after General Danilo Efremov was met by an honorary delegation. The command of the Southern Military District arranged a grand reception for the children. And the case director, Colonel V.A. Dontsov thanked his cadets and promised a “three-story” cake for the whole “box”.

This, of course, great, but not in the cake happiness! And the fact that the guys had a unique chance to show their skills and combat bearing, to become the elite participants of the main Parade of Russia!