"An ordinary tank will penetrate such a boat through" 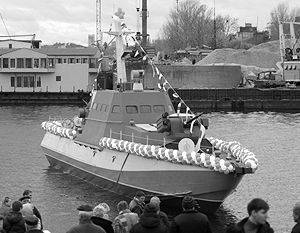 “I want to wish the crew of this boat to always defeat the enemy just as our army and our great people will always win,” Turchinov said. The ceremony of the descent took place at the factory "Leninskaya smithy", where the boat was built. The plant, by the way, belongs to the President of Ukraine Petro Poroshenko.


Probably, under the initiators of the “freeze” Turchinov had in mind the former President Viktor Yanukovych, during the reign of which - in October 2012 of the year - the first two boats were laid. Then the authorities said that boats would be needed to solve problems in the Danube basin and in the coastal zone of the Black and Azov seas. At that time, Ukraine was in active conflict with neighboring Romania because of the disputed areas of the Black Sea oil shelf. However, then their construction was frozen due to lack of funds. Work began again in the 2014 year, and now the boats are put into operation.

In 2013, the Ministry of Defense of Ukraine created in Odessa, the management of the division of river ships of the Navy. The location of the division was declared the Practical Harbor of the Western Naval Base of the Navy, and as its tasks - service on the border rivers, lakes, estuaries, as well as during external raids in coastal waters. Before 2017, it was planned to build nine boats of the Gyurza-M type for the Ukrainian Navy, Maxpark reported.

As Interfax-Ukraine reminds, the displacement of a small armored artillery boat (MBAK) Gyurza-M is 51,1 tons, cruising speed is 25 nodes, the crew is 5 people, autonomous navigation distance is 900 miles.

The first vice-president of the Russian Academy of Geopolitical Problems, Captain 1st Rank Konstantin Sivkov notes that the Ukrainian Navy in recent years has not received any new ships at all, and even such boats will be a “significant gain” for them. He recalled that the flagship of Ukrainian fleet - The frigate Getman Sagaidachny is just an analogue of the Russian guard, a ship of the second rank.

“The same can be said about the new boat. It has a displacement of only 51,1 tons. Of the weapons, at best, a 76 mm cannon from tank type PT-76, one large-caliber machine gun and installation for launching unguided rockets. All. These are the ultimate possibilities, ”Sivkov explained to VZGLYAD newspaper.

According to him, booking such a boat can not exceed 25 mm. “In reality, there are millimeters 15 – 16, based on armor belt, armored logging. At best, this armor will protect it from the bullets of heavy machine guns. And that is not all. So all this is a game. 51 ton is ridiculous, this is squalor. An ordinary tank will penetrate such a boat through. This boat is capable of making a short foray into the coastal part, disembarking a sabotage group, firing a target on the coast, and then have time to escape before they rolled, ”said Sivkov.

Ukrainian military expert, associate professor at the Karazin Kharkiv National University, Vyacheslav Tseluyko, recalled that building the boats of this project was conceived because of friction with Romania over the Danube Delta. "Now the relevance of these supplies has decreased," Tseluyko told the newspaper VIEW, assuming that after launching the boat, they would still serve on the Danube, that is, in the west of the republic, away from the ATO zone.

In the composition of the Ukrainian Navy replenishment - just two armored artillery boats. They are intended to serve mainly on rivers and estuaries, but can also be used as coastal sea boats.

He also agreed with Sivkov about the fact that these boats can not be considered a significant acquisition for the Ukrainian Navy and "repair of tanks and howitzers is much more important than one armored boat." “There was such a thing as the politics of gunboats, when ships armed to the teeth went to distant countries and represented the interests of great powers there. Their combat value was negligible, but they displayed a flag. So in this case, a pair of boats in the Danube Delta will be a demonstration of the flag, so to speak, in disputed territories, ”Tseluiko suggests.

As for Kiev’s hopes for the supply of American ships, the expert emphasizes that the relevance of this issue is low and the Ukrainian military “are waiting for more topical things - communications equipment, thermal imagers,“ Hummers ”and artillery radars - what was promised and incorporated into American expenses budget for next year. ”

Recall that in March, Kiev negotiated with the West about the supply of arms, in particular, about the free transfer of naval forces of American coast guard boats and the purchase of corvettes and minesweepers at the lowest possible price.

In June, RIA News-Ukraine reported that the United States actually transferred five high-speed boats to the Ukrainian Navy. The ships are equipped with Furuno navigation radars, machine guns for 7,62-mm machine guns, spare parts and tools. Four boats were intended for naval special forces, and the fifth - for the fleet search and rescue service. The boats promised to use special forces for “quiet and quick” delivery to the necessary areas, to patrol the area and fight against saboteurs. The cost of boats varies from 350 to 850 thousand dollars.

However, since then, new messages about exactly which waters of the boat have been sent have not appeared. Tseluyko said he did not know anything about the fate of the five.

As the newspaper VIEW wrote, in July, representatives of the NATO assessment and advisory group visited Nikolaev to inspect the material and technical base of the training center of the Naval Forces of Ukraine and the naval airbase and discuss the preparation of the aviation component of the naval forces. In Odessa, the delegation visited the flagship of the Ukrainian fleet - the frigate "Hetman Sagaidachny."

Since Kiev has no money for the fleet, the Ukrainian experts then counted on a gift. “Perhaps, it will be about transferring some funds to Ukraine, ships, aircraft from the United States,” Vyacheslav Tseyuiko did not rule out. - It can be one or two frigates, such as Oliver Perry. Perhaps anti-submarine defense helicopters. ”

As the newspaper VIEW noted at the beginning of October, Ukraine ranks ninth in the world in sales. weapons, is fighting and dramatically increases the military budget. In such conditions, the military-industrial complex of the country should flourish, but it is exactly the opposite - the industry declines and produces “illiquid”. The reasons are in extremely inefficient managers who are perfectly able to “rub glasses” on the country's leadership.

It remains to add that during Soviet times on the territory of modern Ukraine, in Nikolaev, the largest ship of the Russian Navy was built, the aircraft carrying cruiser Admiral of the Fleet of the Soviet Union Kuznetsov, whose displacement is 65 thousand tons. Today’s Ukraine can only dream of building such warships.