Winchester, which did not become "Kalashnikov" (part of 3)

November 12 2015
26
As a result, all these developments resulted in the American patent No. 681,481, issued by 27 on August 1901 to Mr. Thomas Johnson on a very unusual carbine, which then appeared in the metal in 1905 - 1906. and dubbed "Model 1907 of the Year." The primary sample, judging by the schemes from the patent documentation, was still quite archaic. The store was located in the butt, like the Spencer carbine, although there were already two important new parts: a free bolt and a bolt pusher protruding from the forearm under the barrel.

On the 1907 model of the year, the free gate has been preserved, the “pusher” has been preserved, but the store has received the Lee system. And that's it - this is how a very interesting one was born. weaponwhich the company has produced for half a century, from 1906 of the year to 1958 of the year. Shop on 5 or 10 cartridges, located directly in front of the trigger guard. The only cartridge proposed by the “Winchester” for the 1907 model of the year was the .351SL centerfire (i.e., central combat) with a bullet weighing 12,96 g. (Caliber 8,9-mm). 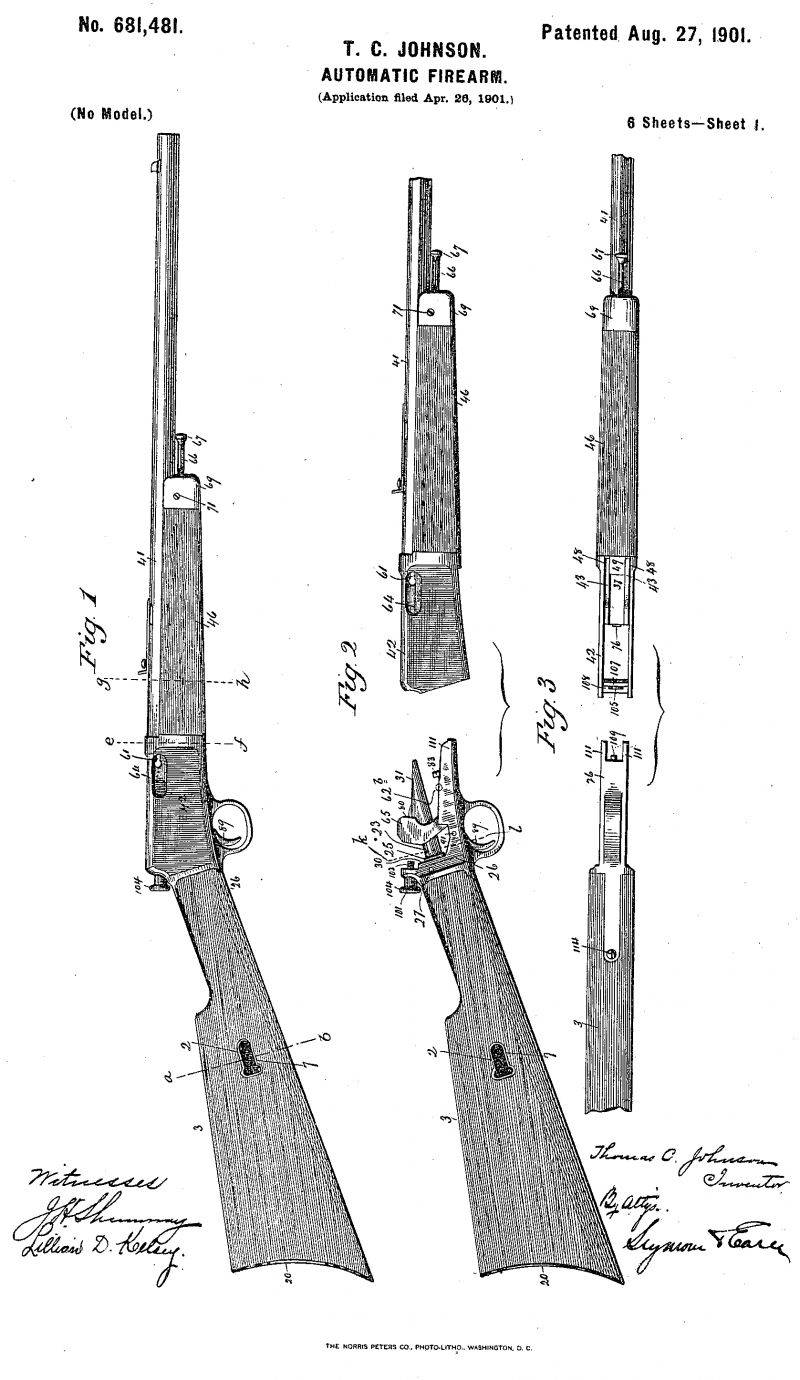 The carabiner was produced in standard finish, and a deluxe with a pistol grip. In 1907, its price was $ 28. In 1935, Winchester offered a special “police rifle” - an option that was distinguished by a number of small improvements and a bayonet. 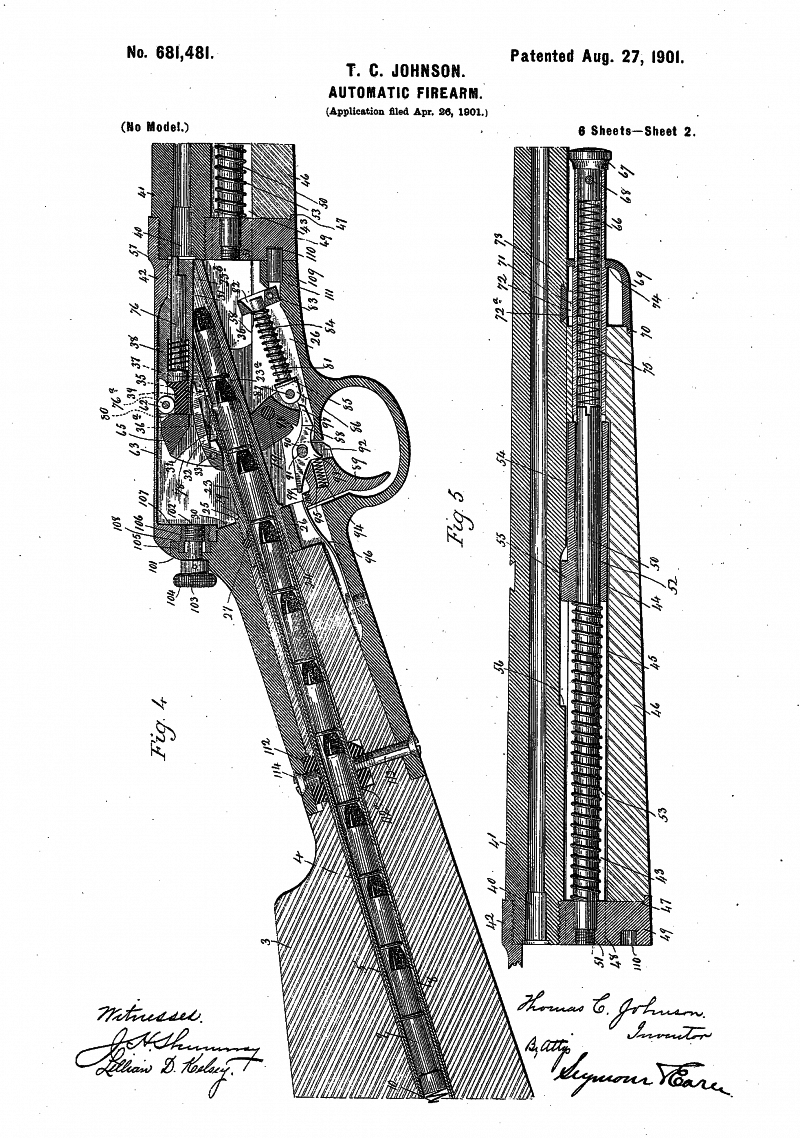 The “Winchester Model 1910 of the Year” (also known as the “10 Model”) was produced before the 1936 year. This rifle had a magazine for four rounds of .401 caliber self-loading hard drives or .401 WSL (10,3-mm caliber) with a bullet weighing 16,2 g. The price of this model was $ 30. Weight of models of different editions ranged from 3,6 kg to 4,1 kg, length - 970 mm, barrel length 510 mm. The truth and the weight of the free gate, and the springs connected with it, turned out to be not too small either - 1,2 kg. The speed of the bullet was 653 m / s (.351SL) - a very good indicator. The advantages of weapons include the fact that the bolt was covered in the receiver so that the dirt inside almost did not get, and it was very convenient. In this case, the sighting range of shooting was equal to the 400 steps, that the military, who believed that the 1200 steps are not enough, seemed to be small. 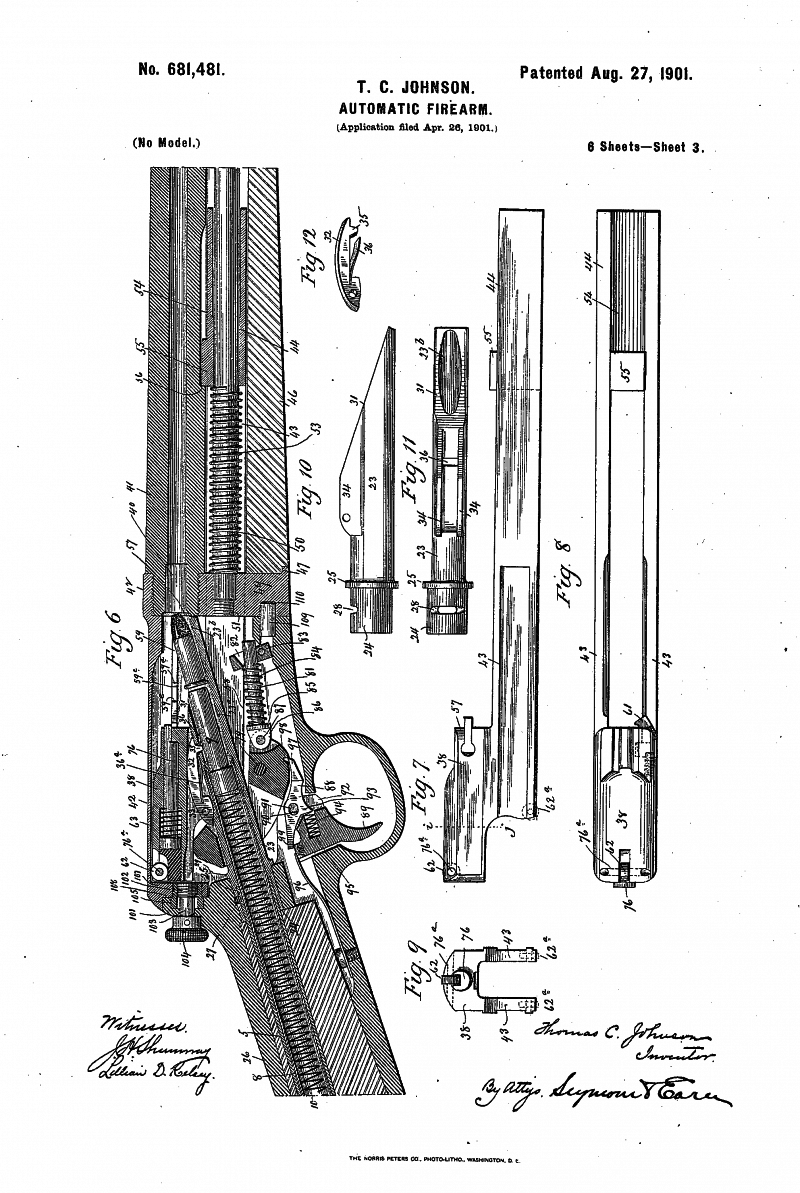 Incidentally, there was also a sample of 1903 of the year, but with the .22 ammunition of “side-fire” caliber, and with a magazine in the butt of the 1901 patent of the year, but it was not as popular as the subsequent samples.

Winchester model 1903 of the year. You can clearly see the "socket" for charging the application store.

Reloading the carbine was unusual, but convenient. He put his fingers on the cap of the rod under the barrel (or put it in something hard), pressed, pulled back all the way and released. And that's it! Carabiner reloaded! There was practically nothing to break in the carbine itself, so its design was simple and, therefore, reliable. 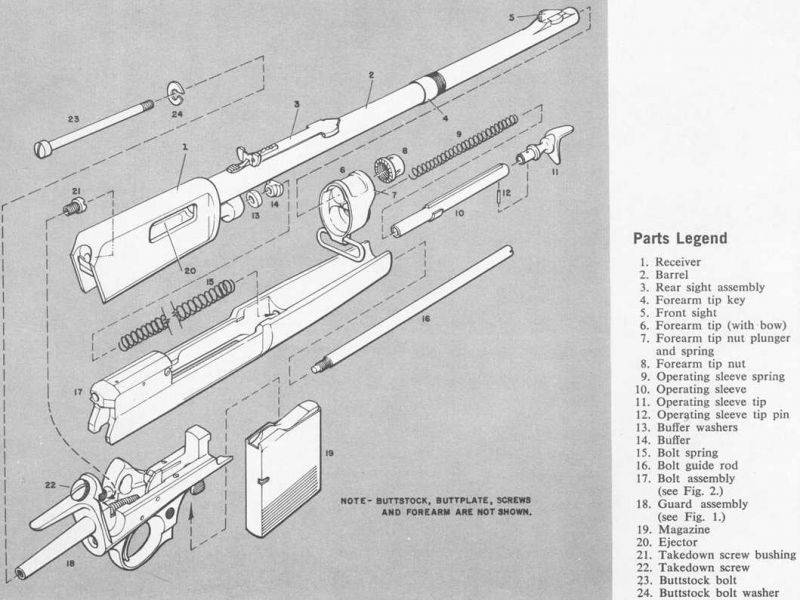 For a long time carbines were sold as hunting weapons, including here in Russia. But then the First World War began and the attitude towards them immediately changed. The Winchester factory reports that in the 1915 year, the 150 carbines of the “1910 model” and 25000 .401SL cartridges were ordered by the French government. 7 December 1917 of the year was ordered about 400 000 .401SL cartridges for the "model 1910", that is, they, apparently, quite actively used. There are data on the 500 order for carbines of the “1910 model” Russia, dating back to 1915 and 1916. 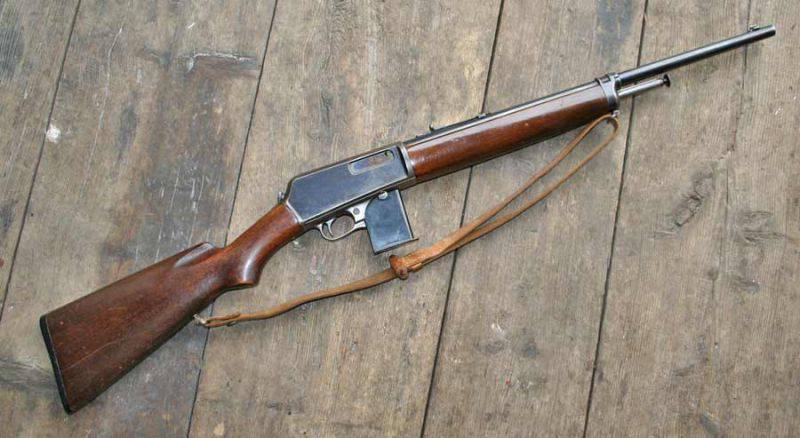 Model 1907 with a larger magazine.

The French government first ordered 300 1907 rifles in October 1915, and soon followed an order for 2500 rifles. The order of ammunition for these rifles exceeded 1,5 million .351SL cartridges to 1917 year. Subsequent orders in the 1917 and 1918 years also amounted to 2200 1907 carbines of the year. In accordance with the factory records, these rifles were modified to conduct fully automatic fire and were equipped with Lee “Navy” rifle bayonets. These rifles were designated the "1907 / 17 model", and used magazines on either 15 cartridges or 20, with a rate of fire from 600 to 700 rounds per minute.

Model 1907 with a magazine for 20 cartridges and a bayonet from Lee "Navy."

Where was this weapon used? And here's where: with the beginning aviation combat semi-automatic hunting carbine Winchester model 1907 caliber .351 and Winchester 1910 caliber .401 began to be used ... observers on two-seater airplanes.

Then they began to apply already in land battles. In particular, they armed the assault units during the Brusilov Breakthrough in June 1916 of the year, and also used them in France. And if we assume that they fired not with pistol but “intermediate” cartridges and, in addition, with automatic fire, under which they were reworked, what does this work? "Typical trench broom", and with good slaughter. And this was the first machine gun, in any case applied at the front before our machine gun VG Fedorov! After all, in the summer of 1916, at the Officers' School of Oranienbaum, Fedorov’s automatic rifles only armed a company of the 189 Infantry Regiment of Izmail, and sent it to the Romanian front as part of the 158 soldiers and 4 officers only in December 1 of the same year. But this, so to speak, is an inference based on dates and logic. The most interesting thing begins when studying books by Soviet authors on stories small arms, that is, when referring to sources of information.

So, in the well-known book of A. B. The “Handbook ...” beetle (edition of 1993 of the year) of the hard drive is, one way or another, mentioned on the 483,498,526,608,669,678, 684 pages, but about 1907 / 10 samples. Not a word was said, as if they simply did not exist! What did the Beetle not know about? Did he look at all the catalogs on weapons that were sold in Russia? Yes, I knew, of course, I mentioned, even on p. 535, that there were, say, samples of automatic weapons, including the hard drive, and then again I went about Russia's priority with regard to Fedorov's machine gun. And that she was the first Russian automatic rifle in 1916 to receive baptism of fire. And that's right! What's wrong? And not so - a trifle: “automata” in the course of the “Brusilovsky breakthrough” were already used, therefore, his work was supported, and even earlier the same Winchester machine guns were purchased by the Russian government on advice (and how would our military otherwise know about it?) military attaché in France. Moreover, if someone is going to think that there is at least some derogation from the creative genius of our compatriot, then this person is clearly mistaken. Look at the dates.

Both Fedorov and Thompson began working at the same time almost at the same time, working in parallel (in the history of technology, this happened very often!), And at the same time they prepared their samples. And it’s not our designer’s fault that our military preferred to buy American carbines instead of stepping up work on their own development. Although ... not so much bought. We looked - “how does it work ?!” And only after that Fedorov was given the “green light”. It is logical, by the way! But from the point of view of ideology, then yes - we had such a fad: to push out all our own and diligently conceal someone else's. Well, what did such distortions in informing the society lead to? We even know very well!

Advertising carbine M1910 in Russia, and even with a silencer!

As for the Thompson carbines, it turned out that their fire on the aircraft was very effective, and the bullet pierced even the 6 mm steel sheet, although the distance is unknown. But it is known that, along with the 1907 model's hard drive of the year, a small amount (about 600) of the semi-automatic 1903 model's hard drives of the year was delivered to France for training shooting of observers at fast-moving targets. They were used as pigeons, which at that time were destroyed as far as possible in the rear simply because they could carry enemy reports. 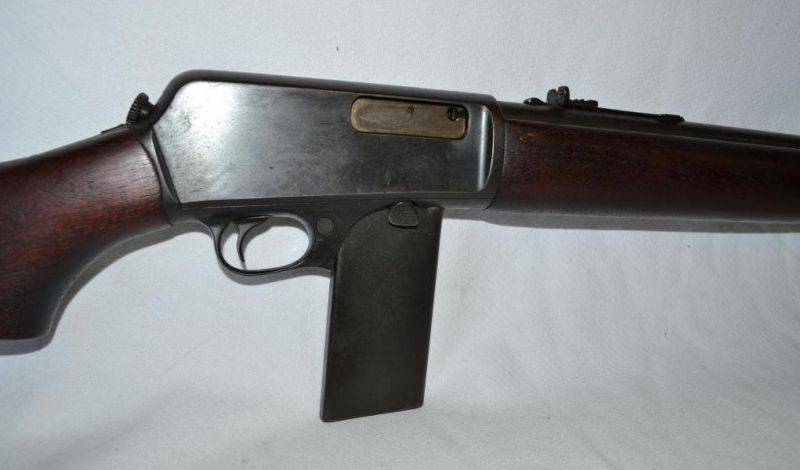 Not less than 600000 of the original .22 side-fire cartridges were spent on pigeon shooting. These small-caliber hard drives could only conduct semi-automatic fire, but they had a very high rate of fire in the presence of stores ready for firing.

Marking caliber on the store.

Interestingly, in Cuba, a real submachine gun, the “Cuban Winchester,” has already been made from this Winchester. It was made of parts from different types of weapons and could shoot with decent accuracy at a distance of 25 yards with 9x19 mm cartridges, which were fed from ... luger snail stores. 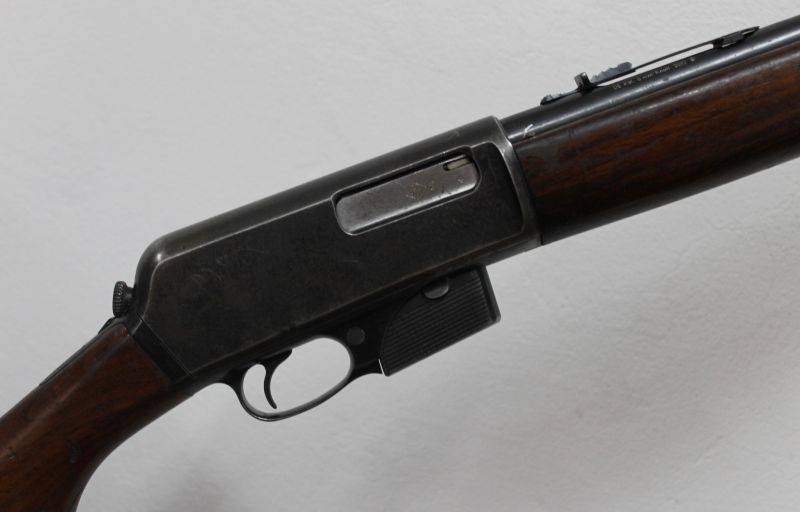 Shutter frame with shutter and magazine. Behind the mounting screw, unscrewing which, you can disassemble the carabiner into two parts. 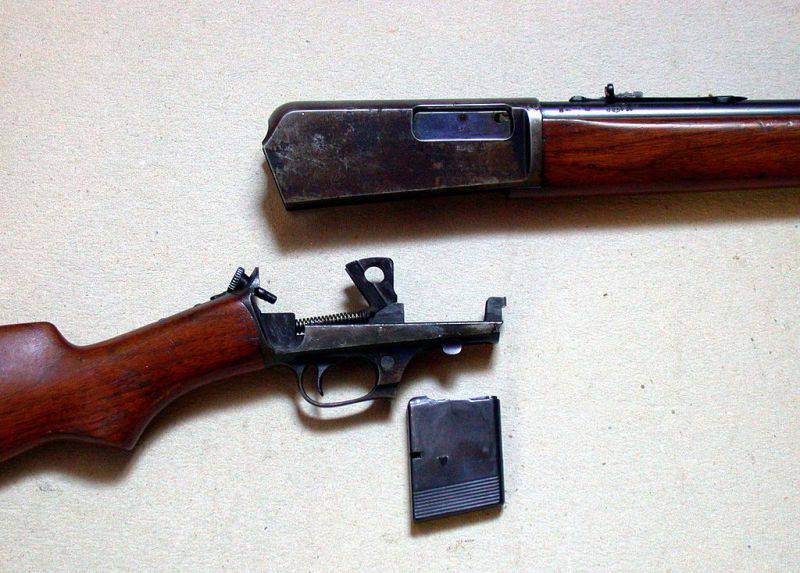 And so he understands!

Well, now a little fantasy, because without it, well, nothing can be! Watch carefully. At the end of the piston-pusher we put the cup in the shape of a hemisphere and the L-shaped lever on the left side with corrugation for the fingers. We connect this piston with the gate and install the simplest locking mechanism - the wedge. Under the barrel we make a hole for the exit of gases, again with the L-shaped tube at the end, the hole of which must be directed into the pusher cup. And what did we get in the end? In fact: the prototype of the Kalashnikov assault rifle! 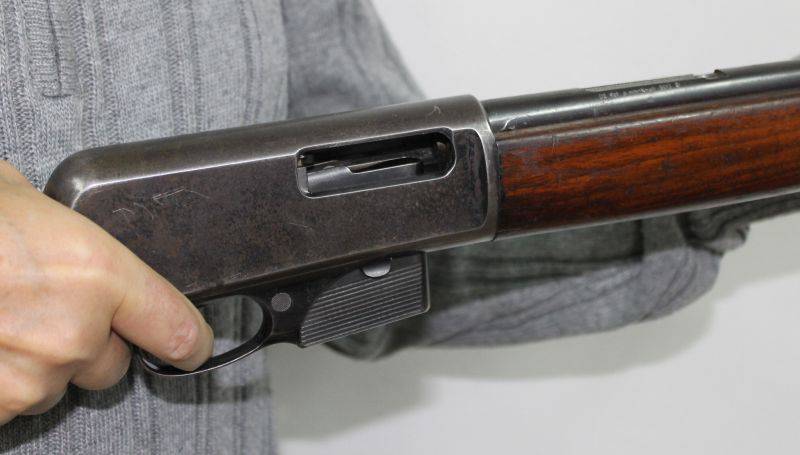 The shutter is open. In the window you can see the neck of the store.

What would make such an alteration? While maintaining the caliber, but increasing the power of the cartridge (so that it becomes even more “intermediate” or less, someone likes it) - a greater range of fire, bullet speed and a greater striking effect. It would have been impossible to shoot such cartridges from a free-bolt weapon, but with a “piston-drive” bolt — as many as you like! True, the store would have to lengthen, but that's all! All other alterations are small and, as they say, within the limits of reasonable and the then technologies, at the level of the same DM rifle. Browning BAR, which appeared later, but much more severe. 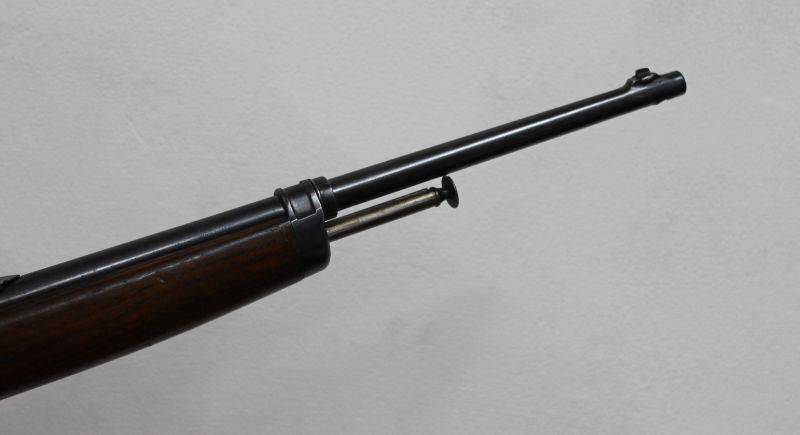 Piston pusher model M1910. It is necessary to answer that the head of the piston is small, to press on it is hard work. And, okay for me, a man without practice. But the American police also decided! Well, and the soldiers pushed the piston on the wooden lining of the trenches and generally on any solid object! 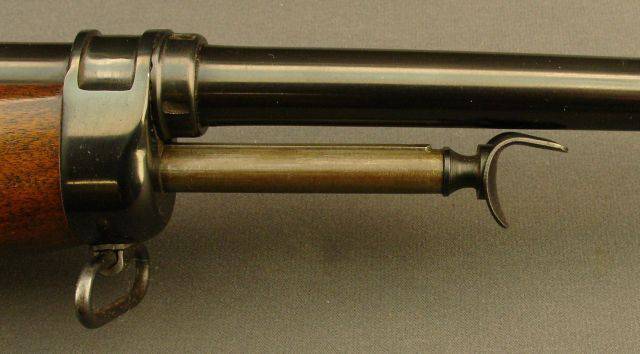 Piston pusher "police model". As you can see, the piston has acquired a more convenient form!

That is, the Americans overlooked, missed such a modification of the 1910 mod carbine that it could well go down in history at the same level as our famous Kalash. But our gunsmiths, who held him in their hands, didn’t see anything “like that” in him either, because the main thing - the “social order” was absent at that time, and the inertia of thinking continued to remain just as monstrously huge! 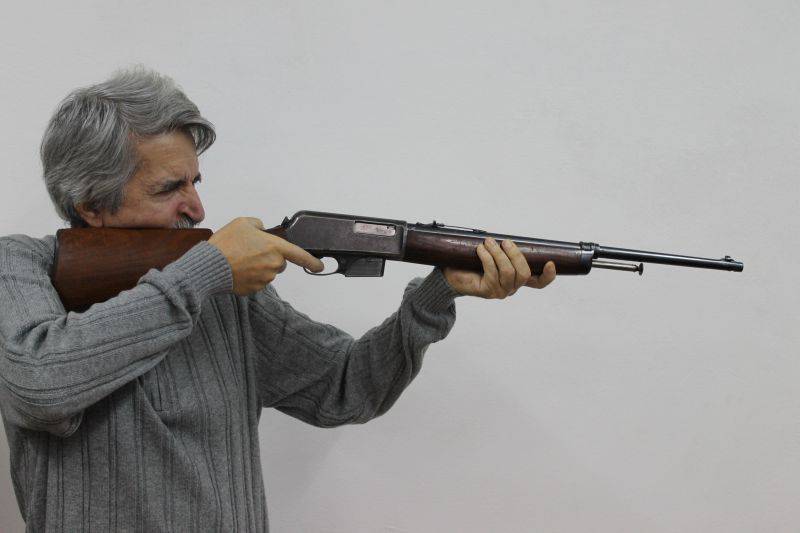 Holding in the hands of the M1910, I was convinced that it was a very applied and convenient thing with the 20 magazine of ammunition, and with a shooting interpreter it was a very good weapon, convenient in all respects.

Ctrl Enter
Noticed oshЫbku Highlight text and press. Ctrl + Enter
We are
Winchester, which did not become "Kalashnikov" (part of 2)
Military Reviewin Yandex News
Military Reviewin Google News
26 comments
Information
Dear reader, to leave comments on the publication, you must to register.