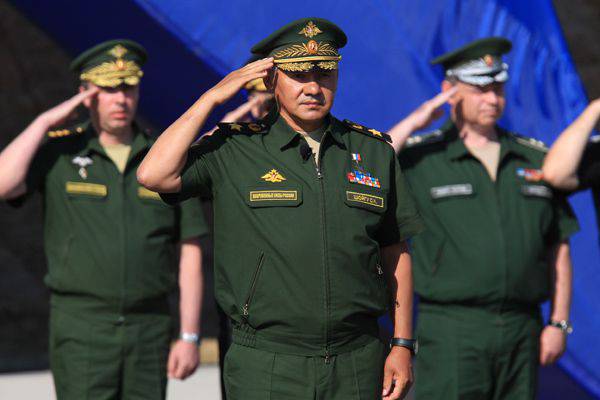 Three years old, as the Defense Ministry was headed by Sergei Shoigu.

For this relatively short period of time, the Armed Forces of the Russian Federation have become a streamlined combat mechanism that guarantees reliable security of the country. Changes affected virtually all aspects of army life, from command and control to everyday life in a soldier’s barracks. Major decisions on the reorganization of the Armed Forces were made by Supreme Commander Vladimir Putin. But their implementation fell entirely on the Minister of Defense and his team. We counted 10 critical steps along the way.

1. Army structure and fleet began to correspond to their modern tasks and external threats to Russia. For this, in particular, the Aerospace Forces and a new strategic command in the Arctic zone of the Russian Federation were created. In addition, eight new operational formations, more than 25 divisions (combined-arms, aviation, Air defense, surface ships) and 15 new brigades.

For the preparation of military decisions of the country's leadership, effective management of the army and coordination of the work of ministries and departments in the field of security of Russia by the decision of the President of the Russian Federation Vladimir Putin created the National Center for Defense Management of the Russian Federation. And in the military districts - regional and territorial centers.

2. Over the last three years, the number of trainings, exercises and maneuvers in the Armed Forces has doubled. The pilots began to fly twice as much, sailors - to swim, paratroopers - more often to jump with a parachute. In addition, federal, regional and local authorities are now actively involved in the exercises, which are learning to work in martial law and conduct territorial defense.

3. The monetary allowance in the army was significantly increased even before Sergei Shoigu. His merit is that in the Ministry of Defense, due to the new payments and allowances, it was possible to maintain a sufficiently high financial position of the military personnel. If in 2012, they received an average of 57,8 thousand rubles per month, a year later, 59,9 thousand, then in 2014, their allowance rose to 62,1 thousand rubles.

The ministry told the "RG" correspondent that even in a crisis, it was not planned to cancel payments that could reduce the income of officers and soldiers.

4. Preserving the mixed principle of recruitment, the generals were concerned about the recruitment and training of professional soldiers and sergeants. Every year, at least 50 thousand people receive contract service in the army and navy. In the next couple of months, the number of such servicemen in the Armed Forces will reach 352 thousands. First of all, contract servicemen are appointed to positions related to maintaining the combat capability of military units, and they are also determined by specialists in the maintenance and operation of sophisticated weapons and equipment.

5. For the better, funding and departmental control over the development, production and supply of new and modernized equipment and weapons to the army has changed. Since 2012, military arsenals have been replenished with more than 17 with thousands of armored vehicles, airplanes, ships and submarines, rocket complexes and other weapon-technical innovations. To control their rhythmic entry into the troops, the Day of Military Acceptance is being held on a quarterly basis, which will only allow this year to retool 207 formations and units.

6. Young athletes and graduates of civilian universities received the opportunity to voluntarily go for a year to sports and scientific companies. Now there is a set of recruits, techies in the production company. These units, as a rule, are formed at military high schools, army sport clubs and defense enterprises.

Only this year, new and modernized equipment and weapons will equip 207 military units
Now in the Armed Forces 12 scientific and 4 sports companies.

7. All 26 universities of the Ministry of Defense were transferred to educational standards in common with civilian educational institutions. The recruitment of cadets by personnel order of the types and types of troops has been restored - more than 11 thousand people per year. The demand for military education is constantly growing. This summer, the competition in some universities of the Ministry of Defense topped 20 people into place.

In addition, the departmental system of pre-university youth training has grown stronger. It was replenished with three presidential cadet schools, two IEDs and the same number of Cossack cadet corps.

8. The Ministry of Defense engaged in the arrangement of military camps. Before 2020, such works will be carried out in 519 garrisons. They are almost complete in 104. In the remote garrisons, cultural and leisure centers are being built with cinemas, libraries and shops.

Under the reception of new weapons and technology are preparing new park areas. As a rule, they use heated pre-fabricated tento-mobile shelters.

9. The troops now spend a lot of time on the landfills, and the deployment of personnel there pay increased attention. Relatively comfortable living conditions are created in the field camps of the full life cycle of a nuclear submarine-500. This year, ten more were added to the 15 active camps - by the 5 th. Military. What allowed to transfer educational objects to a year-round working cycle.

10. The army "played" an element of competitiveness. The brainchild of Shoigu - tank biathlon, air darts, other types of competitions entered the world stage. In August, the first Army International Games took place with the participation of 43 teams from Europe, Asia, Africa and Latin America. The Ministry of Defense emphasizes that such competitions increased the individual training of soldiers and officers, as well as the general level of professional training of crews and crews.

Ctrl Enter
Noticed oshЫbku Highlight text and press. Ctrl + Enter
We are
Early to write off the division in stock2010 Results of the Year (Part I)
Military Reviewin Yandex News
Military Reviewin Google News
89 comments
Information
Dear reader, to leave comments on the publication, you must to register.