November 5 2015
11
Heavy military transport aircraft Boeing C-97 Stratofreighter became an example of successful transformation of a combat aircraft. When it was created, Boeing used a wealth of experience gained during the development and production of long-range bombers. The aircraft became the development of the famous B-29 bomber in the transport direction. In addition to the transport option, there was a much more massive tanker aircraft KS-97, which for many years became the main aircraft of its class as part of the US Air Force.


The C-97 Stretofreighter military transport aircraft was built on the basis of the well-known B-29 bomber, but it was larger than the Super Strength. This was achieved by expanding the fuselage, mounted on top of the existing structure and having a larger diameter. This scheme has received the nickname “double bubble” from American pilots. In total, over the years of production, 77 aircraft were produced in a transport version. At the same time, the KS-97 refueling aircraft were built many times more - 811. It is curious that both modifications of the aircraft could be easily converted from tankers to transport and back - on the aircraft tankers, the equipment designed to refuel the aircraft in the air was completely dismantled. But the KC-97G (the 592 aircraft was built in all) became the most mass model, the planes of this model could be easily transformed into transport ones, even without dismantling the refueling systems. 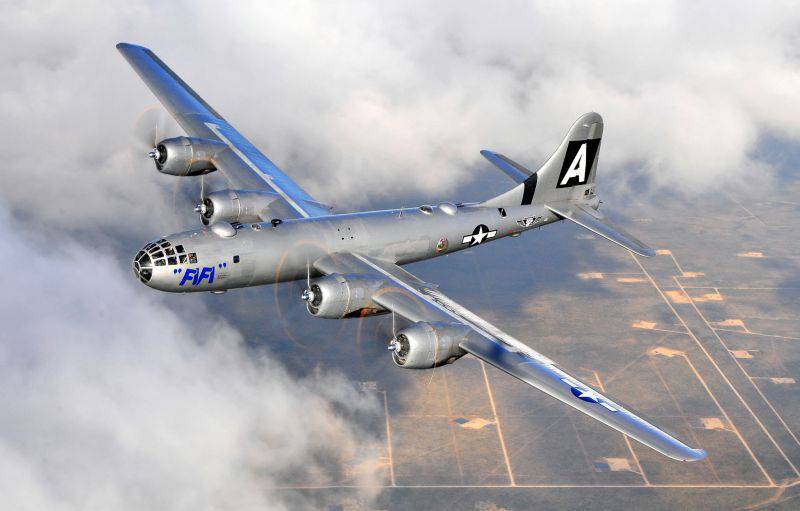 During the Second World War, the priority, of course, was given to the creation of military aircraft, for a long time transport aviation funded on a residual basis. At the same time, in 1942, the first transport version of the Lancaster bomber called Avro York took off for the first time, but this aircraft was not launched until 1945. In the US, Boeing was able to create a transport version of the B-29 Superfortress also in 1942, and in January 1943 the company received a contract from the US Air Force, which provided for the construction of three prototypes of the new aircraft under the designation XC-97.

The development of a transport aircraft created on the basis of the B-29 bomber, which was then "famous" for the Hiroshima and Nagasaki bombings, was supported by the US military. They needed a transport plane with a long range. The aircraft received the corporate designation of the Boeing Model 367 company, the military used another designation - XC-97 (X denotes the experimental model). The first of the three military-ordered prototypes for the first time rose in the sky 9 November 1944 of the year.

It is worth noting that the XC-97 had a lot in common with the B-29 bomber, including the wing and powerplant. At first glance, the fuselage of the transport aircraft, which represented the figure eight in cross section, was completely new, but in fact its lower part differed little from the B-29 fuselage. The same is true for the tail of the aircraft, which was attached to the upper part of the G8, which had a larger radius in cross section than the lower part of the fuselage. After completing a long series of prototype tests in July 1945, the first order to manufacture 10 pre-production aircraft was received, six of them had to be completed in the YC-97 cargo version, three in the personnel transport version - YC-97A and one YC- 97B with 80 seats for transporting passengers in the main cabin, as in civilian passenger aircraft. 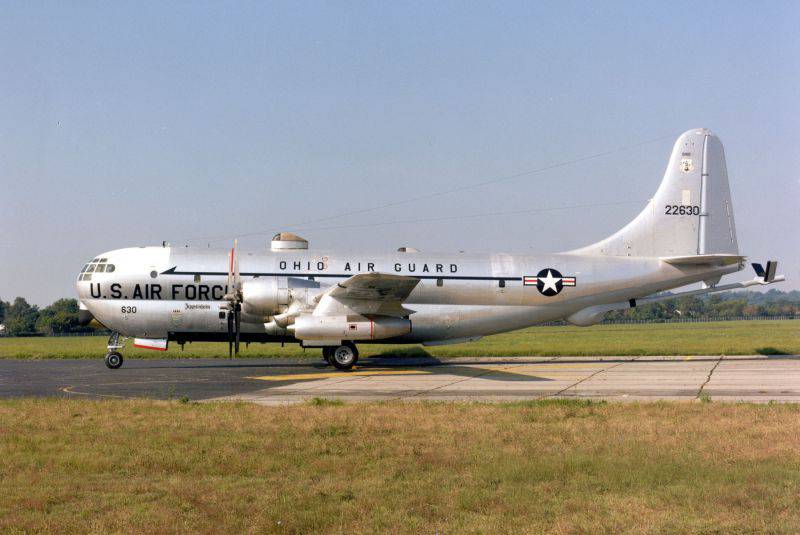 Initially, the transport aircraft was created double-decked: the lower part of the original B-29 fuselage was retained, but instead of the bomb compartments, special cargo compartments appeared in the upper part, and another fuselage, the diameter of which was 3,35 meters, was “added” to the fuselage section. Due to this, the aircraft fuselage acquired its original section in the form of a figure eight, and deep characteristic folds appeared along the sides. This form of the fuselage has been preserved on some modern Boeing airliners, but the external contours have become much more streamlined.

The first prototype of the aircraft, which took off in the sky in November 1944, was controllable at the level of the B-29 bomber. The aircraft demonstrated 9 January 1945 of the year for its speed characteristics and capabilities for solving the tasks assigned to it. Then the plane made a flight on the route Seattle - Washington with a cargo of 9072 kg on board, the plane overcame this distance in 6 hours 4 minutes with an average speed of 616 km / h. At this point, the original Wright R-3350-23 hp 2200 HP engines that were put on the plane. were replaced by more powerful R-3350-57A (2325 hp). At the same time, Boeing company experts planned to put even more powerful power units on the plane.

The YC-97A aircraft already had 28-cylinder Pratt & Whitney R-4360 Wasp Major engines, developing a power of 3000 hp, while the engine nacelles were redesigned, and new four-blade propellers were also used. In order to keep the transport aircraft on course when the external engine was inactive, the vertical tail was made higher, and the possibility of its folding was also provided. An anti-icing system also appeared on board the aircraft, and a new 75ST alloy was used in the production of the wing and some other elements. The capacity of the aircraft's fuel system was increased to 26 liters. The fuel system included 670 soft fuel tanks located in the center section, as well as 3 tanks in each of the wing consoles. The aircraft could take on board up to 16 kg of cargo, loading was carried out through the cargo hatch located at the rear of the fuselage. With the help of an electric winch, loads could be easily moved around the entire 18-meter cargo compartment along special guides. Light armored vehicles and motor vehicles entered the cargo deck of the aircraft independently. The transporter could take on board at least 598 servicemen and 23,8 wounded on stretchers with accompanying doctors. 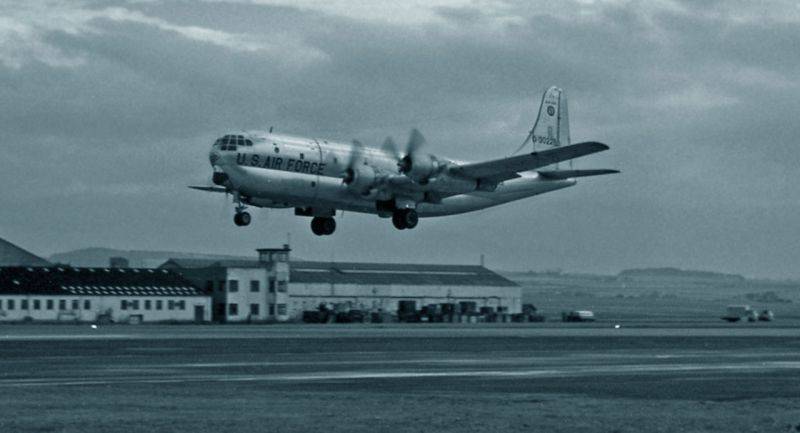 The version of the aircraft YC-97B was considered by Boeing as a prototype of a future civilian airliner and was used to transport VIP-class passengers. In the cabin of this aircraft, round-shaped portholes were made, and on the upper deck, rows of seats were installed (3 + 2 layout, 80 seats in all), there was also a kitchen. To go down to the lower deck, it was necessary to use a spiral-shaped ladder. The rear cargo hatch was dismantled, but in addition to passengers, the plane could carry up to 7711 kg of various cargoes.

The first of the six ordered YC-97, which was the last Boeing aircraft with Wright engines, flew into the sky 11 March 1947 of the year. These aircraft made a real revolution in the US trucking. On the instructions of the Aviation Transport Command, they flew to Hawaii. Later, the command was renamed the Military Air Transport Service (MATS). In 1948, these aircraft took part in the work of the Berlin Air Bridge, at this time the machines were in the sky 9-12 hours a day. In 1948, the military ordered the 27 C-97 transport aircraft, and then brought the order to 50 units. The first serials of the Stratofreighte had a slight visual difference in the form of a small in shape “growth” located in the forward fuselage. It was the radome of the APS-42 weather radar antenna.

After the Korean War broke out in 1950, orders for C-97 aircraft increased significantly, and Boeing, given the existing contracts for building B-47 and B-52, barely managed to cope with them. As a result, the production of C-97 Stratofreighter aircraft was transferred to the plant in Renton. In those years, the Strategic Air Command of the US Air Force was especially in dire need of a large number of tanker aircraft. They were needed to refuel strategic bombers in flight. For this reason, Boeing carried out a test cycle by installing the Flying Boom in-flight refueling system on three aircraft, designated KS-97A. It was a proprietary system that was recognized as successful and the aircraft went into production. The number of KS-97E, KC-97F and KG-97G tankers released was 592 units (and the military received 18 C-1956 aircraft of various modifications until July 888 in July 97). The first refueling aircraft could take on board up to 26 498 liters of fuel, but already on the KS-97E aircraft additional fuel tanks appeared, which made it possible to bring this figure to 56 750 liters. Most of the fuel could be transferred to refueling aircraft. The operator controlled the injection process, which was located in the rear part of the aircraft fuselage in the supine position. 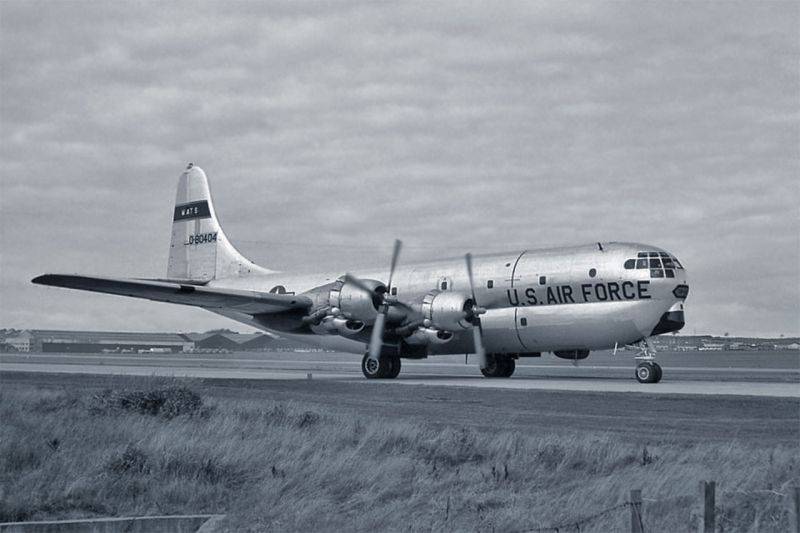 By the end of serial production in the 1956 year, the X-NUMX of the C-888 aircraft of all possible modifications was produced in the USA. Already in the course of the flight operation of the machine were refined in a variety of options. For example, on a KC-97L aircraft, two General Electric J97-GE-47 TRDs were mounted, which had a 23 kN thrust. This was done in order to make the tanker compatible with a Boeing B-23,13 jet bomber. At the same time, the KC-47G aircraft, converted into an exclusively transport version, were designated as C-97G, and the full-fledged passenger version of the aircraft was designated as C-97K. Special search and rescue modifications of the machine were designated as HC-97G. In addition to the US Air Force, the aircraft in small quantities were used for various tasks in the Air Force of Israel and Spain (three KC-97L aircraft). In Spain, they received a new designation - TK.97. 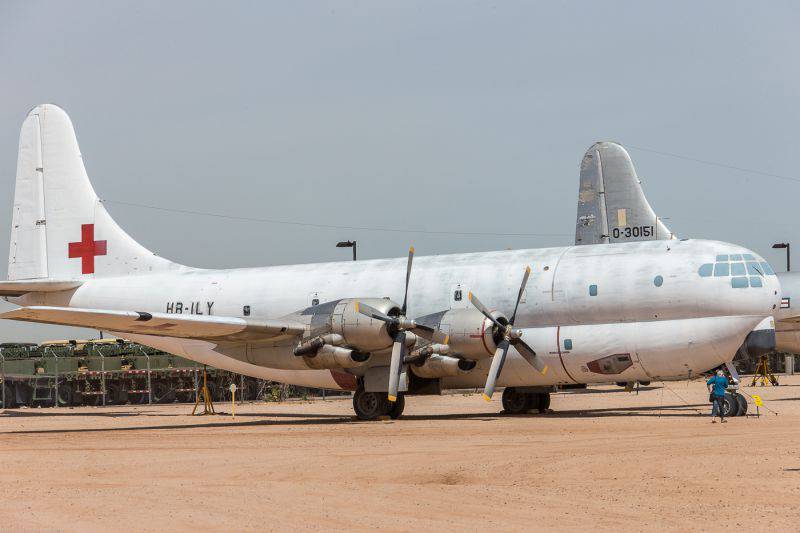 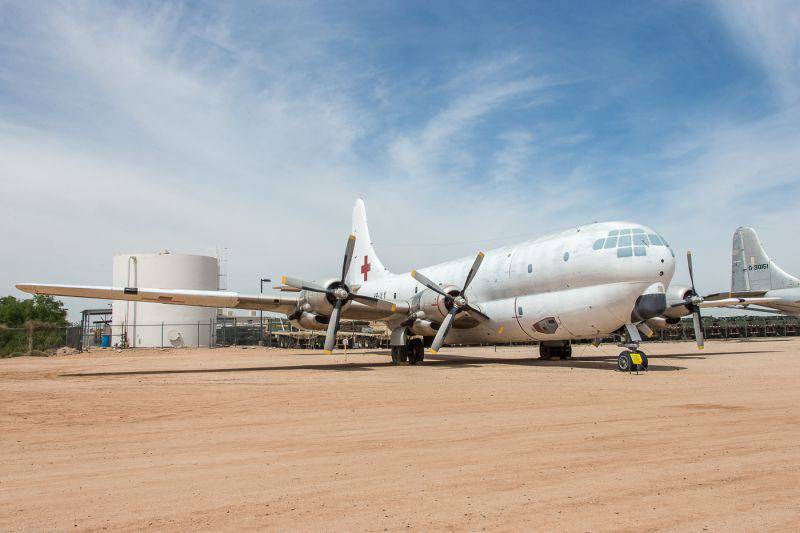 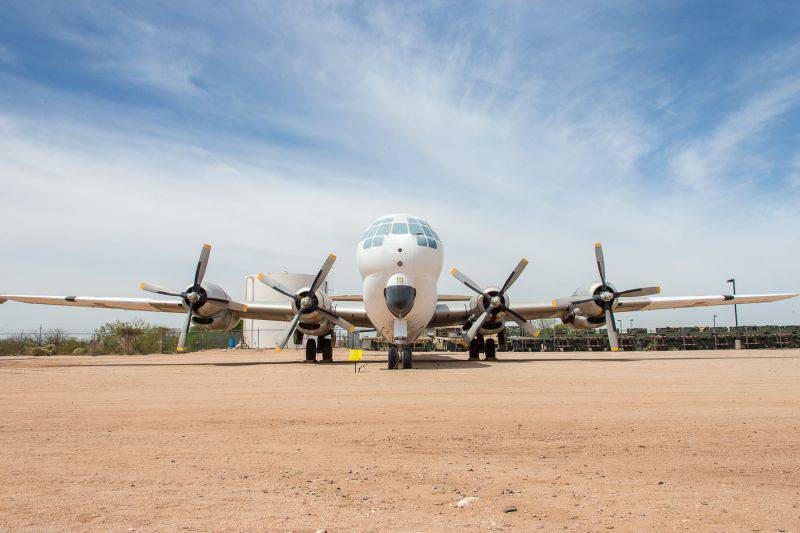 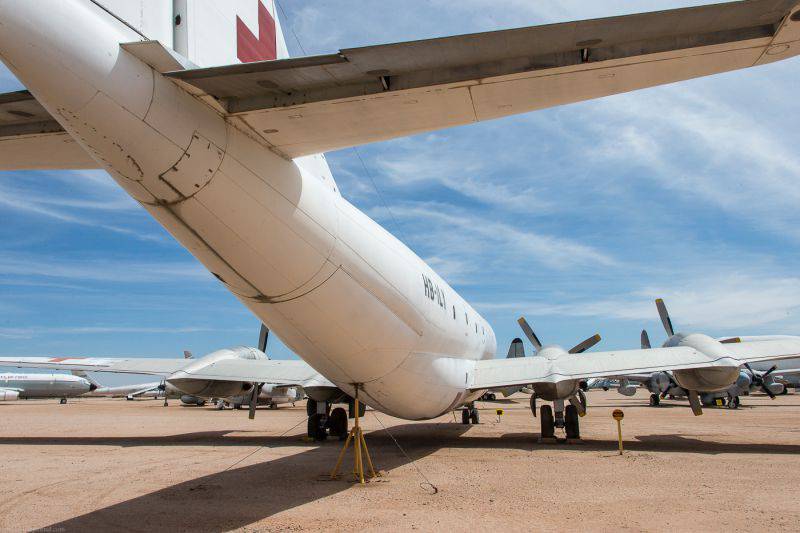 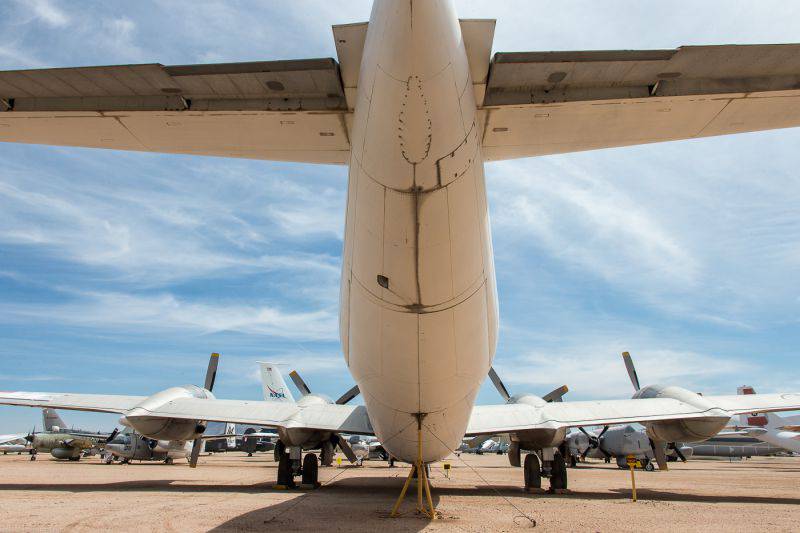 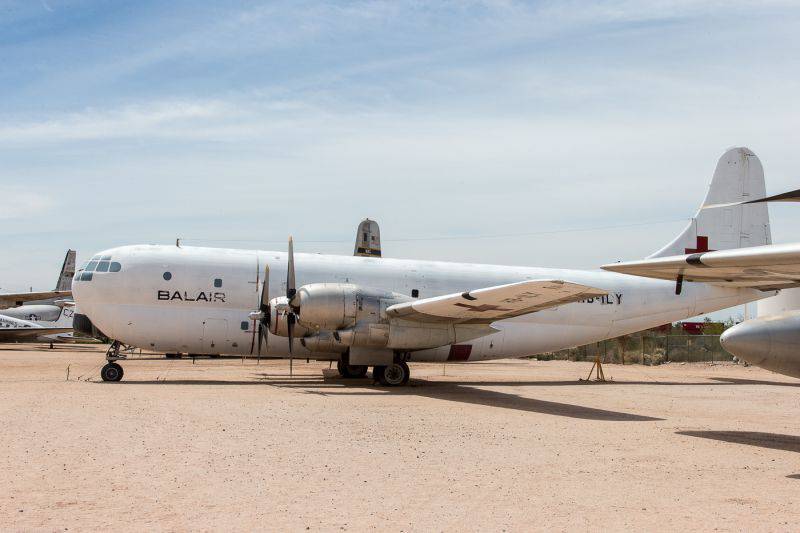