Winchester: shutter and magazine (part of 1)

November 9 2015
35
Winchester - referring to the famous gun, "conquered the Wild West" - a thing too famous and popular not to write much and in detail. Including on the pages of VO, where, in particular, at one time my materials were published about the battles of Americans with the Indians at Rosebad and Little Big Horne. It told not only about these battles themselves, but also about weapons. However, the design of the hard drive and the circumstances surrounding it are so interesting that ... inevitably have to return to them. Moreover, the author had the time not only to “hold on” to the 1895 hard drive, but also to shoot from it, and subsequently to hold in his hands a completely unique specimen of the hard drive.

And it was so that as a boy I saw a “gun” in my grandfather’s room on the wall. The family chronicle told me that it was from this gun that my uncle, who later died in the war, almost shot my future mother, blurting out her grandfather wolf's canister almost at close range. One kartechina remained in her hand for the rest of her life! Well, and then I myself saw how my grandfather chopped lead pieces of square section into pieces and stuffed the resulting “cubes” with cartridges with which ... a raven shot in the garden!

Bang! And from the flying crow only feathers flew! Then he began to teach me to shoot, and the complexity of the gun seemed amazing to me: first, squeeze the trigger, then fold the lower arm, so much so that even the trigger fell out of the gun, then put the cartridge in, lift the lever upwards and only then shoot! The guns of the fathers of the neighbors' boys with overlapping trunks seemed somehow unreal to me. Moreover, studying in a special school with English from the second grade, I very quickly read the stigma on it: "Winchester 1895, the American Army."

Well, and only then I learned that his grandfather had been given in 1918, when he was in charge of grain procurements, was in command of food detachments and ... he was shot, and he himself shot. But after the civil war, the military winchester was offered to surrender to him, and he gave it to the mess. In the armory, he was replaced with a rifled barrel for a smooth larger caliber, removed the clip for the holder, which was on the receiver, pulled the spring and the feeder out of the store, and at the same time changed the forearm. At that time in Soviet Russia there were a lot of such converted guns, because the winchesters too were supplied to us a lot and many of them for some reason turned out to be in the rear, and not at the front. Often they made fences for themselves (“cuts”), fists, and we have one such in the Penza Museum of Local Lore. Well, in 1965, the GED film “Sons of the Great Bear”, shot based on the novel of Liselotta Welskopf Heinrich, came to our screens, and I also became ill with the hard drive for life, although then I had to part with my grandfather's gun. 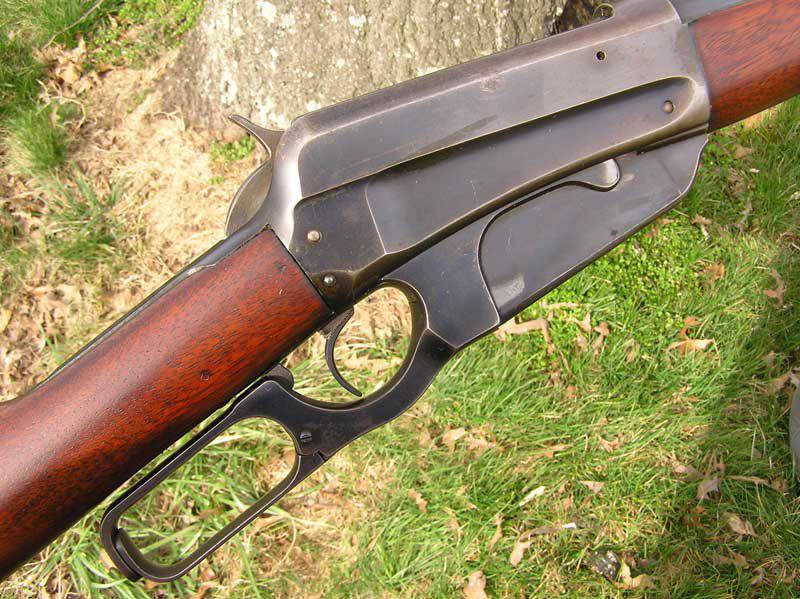 Well, it is, so to speak, the “personal impressions of the author,” and this is what tells us about where “it all began” “dry science история". And it was that 14 February 1854, an American named Benjamin Henry received a patent for ... a pistol, which had bullets (and they are gunshots, that is, bezelzovye ammunition!) Were in a tubular store under the barrel, and fed into the barrel with special lever, structurally combined with the trigger guard. 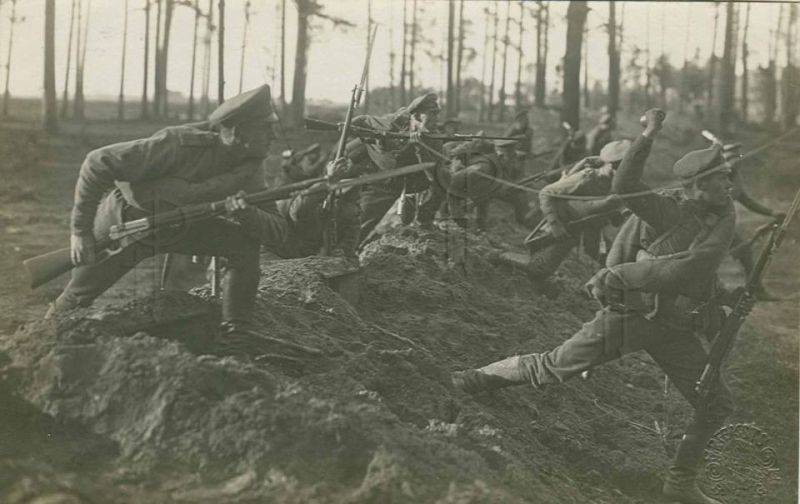 Russian soldiers with winchesters in their hands ...

It should be noted that the "first highlight" of the design - lead bullets of caliber 10-mm filled with a charge ... mercury fulminate was more original than this lever. True, there was nothing more than explosive mercury inside the bullet! When the trigger hit the striker, it pierced the explosive inside the bullet through an opening in the bolt, it flashed, and this, in general, was enough to throw it out of the barrel. This design simplified the design of the gun (no need for an ejector!), But it is known that the simpler the weapon, the better. The gun was called Volcanic. 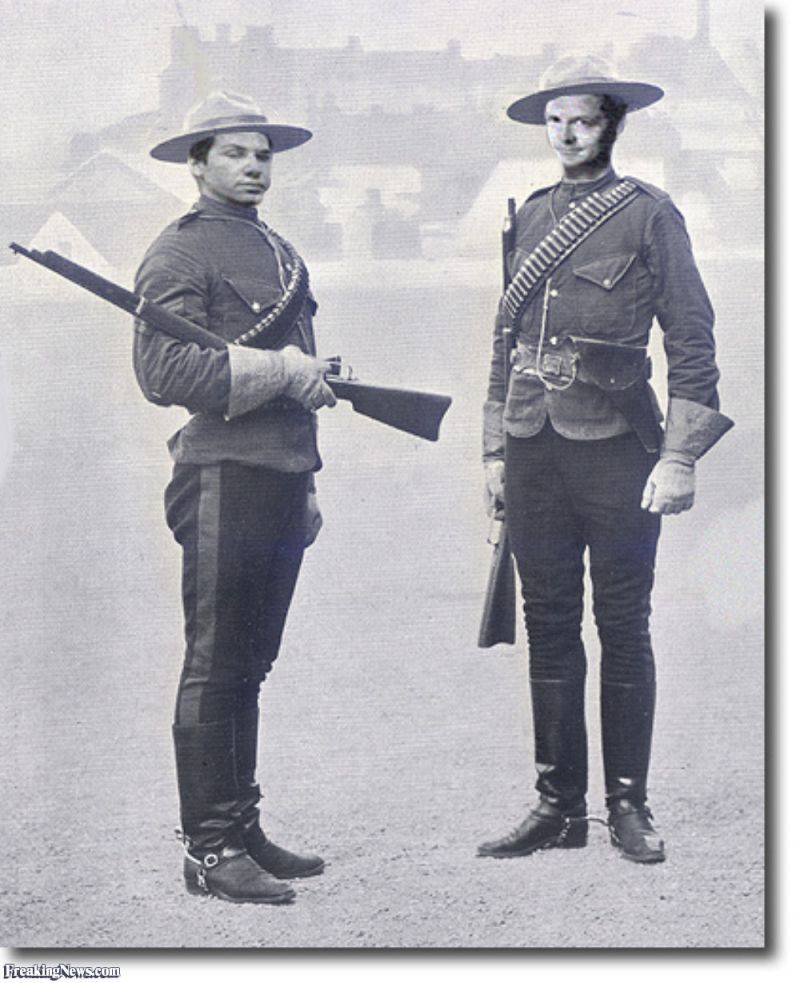 But ... despite all these advantages, the new weapon did not enjoy success on the market. The fact is that the speed of the bullet was small and, accordingly, the destructive power was also small. And it also turned out that holding the gun in my right hand and working with the left lever was uncomfortable. One could, of course, hold the pistol by the barrel and reload it with the right one. The company tried to bet on the Volcanic multiply-charged rifle, with a store of unbelievable length, but she did not have commercial success. As a result, the manufacturer, by the way, also called Volcanic, went bankrupt! 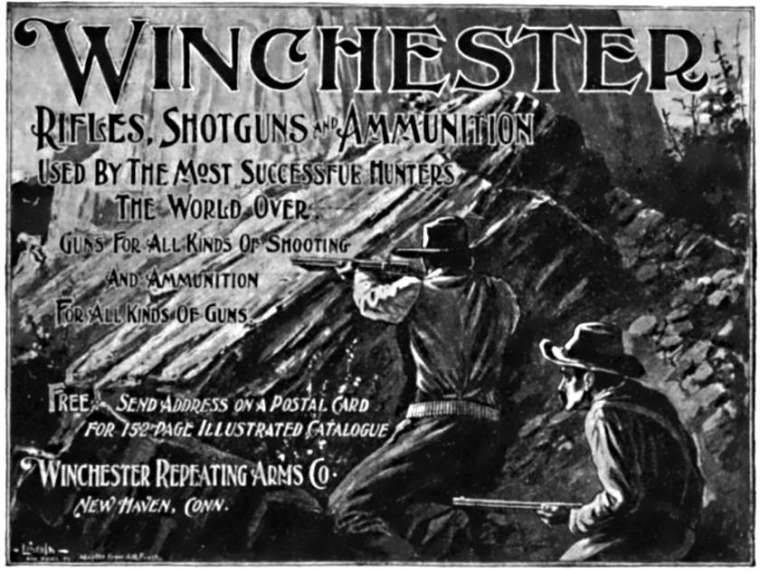 Here we will go back a little and remember how the weapons were loaded at all at that time. However, A.A. is shorter and better. You can hardly tell Pushkin about this, and he described this process in his novel “Eugene Onegin” as follows:
That guns really flashed,
Rattles a ramrod hammer.
In the faceted trunk bullets leave,
And clicked the trigger for the first time.
Here is a powder streak greyish
On the shelves pouring. Notched
Securely screwed flint
Cocked ...

To solve the problem of accelerated loading helped the invention of cartridges, in which together there was a bullet, and gunpowder, and primer. However, even earlier, the inventive human thought created a bezgilzov shot - that is, a bullet without a sleeve, in which the projectile charge was inside! I must say that many attempts were made at the time to create rapid-firing multiply-charged weapons. But scrolling revolvers, as well as multiply-charged pistols, as a rule, all had several barrels firing alternately! 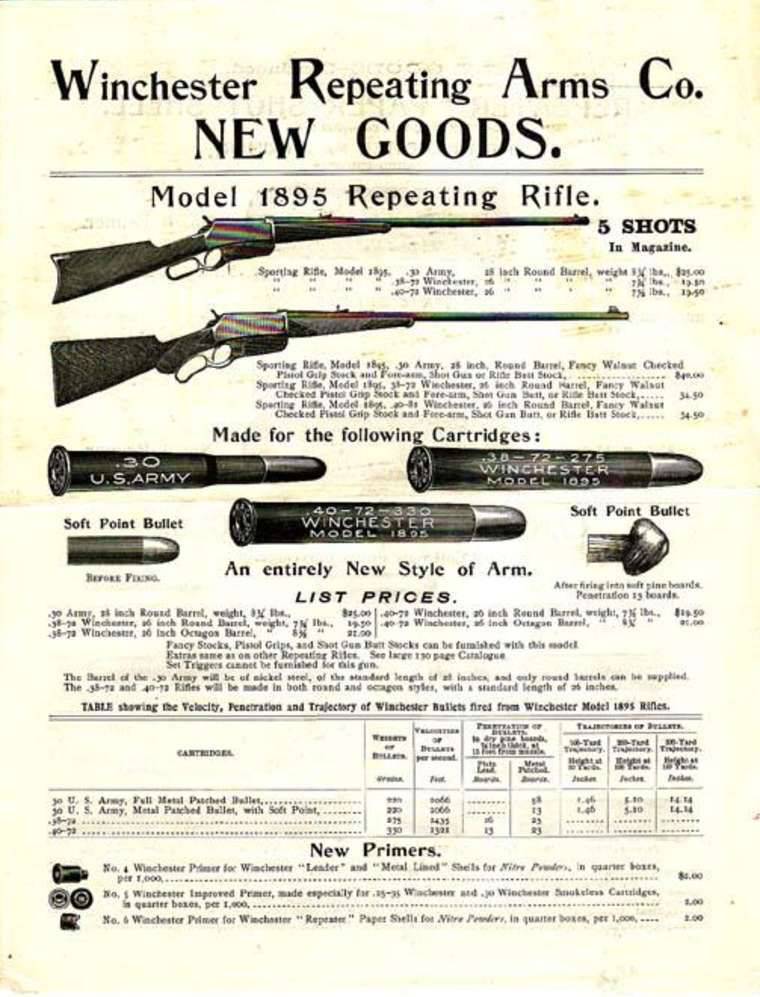 That is, the magazine could solve the problem for a lot of cartridges, and Benjamin Henry took care of it with his creation, and in 1860, he received a new patent for the cartridge rifle with an 15 charging magazine under the barrel. He replaced low-power bullets with a charge inside with cartridges with a ring ignition of the .44 caliber, and again it is clear with the ring one. After all, the bullet head of one cartridge was directly opposite the bottom of the other. And if there was a cap, then when you hit the butt on the ground could happen an accidental shot. 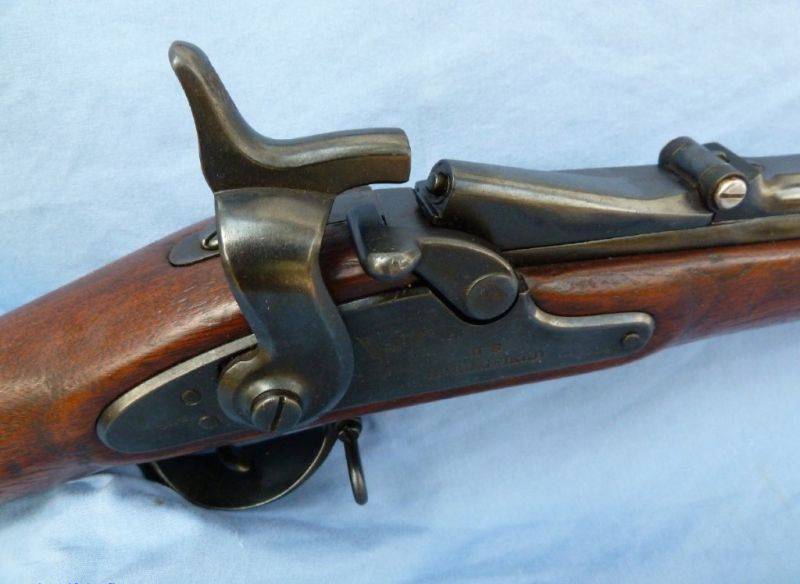 The shutter of the master gunsmith Erskine S. Allin, installed on the model 1861 of the year. Rifle "Springfield."

During the years of the American Civil War 1861 - 1865. This Henry rifle was used very actively. The advertisement claimed that “You can charge it on Sunday and shoot all week without recharging!” But it was still very inconvenient to charge - it could only be done while standing, and also through the slot running along the entire store from below ( moved the lever of the sleeve-pusher), there was dirt and dust. Yes, and the lever itself could move into the hand when moving, which could cause a delay in shooting, and the loading process was very long. To do this, the lever at the base of the spring needed to be pushed to the stop toward the muzzle of the barrel, fix, and then detach the lower part of the magazine from the upper one, move the upper part to the side so that it would not interfere, and insert the cartridges into it. Looking at the lever sticking out of the slot in the store, it was possible to determine whether a rifle is charged or not. That is, it was clearly not the best solution, although with a fully equipped magazine, its rate of fire reached 30 shots per minute. Something else was needed, and that was how the famous 1866 Winchester of the year appeared. 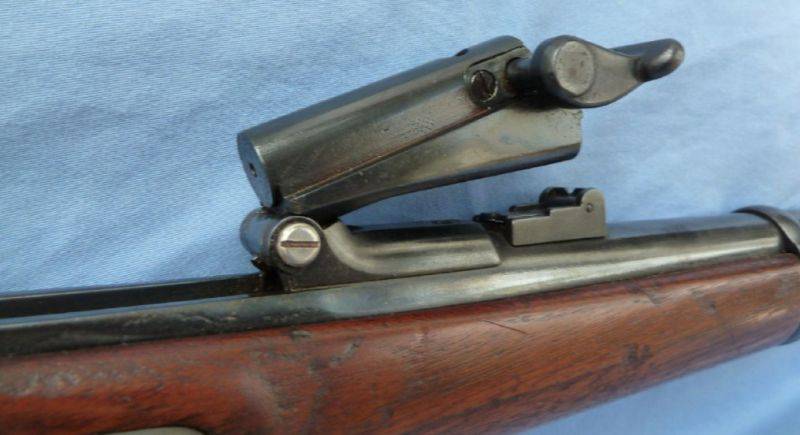 The same age of the “yellow guy”: single shot carbine mod.1866, “Springfield” with a folding shutter.

The main "highlight" was the spring-loaded door of the store, located on the receiver on the right. Now the store has become possible to charge "from the rear end", that is, holding the rifle in your left hand and not necessarily standing, but also lying (very comfortable!) And sitting in the saddle. 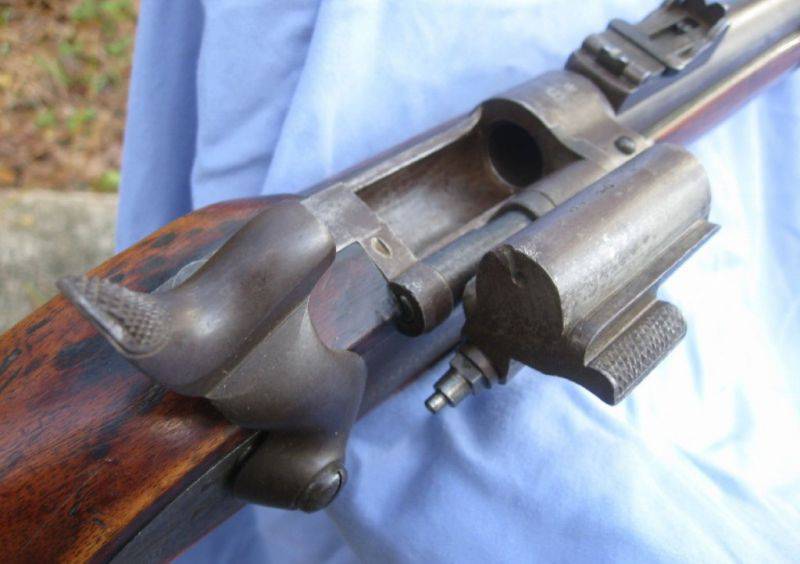 It should be noted that the successful Winchester system (well, he bought Henry's patent and released the yellow guy, i.e. 66 carbine) immediately brought to life well, just a lot of imitations, and now something about them is the time to tell a little more details. 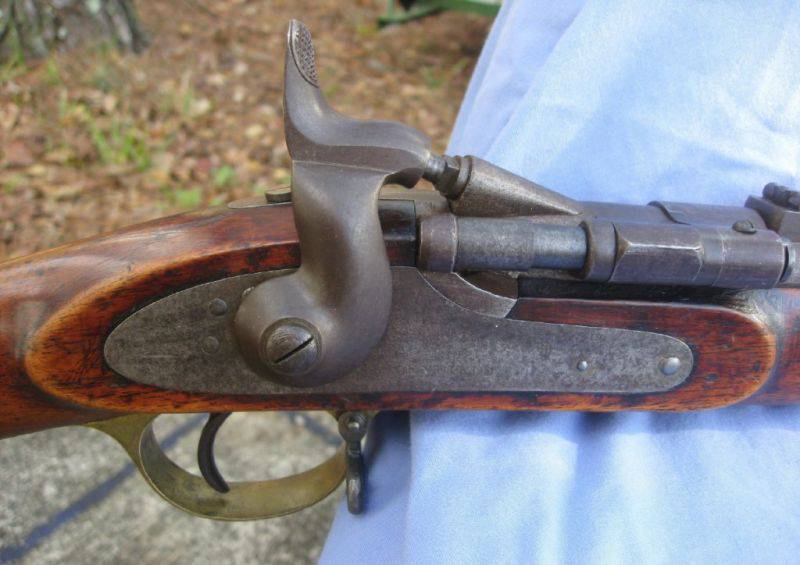 Let's start with a nearly identical copy of Winchester’s main rival, John M. Marlin, who in 1870 started with the production of revolvers and derringers, and eventually improved the hard drive. The main disadvantage of the latter was the shutter, which closed the shutter box on top and slid inside the grooves. The cartridge case was thrown upwards and sometimes hit the shooter’s face.

Marlin invented the U-shaped bolt and receiver, closed on top. When reloading, he also moved back, but at the same time a window was opened at the same time, through which the sleeve was also removed to the right. Thanks to this, it was possible to install an optical sight above the barrel of the Marlin carbine. Initially carbines were produced calibers .32 and .45 (7,7 and 11,43-mm), but then there were others.

Then A. Borgess of Oswego released his version of such a rifle. She has a noticeable whimsical lever, but the mechanism itself is similar to Winchester. In 1878, his rifle was tested, but recognized as fragile. Firms Schneider also did not remain aloof from participating in the development of this system and also proposed a bolt operated by a barrel-mounted lever. But when the valve was moved forward, the bolt did not move backward, but ... it went down in the grooves of the receiver. 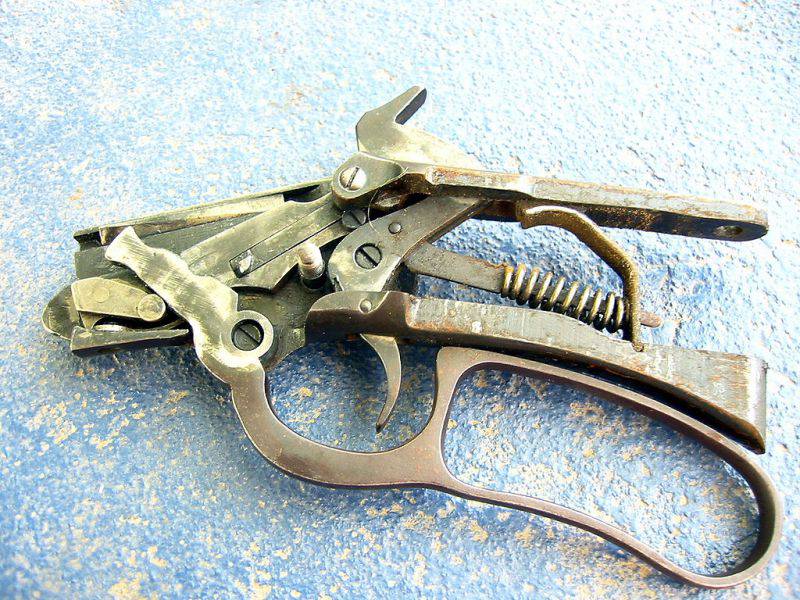 At the same time, a cartridge was fed to it, the bolt was raised, and a special lever (also known as an extractor) pushed it into the barrel. The rifle's rate of fire was at the level of the “Winchester” and “Marlin” firing rates and was distinguished by a very short gate box. Such a system was described in the English book by the designer Green Gun (WW Greener) “The Gun and its Development”, published at the end of the 19 century, and reprinted at the beginning of 20. Then information was borrowed from it by the famous weapon historian V.Ye. Markevich, already our author, and ... everything! 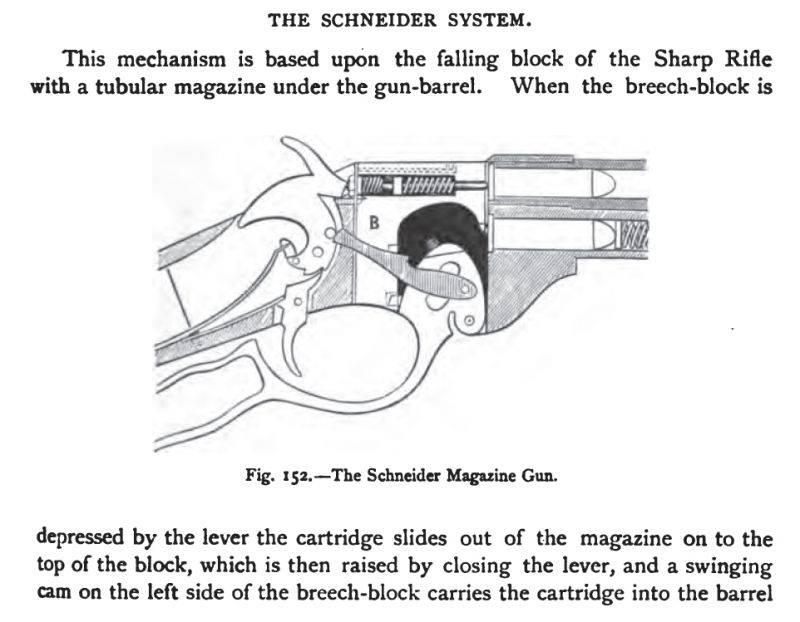 At the same time, K.Kh. Ballard of Worcester, Kentucky, also decided to have his say in the development of lever-operated rifles. He made an excellent ... single-shot rifle, which is still being sold, and then he came up with a paddle for multiply charging with a barrel gantry. And he acted, unlike all the others, on the principle “to do is simple - very difficult, and difficult - very simple”. The bolt from him was also controlled by a lever clamp, but “drove” inside the receiver due to the fact that the gear cutting on it was rolling along two gears! The benefit from this was that the bolt moved extremely smoothly, but then both the bolt and receiver were very long, and therefore heavy. Ballard rifles were released the following calibers: .32, .38, .44 (7,7, 9 and 11-mm), and then also .45 and .50. And if the hard drive cartridge 50-caliber contained 90 Grand. gunpowder then Ballard 115! That is, his rifles were more powerful! There were rifles with an under-barrel magazine on 5 and on 11 cartridges and, although they were in demand, they could not compete on equal terms with the hard drives.