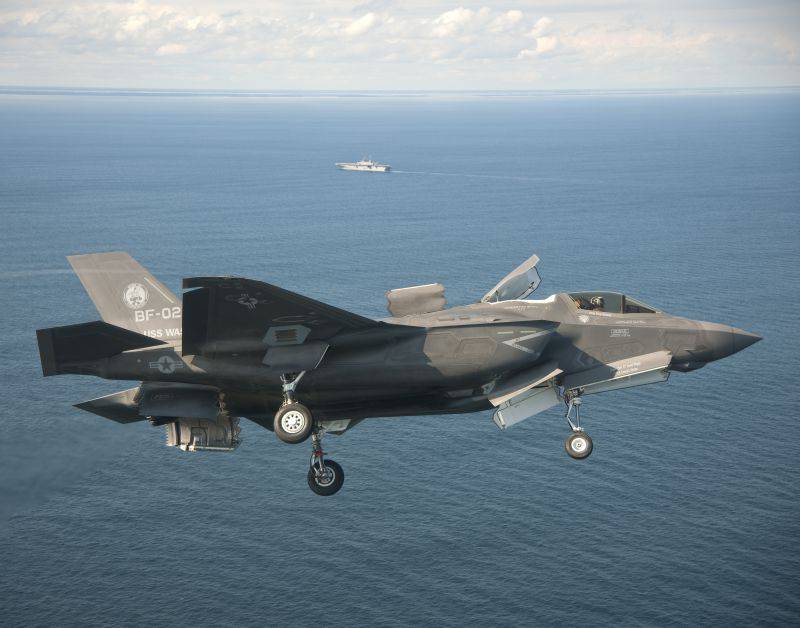 If we are so good and they are so bad

why is it so good and so bad?

F-35 issues and shortcomings articles are no longer perceived as they were before. Instead of gloating, only dry irritation with the course of work on the creation of fifth-generation Russian fighters.

The Russian reader is smart. He perfectly sees the contradiction between the stories about the “badly flying” F-35, built dozens a year, and the invincible PAK FA, which exist only in the form of six prototypes without avionics and the declared engines of the second stage. In fact, any comparison of the F-35 and T-50 comes down to a comparison of the performance characteristics of the serial fighters and the requirements set forth in those. task to the PAK FA. And may we still give way to reality, but surpass everyone in our dreams.

Every year it becomes more and more obvious a simple fact: so far no one has managed to create a prototype of a plane that is close in its “stuffing” and capabilities to the American “fifth generation”. Not to mention its launch into mass production (at least in the number of a couple dozen units). And, I am afraid that with the existing approach to the creation of the PAK FA, this gap will only continue to grow. It is necessary to stop "fooling around", releasing one plane per year, or even play ahead of the curve, creating even more advanced machines with a non-standard aerodynamic scheme (the real example is Bird of Prey). At least for the sake of prestige and demonstration of one’s own ambitions (hmm, but for the sake of which is PAK FA being created?).

As for the ridicule of the American "Penguin", then it's a bad thing. Objective facts and nothing else.

1. The most powerful and efficient engine in stories fighter aviation

The empty mass of the F-35A is 13,3 tons. The actual take-off weight depends on the specific configuration. It is customary to engage in air combat with relatively light SD air-to-air class with a reduced fuel supply (50% or less). In other words, the F-35A thrust ratio in the fighter version should reach unity.

As for the absurd accusations of “unreliability” of a single-engine aircraft, let us turn to the MiG-21, Mirage III and F-16. The masterpieces of world aviation industry, past all regions of the planet.

It is equally effective in detecting targets on the ground and in the air. With the possibility of mapping, simultaneous operation in the air-to-air and air-to-surface modes, with the presence of a low interception probability mode (low-energy pulses in a wide frequency range) and all that a modern radar should be able to do.

And even a little more.

According to common images (of course, made not without the help of Photoshop), the AN / APG-81 radar is capable of inspecting selected areas of the terrain with abnormally high resolution (30 x 30 cm). So clearly that the outlines of people and various techniques become visible. 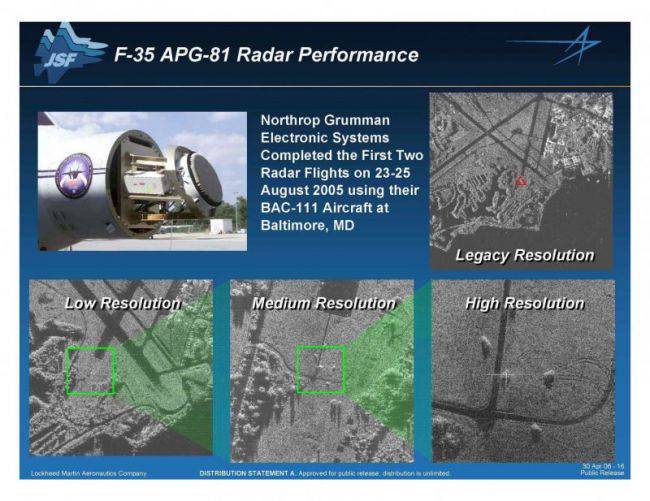 The creators of the radar explain the effect achieved by the AFAR technology in the presence of unique signal processing algorithms, for example, extracting useful information from the noise reflected from the side lobes of the AFAR.

Unlike other radars with active phased arrays, the APG-81 station is a separate development, not an improvisation based on outdated radars with passive phased arrays. With a modern signal processor and data transmission bus optimized for AFAR high capabilities. There are only two such radars in the world. This is the mentioned APG-81 and its predecessor - APG-77 from the Raptor fighter.

Its elements fully define the look of the F-35. At the same time, unlike the outdated F-117, the techniques for reducing the visibility have little effect on the aerodynamics of the new “stealth”.

About how these measures are able to reduce the visibility of the aircraft, described in detail in previous articles.

According to the video materials of Lockheed Martin, the F-35 fully maintains controllability at an angle of attack of 50 °.

He is able to fly “tail forward”, while maintaining controllability even at supercritical angles of attack (110 °) and, if the pilot so desires, to confidently return to horizontal flight.

It would be strange if he could not do all this, having such a powerful and perfect engine as the “Pratt Whitney” with the 19 ton burden.

Overload limitation - 9g. The design has an integral layout, in which a significant part of the lifting force is formed by the fuselage itself.

All-view IR detection system. Futuristic helmet with the ability to observe “through” the plane. Modification of the F-35B with the possibility of a shortened take-off and vertical landing. F-35C ship-based fighter with titanium elements of the fuselage, tail hook and wing of increased area. In-flight refueling system of the “boom” type (F-35A) and “hose-cone” (for F-35B and 35C).

Up to four medium / long-range air-to-air missiles (AIM-120 AMRAAM), or two to four guided bombs (for example, 113 kg planning SDB with max. Launch range 100 km) in combination with an Air-to-Air UR ”, Either two heavy air bombs or cruise missiles (as an option, 907-kg bomb Mk.84 with a GPS kit (JDAM), planning high-precision JSW ammunition with 681 kg or anti-ship missiles JSM).

The ammunition of the built-in four-barreled 25-mm cannon - 180 shells. In the suspended version - 220 shells.

A few words about things not related to the technical appearance of the aircraft.

At the same time, various speculations in the style of “flying for nine years, but not adopted for service” can be stopped. Just as the serial Su-27 de facto entered the troops from the mid-80-s and even participated in “battles” (the collision of the Su-27 and the Norwegian “Orion” during training interception over the Barents Sea, 1987 year), but weapons “Drying” officially adopted only in 1990.

As of the beginning of summer, the 120 “Lightning” had three modifications in the US armed forces, excluding the 20 test and experimental aircraft owned by Lockheed Martin. Fighters were deployed on 10 air bases in the United States.

19 March 2015, at the Luke airbase, the F-35 pilot training center opened. By the summer of admission to piloting Lightning, we already had over 200 pilots with a total 30 000 X flight. Not a single broken and lost aircraft for all 9 years of operation in the harshest conditions (swinging ship decks, night refueling in flight, group maneuvering). 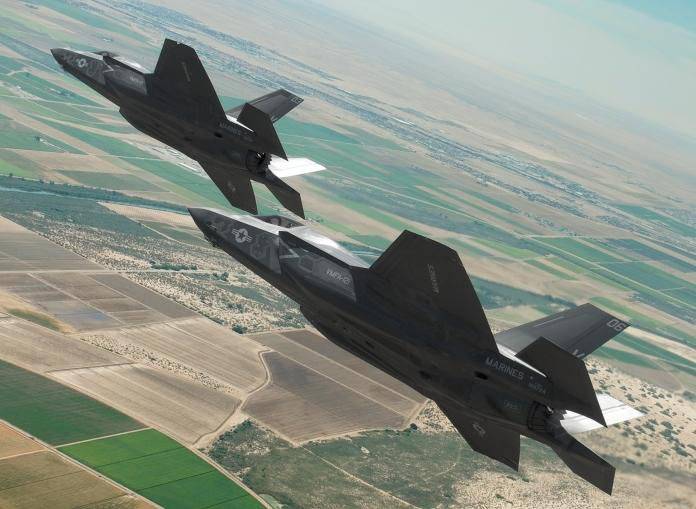 On September 23, the first squadron equipped with F-35 fighters was formed at Hill airbase.

September 8 - F-35 debut at the Italian Cameri airbase (Italian Air Force aircraft assembled at an Italian factory). The first flight of the F-35 outside the United States.

October 6 - the first flight of the F-35, built for the Norwegian Air Force. The flight from the factory in Fort Worth to the airbase Luke.

October 19 - Canadian Prime Minister announced a possible withdrawal from the F-35 program. A number of media outlets hurried to announce the collapse of the F-35 project, without paying attention to a couple of circumstances. First, no one from the participating countries has left the project (Canadians can be the first). Secondly, what does the 65 fighter mean for the Canadian Air Force against the background of the entire JSF program (the 3109 fighter, of which only one fifth is exported).

Sadly, Lightning is the cheapest of the 4 + and 5 generation fighters.

First, the engine. The most complex and time-consuming to maintain element of the structure, on which everything depends. In “Lightning” he is alone. Domestic fighters traditionally have two of them.

Secondly, the volume of production, calculated in thousands of aircraft. Everyone knows that mass production is ALWAYS cheaper.

The cost of research and development work on the JSF project amounted to 59 billion. Obviously, part of this cost is incorporated in each of the built fighters. What should be the cost of development of the PAK FA, so that the final cost of the fighter equals the American F-35? Based on 60 serial T-50 (optimistic scenario).

The 1 trillion, which scares the man in the street, concerns the entire life cycle of the F-35 program - R & D, production of thousands of aircraft, their maintenance, spare parts and fuel. Weapons, pilot training, airbase retrofit costs.

Considering the fact that F-35 replaces most types of aircraft, the indicated trillion is the cost of existence of the US Air Force for the next 30 years. Expensive? So they now eat no less. After all, the world's first consumer of aviation fuel.

The estimated cost of producing one unit of F-35A per 2018 year is 85 million dollars (taking into account inflation). Cheaper only Chinese plastic crafts.

As for the notorious "electronics" and the possible disruption of computers, the failures from which the planes go crazy, are only in Hollywood films. In reality, electronics is the most reliable element of any system, completely insensitive to overloads, mechanical shocks and vibrations.

A computer can be reprogrammed in the hangar of an air base, as opposed to a thrust vector-controlled engine (translational movement of parts under conditions of a thousand-degree temperatures). Here, even a block repair can not do. Whenever necessary, the domestic Su-35 shines sending to the manufacturer. It is easy to understand how all this affects the cost of manufacture and operation.

All those who were not convinced by these simple and obvious things can continue to retell the tale of a terribly expensive plane at the price of a piece of gold. 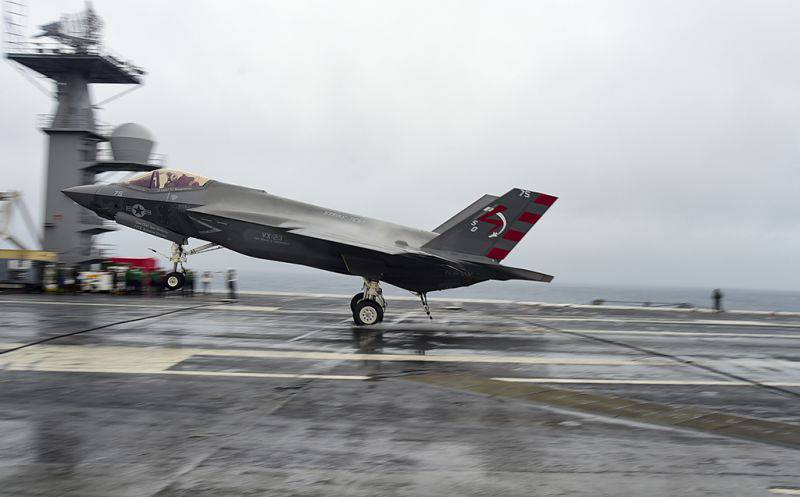 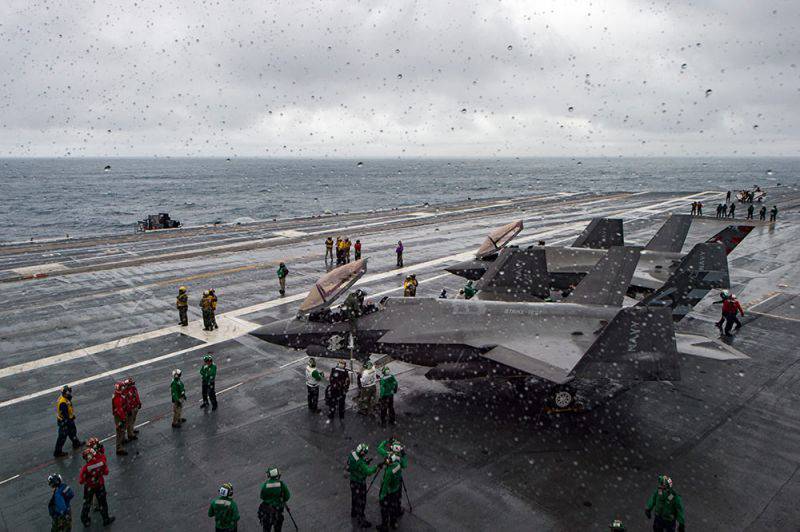