October 30 2015
23
With a delay of several months relative to the originally planned deadlines, the Pentagon selected a company to develop and build prospective strategic bombers. Thus, the first stage of the LRS-B program, which has continued over the past few years, has recently ended. In addition, it should be noted that the LRS-B program was a further development of several previous projects with different names. The choice of the contractor opens up a new stage of the project, the result of which will eventually be the appearance of the first production aircraft.


October 27, the US military announced the results of a competition for the development and construction of long-range bombers LRS-B (Long-range Strike - Bomber). Two groups of companies formed by leading American enterprises applied for a contract aviation industry. One of the projects was presented by Lockheed Martin and Boeing, the second was developed by Northrop Grumman. For a long time, air force and defense ministry specialists analyzed two proposals. Based on the results of their comparisons, the winner of the competition was selected.

According to the latest data, Northrop Grumman received a contract to continue the development of the project and the subsequent construction of serial bombers. Her project suited the customer and, apparently, exceeded the offer of Lockheed-Martin and Boeing companies in some parameters. Thus, the largest American manufacturers of aviation equipment were left out of the program. 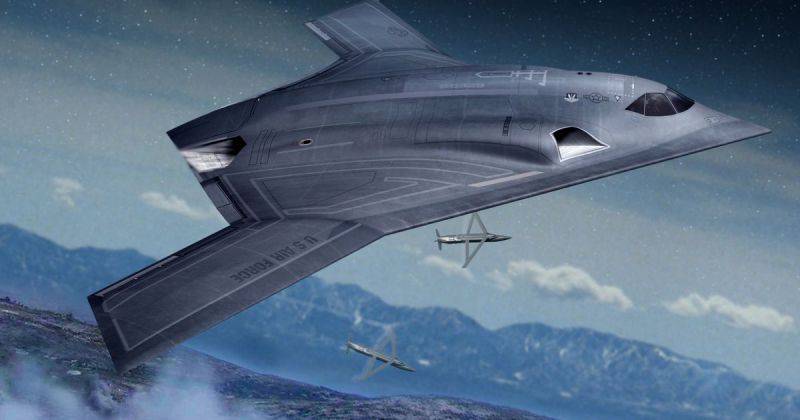 Aircraft LRS-B in the representation of the artist

A few days before the announcement of the winner of the competition, October 22, Assistant Air Force Minister William La Plant revealed some details of the current plans for the construction of new equipment. In the foreseeable future, it is planned to build about four prototypes. In the future, small-scale production will be deployed. For several years, the contractor will build five small lots, a total of 21 aircraft.

Also, a representative of the Ministry of the Air Force recalled existing plans for the cost of new equipment. Each of the aircraft will cost no more than 550 million dollars in 2010 prices of the year. Such a price implied the construction of hundreds of aircraft.

According to the latest data, Pentagon experts change the financial requirements for the project. Now the price of one LRS-B aircraft is estimated at 511 million 2010 dollars. In terms of inflation and other factors, the cost of one bomber will be 564 million dollars in 2016 prices of the fiscal year. Due to currency fluctuations and other economic factors, the cost of equipment will probably be adjusted in the future.

Plans for the number of vehicles required by the air force did not change. As before, the Pentagon wants to get the 100 latest aircraft. Their construction will continue for some time. The approximate dates of commencement and completion of mass production have not yet been clarified.

In addition, the subcontractor for the project, which will develop new engines for bombers, remains unknown. Previously, some assumptions were made on this subject, but no official data has yet been published.

Shortly after the announcement of the results of the competition, Lockheed Martin and Boeing published their official comment. Both firms are disappointed with the decision of the military. It is planned to hold some consultations with the customer, according to the results of which the companies will choose their future strategy. Consortium specialists are interested in the reasons for which his proposal could not convince the customer. In addition, the official commentary mentions that both companies have extensive experience in developing strategic bombers, and also have all the capabilities necessary for their construction.

The LRS-B program aims to upgrade the material part of the air force. Currently, the Air Force has a fleet of heterogeneous strategic bombers that do not fully meet the requirements of the foreseeable future. Of the available aircraft B-52, B-1B and B-2 in the future in the ranks will be only the last. The rest of the equipment is proposed to be replaced by promising LRS-B aircraft.

If current plans are successfully implemented, US strategic aviation will use two types of bombers - B-2 and LRS-B. It is already noted that a promising aircraft will be significantly cheaper than existing B-2, both in terms of the cost of individual aircraft, and at the price of the entire program. According to some reports, it is planned to spend about 23,5 billion dollars on the development of the LRS-B project. In addition, the price of each such machine should remain within the 550-560 million dollars. For comparison, each B-2 cost about 1,5 billion.

The development of a promising strategic bomber started a long time ago. For several years, the project has changed a number of names, in addition, the requirements for technology have been adjusted. All work on the LRS-B program is conducted in an atmosphere of secrecy, which is why most of the information about promising aircraft has not yet been announced. However, some details of the requirements for the project have already become public knowledge and have led to many disputes.

Even after the announcement of the results of the competition, the company-developer is not in a hurry to publish any details of the project. For this reason, in the latest promotional materials there are no images or hints on the appearance of the new aircraft. So far, such materials are illustrated only by drawings of existing equipment.

Any confirmed information about the appearance of the aircraft LRS-B is not yet available. However, there is some information that may be of great interest to professionals and the general public. In addition, they allow you to create a preliminary picture, which, however, may seriously differ from the results of the project.

According to unconfirmed reports, the United States Air Force wants to get subtle subsonic bomber with a number of characteristic features. This machine should be able to break through the enemy’s air defense, including those equipped with modern means of detection and armament. The nomenclature of aircraft armaments should include the usual and highly accurate weapon. In addition, it does not exclude the possibility of using LRS-B as a carrier of nuclear weapons.

It was mentioned earlier that the military and industry representatives are considering the possibility of further deep modernization of the bomber in order to improve its combat performance. To do this, troops must first receive a manned aircraft that meets current requirements. Then a modernization project may appear with the installation of remote control systems, due to which the manned bomber will be transformed into an unmanned aerial vehicle.

The most popular is the version according to which the promising LRS-B aircraft will be based on the “flying wing” scheme. This architecture has already been used by Northrop Grumman in the previous B-2 project and has proven itself well. Its main advantages are the possibility of providing high flight characteristics, as well as minimal visibility for radar detection equipment.

It is hardly necessary to doubt that the aircraft will be equipped with a new type of turbojet engines. However, the characteristics of such products remain unknown. Moreover, no engine developer has yet been announced.

The “flying wing” scheme, with all its advantages, imposes certain restrictions on the flight characteristics of the aircraft. Thus, the promising LRS-B will be subsonic, but its range may exceed 10-12 thousand km. By refueling in flight, the range can be further increased. In the unmanned aircraft version, the bomber will be able to stay in the air even longer, which will contribute to the absence of the need to ensure the required working conditions for the pilots.

It can be assumed that the need to create an unmanned aircraft modification affected the choice of the winner. The company Northrop Grumman has a solid experience in the field of UAVs and has created a number of projects of such technology, some of which have already reached mass production and are used in the military. Thus, in the future, the company's specialists will be able to use the available experience when modernizing a manned strategic bomber.

The contract for the LRS-B program is of great importance to the contractor. Currently, Northrop Grumman is present mainly in the UAV sector, while its work in the field of manned aircraft is associated only with B-2 bombers. Now the company will be able to increase its share in manned aircraft, as well as regain lost ground. All this, however, will not lead to a fundamental change in the situation on the market.

The Pentagon has chosen a contractor who will have to develop a new aircraft and establish its mass production. The most important stage of the entire program has been completed, but it is still far from its end. The development of a full-fledged project, the construction of a prototype and its subsequent testing will take several years. This means that the LRS-B project will not cease to be a topic for fresh News. New reports on its progress may appear in the very near future.