Remington: the simplest rifle in the world!

November 2 2015
67
It is said that 80% of men in the soul of the killer. And it is quite possible to believe this, if we recall our thousand-year biological history: men hunted for game, and women collected cereals. It is therefore not surprising that we are pleased to keep weapon in his hands, have him at home, read articles about him in magazines, and even shoot himself out of him - what could be there. And every man has, in general, his favorite sample - someone has an army machine gun (“love of youth”), someone bought an expensive Winchester in the states for bucks (“just like in cowboy movies”), and somebody else. I personally really like ... Remington rifles with a folding bolt (or with a crane, so they say). However, for some reason, we don’t have much to say about offensively, although in the history of the armed struggle of the late XIX - early XX centuries. she had a chance to play a very important role!

Well, the story of this weapon will need to start with the thought that one of the quirks of the history of technology is that a good idea often occurs to different people in the head, and at about the same time. But more often it happens that a good idea of ​​one is used by a completely different person. And that's just the story of the Remington rifle from this number. And, by the way, she is very instructive in all respects. 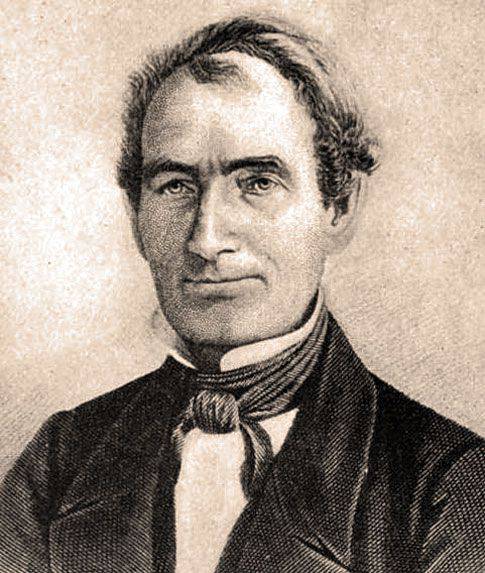 Eliphalet Remington himself was born on October 28 1793 of the year, and 12 August 1861 died. Like many other Americans, he was born in a family of immigrants from England, who left to seek happiness overseas. Becoming a blacksmith, at the age of 23 for years, he made a good rifle for which he forged a barrel, and bought a mechanism from a visiting merchant. And since I liked the rifle, and it worked out the technology, the only thing was to open its own manufacturing company, which he did. The firm was called "E. Remington and Son. 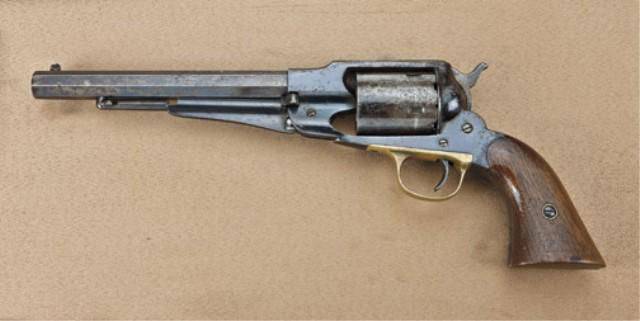 The company was officially registered in the city of Illion, in the state of New York in 1825. Father and son worked together for 19 years, after which they took on the nephew of Elipalet Sr. - Philo Remington. And then two more sons of the company's founder, Samuel and Elipalet the Third, joined the family business. 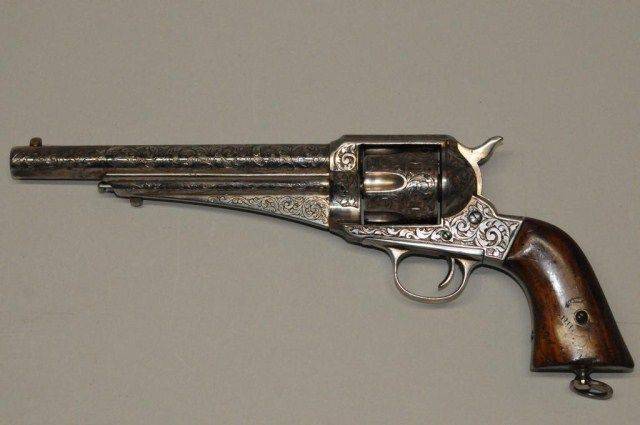 After that, the company was renamed “E. Remington and Sons. " Under this name, the company worked until 1888, until the reins of the grandsons of the company's founder, Graeme and Gartley Remington, were taken over. The brothers decided that the “Remington Arms Company” sounds more solid than the previous name, invented by their grandfather, and, without hesitation, changed it for the third time. Under this name, it still exists today, however, it no longer only releases weapons.

For the first time, the company became famous thanks to the revolver created by 1863, which competed with Colt himself (he, by the way, was already dead at the time!) And was adopted by the American army. The success of the revolver, which had an integral closed frame in contrast to the Colt revolvers, led its owners to the idea of ​​releasing also revolver carbines of the same system. Well, and at almost the same time with this revolver and its revolving rifles, the company released its world masterpiece - the cavalry carbine with the so-called crane bolt or “rolling block” bolt, as the Americans themselves call it.

And it was not Remington and not his sons who invented it, but one Leonard Geiger. For a long time they thought that he was an employee of Remington. However, thanks to the new research done by Ed Hull, it became known that Geiger not only did not work for the Remington family, he may even have never met them.

The bolt and trigger carbine arr. 1865 of the year.

But Joseph Ryder was indeed an employee of Remington and he developed his own shutter almost simultaneously with Geiger. In any case, the similarities between the ideas of Geiger and Ryder are evident. Ryder received his patent on 15 Nov. 1864 of the year. Geiger - April 17 1866. And here, instead of suing, the Remington firm bought patent rights from Geiger. Geiger’s two brothers were enriched on this, but the bolt of Joseph’s design was now called “Remington” by everyone! 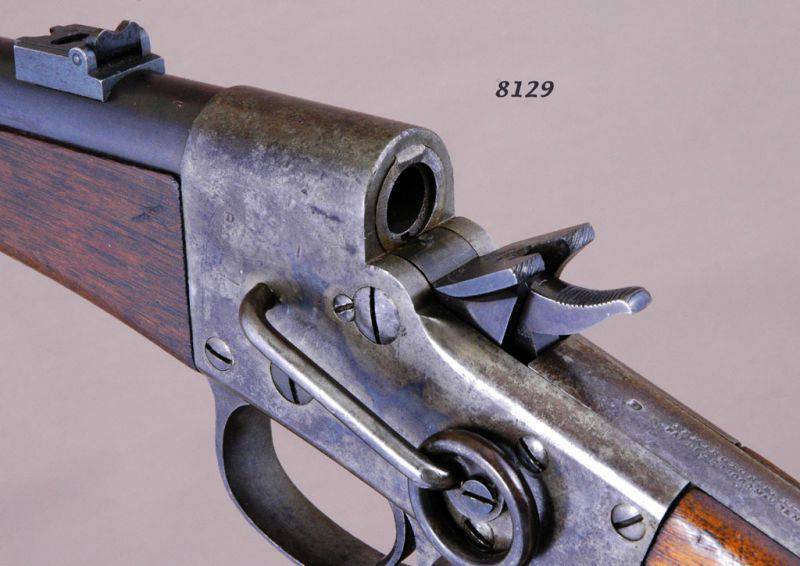 The shutter is open.

However, the company managed to produce rifles under the Ryder patent, which received the designation “Carabiner of the old model”. In March 1864 of the year, the federal government ordered 1000 of such .46 carbines (11,6-mm) for ring-ignition cartridges. In December, the contract was revised, and the order increased to 5000 copies. The first 1250 was released in February, 1865, more than 1500 was produced in March, and the final delivery was made on 30 April 1865. At the same time, Remington signed the second contract (in October 1864 of the year) on 15000 carbines, known as the “second model”. They were designed for a more powerful .50 caliber cartridge (12,7-mm) Spencer also ring ignition, which were used in the seven-charge carbine 1865 model of the year. The first 1000 was delivered to the army in September 1865 of the year, five months after the cessation of hostilities. The remaining 14000 carbines were manufactured by March 1866, and the army declared them redundant. Therefore, in November, the company 1870, the company bought the entire supply and sold the rifles to France, where they were used during the Franco-Prussian war!

Successful weapons were carbines. Anyway, for riders. That carabiner "Remington Sporting" in the fateful battle with the Indians at Little Big Horn in 1876, was armed and General Custer. Already the general (albeit, who fought there with the rank of colonel), probably could afford any weapon. But I chose the non-patriotic Bulldog large-caliber revolvers and ... the Remington single-shot carbine!

Well, the crane gates themselves were also produced not by the Remington Company, but by the Savage Company from Middleton, Connecticut. That is, everything was as before, when Eliphlet Remington himself forged the barrels to his rifles!

Well, now look at the technique itself. After all, before us, undoubtedly, the most ingenious shutter for a rifle of all times and peoples, and there is simply no equal to it in its completion, simplicity and reliability. 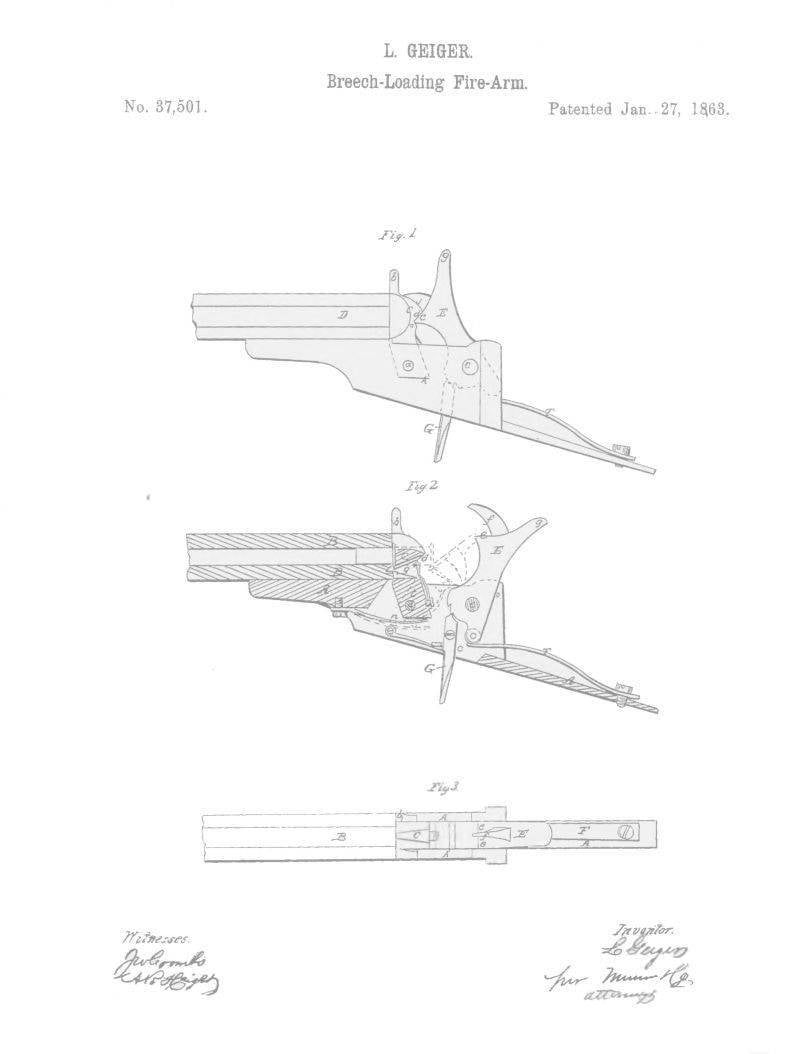 Let us turn to the Geiger patent, because everything is very clearly visible and understandable in the drawing from it. What immediately bribed Remington’s gunsmith technologists, this shutter is its simplicity and high manufacturability. After all, the entire shutter consisted of only three main parts, two axes and four springs, not counting the screws. The bolt itself had the shape of an inverted P, well, and the trigger for the cartridge with a circular ignition was typical of its time and consisted of a needle and a striker. Both of these parts were large and therefore durable, rotated on massive axes, so there was simply nothing to break in the bolt! In this case, the trigger pulled into the middle groove of the bolt and, in fact, in the closed state was one with it.

Fastening the axles of the shutter with one screwed plate. After its removal, they could be easily pushed out and the bolt and trigger removed.

This shutter acted like that. In order to make a shot, it was necessary to pull the trigger back with a thumb. At the same time he was kept in this position with a trigger. Then the U-shaped bolt was retracted, which had been cut under the fingers on its protrusions to the left and to the right. Now it was possible to insert a cartridge into the barrel and press it with a bolt, spring-loaded from the bottom with a special spring. After that, it remained to aim and pull the trigger. The latter entered the bolt, tightly supporting it in such a way that no recoil force could jointly throw them back, and at the same time with its striker struck the rim of the cartridge.

A shot followed, after which everything had to be done in reverse order. In this case, the extractor pushed the sleeve from the barrel, and the rifle was ready for reloading.

From 1867 to 1896, Remington has produced a huge number of rifles and carbines for cartridges with black powder. For example, in 1869, only Turkey alone delivered 125000 rifles of this system.

One of the many models of the Remington rifle.

And then the Berdanovsky cartridge of the central battlefield appeared, and the company had to remake its bolt to the novelty. It all came down to the following changes: for example, the bolt acquired the form of a trigger, inside of which the channel for the striker passed. On its right side, a curved plate ("needle") was installed to retract it. And this is all change! Now the trigger struck the striker and, just as before, it was tightly locked in the dead center. 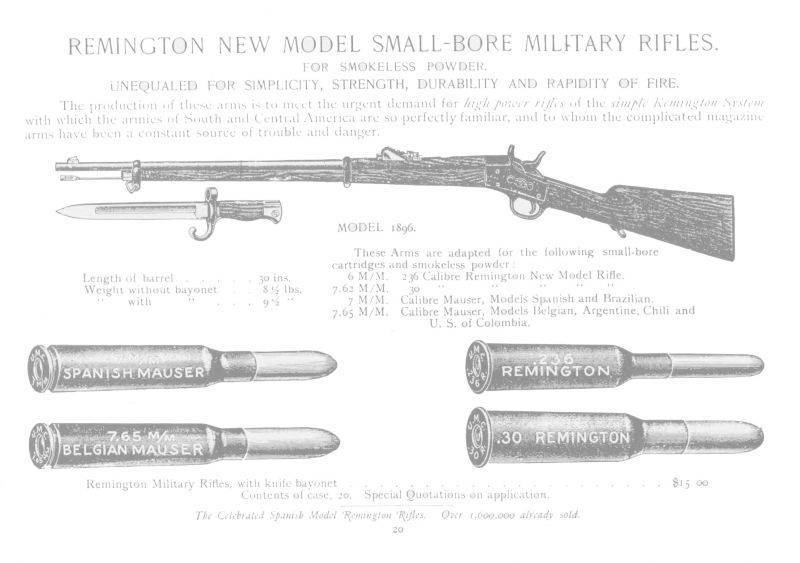 Moreover, despite the fact that in the 1896 year many countries had already switched to multiply charged rifles, Remington still produced single-charge batteries, but already for cartridges with smokeless powder and sold them all over the world. Rifles were manufactured in the following calibers: 6-mm (.236 caliber "Remington"), 7-mm for Mauser cartridges for Spain and Brazil, 7,62-mm (.30 caliber for USA), and 7,65-mm for Belgium, Argentina, Chile and Colombia . What lured? Cheap - because the cost of a rifle was only 15 dollars with a bayonet. And high combat qualities. For example, the length of the barrel was emphasized - 30 inches, despite the fact that she herself was shorter than many others, and her weight was about 4 kg with a bayonet. The rifle's rate of fire was higher than that of many store samples and reached 15 rounds per minute.

The sighting range was 900 meters, although some rifles had sights and 1280 meters. To disassemble and clean it was also easy and convenient. Both axles of the trigger and bolt were kept from falling out of a special plate on the left side of the receiver with a conventional screw. It was enough to unscrew it, both of these axes hammer out, as well as the bolt and the trigger were easily removed, and the barrel could be cleaned on both sides! As a result, even the papal guard in the Vatican made her their own service weapon! 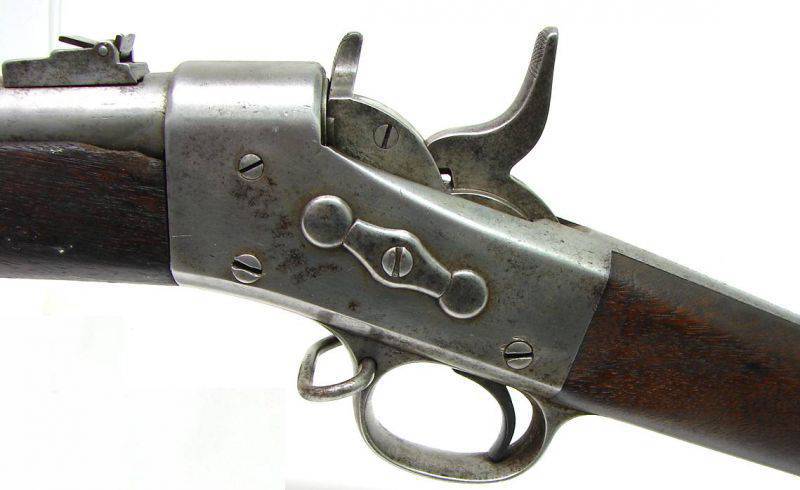 Remington rifle .50-70 caliber of the National Guard of New York.