From the cannon to the moon


Our publicists often repeat that the beginning of the Great Patriotic War we met with excellent a tank T-34, a magnificent Il-2 attack aircraft and a wonderful Katyusha BM-13 jet mortar. However, almost nothing is said about first-class artillery, most of which was developed before the war. We are talking primarily about the guns of the outstanding designer Vasily Gavrilovich Grabin.

Among all the artillery designers, he had the highest military rank - Colonel General of the Technical Troops, as well as the highest number of awards and titles: Hero of Socialist Labor (one of the first), four times winner of the Stalin Prize 1 degree, holder of four Orders of Lenin, orders of the October Revolution Revolutions and the Red Banner, the Suvorov Orders 1 and 2 degrees, the Red Star, two Orders of the Red Banner of Labor, many medals.

Vasily Grabin was born in 1900 year in the village of Nizhnetebliyevskaya Krasnodar Territory. After graduating from the Krasnodar command courses, he was sent to Petrograd at the Military School of Heavy and Coastal Artillery. There he graduated with honors from the Military Technical Academy of the Red Army named after Dzerzhinsky. From 1931 of the year - Designer in KB No. 2 of the All-Union Arsenal Artillery Union (VOAO) of the USSR People's Commissariat of Heavy Industry. In 1932, he is appointed first deputy chief of the artillery GKB-38, located in the village of Kalininsky (now Korolev).

“The combination of the royal OKB-1 and the Grabinsky Central Research Institute-58 allowed to expand the scope of work on space issues”
In 1934, Grabin with a group of engineers from his department was transferred to Gorky to the new plant number 92. I.V. Stalin. There he became the chief designer, bringing together under his leadership not only the developers, but also all the technologists of the plant.

Here, and then in Kaliningrad near Moscow, a whole arsenal of divisional, tank, anti-tank, self-propelled, battalion, regimental, casemate, mountain, sea, anti-aircraft, aviation and special artillery systems of caliber from 37 to 420 millimeters, superior to similar foreign samples, or at least not inferior to them.

The divisional ZIS-3 became the most massive cannon of the Second World War, while the legendary thirty-four was armed with the Fragments X-NUMX and ZIS-C-34. In terms of quality, they were superior to the Germans, considered the best in the world; the divisional ZIS-53 remained the best 3-mm instrument of World War II. The fact that the Germans at the beginning of the Great Patriotic War, due to their lack of anti-tank cannons, similar in characteristics to the Russians, reworked trophy 76-mm divisional F-76 into anti-tank, also speaks about the highest level of grabish articles.

Vasily Grabin substantiated and for the first time in the world applied the method of high-speed integrated design and manufacture of artillery systems based on the unification and reduction of the number of parts and assemblies, using the principle of equal strength and similarity of designs, combining design, development of the technological process and testing, as well as upgrading machine equipment for efficient production . Due to this, at the 92 plant, the production of tools for the first time put on the conveyor increased compared to the pre-war one: in December, 1941, five times, a year later, 16 times, in March, 1943, 18, which is equivalent to construction , provision of equipment and qualified employees of 15 – 16 of similar enterprises (a fantastic achievement for that time, not to mention the current one).

The resolution of the State Defense Committee on the establishment of the Central Artillery Design Bureau (CACB) in Kaliningrad under the leadership of Vasily Grabin was issued on November 5 of the year 1942. The main task of CACB was the design, manufacture and comprehensive testing of new and improvement of existing samples of all types of tools. It was entrusted with the development of drawings, specifications and other documentation, as well as standards for components and parts of artillery systems for organizing production in the shortest possible time. 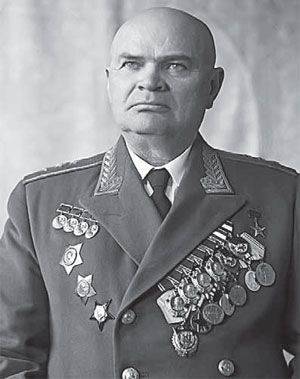 The base of the bureau was about 300 employees (engineers, technicians, technologists and workers) of the department of the chief designer of the Gorky plant No. 92 them. JV Stalin, who together with Grabin at the beginning of 1943, moved with their families from Gorky to Kaliningrad. In the summer of 1943, a group of specialists from the artillery mills of Leningrad and Stalingrad, previously evacuated into the interior of the country, arrived at the Central Design Bureau.

The TSACB itself is located on the territory of the branch of the plant No. 88 (the former territory of GKB-38, from where Grabin left for Gorky in 1934 during the year with 13 designers). Now it is the territory of the second production of RSC Energia to them. S. p. Queen. In the southern part of Kaliningrad, a shooting range was equipped.

In thematic plan, TsAKB on 1943 was registered over 50 projects a year - regimental, divisional, anti-aircraft, tank and casemate guns, guns for self-propelled guns, ships and submarines, mortars of various calibers and more.

Until the end of World War II, TsACK were developed with the subsequent adoption of the 76-mm gun for the most massive Soviet self-propelled unit SU-76, SU-76М, 85-mm ZIS-С-53 for the best tank of the Second World T-34, the most powerful 100 -mm anti-tank BS-3.

After the war, 57-mm automatic anti-aircraft towed C-60 and its paired version C-68 for ZSU-57-2 based on the medium T-54 tank, as well as powerful 180-mm C-23 are created in TsACB. In addition, several dozens of prototypes of the latest anti-tank, tank, divisional, anti-aircraft and aircraft guns, as well as heavy-duty howitzers and mortars were manufactured and tested. About a dozen anti-tank guns are born: from battalion 57-mm C-15 to super-power ones. Among them, the C-40 system with a cylindrical barrel, the projectile of which, having an initial speed of more than 1330 meters per second, punched normal to 500 meters of 258-mm armor.

Grabinsky C-23, C-72, C-73 exceeded in their ballistic characteristics all the powerful guns of the Germans and our allies, and most importantly - turned out to be more mobile, that is, they were transferred more quickly from the traveling position to the combat position and almost did not require engineering equipment of positions.

With the beginning of the Cold War, the leadership of our country decided that artillery had outlived its century and missiles should come to replace it. Therefore, most products CACB, brought to the prototypes, and did not adopt.

After the war, besides artillery bureaus, the bureau developed, manufactured and tested:

high-speed molding machines for the production of window glass, presses for the production of silicate bricks, self-propelled cable layers (1944 – 1950);
a series of research water-cooled atomic reactors for thermal neutrons UFFA-MSU, which were supplied to research centers of the USSR, as well as to Czechoslovakia, Hungary, GDR, Romania and Egypt, a fast-neutron reactor with a liquid metal coolant with a thermal power of about 5000 kW for Institute of Physics and Power Engineering (Obninsk), projects of a fast neutron atomic reactor with a thermal power of 50 000 kW - BN-50 for research purposes and a nuclear gas turbine installation on a XNU mercury vapor MX kW for spacecraft (5 – 1954);
prototypes of launchers and transporting installations of the first Soviet solid-fuel tactical missiles Mars and Luna capable of carrying nuclear warheads, as well as solid-fuel anti-aircraft missiles (C-134, C-135 launcher) for the military 2К-11 air defense system "Circle "And solid-fuel anti-tank guided missiles (ATGM) on the theme" Dolphin "(1956 – 1959).

Transition to the space front

By order of the State Committee on Defense Technology at the Council of Ministers of the USSR from 3 in July 1959, work on solid-fuel long-range ballistic missiles was instructed by the Special Design Bureau-1 S. P. Korolyov to include TsNII-58 in its composition (by that time the CACB changed its name several times: TsACB - TsNIIAV - NII-58 - TsNII-58). 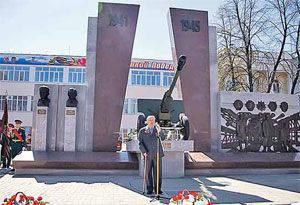 After the institute joined the OKB-1, Grabin taught at the Moscow Higher Technical School. Bauman (1960 – 1971) at the department of special technologies.

From the middle of the 50-x, on the initiative of N. S. Khrushchev, all Russian artillery design bureaus and factories are gradually moving to the rocket theme. However, some design bureaus in 50's were simply closed (OKB-172, OKB-43, and others). This short-sighted campaign had a significant impact on the development of artillery in the USSR, and only in 1970 did the leadership of the Ministry of Defense Industry revive an organization similar to TsAKB in its structure. This is about the Petrel Research Institute (in the territory of the former plant No. 92 named after IV Stalin).

In August, the 1959 team of CACB (about 5000 people, including 1500 highly qualified designers) joined the OKB-1. All the "gunners" immediately actively involved in the development of rocket and space technology, and many took leadership positions.

With the participation of the Grabinsky specialists, who already had relevant experience with solid-fuel anti-aircraft and anti-tank missiles, nuclear reactors, large subdivisions (about 300 people each) were formed to develop solid-propellant ballistic missiles and space nuclear power plants. In addition, groups of grabnitsy were formed that were supposed to be engaged in power units for the orbital ship of the Soviet lunar expedition, for the reusable manned “Buran” and later for underwater vehicles, electric vehicles, and other national economic facilities. Their department also found storage facilities without loss of cryogenic hydrogen and oxygen for refueling liquid rockets.

Boris Chertok, in his memoirs, “Missiles and People,” writes: “The combination of the royal OKB-1 and the Grabinsky Central Research Institute-58 allowed expanding the general scope of work on space issues. In particular, the programs received acceleration associated with the advent of the reconnaissance satellite and the first manned flights that previously seemed a distant prospect. The appearance of the first intercontinental solid-fuel rocket RT-2 (8K98) was one of the results of the historical association. The OKB-1 and the gunners of the TsNII-58 jointly created an intercontinental solid-fuel rocket, which was put into service and stood for 15 on combat duty for years. Therefore, the Order of Lenin, which was awarded to the TsAKKB in 1944, is now rightfully included in the list of awards of RSC Energia after SP Korolev.

Ctrl Enter
Noticed a mistake Highlight text and press. Ctrl + Enter
We are
Divisional gun ZIS-3: the biography of the record holder“Luka” and “Katyusha” against “Vanyusha”
19 comments
Ad