The very first US tank: a good car for PR!

October 30 2015
9
When Americans read about English tanks in the newspapers and saw their photos, their country has not yet been at war. But everyone was well aware that sooner or later, they would have to fight, that they would not be able to sit out overseas, and if so, then it was necessary to take care of real superiority over the enemy. Therefore, the US military was quick to start developing their own tanks. Moreover, they did not see any particular difficulties in this. After all, someone, and they certainly knew that the basis of all British, and French developments is the chassis of their own tractor "Holt". And if so, what is it that prevents them, the Americans, from repeating the experience of the British: take a tractor and put it in armor ?! This solution seemed so simple and obvious that no one really tried to come up with something else - both "Holt-gasoline-electric" and a number of other experimental ones were built on its basis or on the basis of similar machines. 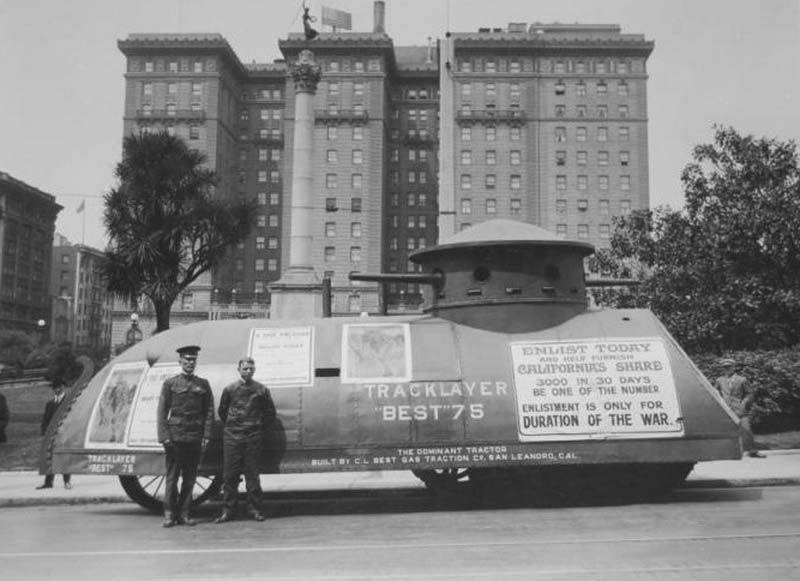 So CLBest also decided to try their luck in the field of creating a new look. weapons. In 1917, the company began developing its own tank, and on the basis of the tractor it produced ... Holt 75 rail spreader! This tractor was all the same well-known Holt 75 tractor model 1909 of the year, which this company produced under license. This model was popular, and not only among the railway workers, but also among the military, who noted the unpretentiousness of this car and its good maneuverability. The tractor itself was used in the American and British armies up to and including 1919, and during the Civil War in Russia it was supplied to the armies of the White Guards. The last samples of these cars, of course, are no longer military, but purely commercial ones, were written off only in 1945 year - that’s what they had great история! And one of the reasons for such a long service was a very important circumstance, which is also of importance for the military machine - it was simple in all respects! It had two leading tracks and a steering wheel in the front, driven by a conventional car steering wheel. Therefore, they didn’t think for a long time, they just hung their ordinary rail-laying tractor with sheets of ordinary iron (CLBest’s engineers simply didn’t have time for armor production), installed a gun in the forward part and two machine guns on the sides, and called it “tank”. 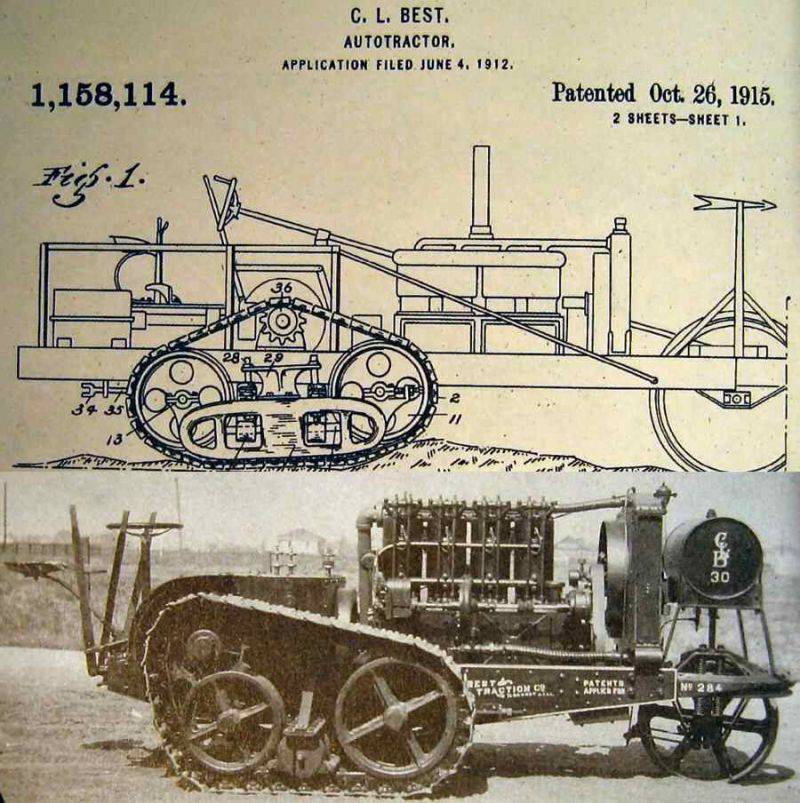 Then they offered “this” to the military, but they decisively abandoned it, rightly pointing out, first of all, the disgusting review that would make this car almost useless on the battlefield. However, an unfortunate result is also a result!

In order to get a profitable contract, the engineers decided to remake the project and soon they offered the US Army the second prototype of their tank under the designation Tracklayer Best 75 (also known as CLB 75). Now the car looked like a boat turned upside down with a keel, which, as the designers thought, would allow the tank to easily break the lines of wire obstacles. Unlike the British, they did not redo the chassis. That is, the steering wheel remained in front, and the tracks back, with armor covering them almost to the ground. The guns were installed in a cylindrical turret shifted to the stern, but the view from the tank remained almost as bad as it was. As a result, even the futuristic appearance of the Tracklayer did not save and the military did not take it on board. But ... nevertheless, the tank came in handy: they started using it for propaganda purposes, showed it at exhibitions, and even printing its photos - well, they say, what a miracle of technical thought we have in the USA! 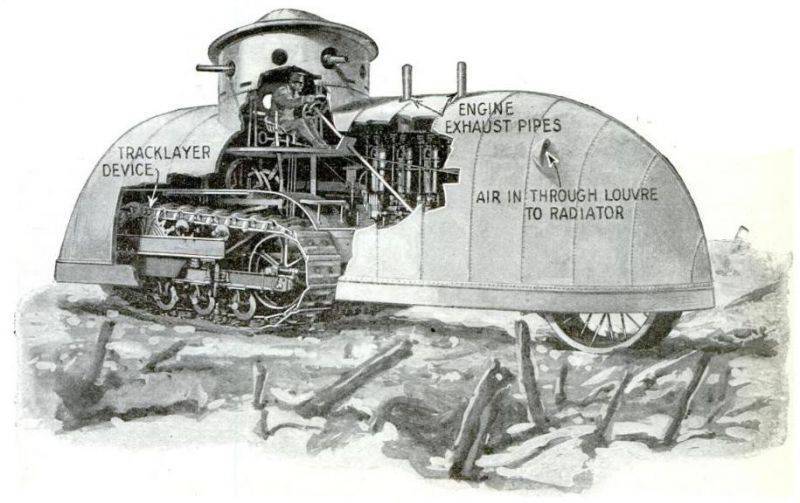 The tactical and technical characteristics of the tank were as follows: the combat mass of the order of 13-15 tons, the power of the gasoline engine with a working volume of 1440, see cubic., 75 hp. at 550 rpm Nevertheless, the speed was small, only 3-5 km / h, but the crew is a 5 person, the question then involuntarily arises, but where did they all fit in it? Armament was immediately two guns caliber 37 mm, and (possibly) machine guns 7,62 mm. In total, two cars were produced and for purely propaganda purposes this turned out to be more than enough! 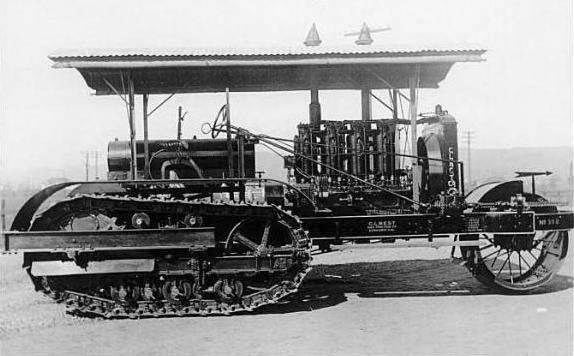 Perhaps the most remarkable in the design of this "tank" - his tower, most of all resembling the fighting machine of Martians from the novel of HG Wells "War of the Worlds". Probably, for the first and last time (not counting the Lebedenko tank!), Portholes similar to those of ships were installed on the combat land vehicle, and for some reason they looked in different directions ...

Because of the tractor layout, the control compartment had to be placed in the rear of the hull and there also had to be placed the tower, in which both the driver and the gunners were located. Even with six viewing portholes, the future tank’s view was disgusting anyway, because the view ahead was obstructed by the ship’s nose of his car. 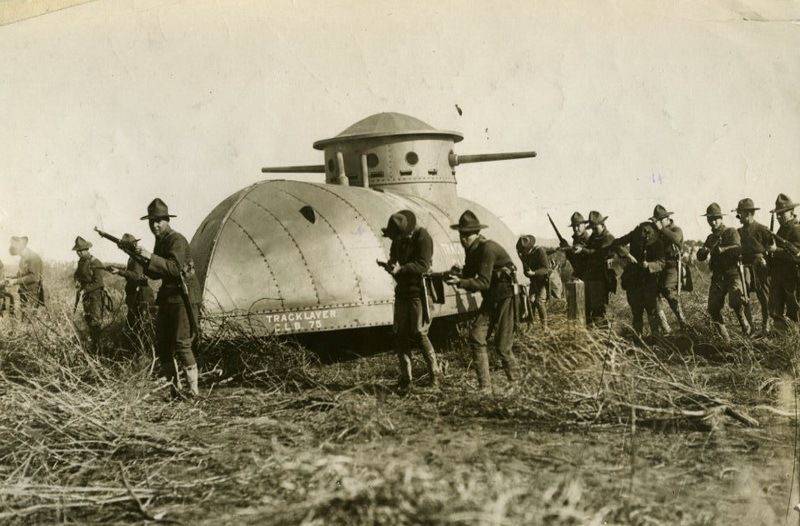 As for the device, technologically the entire tank could be divided into four large structural units:
- tracked undercarriage (three support rollers on each side, and two supporting wheels, the front wheel guide and rear drive);
- wheel part (steering, since there were no side clutches on the tracks);
- a rectangular chassis frame riveted from tee beams;
- power plant (located in the front of the tractor and on it, as a rule, the hood was not closed)
- governing bodies.

Since the engineers did not make any changes to the chassis, due to the specifics of the placement of the radiator, it was necessary to place two air inlets on the upper part of the hull. Management of the "tank" for the same reason also remained purely tractor - with the help of the steering wheel, mounted inside on a long bracket from the cab to the steering wheel. Interestingly, no attempt was made to “deploy” the hull and swap “front” and “rear”. It could somehow improve his review, but ... for some reason it didn’t come to his head. 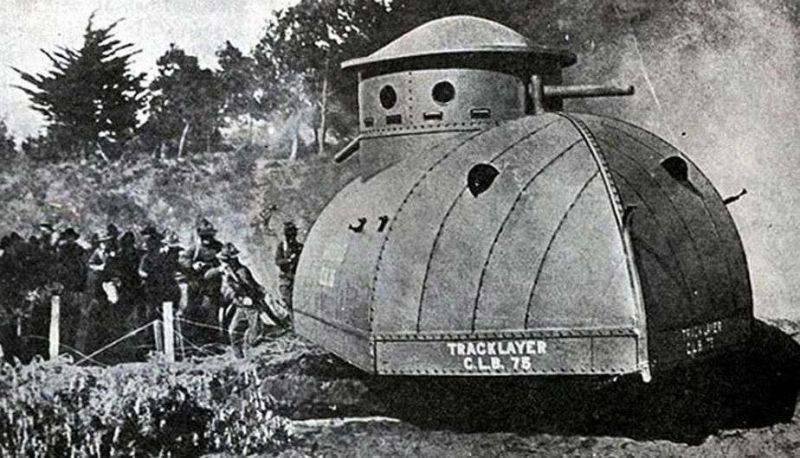 The first sample of the CLB 75 tank was riveted from regular iron and completed by the middle of the 1917 of the year. However, it immediately became clear that even a completely reliable chassis for a tractor on a battlefield was completely unsuitable for the tractor, and moreover, more successful tank models had already appeared in the USA. 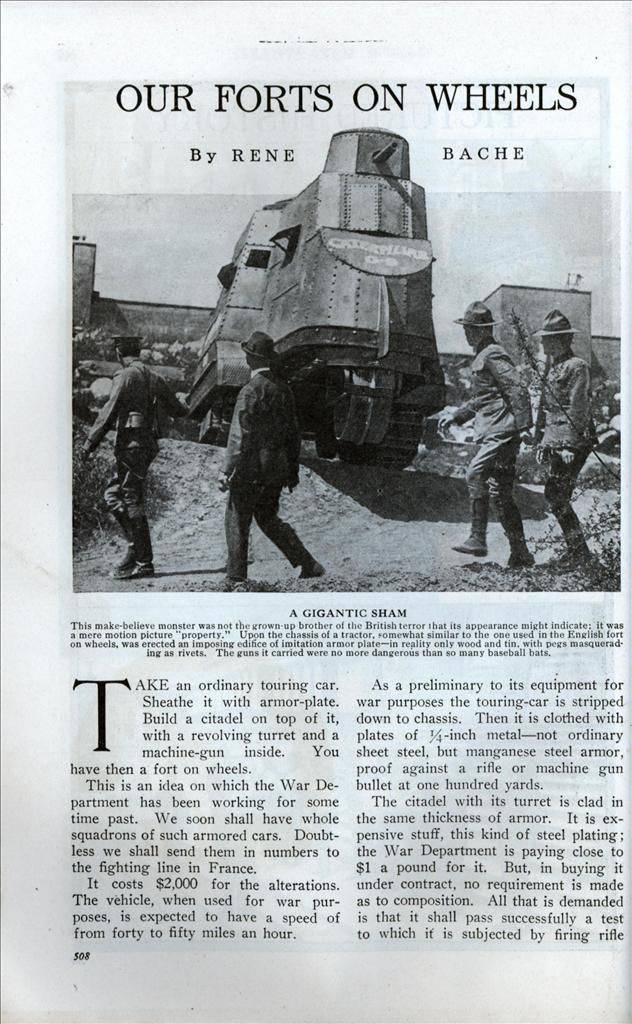 "Our forts on wheels" - an article from the magazine "Modern Mechanics"

And yet, since the prototype was available, it was used in the department ... the propaganda of the American army, where there were very reasonable guys who began to photograph it in various forms and write about it "downhole" articles in various magazines. For example, the magazine "Modern Mechanics" wrote that America has armored cars with armor worth 1 dollar per pound of manganese armored steel, reliably protecting their crews from bullets! In one case, these are trucks that are covered with quarter-inch plates of armor, in the other case this is a “fort” with a tower that can move at a speed of 25 miles per hour! The prices for these “cars” - 5 and 8 thousand dollars were also indicated, the latter having two towers with machine guns. That is, it was clearly talking about wheeled armored cars, but the photo depicted the first version of Tracklayer Best 75! 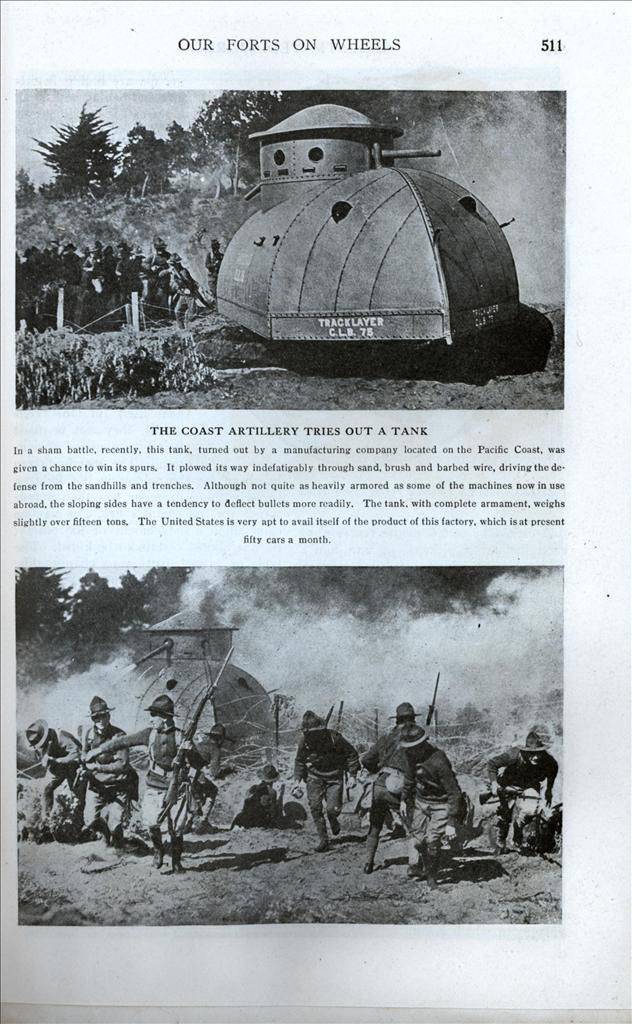 "Our forts on wheels" - an article from the magazine "Modern Mechanics" (continued).

Then the "tank" was involved during the maneuvers of the California National Guard, which were held in the same 1917 year near San Francisco, and even a picture booklet depicting the CLB 75 as a real combat vehicle was published. Well, and then, most likely, the car was dismantled for metal, and the chassis, as a “species-looking”, was sold to some farmer on the cheap.

It is surprising, however, that the Americans, having acquired such a “futuristic tank”, spared money for ... making them ... a lot! Well, let's say 12 or 20 pieces. And from the cheapest metal, that is, for the lowest price. But having driven them through the streets of San Francisco or New York, one could get an incomparably greater PR effect than the one they got from one car. Well, for the German General Staff it would be a great misinformation! 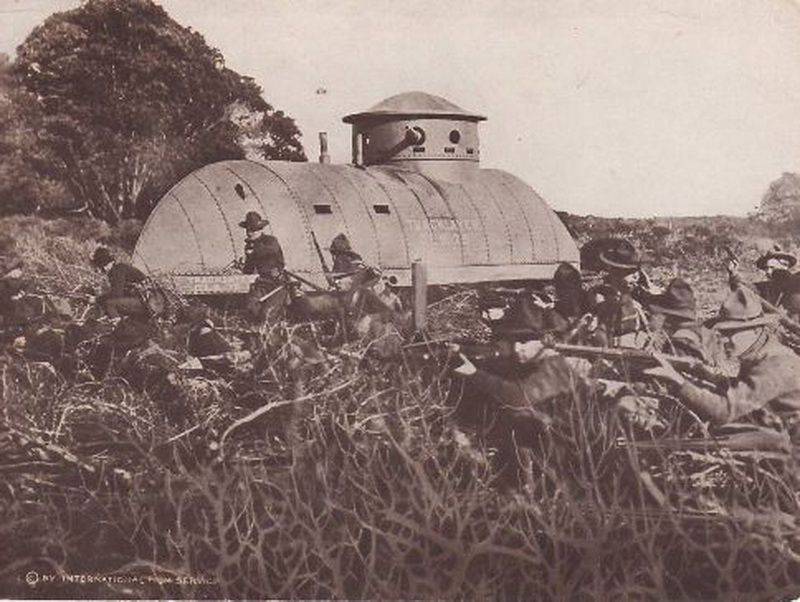 Ctrl Enter
Noticed oshЫbku Highlight text and press. Ctrl + Enter
We are
Once again about tanks, Soviet and GermanIs the "old" well forgotten to become the "new"? Part-2. At the call of honor and duty
Military Reviewin Yandex News
Military Reviewin Google News
9 comments
Information
Dear reader, to leave comments on the publication, you must sign in.