October 28 2015
23
The start of the Russian operation in Syria was a surprise for many specialists and the general public. Naturally, strikes against terrorist objects immediately became the subject of numerous disputes, which continue to this day and are unlikely to end in the near future. Over the past month, experts and the press have expressed various opinions about the course of the Russian operation, from neutral to radical. To date, the situation has begun to change. Even foreign experts are forced to recognize the effectiveness of Russian air strikes.


On October 23, the American edition of Business Insider published an article The Russian military has been effective in Syria (“The Russian army shows high efficiency in Syria”), which discusses the main aspects of the actions of the Russian aerospace forces and the naval fleet. The author of this publication is Commander Garrett I. Campbell, a U.S. Navy pilot and national security specialist at the Brookinsky Institute. The opinion of such a specialist, well versed in matters of air operations, is of particular interest.

At the beginning of his article, Campbell recalls that shortly after the appearance of the first information about Russian aircraft in Latakia, experts and experts began to speculate about Moscow’s strategy and plans for action in Syria. Different opinions were expressed and a part of them, in the opinion of the author, was erroneous. 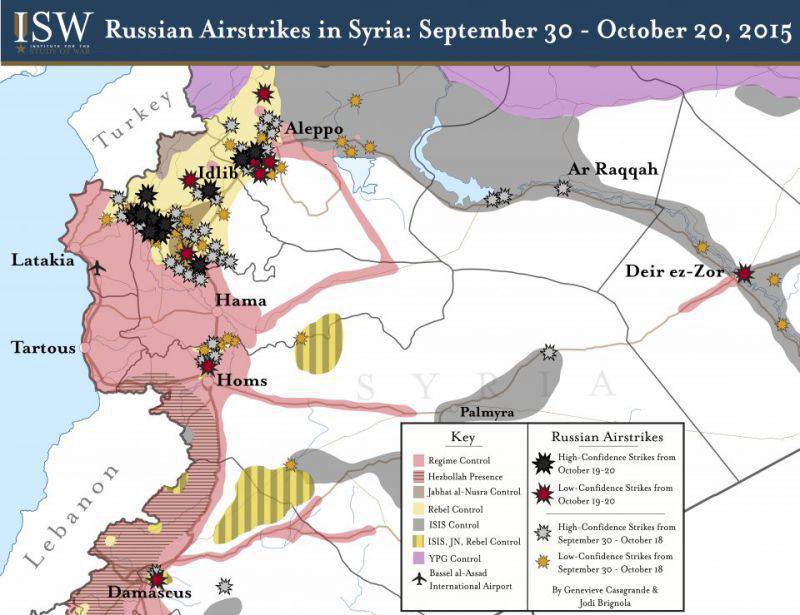 Many foreign analysts expressed the idea of ​​Russia's weakness militarily. The reason for such statements were various aspects of the air force and naval components of the operation. However, it later became clear that such an assessment of the Russian military potential did not correspond to reality. Over the past few weeks, Russia has demonstrated that it has the necessary capabilities and capabilities, and is also ready to use them to achieve its political goals.

Russian combat aircraft perform a large number of sorties and strikes against enemy ground targets with notable successes. At the present time, according to G. Campbell's estimates, from 48 to 96 departures are carried out per day. This is an impressive number, and to describe it, the author recalls a recent publication in the New York Times. Its authors noted that Russian aircraft perform the same number of combat missions per day as their colleagues from a coalition led by the United States for a month of work.

The author of Business Insider recalls that under the blow of the Russian aviation not only the divisions of the Islamic State terrorist organization fall (its activities are banned in Russia, and the fight against it is officially declared the goal of the current operation), but also other participants in the current Syrian conflict. In particular, American experts have information about the destruction of several commanders of the so-called. moderate opposition. So, on October 19, Basil Samo was killed, one of the former officers of the Syrian army, who sided with the rebels. It is also known about the death of one of the commanders of the formation of "Nur al-Din al-Zinki."

G. Campbell, analyzing the success of Russian aviation, asks an important question: can the Russian Aerospace Force be able to maintain the existing intensity of sorties and combat work? The answer to this question is rather positive. The former pilot is forced to admit that almost none of the NATO countries can achieve successes comparable to Russian ones. The current situation is an unpleasant lesson for the Alliance, especially against the background of campaigns in Kosovo or Libya.

The author also touched on the subject of the Russian Navy, which also took part in the fight against terrorists. Campbell recalls that the state of the Russian Navy had previously received negative evaluations: the fleet was “more rusty than ready to work” (more rust than ready). Nevertheless, the Russian command did everything possible to restore it. The existing ships are being modernized, and the construction of new ones is continuing. The participation of the fleet in the Syrian operation showed its renewed potential. Previously, no one knew that Russian warships could use cruise missiles against ground targets at a distance of about 900 miles.

In the context of the recent successes of the Russian fleet, the author proposes to consider the current programs of the US Navy, in particular the ambitious project Littoral Combat Ship. Mr. Campbell recalls that the first ships of this project, USS Freedom and USS Independence are noticeably larger than ships of the Caspian Flotilla (their displacement is 2900 and 3100, respectively), but are not equipped with cruise missiles or similar attack systems.

Given the capabilities of American and Russian small ships, launching rockets from the Caspian Sea was a real revelation. Moscow, having launched rockets, sent a message to the West, which can be interpreted in various ways. In particular, one of the commentators, to which the author refers, called the Caspian Flotilla a player capable of changing the rules of the game. Small, inexpensive and easy-to-manufacture rocket ships give the Russian fleet new unique capabilities. In addition, they are a demonstration of success in modernizing the Navy, many of which were not previously known to foreign specialists.

Specialists from foreign countries express doubts that the Russian Navy, in particular the Black Sea Fleet, will be able to participate in military operations for a long time. However, such an opinion, according to G. Campbell, may be erroneous. Over the past three years, Russian ships and warships regularly come to the ports of Latakia and Tartus, supplying the Syrian army with weapons and equipment.

During the operation of this route, the volume of traffic is not reduced. Moreover, in connection with the beginning of the military air operation, it can be expected that the quantitative indicators of supplies to Syria will only grow. According to some data, the author notes, the Russian fleet has already begun to increase traffic volumes.

According to Garrett I. Campbell, the Black Sea Fleet is of great importance for Russia and the Syrian authorities. For example, the flagship of the fleet, the missile cruiser "Moscow", not only accompanies the transport ships with cargoes for the Syrian army, but also performs the tasks of air and missile defense in the eastern regions of the Mediterranean.

Opinions affecting the age of Russian ships are expressed. Some experts criticize them, arguing the claims of older technology and the obsolescence of a number of technologies. Campbell admits that in comparison with some representatives of the NATO fleets, Russian ships really look like “old men”. At the same time, he recalls that even old ships are able to effectively accomplish the tasks assigned. In addition, participation in the operations of ships of the Navy speaks of the reviving potential of the Russian armed forces, as well as the desire of Moscow to solve various foreign policy tasks using the army and navy. As a result, Russian ships turn out to be a noticeable threat, which NATO fleet leaders must take into account.

Russia in recent years has been engaged in the restoration of its navy. This program fully fits into the context of the stated and demonstrated tasks of Russian foreign policy. Mr. Campbell believes that those times when it was safe to talk about the imminent collapse and disappearance of the Russian Navy have already passed. Now, analysts should be more cautious in their estimates and not pouring predictions and predictions that are in no way connected with reality.

Do not doubt the Russian potential

The last section of the article by G. Campbell got a catchy headline: Don't doubt Russia's capabilities. After this thesis some final thoughts of the author follow. He considers it important to recall that some assessments of the capabilities of the Russian armed forces may be inaccurate. At the same time, the accuracy of such assessments is not just a matter of facts. Much more of the author is concerned with the risks associated with incorrect assessments of Russia's actions in Syria.

Western analysts, as well as state leaders, often seek to discredit Russia with the help of incorrect assessments of its capabilities. Naturally, Moscow will pay attention to these cases and prove the wrongness of their opponents.

In connection with the latest events in the international arena, a balanced assessment of the situation, as well as the actions and capabilities of other states, has become very rare. Many experts and politicians are trying to use the existing situation for some personal gain, and therefore prefers to make biased and biased assessments. It is quite understandable that all this does not benefit international relations.

Garrett I. Campbell actually refuses this wrong practice and proceeds to an objective assessment of the current situation. When considering the Russian operation in Syria from neutral positions, it is possible to note the high effectiveness of combat missions. In addition, we should not forget about the navy. Several ships of the Caspian flotilla performed only one massive missile strike, which could affect the position of the countries of the region and change the situation.

It should be noted that the article The Russian military has been effective in Syria of the Business Insider publication is an excellent example of the correct approach to military-political analytics. Its author, not forgetting the position of Washington and the interests of his country, is right in his assessment of the situation and the actions of the Russian armed forces. If in the foreign press such an approach was used more often, and journalists and analysts would strive for the greatest possible objectivity, then the situation in the international arena would be simpler and not causing concern.


Article The Russian military has been effective in Syria:
http://businessinsider.com/the-russian-military-has-been-alarmingly-effective-in-syria-2015-10

Ctrl Enter
Noticed oshЫbku Highlight text and press. Ctrl + Enter
We are
Business Insider: Russian fighter T-50 can not compete with the American F-35Results of the week. "Well, do not change me because of every idiot!"
Military Reviewin Yandex News
Military Reviewin Google News
23 comments
Information
Dear reader, to leave comments on the publication, you must to register.