October 27 2015
7
The Caproni Ca.60 Noviplano transport flying boat for its time was an amazing airplane. In fact, this project was a crossing of a house on the water with an airplane, setting the "bar of oddity" for aircraft at a completely new level. This flying boat with a length of more than 23 meters and a weight of more than 26 tons was to be the first in stories aviation transatlantic liner.


This flying boat was experimental, based on this project in the future, the Italian aircraft designer Giovanni Battista Caproni expected to create an 150-seat aircraft. Caproni Ca.60 Noviplano differed very unusual aerodynamic configuration. The plane had nine wings, which were located in three packets according to the triplane scheme; the plane could be called a triple triplane (three wings in the front, three in the middle and three in the tail). No one else built anything like this before or after. Looking at this unusual aircraft, the thought comes to mind that the Italian designers were guided by the theory that with the help of a sufficient number of wings it would be possible to lift anything to the sky.

The firm "Caproni" was originally famous for its giant-size bomber bombers, which it built during the First World War. The scale of the Ca.60 amphibious aircraft could best be described in Italian with the word “capronisimo”. Indeed, for the 1921 of the year, it was a huge aircraft with eight engines that developed more than 3000 horsepower. The wings for this aircraft were borrowed from triplane bombers, which remained after the end of the war. On the sides of the fuselage of this liner was mounted a pair of outrigger floats (remote elements). 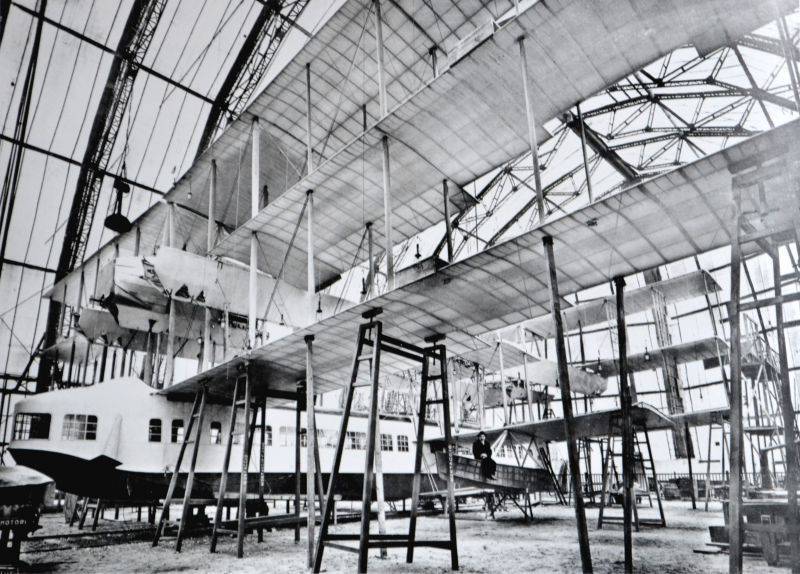 Talking about this plane, one can not forget its designer Giovanni Battista Caproni, who was better known as Gianni Caproni. He became an aircraft designer during the First World War, while his company was able to achieve significant success, especially in the construction of multi-engine bombers. At the same time, the end of the war in 1918 led to a sharp decline in orders for military aircraft. For this reason, the aircraft designer decided to find a way out of the situation in the design of civil aircraft.

Back in 1913, a young aircraft designer, who was then just 27 years old, told Gazzetta dello Sport in an interview that planes would soon be able to accommodate hundreds of passengers and travel transoceanic distances in just a few hours. After the end of the First World War, Caproni was actually one of the first aircraft designers to begin designing an ambitious and huge transport and passenger seaplane, a patent for which he received February 6 1919 of the year. The design of a multi-engined seaplane, which had a capacity of about 100 man, was very extravagant for those years. If the project were implemented, it would allow passengers to reach hard-to-reach or remote areas faster than through existing sea or land routes and at a significantly lower price. Caproni believed that the future would belong to aircraft that would be able to fly long-haul flights.

Giving an account of the problems that are associated with flight safety, Gianni Caproni focused his efforts on the possibilities of improving the reliability of the aircraft and minimizing damage from possible accidents. First, he decided to place so many engines on his seaplane in order to allow the car to remain in the air even in the event of a failure of up to three engines simultaneously. Secondly, the configuration of its hydroplane provided the relative ease of taking off and landing (the airfield for this flying boat could be a lake of even quite modest size). Thirdly, the designer acknowledged the importance of increasing the level of comfort for air passengers by increasing the cruising altitude and turbocharging systems, which will compensate for the loss of engine power of the aircraft during takeoff. 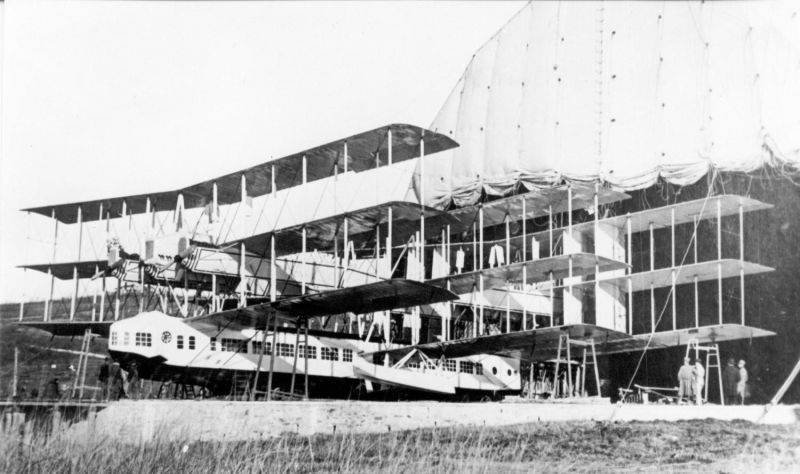 The Flying Floating House, designated Caproni Ca.60 Noviplano, was equipped with three sets of triplane wings. These wings were mounted above the one-hundredth body of the aircraft, which really looked like a real floating house than any other aircraft. The total area of ​​all nine wings of a giant flying boat reached 837 square meters. Only one aircraft in the history of aviation had a larger wing area - it was the flying boat "Hughes H-4", which was built in the USA in the 1947 year. The central wings of each of the triplane sets were connected to each other by two parallel box-shaped structures that resembled fuselages.

In each of these structures (front and rear), American Liberty engines were installed, which developed the power of 400 l. with. Additional power units, which consisted of one pulling and one pushing engines, were located between the fuselages in the front and rear triplane sets of wings. In total, the seaplane received eight engines. On all nine wings of the flying boat there were ailerons, while the rear ailerons also performed the functions of elevators. The rudders and vertical keels were mounted on the outside of the aircraft fuselage between all rear wings.

The construction of a unique seaplane began in the second half of 1919. Just a year later, a huge hangar appeared on the shores of Lake Maggiore, in which the final assembly of the aircraft was carried out. The American ambassador Robert Underwood Johnson visited the construction site of the giant seaplane, who expressed his admiration for what he saw. It was planned to begin flight tests in January 1921, while Caproni said that if Ca.60 can successfully pass the test stage, it will become the flagship of Italian maritime civil aviation. 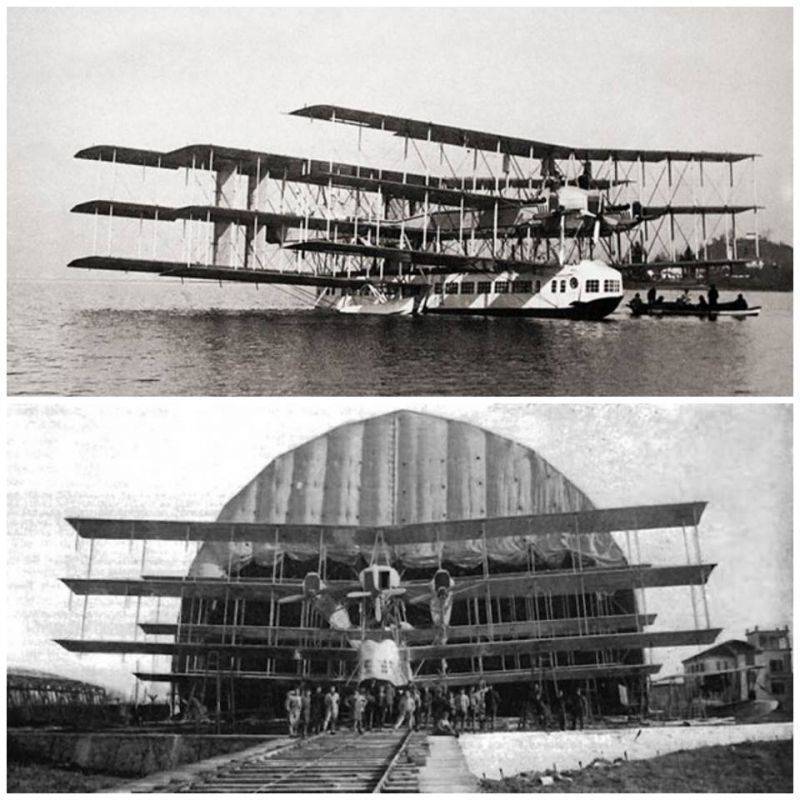 For the first time the plane was taken out of the hangar on Lake Maggiore 20 in January 1921, on the same day it became a tasty object for photographers of all stripes. The next day, according to the plans, the plane was supposed to splash down for the first time, but due to the low water level and some difficulties with the ramp that connected the hangar with the lake, the flying boat could not be lowered into the water. Moreover, when making the first attempt, the first lower wing of the seaplane was broken. As a result, the workers worked on troubleshooting all night, everything was repaired, but (to the dismay of Caproni) the next time they tried to lower the seaplane, the starter turned out to be faulty. As a result, the plane could only maneuver on the water surface only 9 February 1921.

In this case, the aircraft was able to perform only a few maneuvers, the tests had to be interrupted due to the deterioration of weather conditions, but the test results were still recognized as positive. The seaplane was easy to manage, was quite maneuverable and well managed. After completing this test phase, Caproni noted: “If I knew what difficulties I would have to face, I wouldn’t have the courage to start everything.” 12 February 1921, the aircraft for the first time managed to reach speed in 130 km / h and for the first time flew into the sky. After the flight, the crew noted that the car responds quite well to the commands.

The second flight of the plane made 4 March 1921 of the year. The seaplane was able to accelerate to 180 km / h, but during takeoff, the pilot very strongly pulled the steering wheel towards him, as a result, the plane broke away from the water with a significant lurch on the tail and at that moment the engine power was not enough. As a result, the tail of a flying boat touched the surface of the water, and a second later a giant plane crashed into the water, breaking in half. At the same time, the nose and the front part fell under water, while the tail kept the remnants of the seaplane afloat. Caproni personally watched the wreck of his creation from the shore. Later, he noted that the fruit of his many years of work, which was to become the basis for the future civil aviation, was lost in an instant.
The causes of the Caproni Ca.60 Noviplano accident were two: the error of the pilot Frederico Semprini, who was pulling the wheel too hard for himself, trying to gain altitude without adequate speed along with the movement of sandbags, which were located there as a ballast and simulated the presence of passengers on board. These bags were not tied to the seats and, when attempting to take-off, they simply rolled into the tail of the flying boat, significantly shifting the center of gravity to the back of the car. 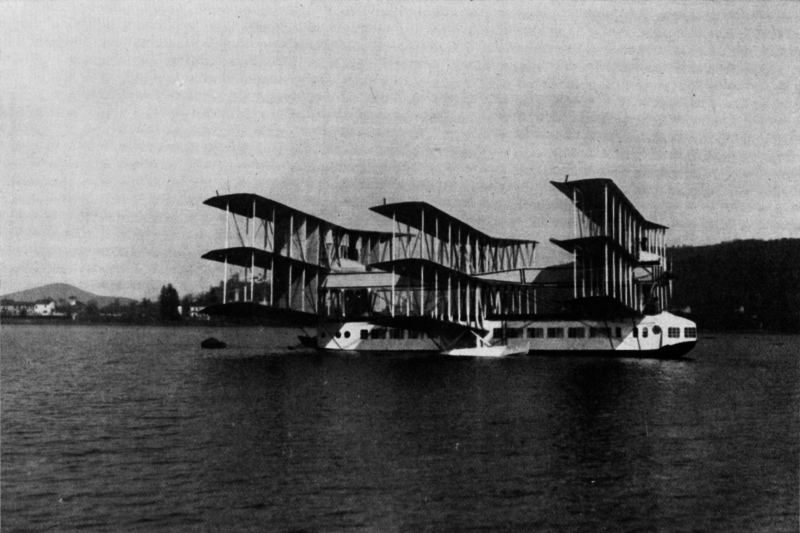 Even at first glance, the seaplane received significant damage. Despite this, the car was towed to the shore the very next day. At the same time, the cockpit that stayed under the 17 watch’s water could not be restored, and only a week later it was decided to disassemble the aircraft and start building a new one. Unfortunately, in the summer of the same year, the Minister of the Interior was replaced in Italy, who was Ivano Bonomi. He “had a grudge” at Caproni and got the government to stop funding the project. Thus, the story of the world's only aircraft with 9 wings came to an end. According to another version, the aircraft was not dismantled, but burned down some time after the accident under very mysterious circumstances. To the present day, only the lower part of the nose and one engine have survived from the aircraft, which today are exhibited to the public in the Gianni Caproni Museum of Aeronautics, located in the city of Trento. 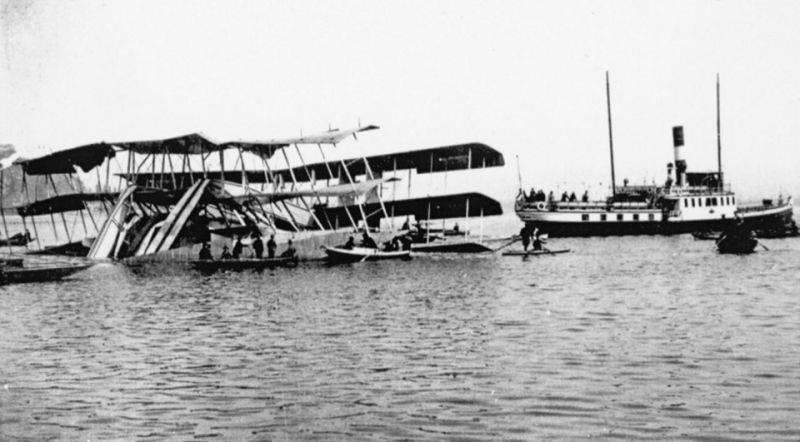 Ctrl Enter
Noticed a mistake Highlight text and press. Ctrl + Enter
We are
Stipa-Caproni: one of the most unusual aircraftAn-12 in Afghanistan
7 comments
Ad