F-35 was too expensive even for the USA.

October 25 2015
39
The program for the production of the newest American fighter F-35, calculated for purchasing thousands of units, is experiencing increasing problems. Not only Canada begins to refuse the car, even in the US Senate they say that the American budget will not pull so many of these fighters. And all this - against the backdrop of reports of large-scale technical difficulties of the latest development of the American military-industrial complex. 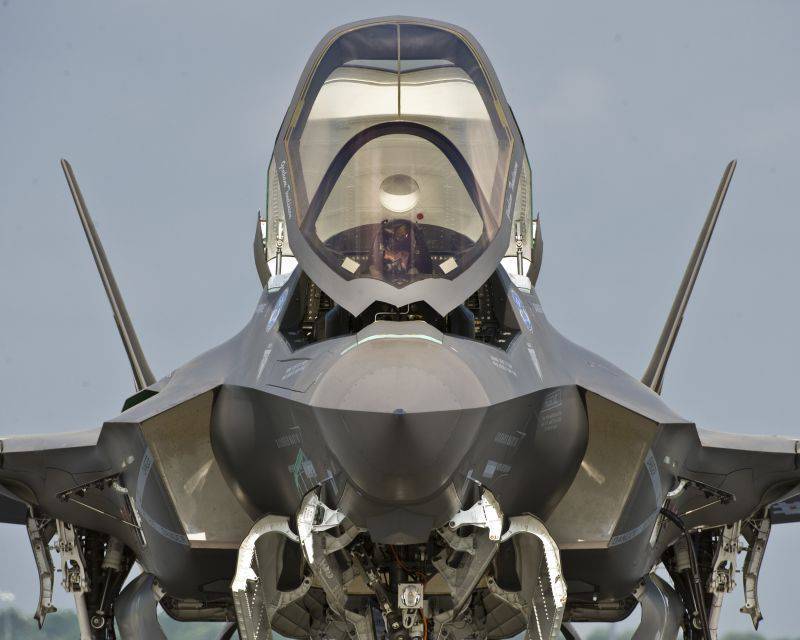 According to him, the Pentagon’s decision to purchase 2443 F-35 aircraft for the Air Force, the Marines and the Naval fleet The United States does not fit well with a planned budget. He noted that an increase in program costs would mean the acquisition of fewer aircraft. “We're going to cut purchases,” McCain said, stressing that there shouldn’t be as many planes as the Pentagon planned.
According to Defense News, McCain has long criticized the program for the acquisition of F-35 for the high cost and disruption of production.

Problems with the procurement of this fighter appeared in other countries. Canadian Liberal Party leader Justin Trudeau, who won the October 19 parliamentary elections, has already announced that the country will abandon the F-35 program - and now has confirmed this intention.

Trudeau’s decision, which also notified the United States that the Canadian air force was no longer participating in the international operation in Iraq and Syria, caused undisguised irritation in Washington. Republican senator Orrin Hatch said that Canadians “hurt themselves because it’s the best fighter in the world. history».

And Lieutenant-General of the US Air Force Chris Bogdan calculated that Canada’s exit from the fifth-generation F-35 fighter-bomber program is estimated at tens of billions of dollars. Bogdan heads the project to develop this aircraft in the Pentagon, reports TASS. If Canada or any of the nine countries participating in this program abandons its obligations, then the cost of each F-35 "will increase by a million dollars," said the representative of the US Department of Defense, answering questions from lawmakers. Bogdan also recalled that Canada planned to take on approximately 2% of the total costs of this project.

“Aircraft will not be abandoned”

As the test pilot, the hero of Russia Igor Malikov, told the newspaper VIEW, the US concern is understandable.

“When they started doing this project, the developers already understood that these would be very expensive airplanes. Therefore, they have made an extensive program with different countries according to the principle that not only the United States, but also other participants pour money into it or participate in production. And all this was done, including with the aim of subsequently “luring” all these countries for the purchase of these expensive planes. Thus, I think that these aircraft will not be abandoned, too much has been invested in them, but the number of purchases may decrease somewhat, ”he explained.

F-22, according to the expert, costs about 100 million dollars, F-35 - a little less. “To replace these new cars, the Americans still have nothing. They have to replace with something the current F-16, which are already going to end of operation, ”he said.

Malikov noted that F-35 is on “one line with the PAK FA being developed in Russia”, they are close in technical capabilities and basic parameters. At the same time, the Russian car is cheaper than the American one. “The main thing there is not the body or even the engine. This is all easier. But the onboard equipment, the artificial intelligence that will help the pilot to find and hit the target, to get out of difficult situations - this is the main thing. And at the expense of on-board equipment, aircraft can bypass competitors, ”he added.

Commenting on the “minuses” of the F-35, for example, reports of uncomfortable helmets for pilots of these aircraft that could allegedly break pilots' necks, Malikov said that “the more you cram a plane and an electronics cabin, the greater its weight will be , and with the ejection in this case it is quite realistic to break the neck. "

In turn, the chief editor of Vzlyot magazine, Andrei Fomin, told the VIEW newspaper that the F-35 was immediately conceived as a mass fighter of the next, fifth, generation, which should gradually replace the most popular American F-16 aircraft. In this case, the rate was made on the plane not for the US Air Force, or rather, not only for them, but also for a wide range of partners and allies. Due to this “mass character”, the developers wanted to make the car cheaper.
Commenting on the exit from the Canada project and other difficulties in its implementation, Andrei Fomin noted that “this is all a question of trade and economic relations”. “Arms trade, especially so expensive and advanced, is always a process that is not painless. This is big money. Someone signs a contract, and then realizes that there is no money in the budget. But I do not think that the exit of Canada or someone else is able to significantly affect the situation as a whole. Because the total supply is huge. At the beginning of this year, confirmed orders were for 3170 aircraft, ”he concluded.

The problems of the newest fighter

F-35 is designed using stealth technology and is capable of carrying nuclear weapon. The Lockheed-Martin company and several other leading Pentagon contractors worked on it. Along with the USA, eight more countries are taking part in the project - Australia, Great Britain, Denmark, Italy, Canada, the Netherlands, Norway and Turkey.

F-35 will be available in three versions. F-35A - this is the most common configuration, created for the US Air Force and customers abroad. F-35B is created for the US Marine Corps with a short take-off and a vertical landing - the most complex model. F-35C is done for deck aviation The US Navy will be based on aircraft carriers.

A serious blow to the reputation of the new fighter caused a disaster that occurred in June 2014 year: due to engine failure model F-35A collapsed in the state of Florida. In January 2015, it was reported that the creators of the F-35 faced another technical problem and moved the launch of the aircraft from 2015 to 2019 year.

In June, 2015, the media published a test pilot report, which outlined the fundamental problems of the fifth-generation American fighter F-35. In particular, according to him, the expensive new aircraft cannot turn around or rise quickly enough to hit an enemy plane during a maneuverable aerial battle or evade enemy shooting.

A number of experts have identified deficiencies in the F-35, due to which the plane, in their opinion, is more in tune with the fourth-generation fighter with a plus sign. In addition, according to the deputy chairman of the Russian government, Dmitry Rogozin, the F-35 is inferior to the fifth-generation Russian fighter, the PAK FA.

In mid-October, it was reported that helmets in the newest US F-35 fighters could threaten pilots with neck injuries. And later it became known that almost every third pilot of the American F-35 advanced fighter will face an increased risk of getting a lethal neck injury (whiplash) during the ejection.

As a result, the US Air Force had to issue instructions for pilots, which prescribes how to respond to the criticism of the aircraft.

We are in Yandex Zen
An-12 in Afghanistan
Russia in the world market of new multifunctional fighters
39 comments
Information
Dear reader, to leave comments on the publication, you must to register.