The project of the aircraft Bell Rocket Chair

October 29 2015
6
The Bell Rocket Belt jetpack project was generally successful. Despite the short duration of the flight, due to the insufficient volume of fuel tanks, this device confidently took off the ground and was able to fly freely, maneuvering with the help of a moving engine. The refusal of the military department to further develop the project did not lead to a complete halt to work on a promising area. In 1964, Bell Aerosystems, led by Wendell Moore, Harold Graham and other participants in the previous project, proposed another version of an individual aircraft with a jet engine running on hydrogen peroxide.


The main objective of the new project was to increase the duration of the flight. The used jet engine working on hydrogen peroxide allowed to increase this parameter only by increasing the volume of the fuel tanks, which could entail an increase in the weight of the whole structure and, as a result, the impossibility of preserving the existing form factor of the knapsack. However, the engineers found a simple and elegant way out of this situation. The solution to the problem was to be a chair that was proposed to be used instead of a frame and a corset with a belt system. For this reason, the new project received a simple and clear name Bell Rocket Chair (“Rocket chair” or “Rocket chair”). 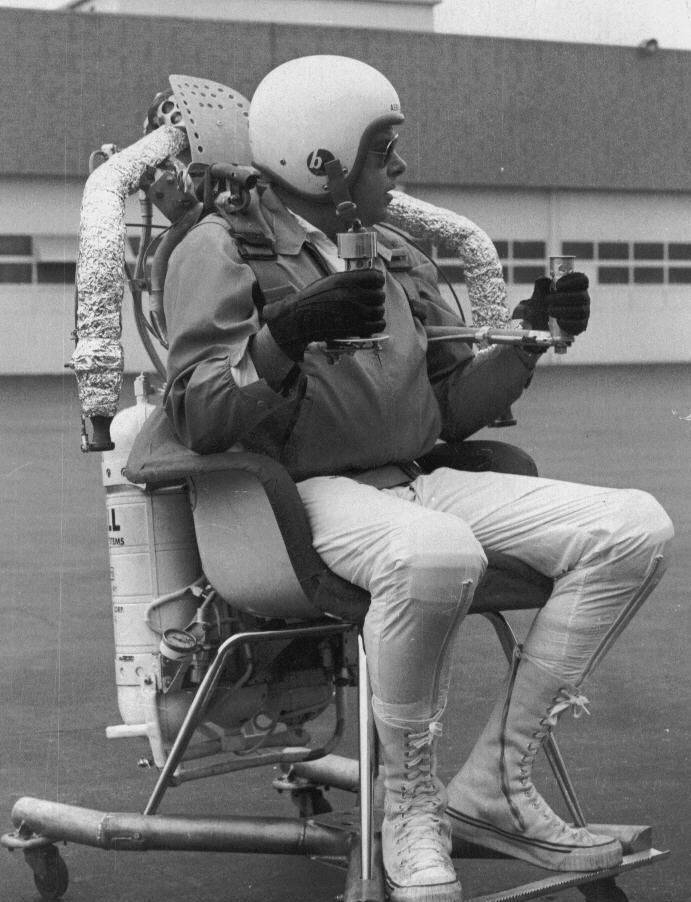 Robert Coater and the "Rocket Chair" on trial

The main element of the new aircraft was the usual office chair of acceptable size and weight, purchased by experts in the nearest thrift shop. The chair was fixed on a small frame with wheels, which made it possible to transport this device, and also to some extent facilitated take-off and landing. On the seat provided for attachment for the pilot's seat belts. In addition, a small frame was attached to the back with nodes for the installation of elements of the fuel system and the engine.

It should be noted that the development and assembly of the “Rocket chair” did not take much time. This device was a direct development of the previous “Rocket Belt” and a number of existing units were used in its design. Type of engine, the principle of its work, etc. have not changed. Thus, the new aircraft was in fact a deep modernization of the existing one, implemented using the seat and some other components.

On the back of the chair fixed a small frame with mounts for several cylinders of fuel and compressed gas. In addition, a small shield was provided in the upper part of the frame, which protected the pilot's head from shock and high engine temperature. As before, the cylinders were arranged vertically in one row. Nitrogen was stored in the central section under pressure for the fuel injection system, and hydrogen peroxide in the lateral ones. The total fuel capacity has been increased from 5 to 7 gallons (26,5 L). This allowed us to talk about a certain increase in flight time. 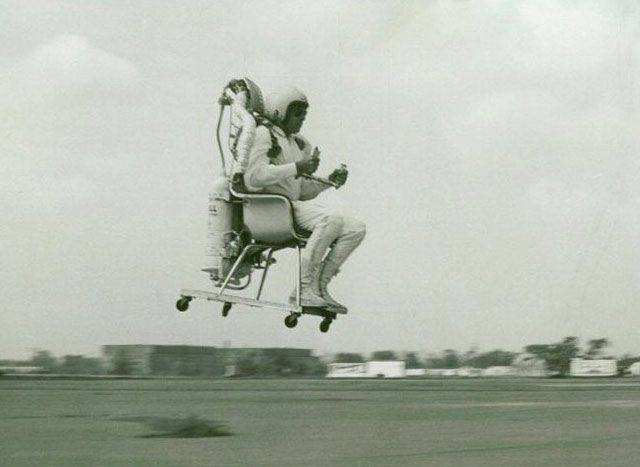 The design of the engine remained the same, although some changes were made to improve the performance. The main element of such an engine was a gas generator, made in the form of a metal cylinder with several inlets and outlets of pipelines. Inside the cylinder was a catalyst in the form of silver plates coated with samarium nitrate. Two curved pipes with nozzles at the ends emerged from the catalyst sideways. Pipes were equipped with thermal insulation. The engine of the product Rocket Chair was a modernized version of the power plant of the previous aircraft with increased propulsion.

Also, the control system contains two remote controls mounted on the ends of the main levers. On the left there was a swinging knob for fine control of nozzles, on the right there was a rotating knob for controlling the nozzle. There was also a timer that warned the pilot about flight time and fuel consumption. The timer was connected to the buzzer in the pilot's helmet and had to give a continuous signal for the last few seconds of the estimated flight time, warning of the end of fuel. 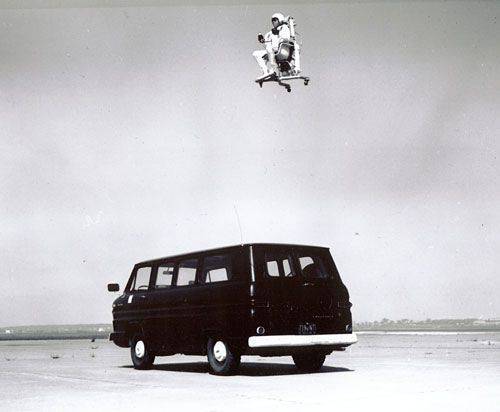 Demonstration flight around an obstacle, 2 September 1965

The pilot’s equipment, as before, consisted of a helmet with hearing protection and a buzzer, glasses, heat-resistant overalls and appropriate footwear. Such equipment protected the pilot from noise, dust and hot jet gases, the temperature of which could reach 740 °. Due to the characteristic mutual position of the pilot and the engine nozzles, it was possible to abandon the special protective boots. On the set of surviving photos, the pilots of the “Chair” are shod in ordinary sneakers.

The principle of operation of the used engine was relatively simple. The compressed nitrogen from the central tank was fed into the tanks with hydrogen peroxide and forced it out. Under pressure, the liquid entered the gas generator, where it fell on the catalyst and decomposed, forming a vapor-gas mixture of high temperature. The resulting substance had a high temperature and a large volume. The mixture was brought out through Laval nozzles, forming jet thrust. By changing the amount of hydrogen peroxide entering the gas generator, it was possible to change the engine thrust. The flight direction was changed by tilting the engine and changing the direction of its thrust vector.

Due to some modifications of the engine has been increased to 500 pounds (about 225 kgf). Such traction made it possible to compensate for the increase in weight of the entire structure, associated with the use of a chair and larger tanks. In addition, an increase in the capacity of the fuel tanks should have led to an increase in the maximum possible flight duration. According to calculations, the “Rocket chair” could remain in the air for up to 25-30 seconds. For comparison, the original Bell Rocket Belt could fly no longer 20-21 with. 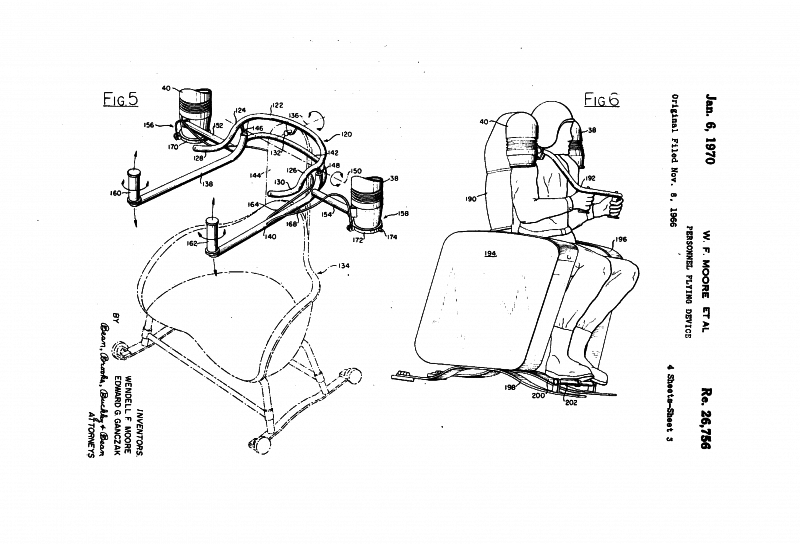 General scheme of the product Bell Rocket Chair from the patent

The design work was completed by the beginning of 1965. At the very beginning of the year, an experimental copy of the device was made, the basis for which, as already mentioned, was the chair from the nearest store. The use of existing products and other design features greatly simplified the prototype assembly. Its construction was completed in February 65.

February 19 aircraft Bell Rocket Chair first flew in one of the hangars of the company Bell. For pilot safety, the first test flights were carried out on a leash. With the help of safety cords, the apparatus was not allowed to fall too fast to the ground, and the pilot should not have risen to great heights. Tying in a hangar allowed us to specify the optimal balancing of the product and make some other changes to its design. In addition, during the preliminary tests, pilots were able to master the technique of piloting the new device. A series of flights inside the hangar continued until the end of June. 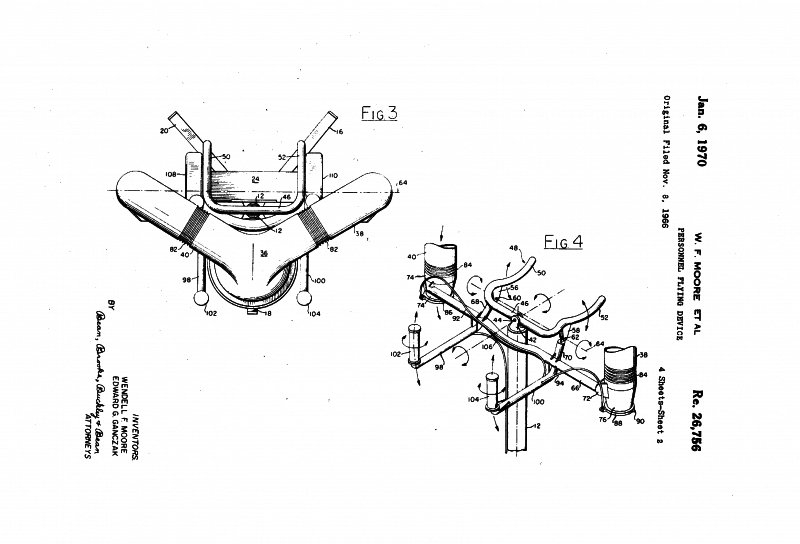 Several pilots who already had experience with a similar system of the previous type participated in the “Rocket chair” test program. These were Robert Kourter, William Sutor, John Spencer and others. Wendell Moore, as far as is known, after the accident at the tests of the previous apparatus, he no longer dared to fly on his designs. Nevertheless, there were enough people who wanted to experience new equipment without it. Preliminary tests on a leash helped determine the main features of the behavior of the device in the air. Also, the pilots were able to master their management. The testers, who flew on both of the Moore team’s development, noted that the new “Chair” was noticeably easier to manage than the previous “Belt”. He behaved more stable and demanded less effort to hold in the right position.

30 June 1965, the last tethered flight took place. By this time, the final design was completed. In addition, test pilots studied all the features of piloting and were ready for free flights. On the same day, the apparatus’s tanks were again filled with hydrogen peroxide and compressed nitrogen, after which it was brought to the open area. Without any problems, for the first time the device took to the air without insurance and traveled several tens of meters.

Tests of the Bell Rocket Chair product continued until early autumn. On September 2, the last flight took place, during which the maneuverability of the vehicle was tested when flying in an aerodrome with the appropriate buildings. For more than two months, experts conducted 16 test flights lasting up to 30 seconds. The general characteristics of the new device, despite the increase in weight and engine thrust, remained at the level of the base Bell Rocket Belt. 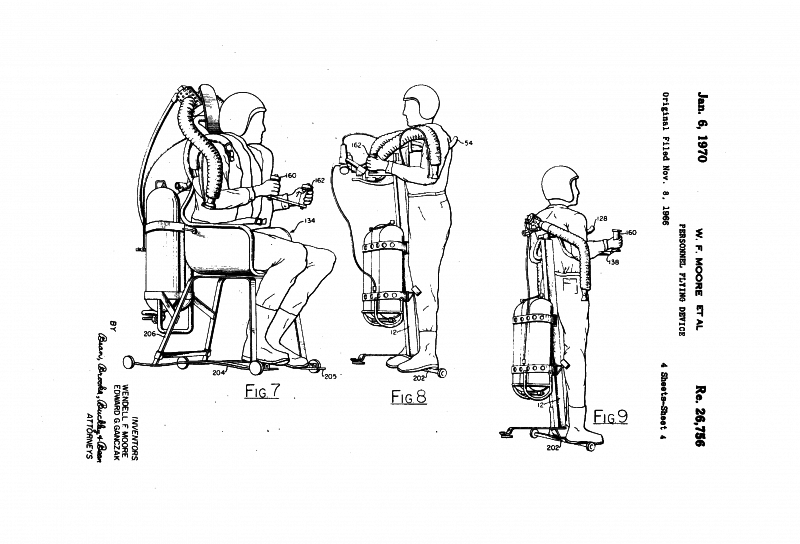 The prospective aircraft was developed by Bell Aerosystems specialists on an initiative basis, without an order from any state structure or commercial enterprise. All the work the developer company paid for themselves. Attempts to offer a new development to potential customers were not undertaken. Remembering the end of the previous project, American engineers did not even try to promote a new one.

The product Rocket Chair made it possible to check the fundamental possibility of increasing the stock of fuel and duration of the flight. Tanks on 7 gallons of hydrogen peroxide was enough for half a minute of flight. Thus, the “Missile Chair” flew one and a half times longer than the “Belt”. However, even this flight duration did not allow to consider the new development as a vehicle suitable for full-fledged operation in practice.

According to reports, after completing the tests in September 1965, the only sample of the "Missile Chair" went to the warehouse as unnecessary. The project completed all the tasks assigned to it, so that it could be closed and move on to other works. 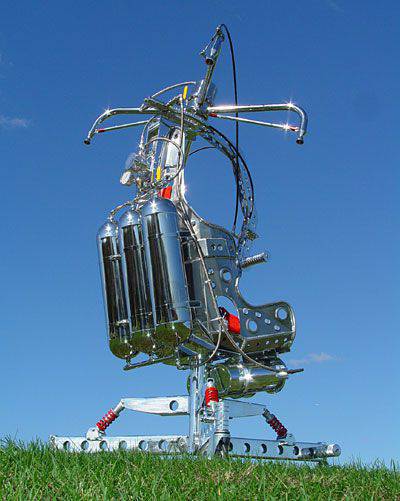 In September, 1966, Wendell Moore applied for another patent. This time the subject of the document was the “Personal Aircraft” based on the frame, seat and engine operating on hydrogen peroxide.

Subsequently, Bell Aerosystems was engaged in the development of other promising projects in the field of aviation and rocket technology. As for the idea of ​​a “flying chair”, it did not disappear. A few years ago, an American enthusiast, Key Hes, built an analogue of the Bell Rocket Chair. Its version of the product has a similar design, but differs in some details. For example, the design of the support frame that performs the functions of the chassis has been changed. In addition, additional fuel cylinders were installed under the seat. Finally, instead of an engine with two nozzles, the new apparatus uses a design with four pipes and nozzles, which ensures more stable flight behavior. In addition, the design of the control lever associated with the oscillating engine has been redesigned.

The device has passed the test and showed its capabilities. From time to time, an amateur engineer and his staff participate in various events, where they show all the possibilities of unusual rocket technology. 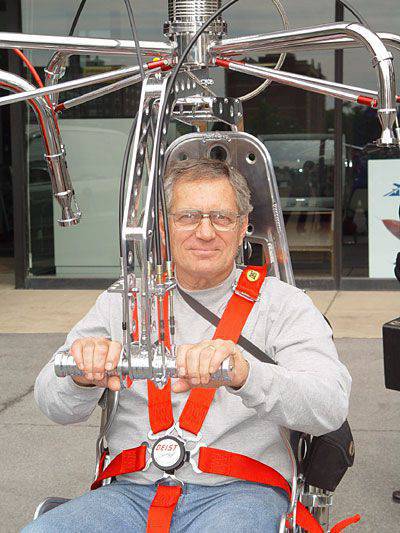 It should be noted that in one of the drawings attached to the patent application US RE26756 E, not only the “Missile Chair” was depicted, but also another version of an individual aircraft based on the same developments. By the time of filing the application, the Bell design team has developed a new version of the modernization of the Rocket Belt system with a change in the overall layout and a slight increase in performance. The new project later became known under the name Bell Pogo, and even interested the organization NASA. This development by Moore and colleagues will be discussed in the next article.