October 14 2015
12
Since the end of September, the Russian aviation participates in the fight against terrorist organizations in Syria. Numerous attacks are carried out on enemy targets using various aviation weapons, including the newest. To date, some types of weapons used to destroy terrorist targets have become known. According to some reports, the fighting in Syria even became a testing ground for testing a new weapons.


October 3 RIA News With reference to an unnamed representative of the Air and Space Forces of Russia reported that Russian military aircraft used bombs and missiles of several types. Among others, KAB-250 adjustable bombs are used. Due to a number of characteristic features, such a weapon can effectively hit selected targets and damage the enemy.

According to the source, the new ammunition, after being dropped from the carrier aircraft, performs an adjustment of its trajectory. The GLONASS satellite navigation system is used to determine the relative position of the bomb and the target. This allows you to use a bomb at any time of the year, regardless of weather conditions. The control systems used ensure that the target is hit with an accuracy of no more than 2-3 meters. All this allows you to destroy objects of the enemy without the risk of damage to civilians. 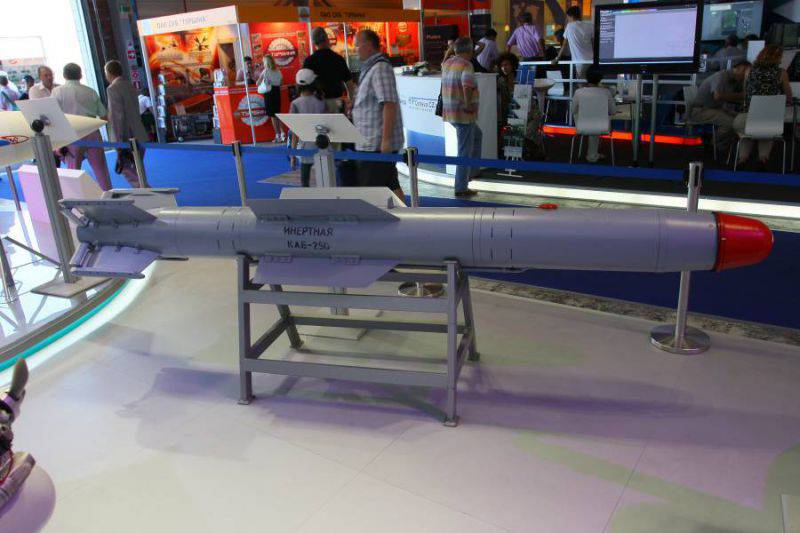 RIA Novosti writes that KAB-250 bomb carriers are Su-34 front-line bombers. These vehicles are capable of dropping new bombs from altitudes to 5 km.

According to others, the latest bomb is currently being tested, but is not used as part of the operation in Syria. About this, in particular, the TV channel "Star". Thus, the issue of using KAB-250 products in Syria is still open and can be a great cause for controversy.

Information published in early October is of great interest. Until recently, detailed information about the project KAB-250 was missing. Were known only the most common information about these weapons, which allowed only to build assumptions. According to RIA Novosti, this weapon has passed some preliminary tests and is already in trial operation, or adopted by the Aerospace Forces.

The existence of a promising adjustable bombs KAB-250 became known in 2011 year. During the MAKS-2011 exhibition, Tactical Missile Weapons Corporation (KTRV) showed a model of this product. Then it was reported that the project of a new bomb was created in the State Research and Production Enterprise "Region". In addition, some of the most common characteristics were announced. Thus, the weight of the bomb was 250 kg, length - 3,2 m, diameter - 25,5 cm, wing span - 55 cm.

Manual KTRV told that the new ammunition is intended to arm promising aircraft. For example, it is possible to transport such bombs in the internal cargo compartments of the T-50 (PAK FA) aircraft. In addition, other weapons can use this weapon. The type of guidance systems was not specified at first, but later new information on this matter appeared.

Back in November 2008, the patent of the Russian Federation No. 2339905 “Aviation bomb, stabilized by roll, with an inertial-satellite guidance system”, received by the State Research and Production Enterprise “Region” was published. The description and attached to the patent image of the product suggested that the document was the result of work on a promising project and describes the design of the bomb KAB-250. The patent, “found” by experts shortly after the first bomb show, made it possible to seriously update the current picture, adding to it a host of interesting details.

From the available data it follows that the product KAB-250 has a standard architecture for such weapons. Inside the cylindrical body with a lively head fairing is all the main equipment. On the side surface of the case, in turn, are installed X-shaped wings and steering wheels. In the head of the body provides a compartment for placement of guidance systems, the middle part is given under the warhead, and in the tail is part of the control equipment, primarily steering machines.

According to some sources, the promising bomb is equipped with a high-explosive fragmentation warhead weighing 127 kg. The remaining weight of the product falls on the structural elements, control equipment, etc.

The patent number 2339905 mentions the curious features of the new project concerning the used guidance systems. Due to certain circumstances, the authors of the project proposed using a combined guidance system that could significantly improve the accuracy of the attack of the chosen target.

In the patent it is noted that the maximum accuracy of hitting the order of 3-5 m is ensured only if there are differential referencing stations with previously known coordinates. In the absence of such stations, the accuracy of the attack decreases markedly: deviation from the target can reach 20-30 m. In combat conditions, it is far from always possible to deploy binding stations. To work in such conditions is proposed a combined guidance system.

In order to improve the accuracy of hits, it is proposed to equip a so-called bomb. Closer - additional infrared homing head. Such equipment allows to solve several existing problems. First of all, the infrared homing device will greatly increase accuracy. The second plus of such a proposal is the absence of the need to use the antenna for receiving differential corrections. In the latter case, the composition of the equipment of the bomb is reduced and considerably simplified.

The combined guidance system proposed in patent No. XXUMX allows the bomb to be outputted to the target area using navigation satellite signals, after which, in order to improve accuracy, infrared homing should be included in the operation. That he must "bring" the bomb to the goal. As a result, high accuracy is achieved without the need for relatively sophisticated equipment. So, in the patent it is noted that infrared seeker can be used as part of a bomb with a range of search and target acquisition no more than 2339905-2 km.

In the new project, it was decided to abandon the use of some components and assemblies, replacing them with more convenient to use counterparts. So, the domestic bomb KAB-500С, according to the available data, is equipped with an electric turbine generator, which generates energy under the action of the powder gases of a special igniter. After the generator, the gases are fed to the steering cars, where they are used to control the rudders. The new project KAB-250, apparently, implies the use of simpler systems. So, for the power supply of electronics, it is proposed to assemble the bomb with batteries, and equip the rudders with air-dynamic drives using an incoming air flow.

According to the patent, the use of a promising aerial bomb is as follows. Before resetting, the coordinates of the target are loaded into the memory of the product. They can be known in advance or determined by the carrier aircraft before using the weapon. After dropping due to the wings and the available speed, the bomb is directed to the target, correcting the trajectory with the help of the rudders. At this stage, control is carried out by satellite guidance system. At a distance of the order of 2-3 km, an infrared homing head with a pre-loaded image of the target is switched on. At a relatively short distance from the target, this GOS assumes control of the bomb and ensures the most accurate destruction of a given object.

It should be noted that in the patent number 2339905 there are no direct indications that say that it describes the product KAB-250. Nevertheless, some of the available data allow us to speak with some confidence about the similarity of the bomb from the exhibition and the product described in the patent. For example, during the MAKS-2011 salon, the inert bomb KAB-250 was demonstrated with a homing cap-cap, which indicated the use of a transparent head fairing and corresponding guidance systems. This feature of the presented sample allowed to say that it should be equipped with an infrared homing system or other similar system having an optical coordinator.

According to the latest data, which has not yet received official confirmation, promising corrected aerial bombs KAB-250 are used to attack terrorist objects in Syria. It is already known about the use of bombs KAB-500С in this operation. Now, apparently, the nomenclature of weapons of the Aerospace Forces of Russia has been replenished with another new type of weapon.

The use of guided weapons, including adjustable bombs KAB-250 and KAB-500С makes it possible to more effectively attack targets with previously known coordinates. Such weapons can destroy small targets with minimal damage to surrounding objects or civilians. In addition, it can reduce the number of aviation departures required and the ammunition consumption.

RIA Novosti reports that since the beginning of October, Russian aviation has been using 250 kg caliber bombs. It is possible that the results of the use of such ammunition have already been published as one of the videos of the Ministry of Defense. The available videos clearly demonstrate the high efficiency of domestic adjustable bombs, including, possibly, the newest KAB-250.

Ctrl Enter
Noticed a mistake Highlight text and press. Ctrl + Enter
We are
An-12 in AfghanistanModern adjustable bombs (CAB) of the USA and Russia
12 comments
Information
Dear reader, to leave comments on the publication, you must to register.