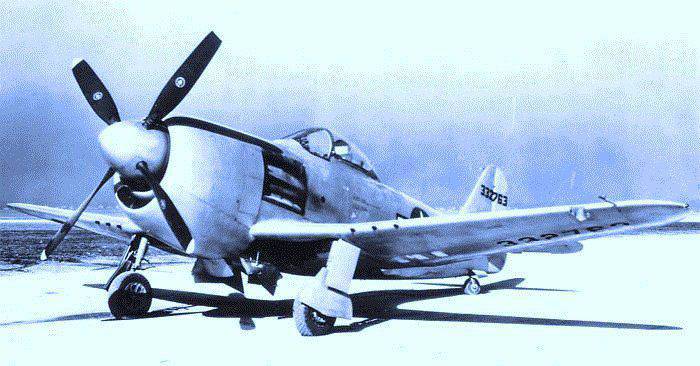 Having told about the P-40 fighter, I think it is worth mentioning the plane, which was supposed to replace the Kittyhock. The heir to the family of the "forties" was to become P-60. History this machine can not be called simple and happy. The plane went through an intricate series of change of engines, equipment, design itself - a development path that can hardly be called direct. The main reason for the failure of the project was a change in army requirements. aviation The United States, as well as the company's attempts to use on its plane all the new ideas in the field of aviation.

Realizing the main shortcomings of the P-40 and its rapid aging, as well as refusing the development of the previous, clearly unsuccessful project XP-46, Curtiss proposed a new project. The new aircraft, bearing the brand name "model 88", was a XP-46 redesigned to the newly developed 12-cylinder liquid-cooled engine Continental XIV-1430-3, take-off power 1 600 hp The “88 Model” was to receive the fuselage and tail from the P-40D and a new wing with the NACA laminar profile. Armament was to consist of eight 12,7-mm wing machine guns. The maximum speed of the aircraft was estimated at 688 km / h. 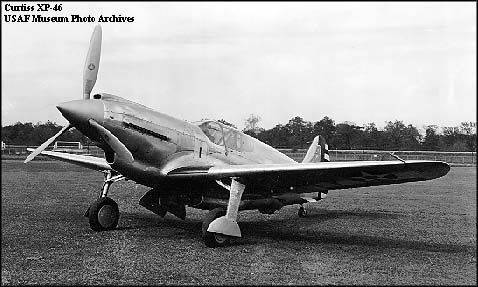 October 1 1940, the US Army Air Force issued an order for two aircraft "model 88" under the designation XP-53. However, at a meeting after six weeks, the army demanded that Curtiss-Wright use the British-developed Merlin engine on fighters. Curtiss offered to convert one of the copies of XP-53 (41-19508) under the engine "Merlin". This aircraft received the internal designation "model 90". The United States Army Air Force approved the project and assigned it the name XP-60. The plane was supposed to get a Rolls-Royce V-1650-1 "Merlin" hp 1300 engine, produced under the license of Packard. The same engine was planned to be installed on XP-40Р. The second copy of the XP-53 planned to finish with the engine Continental.

While the XP-53 and the XP-60 were on assembly, the army decided to cancel the order for the XP-53 because of the expected delay with the Continental XIV-1430 engine. XP-53 didn’t fly into the air. Engine Continental did not get into mass production, and all projects designed for this engine were discontinued.

In November, the 1941 g glider XP-53 was transferred to static tests as part of the work on the P-60, and the bullet-proof glass, retrofit tanks and weapons from this aircraft were used on the XP-60. During the production of the experienced XP-60, it was decided to replace the landing gear, which were removed according to the model of the Р-40 (with a turn around the axis) with new ones, similarly standing on the experienced XP-46.

The XP-60 with the Merlin-28 engine first flew the 18 September 1941. His flight data was disappointing. The maximum speed at the height of 6710 m was only 620 km / h. The height of 4575 m was typed in 7,3 min. The main reason for the lack of speed was that the surface of the wing did not have enough quality performance, which was especially needed for the laminar profile. Another reason was that the Merlin engine did not deliver the declared power. 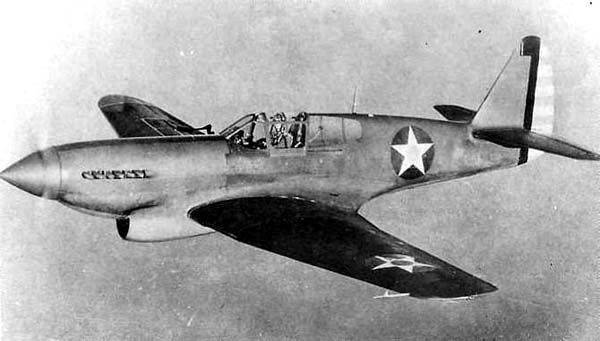 The XP-60 crashed twice due to a non-release chassis. During the tests, it became clear that it was necessary to increase the keel area and make some changes to the aircraft. After the necessary improvements, the aircraft received the designation “model 90А”.

In August, the Packard “Merlin” V-1942-60 1650 HP engine was installed on the 3 of the year on the XP-1350. with a two-speed supercharger. On the plane put a four-bladed propeller. The army changed the designation of the machine to XP-60D, and in the company it was called "model 90В". At the time of these modifications, the army designation with the letters "B" and "C" received new models of the aircraft, and the XP-60D was broken 6 May 1943 of the year.

By the end of 1941, it became clear that the supply of licensed Merlin engines would barely cover the needs of already produced aircraft, and it was clear that the production program for the P-60 would probably have difficulty with this. As a result, they decided to install the Allison V-60 motor on the P-1710 - fairly reliable and affordable. October 21 1941 was contracted to supply the X-NUMX fighter P-1950. Allison V-60-1710 with 75 horsepower, HP, should have been used as a power plant for them. at height 1425 m.

However, 17 November 1941 of the year due to the insufficient power of the Allison engine, it was decided to wait for the appearance of a new, more powerful engine model, or to launch another fighter instead of the R-60А.

After Pearl Harbor, serious doubts arose as to whether it was necessary to interrupt the mass production of the P-40 fighter at such a critical moment, in anticipation of the launch of a completely new aircraft. 20 December 1941 r decided to stop all work on Р-60А, and 2 on January 1942, the order for 1950 Р-60А was replaced with the supply of a larger number of Р-40К and L fighters, as well as the P-47С "Thunderbolts" should have been built under license at Curtiss.

However, the P-60 program did not end there. The army decided to order three more experimental machines: one XP-60A, one XP-60В and one XP-60С. On the XP-60, they planned to install an Allison V-1710-75 engine and a General Electric B-14 turbocharger. The XP-60B with the same engine was supposed to get a Wright turbocharger 511-504-2. XP-60С was built under the experimental 16-cylinder engine Chrysler XIV-2220. Usually, a change of engine led to a change in the name of the aircraft, but in this case, the army decided to limit the change of letters to the modification designation.

The first of the new batch of experienced P-60 was the XP-60. Installing the Allison engine meant using the XP-60A wing from the XP-60 and the new fuselage. XP-60A received another brand designation "model 95A". The bow and fuselage contours of this vehicle have been modified, the armament has been reduced to six 12,7-mm wing machine guns. The plane got a four-bladed propeller.

XP-60A began to make jogs on the airfield at the end of October 1942. During the tests, a small engine fire broke out due to poor cooling of the exhaust pipe leading to the turbocharger. As a result, the turbocharger and exhaust pipe were removed from the aircraft and replaced with a conventional exhaust manifold. His first flight of the XP-60A made 11 November 1942 g. The take-off weight of the aircraft was - 4366 kg. The maximum speed was expected (but in reality it was never attained in tests) in 672 km / h at an altitude of 8845 m and 520 km / h on the ground. The ceiling was estimated at 10700 m. The real speed and rate of climb of the aircraft turned out to be much less than the calculated ones. As a result, the XP-60A was disassembled for parts for the assembly of the following XP-60С and XP-60Е.

The significant increase in flight performance expected on this aircraft spurred the army’s interest in the car and, in November 1942, the company received an order for X-NUMX fighters Р-500А-60-СU for engines Р-1. The first 2800 aircraft of this series were to be delivered as an installation batch under the designation YР-26А. 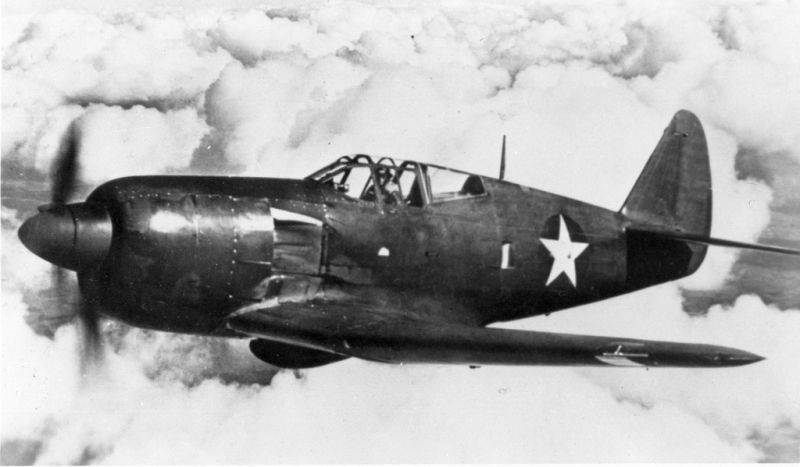 At the end of April 1943, the United States Army Air Forces decided to conduct a series of comparative tests of various fighters at Patterson Field, in order to determine the direction of the continuation of work and select the best fighter. The army offered Curtiss-Wright to set up the XP-60E for these tests for four days. Since the XP-60E was not even flown over, Curtiss-Wright introduced the XP-60C instead.

During tests at Patterson-Field, the XP-60С engine could not deliver full power. In addition, the experienced wing coating peeled off at the leading edge, which significantly reduced the advantages of the laminar profile. As a result, the plane lost visibly in speed, making a bad impression on the army, since Ripablik P-470 and North American P-51В gave way to the army. As a result, there could be no question of any order for mass production for the P-60. In June 1943, the army reduced the order for the Р-60А-1-С11 from 500 to two cars.

After the return of the XP-60 to the company, the tests of the aircraft were continued, but the forced landing led to an accident and the cessation of flights. By this time, the continuation of work on the P-60 has lost all meaning, since the P-47 and P-51 fully complied with the requirements of the army. However, the army agreed to test the XP-60, which did not have time to fly to Patterson Field in May of 1943. 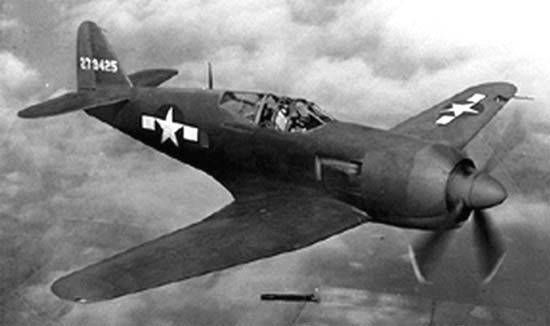 In January, the 1944 of the XP-60E ("950 model") was overtaken by Elgin Field for official trials. Army pilots found that the XP-60E is not particularly superior to the fighters already produced in horizontal speed, but has a better rate of climb. The plane was too sensitive to the controls. Stability on the course and during climb was low.

By May, 1944-th Curtiss-Wright finally realized the futility of continuing work on the P-60 and invited the army to curtail the project. However, the US Air Force insisted on the execution of contracts and, at least, put one of the two YP-60A - all that was left of the order for P-60-1-СU. This aircraft received the designation YP-60E - the same designation modification, that of XP-60E.

Thus, the only one of YP-60A took to the air already under the designation UR-60Е. Actually it was the second copy of the YP-60A. The first flight took place on July 15 1944. From the previous P-60, the aircraft was distinguished by a drop-shaped cockpit lantern and a new keel, which made it look like the Thunderbolt P-47D-25.

A total of two YP-60E flights were made at Curtiss Wright, after which the aircraft was transferred to Wright Field. By that time, the army no longer saw any need for P-60, and no tests were carried out. After the war, YP-60E was put up for sale and purchased by James Landing. In 1947, the aircraft was exhibited at the National Air Racing under the number 80, but crashed during the qualifying flight. 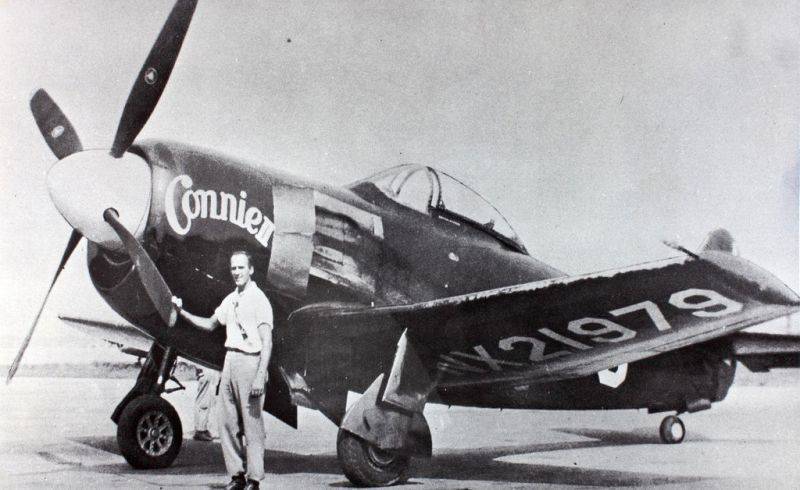 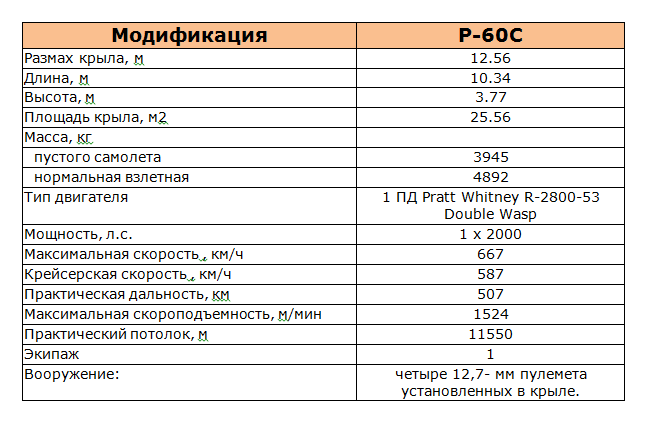 Ctrl Enter
Noticed a mistake Highlight text and press. Ctrl + Enter
We are
P-36 Curtiss. Part II. Under the banner of different countriesP-36 Curtiss. Part I. Unrecognized in his own country
13 comments
Information
Dear reader, to leave comments on the publication, you must to register.