October 12 2015
16
To increase the firepower and combat effectiveness of rocket artillery, a promising rocket launcher Tornado-G was created several years ago. Being a further development of the existing “Grad” system, the new complex has higher characteristics and is able to more effectively solve the tasks assigned to it. MLRS "Tornado-G" has already been adopted and regularly shown to the public at various exhibitions. So, 5 and 6 of October this type of combat vehicle was part of the exposition of the exhibition "Day of Innovations of the Southern Military District", held in Rostov-on-Don.


Work on the modernization of the Grad MLRS began in the eighties. For the first time an updated combat vehicle was tested at the range in 1998 year. However, over the next few years, the upgraded salvo fire system, for several reasons, primarily economic, could not reach mass production. The first contract for the supply of this technology was signed only a few years ago, and the first serial combat vehicles were transferred to the troops no earlier than 2011 of the year. In 2013, the MLRS "Tornado-G" was officially adopted by the Army.

The 9K51М “Tornado-G” reactive volley fire system is a modernized version of the “Grad” complex, which included a number of new equipment. In addition, the updated project involves the use of several new missiles with increased accuracy characteristics and new combat units. In this case, the possibility of using existing munitions of the old types is fully preserved. 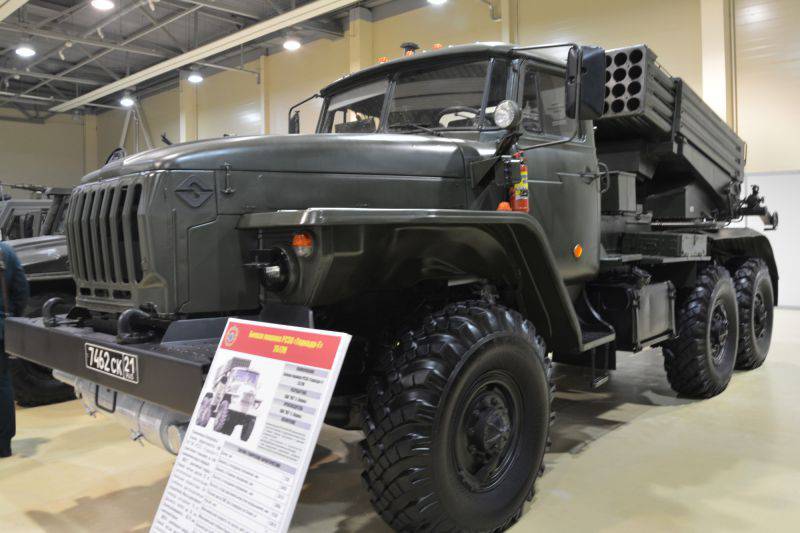 Improving the characteristics of the upgraded MLRS is achieved, first of all, through the use of a set of new equipment. Thus, an updated gunner’s control panel, satellite navigation equipment, and a computer for processing incoming information and weapon control are installed in the cockpit. The package of rockets guides is additionally equipped with automated drives for remote control and equipment for remote data entry into the missile guidance systems.

The project of upgrading the volley fire system to the state of "Tornado-G" allows not only to build completely new combat vehicles, but also to update the existing ones by installing new equipment. Thanks to this approach, the new combat vehicle 2B17М fully preserves the basic characteristics of the basic equipment. As before, the work of the complex is managed by the calculation of five people. When driving on a highway, the wheeled vehicle accelerates to 75 km / h.

Thanks to the new equipment, the time required to prepare for shooting has been significantly reduced. After arriving at an unprepared firing position, the Tornado-G can open fire within 3 minutes. A volley of all ammunition from 40 missiles takes at least 20 seconds, depending on the rate of fire. For a short time after the completion of the shooting, the vehicle may leave the firing position. Some sources claim that the MLRS of a new model may leave the position before its missiles fall on the target.

Within the framework of the Tornado-G project, several new 122 mm caliber missiles have been developed, proposed to enhance the performance of the complex. The 9М217 product is equipped with a cluster warhead weighing 25 kg with armor-piercing submunitions. Such a projectile delivers the warhead to a distance of 30 km. Ejected combat elements punch up to 60-70 mm homogeneous armor. The 9М218 missile also carries a cluster warhead, but it is completed with submunitions with higher characteristics. They are able to penetrate up to 100 mm of armor.

The creation of new missiles with increased flight range has been mentioned repeatedly. At the expense of such ammunition, you can significantly increase the range of rocket artillery, up to 100 km. The combat effectiveness of a battery armed with modernized MLRS also increases accordingly.

For certain reasons, the purchase of serial MLRS "Tornado-G" started only at the beginning of this decade. The first information on this matter appeared in 2011, but in 2012, the leadership of the Ministry of Defense refuted it. It was noted that the new technology has not yet been tested, but should soon go to the troops. The first combat vehicles of the new type were handed over to the armed forces in the middle of the 2012 year. In the future, the construction and supply of such equipment continued.

According to some reports, to date, the ground forces have received at least fifty 2B17M Tornado-G combat vehicles. Such equipment is supplied to various units, including artillery units of the Southern Military District. One of the MLRS operated in the Southern Military District recently became an exhibit of the Innovation Day exhibition. We present a photoreview of this car. 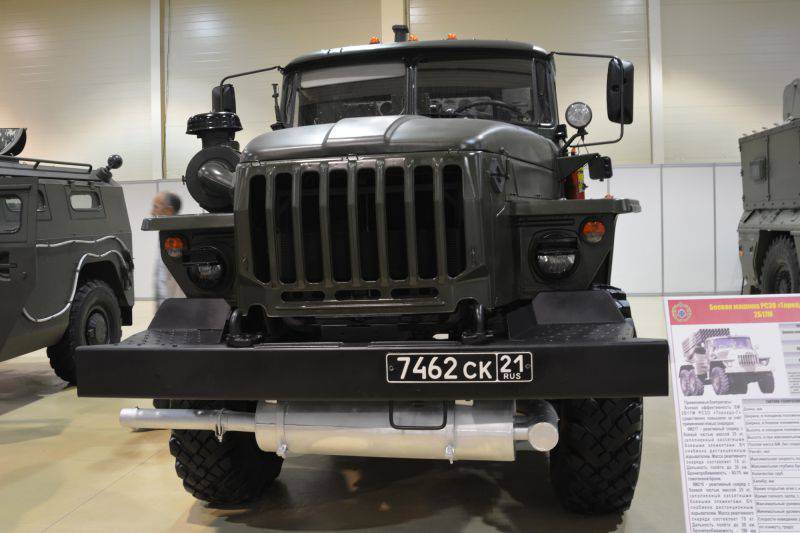 As before, the MLRS is based on the Ural-4320 chassis. 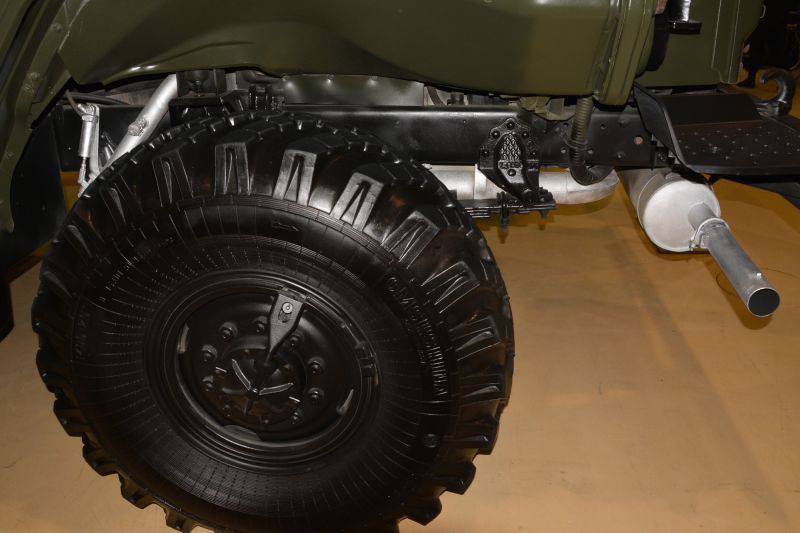 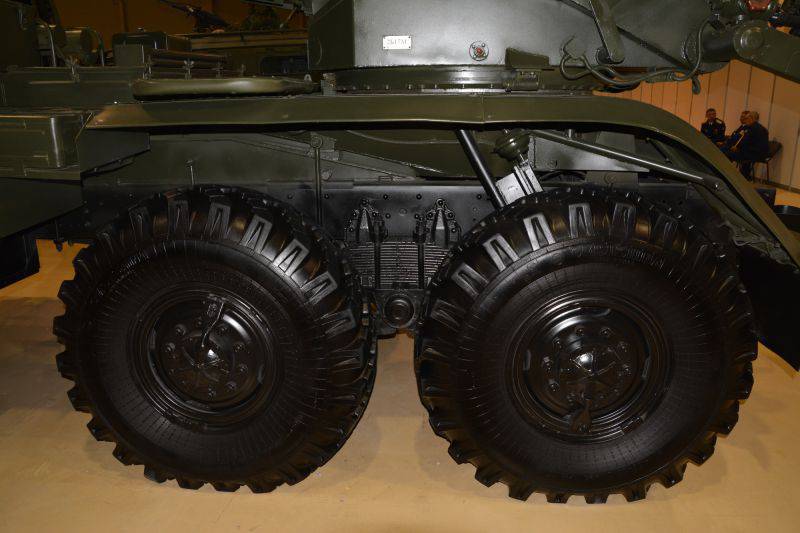 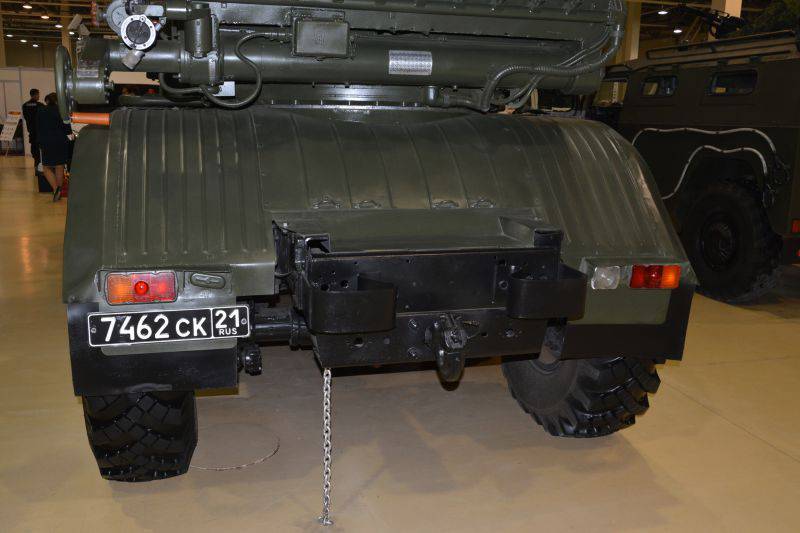 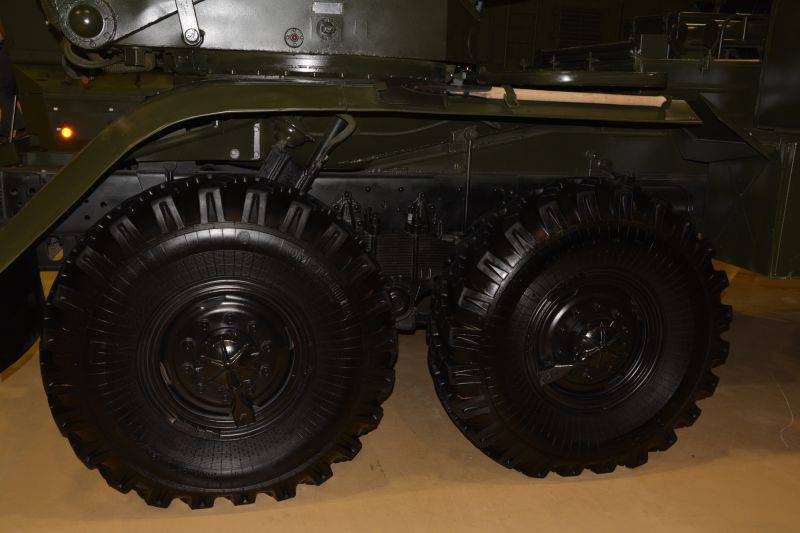 Chassis components of the base chassis 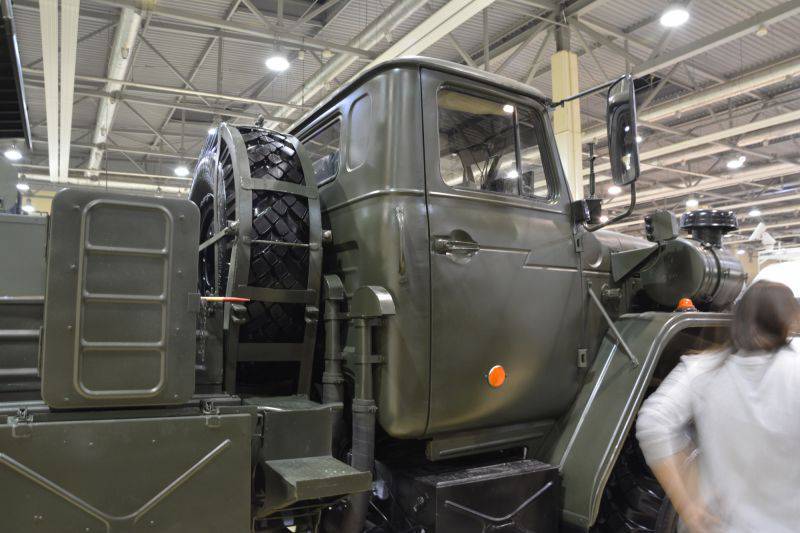 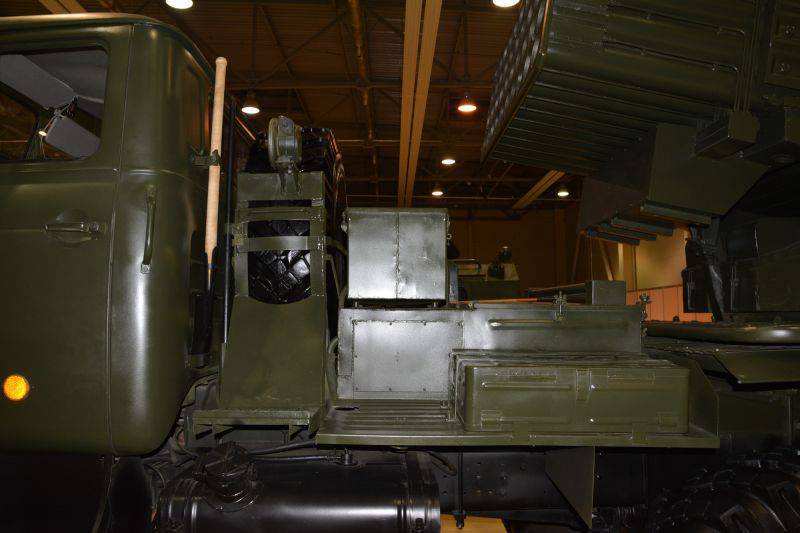 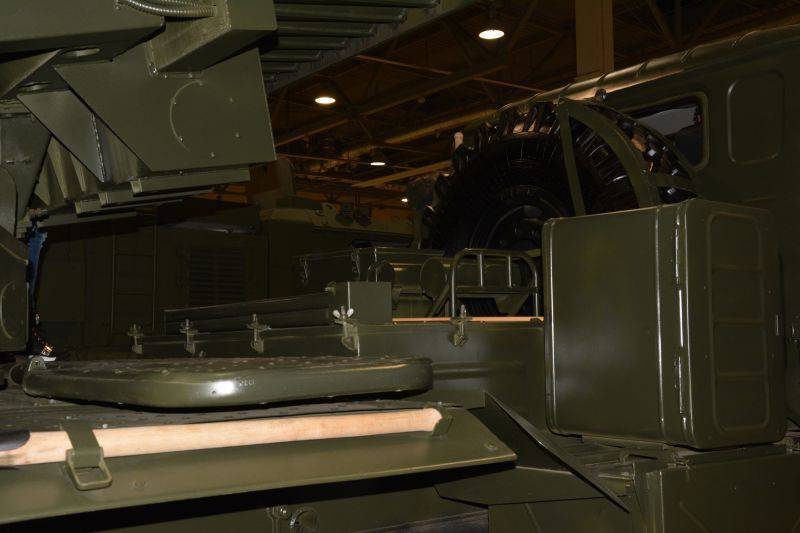 Behind the cab, on the cargo platform, the spare wheel and part of the special equipment are still located. 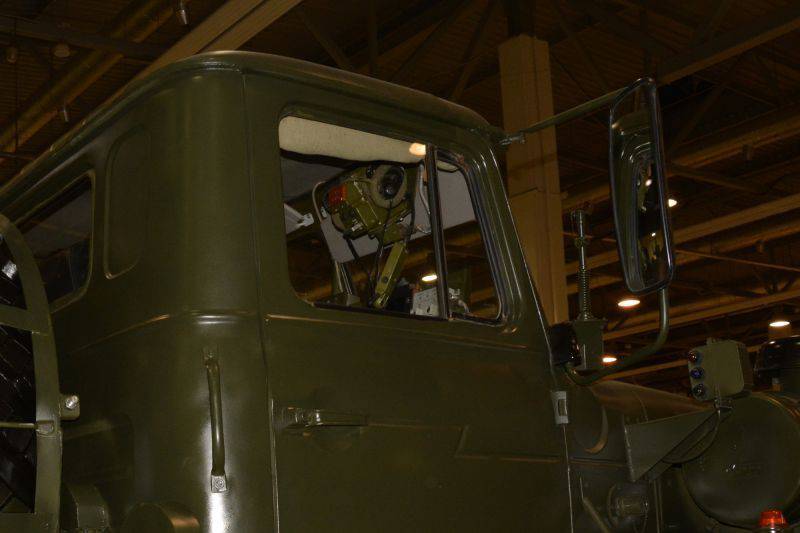 A new gunner console is installed in the cockpit. 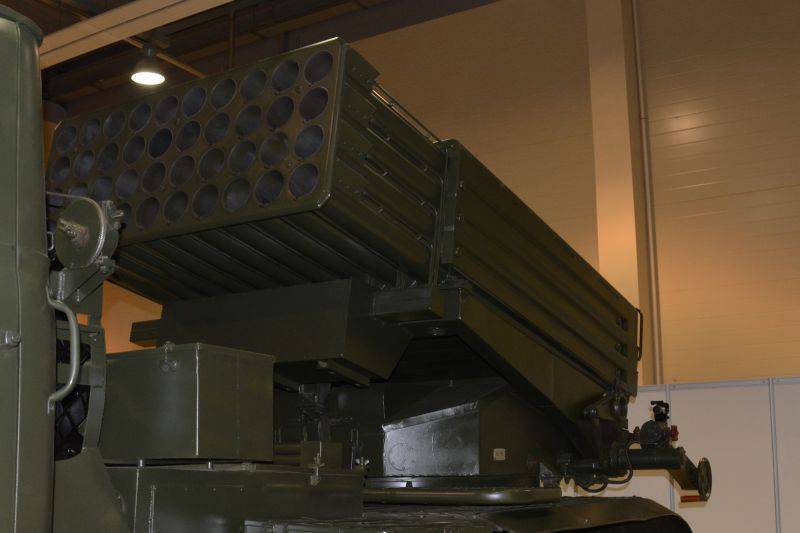 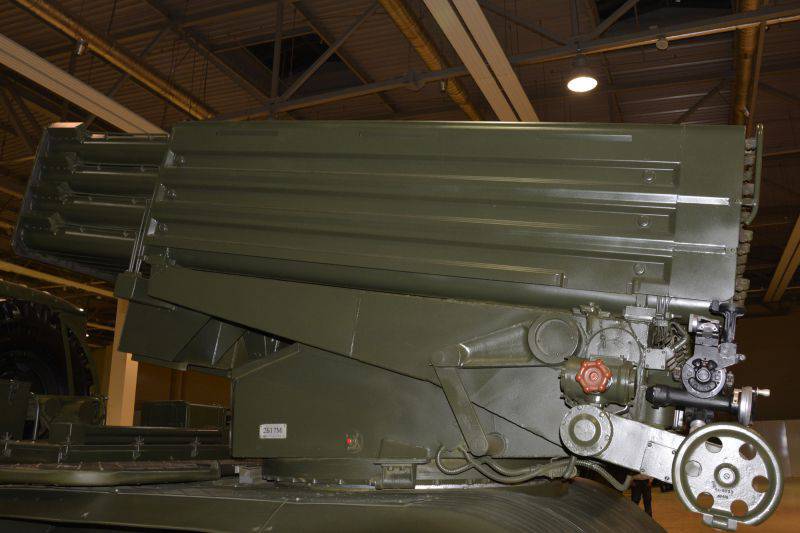 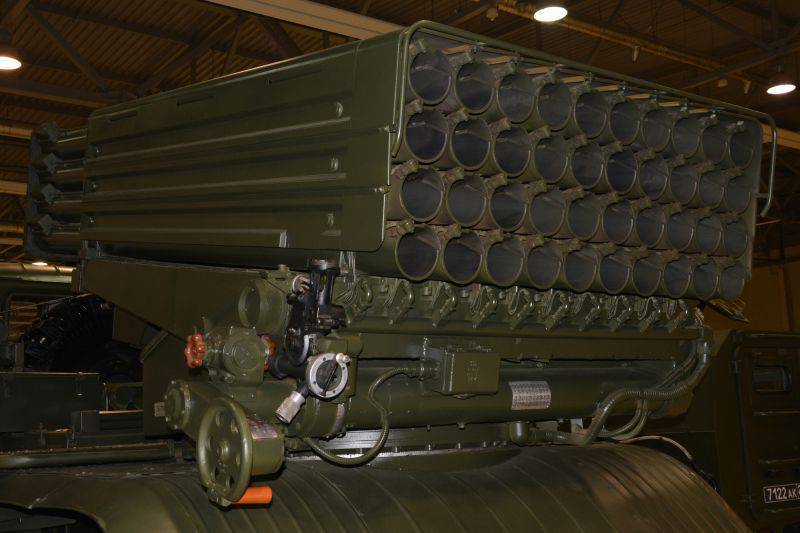 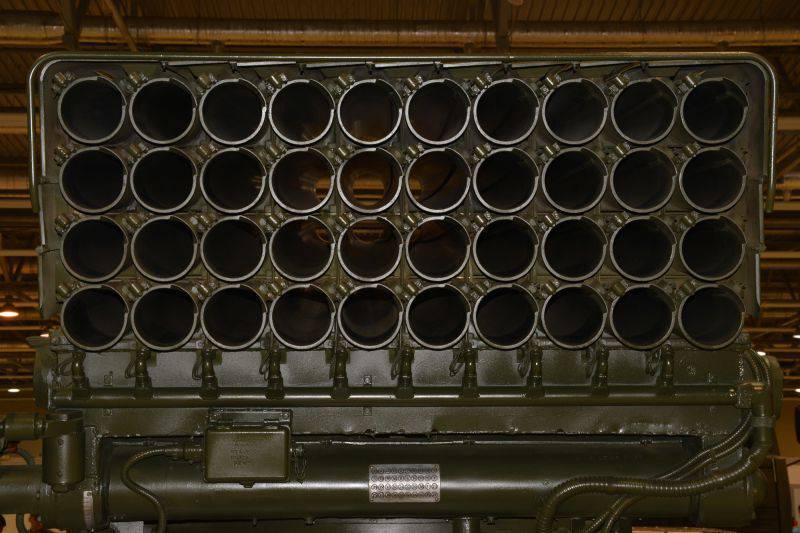 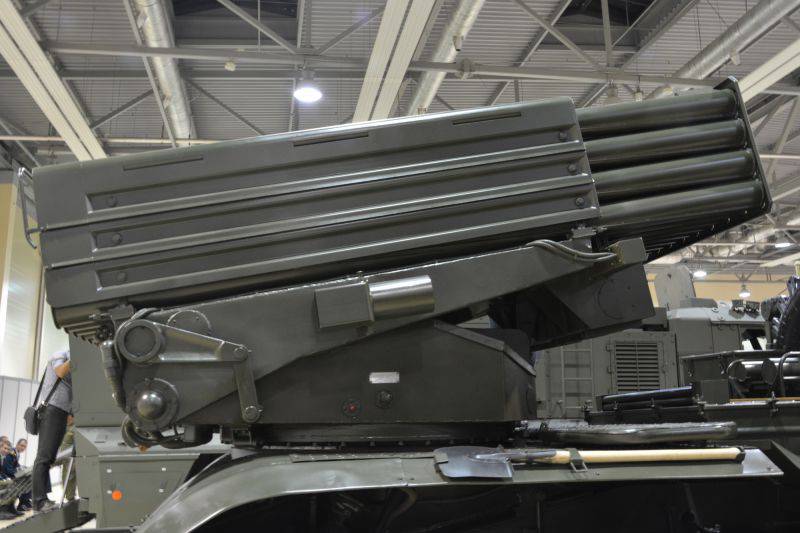 Updated launcher. Inside the armor cover under the front of the barrel is part of the new equipment 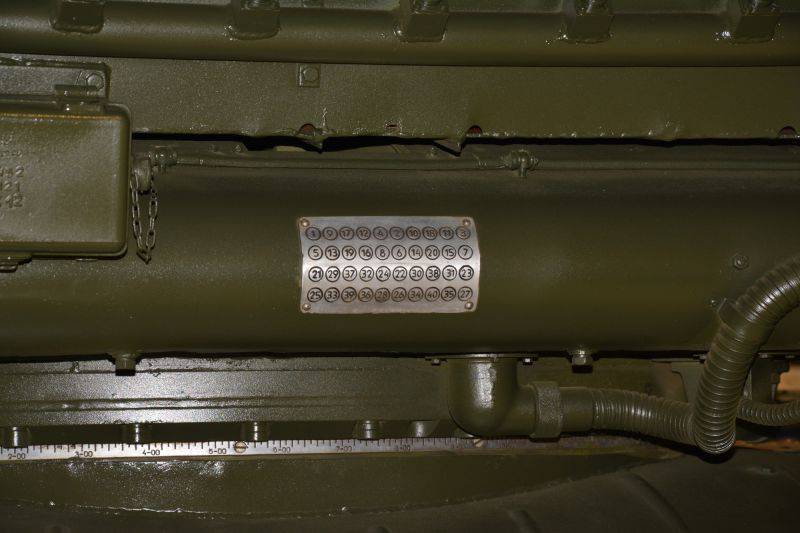 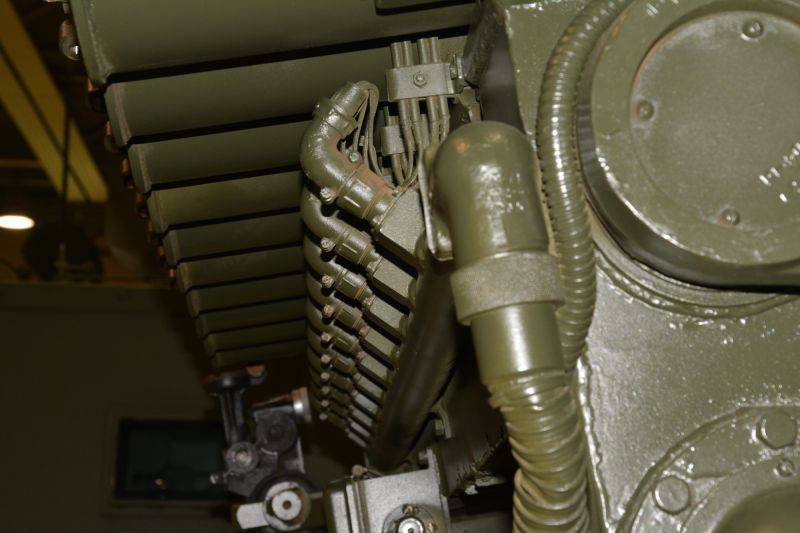 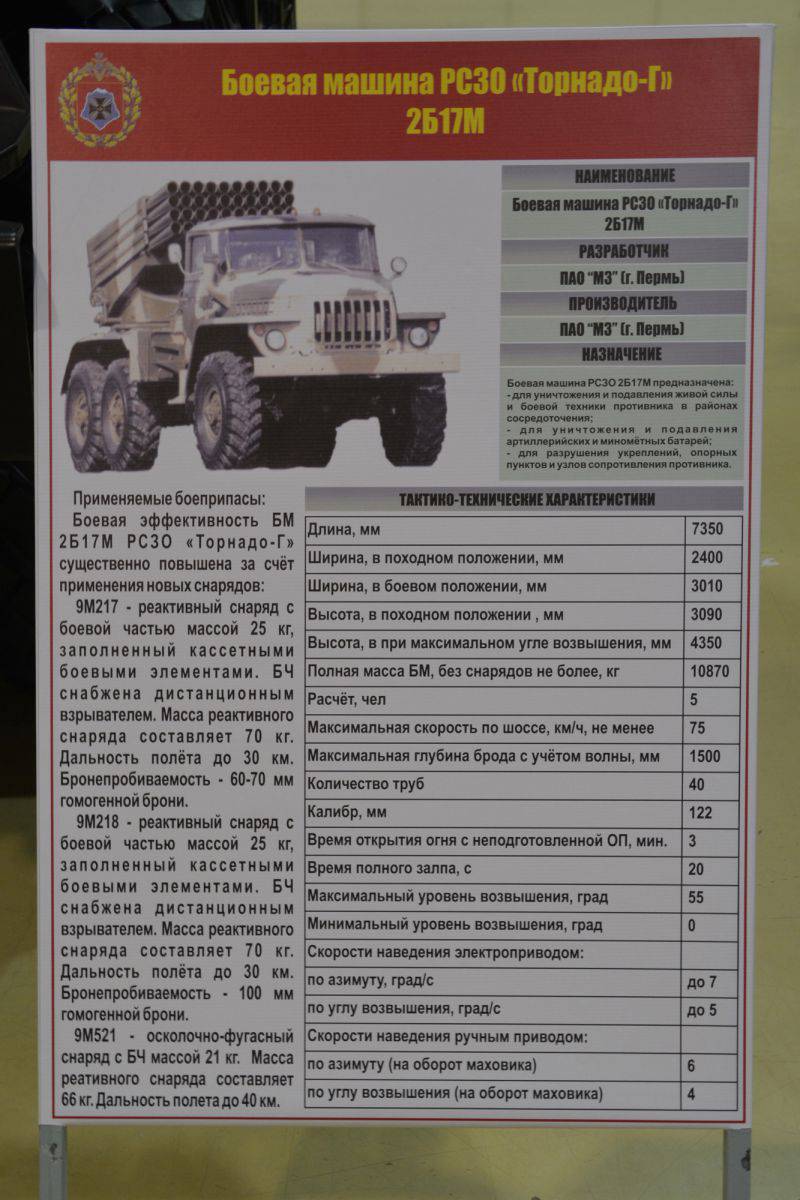