October 9 2015
251
Since the end of September aviation A group of Russian Aerospace Forces, based at the Khmeimim airfield near Latakia, carries out regular attacks on the positions and targets of various terrorist organizations operating in Syria. On October 7, naval ships were involved in the operation. fleet. In the early morning of Wednesday, the sailors of the Caspian flotilla carried out a massive missile attack on enemy targets. This attack immediately attracted the attention of experts and the public around the world.


Information about missile firing appeared a few hours after the launch. Defense Minister Sergei Shoigu reported to Russian President Vladimir Putin on the successful accomplishment of the combat mission. According to the minister, the ships of the Caspian Flotilla launched 26 cruise missiles of the Caliber complex, the purpose of which were 11 enemy targets. As a result of this attack, all the intended targets were destroyed. Civilians are not injured. The head of the military department also noted that the results of these strikes confirmed the high effectiveness of the Caliber missiles in strikes at long distances. So, to achieve their goals, the missiles had to overcome about 1500 km.

A little later, Colonel-General Andrei Kartapolov, Chief of the Main Operations Directorate of the General Staff of the Armed Forces, spoke about missile launches. According to him, 5 and 6 of October, Russian intelligence officers found several important objects of terrorists in Syria, to be immediately destroyed. Before the strike, the Ministry of Defense specialists collected all the necessary information from various sources and conducted a computer simulation of the upcoming operation. Only after that the necessary data were used for the ships of the Caspian Flotilla, which were used in the missile attack.

Also, the Russian military agreed a blow to the militants with foreign partners. As seen in the published schemes, the route of the missiles ran over the territories of Iran and Iraq. Apparently, the authorities of these states were warned in advance about the attack and gave their consent to a rocket attack on terrorists.

Missile launches were performed in the southwestern region of the Caspian Sea. The rocket ship Dagestan (11661 project Gepard) and three small missile ships of the 21631 project Buyan-M: Grad Sviyazhsk, Uglich and Veliky Ustyug were involved in the operation. Even before dawn of 7 October, the ships reached the launch area and fired. The targets were aimed 26 missiles complex "Caliber". The exact type of these products has not yet been clarified.

A. Kartapolov noted that the planning of the operation took into account the safety of the civilian population. Therefore, in particular, the corridors of flight of rockets were laid over deserted areas. Within hours, cruise missiles reached their targets in the provinces of Raqca, Idlib and Aleppo. The purpose of the attack was to destroy 11 of various objects: command and control centers, ammunition and fuel depots, training bases, and munitions and explosive devices factories.

According to the Department of Defense, all 11 targets were successfully destroyed. Crews of rocket ships of the Caspian Flotilla coped with the task and left the terrorists without a number of important objects.

In the afternoon of October 7, the military department published a video about the morning rocket attack. The operators captured missile launches from all the ships involved in the operation. In addition, the flight route of the missiles to their targets was shown. Also in the video were some other interesting moments that are of interest both to specialists and to the general public. In particular, the mark was attended by the Tu-160 bomber mark, which was located above the eastern part of the Caspian Sea during the launch of missiles from ships.

The October 7 missile launches are of great interest for a variety of reasons. Firstly, because the navy joined the strikes against terrorist facilities. Earlier, only aircraft destroyed the bases, camps and factories of the militants. The second reason is related to the fact that the Caliber missile system has never been used in real combat operations. To date, a large number of test and training launches have already been performed, but such missiles have not yet been used in combat. The third factor that causes interest in the subject is the technical characteristics of the missiles. A strike on targets in Syria made major adjustments to the existing open information about the Caliber complex. Finally, such an operation may affect the military-political situation in the region.

The development of the Caliber missile system dates back to the early eighties, when Soviet industry began work on several new projects. In the future, existing developments became the basis for new ones, as a result of which a number of promising cruise missiles appeared, in particular 3М-54Э and 3М-14Э. These products, created by experts of the Novator Design Bureau (from the beginning of the two thousandth, are part of the Almaz-Antey Air Defense Concern), eventually became the basis for a new missile system, which can be equipped with missiles with different characteristics and different combat units.

The most important feature of the Caliber complex is its versatility. There are four options for this system. The Caliber-NK is intended for installation on surface ships, the Caliber-PL is proposed for submarines, the Caliber-A is designed for use by aviation, and the Caliber-M is a mobile land complex. For use as part of a modification of the complex rockets with various equipment and characteristics are offered.

Tests of rocket complexes of the Caliber family began relatively long ago. For example, verification of a modification of a complex designed for submarines was completed in 2004 year. In the future, the Novator Design Bureau continued work on the promising complex. In particular, several years ago, the Club-K missile system was presented, launchers and other equipment of which are mounted in standard 20 or 40 foot containers. This complex also belongs to the “Caliber” family and uses its rockets. 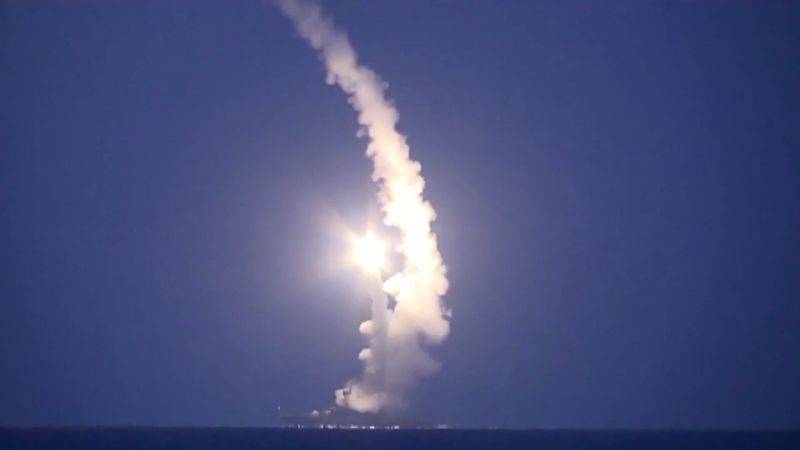 Missile launch by the ship of the Caspian Flotilla. Shot from the clip of the Ministry of Defense

October 7 used Caliber-NK missile systems on ships of the Caspian Flotilla to attack terrorists. The type of missiles used has not yet been announced, but it can be assumed that these were products of one of the modifications 3М-54 or 3М-14.

Available information about the first combat use of the Caliber missiles seriously changes the existing picture. The fact is that earlier the development organization announced only the characteristics of the export complex, but was in no hurry to disclose information on weapons for the Russian Navy. In particular, the maximum range of the missiles was indicated at the level of 300 km - the maximum possible for export rocket systems. Existing international agreements prohibit the sale of missiles to third countries with a range of more than 300 km.

The scheme of strikes against targets in Syria, published by the Russian Ministry of Defense, shows that the missiles flew much more “export” 300 kilometers. In addition, the Secretary of Defense stated that they overcame about 1500 km. Thus, the missiles of the Kalibr complex, intended for the Russian armed forces, are several times longer than export modifications, which are regularly shown at exhibitions. This feature of the complex could not fail to attract the attention of specialists and lovers of military equipment.

It should be noted, some information about significant differences in the characteristics of missiles appeared a few years ago. Thus, in the summer of 2012, the commander of the Caspian Flotilla, Rear Admiral Sergei Alekminsky, made some statements about the ship "Dagestan", which was being tested at that time. The commander noted that the ship had a missile system installed that allows attacking surface targets at a distance of up to 375 km and ground targets at distances up to 2600 km.

In September last year, the commander of the Black Sea Fleet, Admiral Alexander Vitko, spoke about plans to re-equip his operational-strategic alliance. According to the admiral, in the future, the Novorossiysk naval base will become the duty station of the newest submarines armed with the most modern missiles with a range of up to 1,5 thousand km. Apparently, A. Vitko had in mind the submarines of the 636 Varshavyanka project, which are armed with the Caliber-PL complex.

Thus, information about the approximate range of missiles of the Caliber complex, even with a sufficiently large spread, appeared long ago, but has not yet been documented. The October 7 attack demonstrated all the capabilities of the newest missile systems.

Emerging information about the characteristics of the range of missiles "Caliber" will not be ignored by foreign military and politicians. With a range of at least 1500 km, missile systems of ships or submarines become very formidable. weaponsable to control large areas. For example, ships of the Caspian flotilla, moving across the Caspian Sea, can control a large region of the Middle East, up to the northern regions of the Gulf of Aden and the northern regions of the Arabian Sea. In addition, there is the possibility of attacking targets in Eastern Europe.

Rear Admiral Alekminsky last year talked about the newest ships of the Caspian Flotilla with missiles, whose range reaches 2600 km. In this case, Eastern and Central Europe, up to Germany, as well as part of Scandinavia, fall under the responsibility of the Caliber missiles. In addition, control over the Middle East remains and the possibility of attacking targets in the Mediterranean. In this case, the submarines of the Black Sea Fleet will receive no less shock potential. Moving across the Black Sea, the Varshavyanka submarines can change the boundaries of the controlled area.

The latest information about the Caliber missile system can be a signal to “foreign partners” and show them that Russia has a new high-precision weapon with the highest characteristics that allows it to control large areas near the borders of the country. Thus, it can be assumed that the massive 7 October missile attack pursued not only purely military, but also political objectives. In one operation, more than a dozen enemy targets were destroyed, and also to demonstrate the military might of the fleet.

Four ships successfully destroyed the targets and left the missile firing area. The Aerospace Forces group, in turn, continued to destroy the objects of terrorists with air strikes. The fight against terrorists continues and will last for some time. It is quite possible that the Caliber will not be the last surprise from the Russian Ministry of Defense.

Ctrl Enter
Noticed a mistake Highlight text and press. Ctrl + Enter
We are
Prospects for the development of the Caspian FlotillaThe experience of combat use of US-based cruise missiles and the main trends in their development
251 comment
Information
Dear reader, to leave comments on the publication, you must to register.