Destroy at a depth of 20 meters: Russian weapons in Syria

October 10 2015
116
For a long time, Russia fought the “Islamic state” (banned in Russia) on its territory with the help of FSB investigators and operatives, who were actively calculating the Russians who wanted to leave for jihad. But time passed, and the front-line role in the struggle against the followers of the Caliphate took aviationcarrying under its wings hundreds of kilograms of deathly gifts for executioners and slave owners. "Military.RF" figured out what our bombers and attack aircraft take off, flying over the Syrian desert, and whether the jihadist can hide from the pilots of the Su-34.


In the last week, the headlines of various media outlets and the presenters' speeches are almost entirely made up of solid "bombers", "attack aircraft", "air strikes" and so on. Perhaps, even the most distant from the army and geopolitics, Russian citizens know which planes of the Aerospace Force were sent to Syria to bomb the positions of militants of the Islamic State terrorist organization banned in the Russian Federation and what makes Su-24 different from Su-25. And at the same time, little is said about the armament with which our planes are equipped. At the same time, some bombs are the latest developments and are used for the first time in combat conditions. 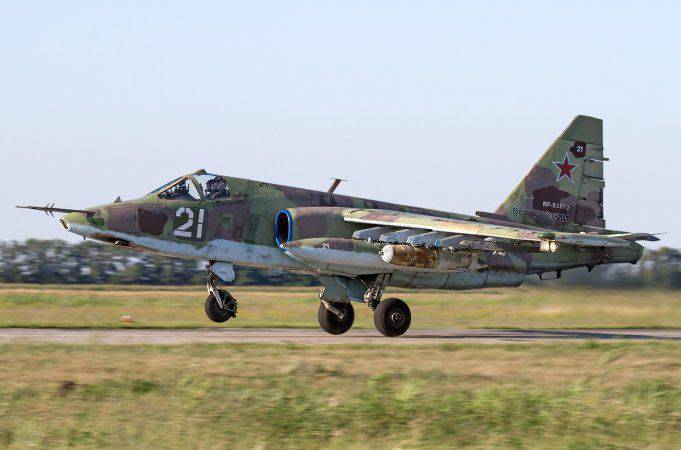 Take off Su-25 with FAB-500
A high-tech novelty, without a doubt, is the bomb KAB-500С adjusted via GLONASS. It falls along a ballistic trajectory, and targeting to a target occurs automatically according to the coordinates specified before the reset. The pilot marks the target with a kind of "black mark" and after dropping the bomb begins to plan for it. The distance that the projectile can deviate from the designated coordinates is five meters. The weight of the bomb is 534 kg with the weight of the warhead 400 kg. Discharge range (except for ammunition with an engine) - 6-8 kilometers. And it is precisely the range of application of this weapons along with the cost of about three million rubles per unit at one time were the main objects of criticism from the Ministry of Defense.

Three years ago, an anonymous officer of the High Command, then the Air Force, told the media that the military had finally decided to abandon the use of the smart bomb. However, in the video above, the Su-34 bomber is equipped with it, although there were no official reports that this bomb was accepted into service by the Russian army.

It turns out that in Syria for the first time it will be used for real, not educational purposes. So the slaughtering militants of the IS and the representatives of the "moderate Syrian opposition" who do not disdain abductions and terrorist acts can help our videoconferencing with new tests in combat by their very existence.

Another adjustable bomb on our aircraft in Syria is the KAB-1500L-F. As the name implies, its mass is about 1500 kilogram. It is worth noting that this representative of the family of bombs like KAB can literally get terrorists out of the ground, penetrating the ground to a depth of 20 meters and exploding there already. And the love of jihadists hiding under the ground makes the bomb an indispensable object under the “belly” of the Russian Su-34.

Bombing can be performed using a television head or laser targeting from the ground. This large-caliber version is designed to hit targets in especially strong fortifications and fortification points. The bomb is able to penetrate through the ceiling thickness of up to three meters. But with a deviation from the target, the 1500-kilogram projectile is worse than the lighter “relatives”. KAB-1500 deviates from the set target at a distance of 10 meters. In most cases, this does not play a special role, given the power of the projectile, but to call it a "precision weapon" with such a level of deviation is only possible with a stretch. 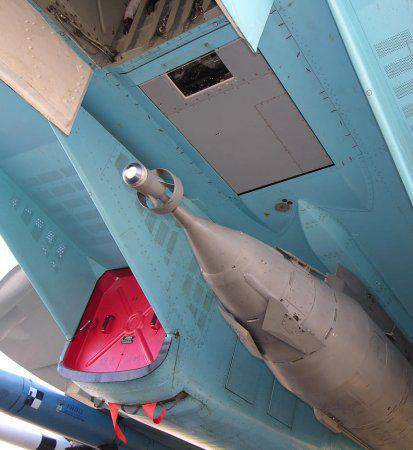 Adjustable aerial bomb KAB-1500
Another Russian weapon used in Syria, capable of reaching terrorists even in their sturdy shelters, is the concrete bomb BETAB-500. It was with this type of missile that the US bombed Iraqi underground bunkers in the hope of getting Saddam Hussein during his last invasion of this country.

BETAB-500 weighs 500 kilograms and is produced in two forms: free fall (BETAB-500U) and with a jet accelerator (BETAB-500ШП). The first version of the bomb breaks through the reinforced concrete meter 1,2, dropped from altitudes from 150 to 20 000 meters at aircraft speed from 500 to 2 300 kilometers per hour. The shell was created for the destruction of underground warehouses and concrete shelters for military equipment. By the way, with the help of its Su-34 bomber, the Russian Aerospace Forces have already destroyed the underground command post of IG militants.

A variant of a bomb equipped with a jet accelerator is designed to destroy runways and roads. When exploded, the ammunition creates a funnel with a diameter of 4-6 meters, and if it hits the asphalt road section, the surface is damaged over an area of ​​up to 50 square meters. At the same time, the armor-piercing rate of the bomb is reduced by more than half compared to the previous version. BETAB-500SP pierces armor up to 55 centimeters thick.

The speed and heights at which it can be dropped are also limited. The bomb is used at aircraft speeds from 700 to 1150 kilometers per hour and altitudes from 170 to 1000 meters. It is easy to see that when finding at such a speed and height the plane becomes especially vulnerable for enemy air defense systems. Moreover, bombers at such a height can suffer even from outdated anti-aircraft artillery systems. The objectives of the use of this bomb and the indicators that the aircraft must reach for its discharge, indicate that BETAB-500ШП is unlikely to be used in this conflict.

Despite the above technological weapons, high-explosive aerial bombs FAB-250 and FAB-500 remain the main "workhorses" of the Russian Aerospace Forces in Syria. This can be judged by the video of the air strikes submitted by the Ministry of Defense and the return of the planes with the Kabb-series not thrown bombs, but with the "fabs" missing under the wings.

High-explosive aerial bombs (FAB) have quite a destructive effect acceptable for a given conflict. They are used for manpower and equipment of the enemy, as well as not fortified communications. It is worth noting that fortifications of the IG are for the most part artisanal, so the need for dropping bombs or penetrating concrete on them is not always the case, it is often possible to dispense with FAB, as during an air strike, the record of which is presented below.

Such aerial bombs in the Russian military warehouses have accumulated a huge amount, and an alternative to dropping them onto jihadist heads is disposal at the test site. Given this, as well as the decent performance of these weapons, it can be said that the widespread use of FAB will continue.

Also on our aircraft in Syria, high-precision air-to-surface X-29L missiles were observed. The letter "L" in the name of the rocket means that it is equipped with a laser homing system. When a rocket is launched, the pilot illuminates the desired target with a laser, while there is no need for further actions to hold the beam on the target, it all happens in automatic mode. The mass of the missile warhead is 500 kilograms. 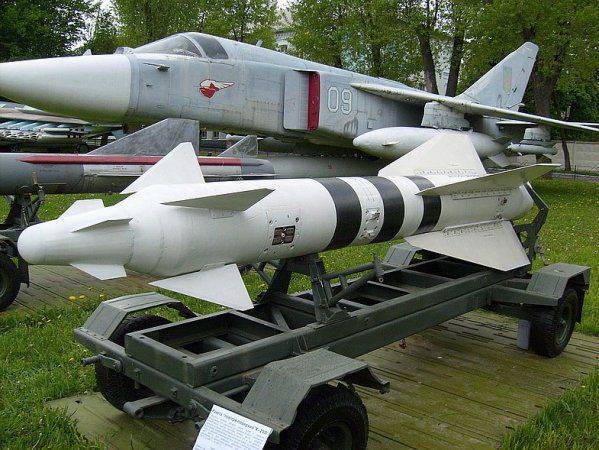 Rocket X-29 in the museum

X-29L is capable of hitting targets with an accuracy of plus or minus two meters. In addition, it has an increased factor of high-explosive and fragmentation action. According to the Russian Defense Ministry, the missile has already been used against the militants in Syria. According to open sources, the unit cost of such a rocket can reach 7000 dollars (approximately 450 thousand rubles).

A weak, but still deadly, air-to-surface missile X-25ML with a semi-active laser homing head is noted in Syria. The mass of the warhead of this rocket is significantly lower than X-29 and is approximately 90 kilograms.

It is worth noting that the position of the militants of our aviation has to be bombed according to intelligence information provided by the Syrian ground forces. Then this information is further confirmed using Russian UAVs. Because of all this, the work that has to be done even before the Russian bomber or attack aircraft begin to prepare for departure, becomes very time consuming. Such temporary costs practically exclude the probability of destroying a target that is constantly moving through the territory, and our aviation has to be content with the destroyed ammunition depots rather than prominent amirs and commanders of the Islamic State (prohibited in Russia).

We are in Yandex Zen
Grouping VKS in Syria. Quantity and quality
116 comments
Information
Dear reader, to leave comments on the publication, you must to register.