Where is Ukraine flying? New brainchild of Ukrainian aircraft manufacturers 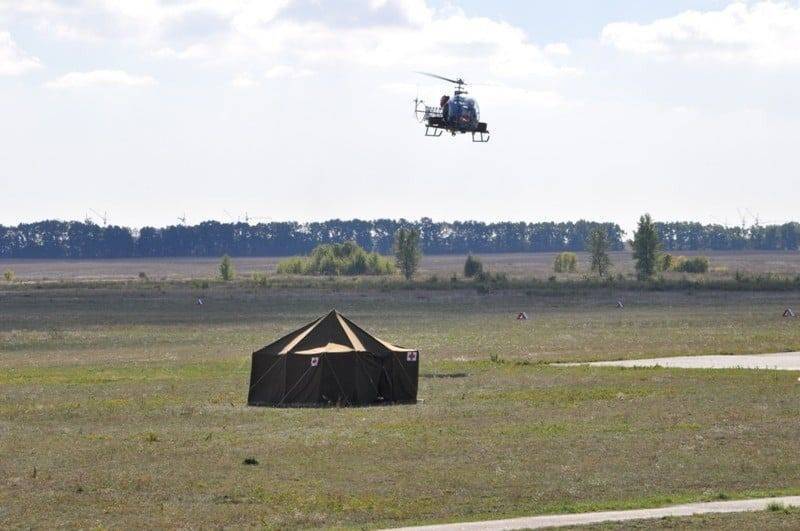 Yesterday an old friend from Kiev called. Old in every way. And by age (met in 1982 year, when he pulled us at his eight from the unpleasant situation in the Afghan mountains), and by friendship. You understand, this is not forgotten. After all the races and burning tires, he did not lose his sense of humor. Well, there has not yet been an event that would not have caused him to desire to pin up or bite.

As you already understood, my former friend is a military pilot, more precisely, a helicopter pilot. A man who is up to heels in love with the sky and ready to talk about his "turntables" for days. A romantic who never became a skeptic.

Therefore, the call from him is always connected with something in the world of helicopters. And anywhere in the world. Something new has appeared - wait for a call with criticism or odes.

It happened this time. Ukraine showed a new helicopter. And not just new, but revolutionary. One name is worth it. "LEO-1".

"The new development is able to quickly evacuate the wounded and injured to the place of providing specialized medical care, promptly deliver specialists (military, civilian) to the scene, patrol and search and rescue operations, transport up to half a ton of cargo.

The helicopter has 3 seats in the cockpit and 2 specially equipped evacuation box on the sides, made by single-rotor scheme with a tail rotor. The base platform of the Lion is the Bell-47 helicopter. The novelty was equipped with a GTD-350 engine (installed on the Mi-2) with a complete overhaul life. "

In short, both laughter and sin. This is me about our further conversation. And we both laughed. He, as a specialist, I - as a person with memory that still does not give failures.

I wonder why he is "LION"? It would be better to call this miracle Yudo "Mammoth -1". Who remembers the helicopter on which it is based? Let me remind you that everything fell into place.

So, the Bell-47 light helicopter was developed in the USA based on the outdated Bell-30 helicopter. The first flight certificate was obtained in 1946 year. Almost 70 years ago. Those who watched old American films about the Korean War could see these cars. The wounded were pulled from the battlefield, the co-pilot watered the enemies with a machine gun. In short, for the time the car is quite justified. And the cost of a penny.

As said honored (in my eyes) helicopter pilot, it is a flying aquarium. But it is not worth substituting for bullets. Especially in our time.

Is the same история and with the engine. Above in the message it is mentioned that the Soviet GTD-350 is installed on the "new" helicopter. Guys, it was designed by designer Klimkin back in 1961 year! And with the 1962 was installed on the Soviet Mi-2. In short, the heart for the American "dinosaur" Ukrainians found in the same era. More precisely, in the dump of a bygone era.

By the way, machine guns were installed on the Americans. Ukrainians also talk about this possibility. So we have an intrigue. What machine gun will be selected? Considering the "love" of everything Soviet and Russian, I think they will choose the best machine gun from the Second World War. MG 42. This is a general purpose machine gun caliber 7,92 mm Mauser, developed in Nazi Germany and adopted by the Wehrmacht in the year 1942. But this is so, for readers to bet. Who put what.

So, Ukrainian Ukroboronservis presented what he presented. October 5 2015 of the year at the Kiev airport "Chaika". Quite, I must say, the aircraft turned out. But who?

But does the reader not feel that even the release of such a "mammoth" is not characteristic of Ukraine? Well, it can not be that Kiev did everything according to the law. Especially considering that the laws there are read strictly in those parts that are necessary for the needs of the country, and more precisely, for the needs of the rulers.

And it appears correctly! Well, Ukraine would not be Ukraine if it had not stolen something and somewhere. Oh, sorry, not borrowed. Well, sort of a loan. Take, and then restructure, according to our own laws. We are there, in the Rada, what you want to take the law. If needed.

So here. A copy of the American helicopter is not licensed! What for? He is not Bell, he is "LION". Well, look like one to one. So what? The name is different. Yes, and with the engines ...

Nobody talks about their production. So where are the engines, Panov? If these lions let out, then the motors should be. And this is doubtful. More precisely, it is doubtful that in Ukraine after a quarter of a century of independence they remain at least in warehouses. They can also be sold! And, therefore, they have been sold for a long time. Though for scrap, but for real money.

It seems to me that the engines of the Panamanians of Ukraine will “drive” the Polish pans. Why? Yes, everything is simple. In the early 60s, Poland produced licensed engines of this particular brand. And then even modernized them. And, unlike Ukraine, she kept some of them in her warehouses. And then everything is clear. In the same way as Soviet armored vehicles and Tanks, engines migrated to Ukraine.

I do not want to mock Ukraine at all. There is no need. They can do it quite professionally. I just showed the level of degradation of the country, which once had a great school of aircraft designers, excellent aircraft factories and intelligent workers, technicians and engineers in the industry.

By the way, the Ukrainian government is developing documents on the sale of the shares of the Antonov concern to foreigners. In addition to Russian, of course. But about this, if something is still decided, later. In the meantime, fear the new "Lion" all over Russia!