"Omsktransmash": the victory of the workforce or the search for a new "death" of the enterprise?

October 6 2015
59
To be honest, I didn’t want to write this material. Not because it is not interesting. And because I wanted to hope for the common sense of the leadership of the plant and the industry as a whole. Especially in the light of current political events and prospects for their development. 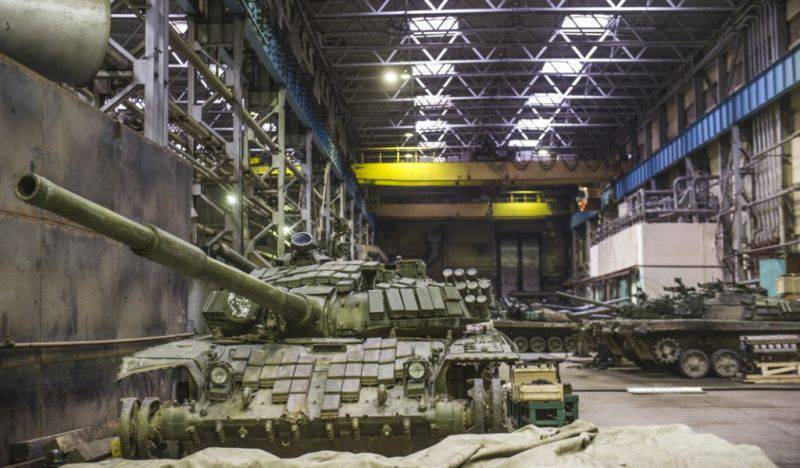 For those who are not familiar with this company, I will give a brief excursion into history. Omsk Transport Engineering Plant, until 2014 the Design Bureau of Transport Engineering, appeared in Omsk in 1942 after evacuating from Leningrad the Leningrad State Plant No. 174 named after Voroshilov. From 1942 to 1946 factory released 6900 tanks T-34.

Since 1958, the plant has become an independent enterprise. The company, which made a significant contribution to the creation of military equipment for the Armed Forces of the USSR and Russia. I think it will be fair to say about the contribution (at least in the past, it is clear that modern samples will not be included in the list yet) of the plant. And not only to understand the size of the enterprise, but also to say thanks to the factory workers for their work.

I will not particularly paint, just list the products:

However, the most famous developments of the Omsk plant now are the famous TOZs "Buratino" and "Sunlight".

What could happen at such a powerful enterprise? Where did the topic of the article come from?

And the following happened. The plant, which today belongs almost entirely to Uralvagonzavod, is on the verge of destruction. Not virtual, but quite tangible. And the reason is banal. A lack of money.

In the summer of this year, the company management announced the upcoming reduction. The reason was the lack of demand for civilian products. The case is ordinary: military production is declining, civilian increases. But there come times when product sales become problematic.

And then I will write an unexpected phrase for many. Glory to the unions! Yes, you are not mistaken. It is the trade unions, more precisely the trade union. Interregional trade union "Workers' Association". It was this trade union that defended the workers by breast. And there were as many as 454 people, almost 58% of the foundry companies.

17 July, the union announced a problem. Began to prepare documents, attract the media, lawyers. In short, it was not a PR action. It was a preparation for battle.

And they won! Won the fiercest fight. Who knows what an Italian strike is? That is what was carried out at Omsktransmash. Production workers will understand me. It is difficult to work if you have to follow ALL instructions and laws. Almost impossible.

In addition, at the meetings in the workshops, plant workers expressed their determination to go to the end. Imagine not to bow your head and leave, but stand, no matter what. Nobody had expected such enthusiasm and such determination. But it was.

September 28 plant administration issued an order to cancel the reduction. "Of their own accord" left 70 people. The rest stay and work. Salary today at the enterprise from 16 to 38 thousand rubles, depending on the duties and job profile. Became more convenient and work schedule.

On this, it seems, and could be finished. Fanfare sound, people rejoice. The enemy is defeated. Justice prevailed. Let the share of media in this story was quite small, but it was.

However, the victory may in reality be Pyrrhic. As a deathbed improvement in a hopelessly ill person. When our grandfathers defeated Germany and its allies, they did the most important thing. They turned the neck of fascism. But the victory of the work collective "Omsktransmash" alas, but the head of the root cause of the events did not turn. Financial problems remained.

The company can not pay with suppliers for work performed and delivery. Claims in arbitration courts are a continuous stream. And the claims, I must say, reasonable. In total, since the beginning of 2015, according to the data from the filing cabinet of arbitration cases, a claim was filed against the Omsk defense enterprise, the total amount of claims for which amounted to almost 24 million rubles.

It is clear that the leadership is trying to get out of the situation. Arbitration courts are coming. Lawyers work. Only here is alarming. A state enterprise, an enterprise that is a monopolist in certain types of military products, has no right to be bankrupt. Has no right to be unprofitable. And it seems to me that not only the labor collective, trade unions, the administration of the plant, but also the leaders of the country should think about it. Deputy Prime Minister Dmitry Rogozin repeatedly visited Omsk. And the situation should know. And he must take the financial situation under his tight control.

In the meantime, I’ll finish with a quote from SuperOmsk, more precisely, from the response to this portal from the head of Omsktransmash.

“Currently Omsktransmash JSC has concluded state contracts for the repair and supply of military products and is provided with stable, uninterrupted work on 2015-2016. The announced procurement procedures are carried out in compliance with the requirements of the legislation of the Russian Federation and will be executed by Omsktransmash JSC in accordance with the terms of the concluded contracts.

Ctrl Enter
Noticed oshЫbku Highlight text and press. Ctrl + Enter
We are
Washington's fleets-pawns in the APR and Europe will be armed with long-range "6-Standards": the threat to the Russian and Chinese Navy doublesFor the country - “well done”, for the enemy - “scalpel”
Military Reviewin Yandex News
Military Reviewin Google News
59 comments
Information
Dear reader, to leave comments on the publication, you must to register.