October 5 2015
43
The last day of September was remembered by the mass Newsrelating to the armed conflict in Syria. The official authorities of this Middle East state turned to Russia for military help, President Vladimir Putin received permission from the Federation Council to use the armed forces abroad, and by evening Russian planes began to carry out combat missions in Syria. All these events occurred in less than one day.


According to official figures, Russia sent to Syria aviation aerospace forces grouping. For some time, Russian planes will strike at targets of terrorist organizations, primarily the Islamic State, which is banned in our country. According to the announced plans, Russian participation in the war on terrorism will be limited to air strikes, etc. actions. The sending of the land contingent and participation in the ground operation is not planned.

October 1 Russian military department announced the first information about the quantitative and qualitative composition of the group of videoconferencing. The official representative of the Ministry of Defense, Major General Igor Konashenkov, said that more than 50 planes and helicopters of several types had been deployed to Syria. From other statements by the general, it follows that the grouping included Su-24M and Su-34 front-line bombers, as well as Su-25 attack aircraft. All these vehicles have already taken part in the combat work and made several dozen sorties to strike enemy targets. 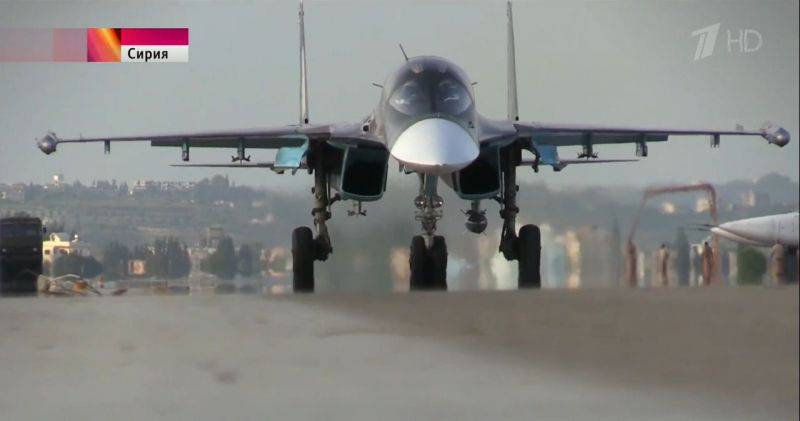 Su-34 bomber landed. Shot from the report of the First Channel

The exact number of various airplanes and helicopters has not yet been officially specified. However, thanks to foreign specialists, the general public has already been able to obtain some information about the grouping of Russian videoconferencing systems in Syria. Apparently, an agreement on direct military assistance was reached by Moscow and Damascus a few weeks ago, which resulted in the transfer of aircraft and auxiliary equipment.

A few weeks ago, the first satellite photographs of the Syrian International Airport named after Gorkiy appeared on foreign specialized resources. Basil Al-Assad (also the name “Khmeimim airbase” appears), on which Russian planes and helicopters were captured. In addition, there were some other reports of the appearance of Russian aircraft in Syrian airspace. So, another 10 of September, the American television channel Fox News reported that several An-124 Ruslan military transport aircraft were seen in Syria. Apparently, these cars brought some equipment to the Middle Eastern country.

The September Aviationist edition 20 published a satellite photograph dated the previous day. The reconnaissance satellite, taking off the airport near Latakia, captured four Su-30CM multi-purpose fighter jets. This message has caused a strong reaction of the domestic and foreign public. For the first time during the armed conflict, modern Russian aircraft were spotted on the territory of Syria. In addition, during the discussion of information about the Su-30CM at the airport B. Al-Assad airport, for the first time there were speculations about the future participation of Russia in the battles.

In the future, new pictures of the airport were published, but the number of Su-30CM fighters did not change over time. Probably, only four such vehicles were deployed, which should now be responsible for intercepting various air targets and, possibly, participating in strikes against ground targets. 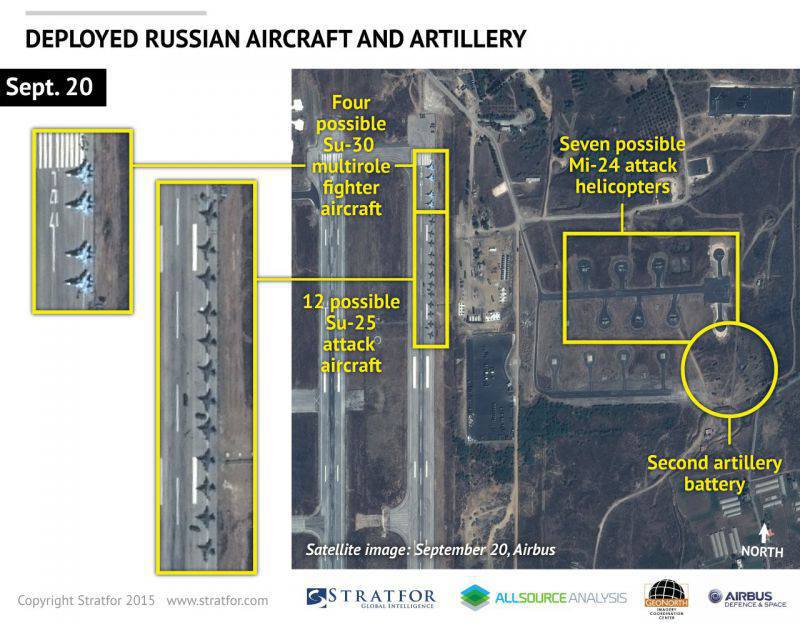 Satellite image of Khmeimim base from 20 September

Also, September 20 appeared a video of the flight of several aircraft. In the captured vehicles identified the Il-76 transport aircraft (or the Il-78 tanker) and the Su-24 front-line bombers. The number of these machines until a certain time was unclear.

Following the front bombers in Syria, the Su-25 attack aircraft were spotted. On satellite images from Allsource Analysis from 20 and September 23, one could see up to Russian-made 12 attack aircraft. In addition, on September 23 there were four Su-30CM and four Su-24, as well as one military transport Il-76 on the airfield.

Comparing the photographs of different days, one can notice that the personnel of the aviation group took some measures aimed at obstructing reconnaissance. So, on the photos of different days, the position of certain airplanes at the aerodrome is changing, which to a certain extent makes it difficult to determine the exact amount of equipment.

Also, 20 of September at one of the sites of the B.Al-Asad airport was seen before 12 helicopters, covered with camouflage nets. Foreign specialists identified Mi-24 or Mi-35 type vehicles in them. A more precise definition of the type of combat helicopters is made difficult by the poor quality of the images, the presence of camouflage nets, and the slight external differences between the two machines. 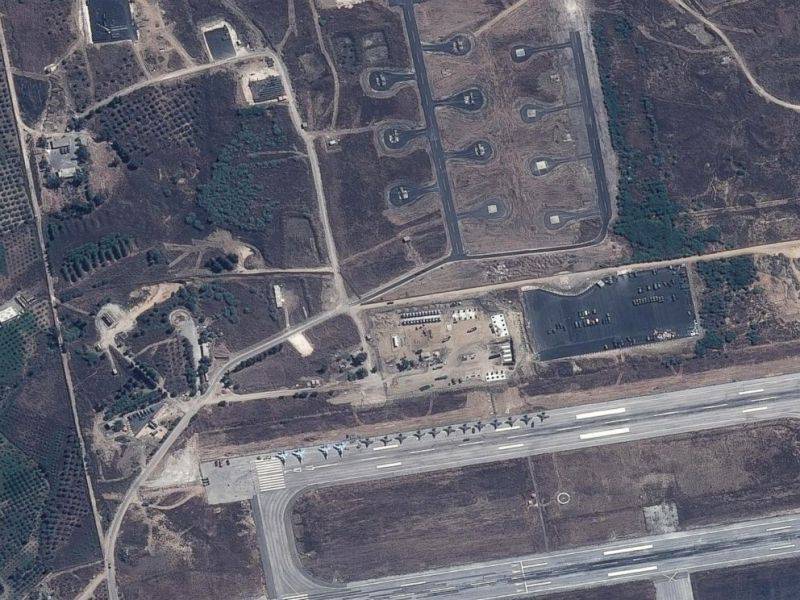 General view of the airfield, September 20

It is noteworthy that in some communications from September 20, the total number of Su-24M bombers at the level of 12 units was indicated. However, for the first time, cars of this type were photographed only a few days later in a slightly smaller number. Perhaps the satellite with photographic equipment could not take a photo at the right time, because of which information about the whole squadron of bombers had not been confirmed before a certain time.

September 21 TV channel ABC News, citing a source at the Pentagon reported that not only military, but also transport helicopters arrived in Syria. According to these data, several Mi-17 helicopters are used to perform transportation tasks, and the total number of helicopter groups has reached 15 units. The proportions of various types of technology remain unknown.

After more than a week after the first reports of Russian aircraft in Syria, information appeared about the additional transfer of aircraft. September 29 appeared photos, which were depicted Su-34 front-line bombers in flight and during landing. It was alleged that the pictures were taken near the city of Latakia, i.e. in close proximity to the Hmeimim airbase. 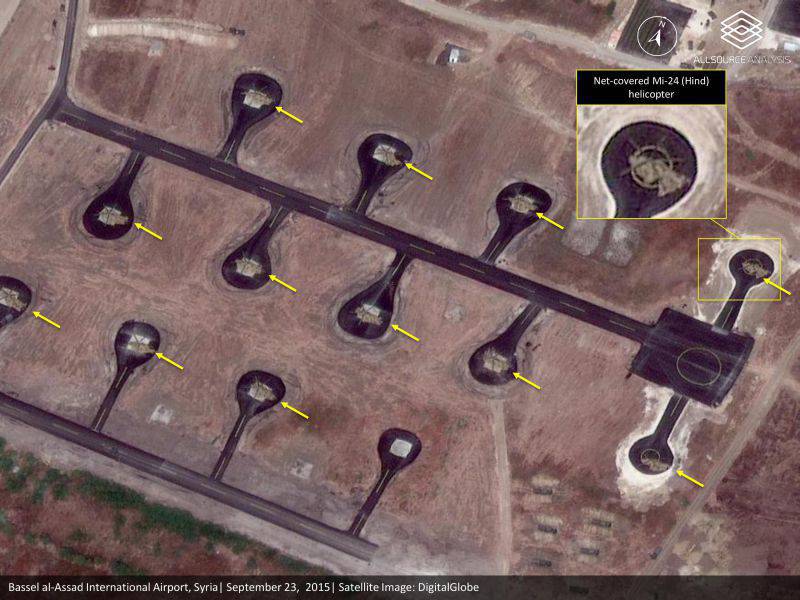 Some foreign sources mentioned that the IL-20 electronic reconnaissance aircraft entered the Russian aviation group. However, this information was submitted with links to unnamed sources and has not yet received confirmation. Satellite photos with this aircraft have not yet appeared, but the use of such equipment in the existing situation may be justified.

September 30, having received the order, the Russian strike aircraft took to the air to destroy enemy targets. According to the Russian Ministry of Defense, on the first day of the operation, our planes carried out about two dozen strikes against eight targets in different regions of Syria. It was reported on the successful destruction of targets, including command posts, ammunition depots and other objects belonging to terrorists.

For the first time in domestic practice, the Ministry of Defense began to publish not only brief press releases with general information about the conducted sorties, but also videos of strikes and destruction of targets. For example, by the evening of September 30, the general public was shown the process of destroying one of the enemy targets. Subsequently, the publication of such recordings continued, with the 1 and 2 of October, the military sharing the shooting of the night attacks. 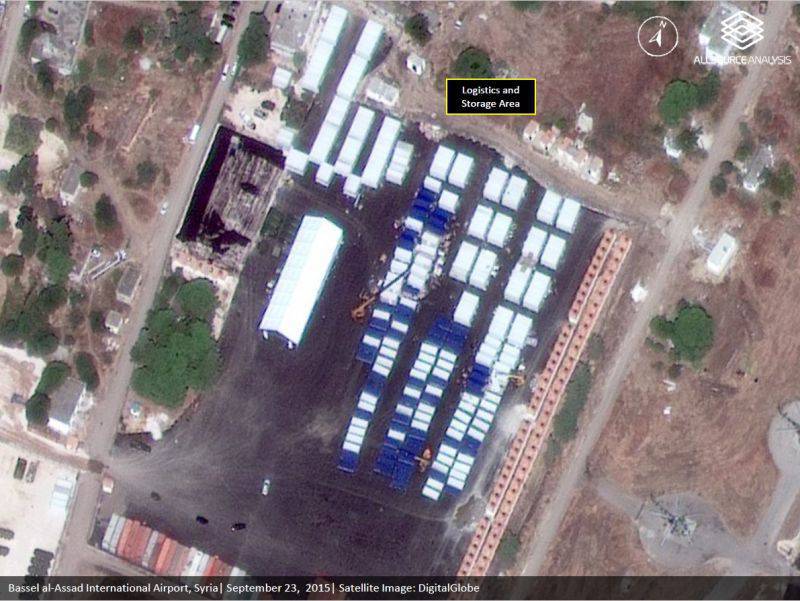 The fact of the appearance of video materials demonstrating the combat work of Russian attack aircraft is a reason for several conclusions at once. First of all, he says that the Russian Aerospace Forces now have the ability to directly monitor the situation and control the results of strikes with the help of unmanned aerial vehicles. In addition, it turns out that the aviation group in Syria has not only combat aircraft and helicopters, but also reconnaissance UAVs. However, the number and types of this technique remain unknown.

For obvious reasons, for the normal operation of combat aviation, not only an airfield is required, but also appropriate support equipment. The published satellite images show that barracks, warehouses, a household complex, etc. were deployed at the Syrian airport. Thus, a small base appeared on the territory of a friendly state, suitable for solving tasks.

Also, satellites “noticed” various land weapons and military equipment. Some objects in the images were identified as artillery, armored personnel carriers and Tanks. In addition, at the airport. B. Al-Assad there is a large number of automotive vehicles of various types.

Published by this time, data allow us to make an approximate list of Russian aircraft, carrying service on the Syrian base Hmeymim. These are four Su-30CM fighters, Su-12M bombers on 24 and Su-25CM attack aircraft, as well as Su-6 bombers 34. In addition, about one and a half dozen helicopters of several types have been deployed to Syria, a number of UAVs, etc. 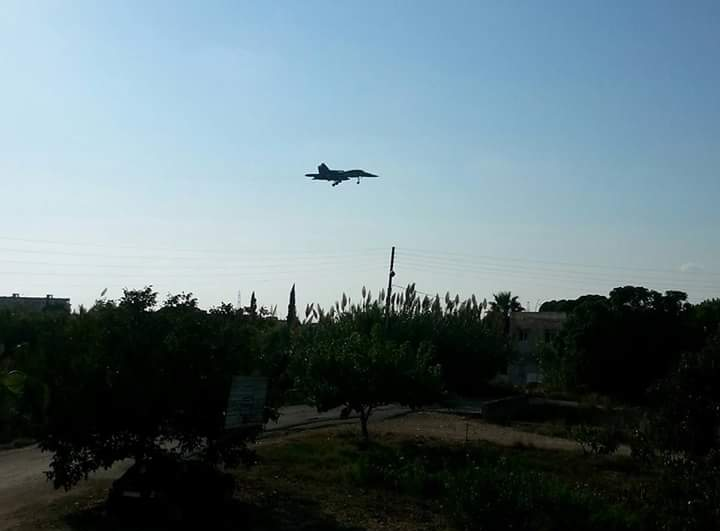 The existing composition of the aviation group of the Russian Aerospace Forces speaks directly about its goals and objectives. Russian pilots will have to first attack ground objects of terrorists. In addition, what is called, just in case, several multi-purpose fighters were introduced into the group. If necessary, they will be able to protect attack aircraft and helicopters.

The composition of the Aerospace Forces grouping deployed to Syria, as well as the results of the first sorties, allow us to look into the future with restrained optimism. Russian front-line aviation pilots have already shown that they are capable of solving assigned tasks and delivering accurate strikes at enemy targets. In the near future, combat aviation will continue. Thus, the Russian military will take the most active part in the fight against terrorist organizations, as well as get the most important work experience in a real conflict.

Video recordings of attacks on the positions of terrorists on the official youtube channel of the Ministry of Defense:
https://youtube.com/playlist?list=PLtqIS4Gj9IdFcxQT2hTgkuG3tHMRxFq2L