25 September 2015
13
In September 1957, the Soviet Union adopted a program of assistance and development of the Chinese armed forces. To reinforce the Chinese Air Force, the Soviet side handed over several medium strategic bombers Tu-16. At the same time, the increase in friction between the USSR and China at the end of 1950-s put many joint projects at risk, the supply of celestial aircraft to the Middle Kingdom was stopped and the Chinese industry was forced to independently develop hulls and engines for them at the Xian Aircraft Company and Xian Aero plants -Engine Corporation. For the first time, the H-6 I Badger fully assembled in China, I Badger took to the skies in December 1968. Since then, a huge number of different variants of this aircraft have been created, which are still outwardly indistinguishable from the base Tu-16.


Currently, a copy of the Soviet Tu-16 jet bomber, which made its first flight in 1968, remains in service with the PLA Air Force. These aircraft are used in the far aviation China as a carrier of nuclear weapons. Aircraft Xian H-6 can be safely attributed to long-lived aircraft, which in Russia, for example, is the famous Tu-95.

The development of its own analogue of the Tu-16 Xian designers began approximately in 1964 year. The model received the designation H-6A. The new jet bomber of the Chinese assembly was a slightly modified version of the previously delivered China Soviet Tu-16, which were based on components made in China. Due to the impossibility of acquiring Soviet parts and engines, the PRC was forced to launch its own production of turbojet engines, which received the designation Xian WP8. These aircraft engines were an analogue of the Soviet RD-3M engines, which were installed on the original Tu-16. The situation was the same with other Xian H-6 units and aggregates. 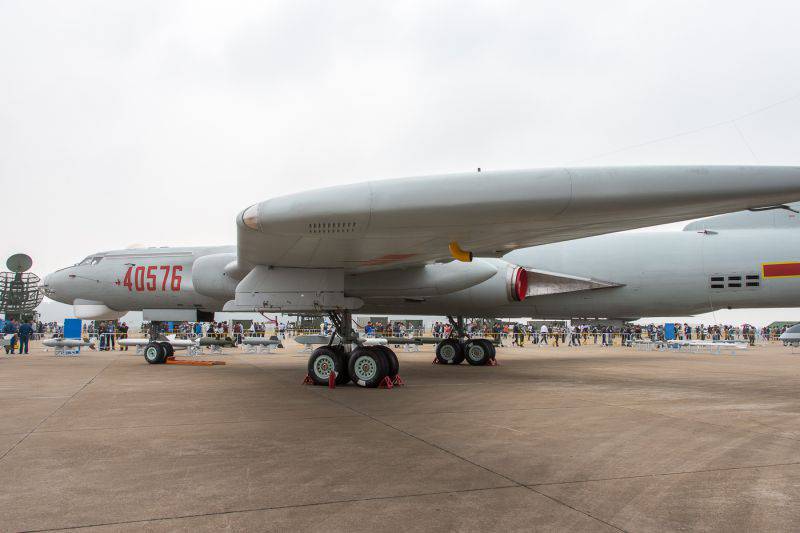 After at the end of 1968, the first H-6А, built entirely from Chinese components, rose into the sky, the mass production of this version of the bombers began. At the same time, there is no official data on the production of this aircraft in the PRC. According to various estimates, Xian companies were able to build from 1970 to 150 aircraft of this type until the middle or the end of 200-s. In the future, most of the built aircraft on a regular basis underwent modernization and has been successfully used by the Chinese Air Force to this day.

Due to its specific "origin", this Chinese bomber was almost no different from its Soviet prototype in its main characteristics. The maximum take-off mass of the bomber reached 75,8 tons, and the fuel tanks, located in the wing and fuselage, interfered to 33 tons of aviation kerosene. The bomber combat radius was 1800 km. The crew of the model Xian H-6A consisted of 6 people. For self-defense on a jet bomber there was an impressive artillery armament, which consisted of 7 automatic guns caliber 23-mm (three paired). The twin gun mounts mounted on remote-controlled turrets were located in the tail of the aircraft, as well as on the upper and lower parts of the fuselage. Moreover, on the nose of the plane had another course 23-mm gun. The first Chinese aircraft modifications were carriers only of bomb weapons. At the same time, the maximum bomb load did not exceed 9 tons. Initially, the main weapon of Xian H-6 was free-fall conventional bombs, the aircraft became the carrier of nuclear weapons later.

The similarity of the characteristics of the Chinese Xian H-6 with the parameters of the Soviet Tu-16 bomber was due to their almost identical technical appearance. So the Chinese bomber had a large lengthening fuselage with two crew cabins (nose and tail), fuel tanks, a cargo compartment and a compartment for various equipment. On the sides of the fuselage were two nacelles, characterized by a curved shape, their shape was due to the design features of the machine. The Xian H-6 bomber received a swept wing with smooth chassis curlers located on the center section. In the tail of the machine was located a large keel, it was the stabilizer. 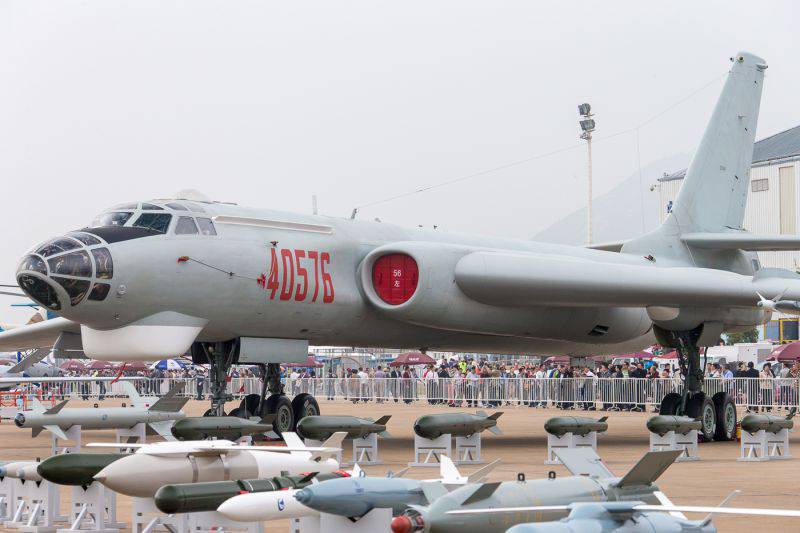 For its years, the Xian H-6A aircraft was characterized by a rather large range (especially by Chinese standards), which, combined with the possibility of using nuclear weapons, allowed the PLA command to give the aircraft the status of a strategic bomber. Appearances in the nomenclature of his weapons of guided missiles, only contributed to the preservation of this classification of the bomber and allowed to finalize the strategy for further combat use of the machine. Immediately after the production of the H-6A version in China began, they began work on its modifications. For example, the aircraft H-6В instead of bomb weapons carried various aerial photographic equipment for conducting reconnaissance shooting. The modification of the H-6C bomber was nothing more than the base plane H-6A, but with advanced radio-electronic equipment (modern EW technology with enhanced characteristics was introduced on the plane). There were also options for upgrading the aircraft with the letter designation from D to M. For example, the carrier of strategic cruise missiles was the Xian H-6M bomber. This aircraft was distinguished by the presence of suspension points under the 4 wing, there were no bomb bombs on it. Information appeared in the press about the resumption of production of this version of the aircraft from the beginning of 2006.

The latest version of the classic H-6 bomber is the Xian H-6K. This version is distinguished by new Russian-made D-30KP-2 turbojet engines, each with an 118 kN each, a modernized cockpit, increased air intakes and an increased radar radome antenna, and no 23-mm defensive cannons. The combat load of this model was brought to 12 000 kg. In this case, the bomber was able to carry up to 6 cruise missiles such as CJ-10A, which are copies of the Russian X-55 missile. We managed to increase our combat range from 1800 to 3000 km. The first flight of the bomber of this modification made 5 January 2007 year. The Chinese Air Force adopted the aircraft in 2011 year. On this model, the internal bomb bay is completely absent, and additional reserves of fuel and EW equipment were located in the vacated space of the hull.

Unlike some of its predecessors, the H-6K version was not rebuilt from old aircraft, but was manufactured at the factory from scratch. Taking into account the service life of the current bombers, the H-6K aircraft have every chance of remaining in service with the Chinese Air Force until the 2052 year. That year marks exactly 100 years from the moment the original Soviet bomber Tu-16 made its first flight. 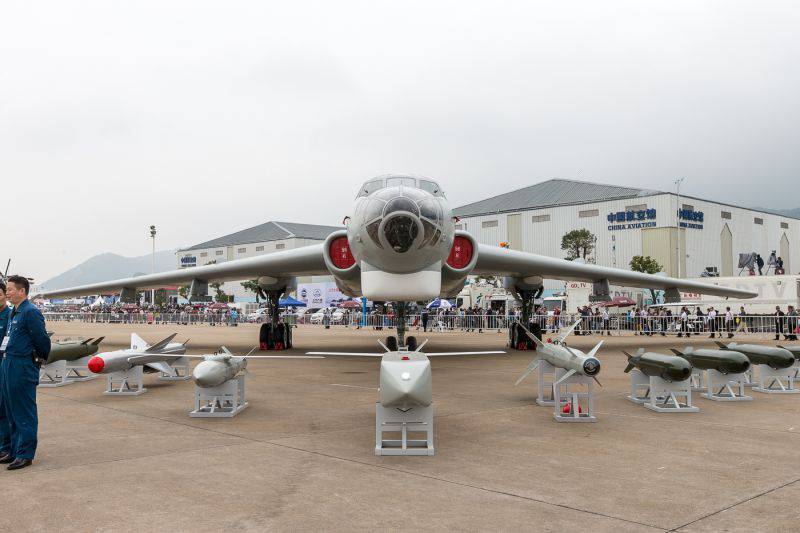 Up to a certain point, all the Xian H-6 Chinese bombers did not have significant nuclear deterrence capabilities. First, the lack of stealth flight and subsonic speed will not allow the bomber to break through the air defense systems of the United States, Japan and Russia. Secondly, before 2006, China simply did not have in service weapons of long-range cruise missiles that could be used for practical operations. For example, the main weapon of the H-6Н aircraft was the YJ63 cruise missiles, whose flight range hardly exceeded 200 km. The deployment of aircraft with these missiles as part of the 10-th PLA Air Force bomber squadron was aimed only at strengthening the capabilities of attacking tactical targets located in Taiwan.

At the same time, the most modern version of the Xian H-6K bomber as an aviation strategic nuclear deterrent can help the PRC to achieve much more. The combat load and range of this model increased significantly due to the use of new engines with greater traction power. In addition, the bomber acquired a reinforced fuselage design with extensive use of modern and lighter composite materials. Knots outdoor suspension also got a new design. The composition of the onboard radio-electronic equipment of Chinese design, including the radar, has changed. The Xian H-6K received new long-range cruise missiles and, although the car remained subsonic, it already has significantly increased combat capabilities.

The appearance on the stage of a new version of the H6 aircraft and a new generation of long-range cruise missiles became the most important event for the Chinese Air Force. The Chinese counterpart of the Russian X-55 rocket, when launched from PRC airspace to carry out conventional offensive operations with high accuracy, has a strike radius covering the entire Korean Peninsula, Okinawa Island, partly Honshu Island, and fully Shikoku and Kyushu Islands in Japan. In the event that this cruise missile has a hit radius that is equivalent to the hit radius of the original Russian X-55 missile and is 2500 km, then the Xian H-6K bombers rising from airfields located in northeastern China are directly strike at targets in Tokyo, on the islands of Hokkaido and Honshu. In addition, such bombers deployed as part of the 8-th bomber squadron of the Chinese Air Force in the military district of the city of Guangzhou, are able to launch air strikes on the American island of Guam. And thanks to the increased flight range of missiles and aircraft and targets in the territory of Alaska. 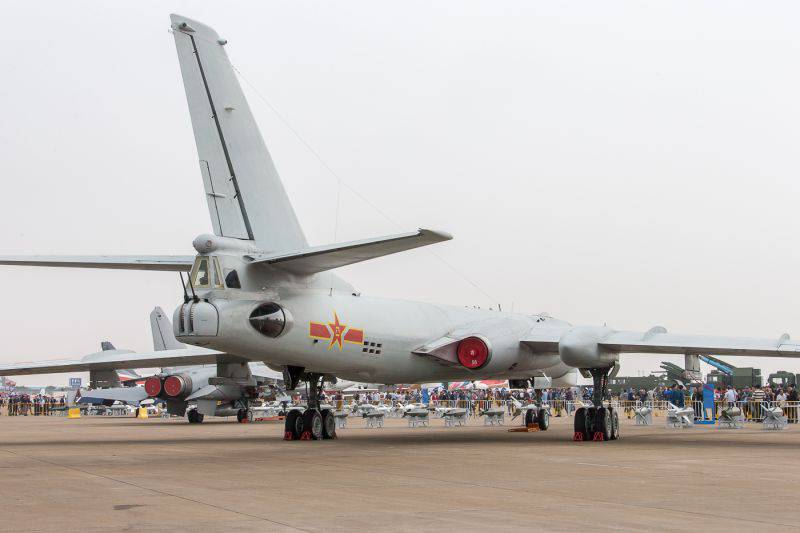 The upgraded version of the Xian H-6K is able to launch CJ-10A cruise missiles weighing about two tons and a range of damage of approximately 2-2,5 thousands of kilometers. These missiles are able to develop in flight speed at the level of 2500 km / h. Theoretically, such an aircraft with these missiles on board is able to strike at Moscow without entering the zone of the Russian air defense system. A bomber can launch cruise missiles over the territory of other states, and then return to base. 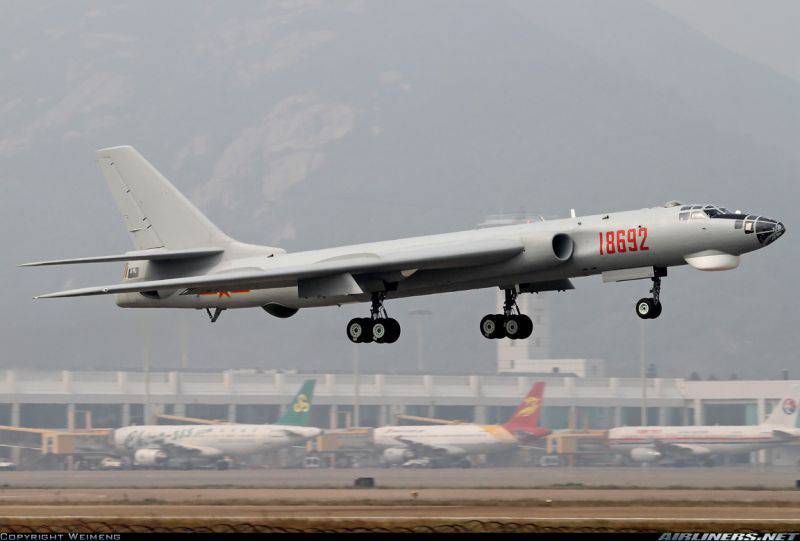