25 September 2015
63
To solve some problems in the conditions of a military conflict, the army requires not only military, but also special engineering equipment. At the same time, such machines must have the necessary protection, allowing them to work in difficult conditions without risking the crew. At the recent exhibition Russia Arms Expo 2015 a new format of such equipment was presented, which is able to interest the domestic and foreign military. Chelyabinsk Tractor Plant (ChTZ-Uraltrak) showed a prototype model of a promising protected bulldozer БХNUMXМ10СЗ-Е2.5000Н, adapted for work in difficult conditions.


Chelyabinsk Tractor Plant, part of the corporation "Uralvagonzavod", is engaged in the construction of tractors, bulldozers and other special equipment of various classes. In the near future, the range of mass-produced equipment can be supplemented with a new engineering vehicle for the armed forces. The B10М2.5000СЗ-Е1Н protected bulldozer was developed on the basis of the B10М2 serial and differs from it in a number of new design elements. Due to the redesigned hull, allegedly, it was possible to protect the driver-operator from bullets and shell fragments.

Presented in Nizhny Tagil machine is a full-scale layout, suitable for use in various tests. For a number of specific reasons, this bulldozer received a new hull, made of non-armored steel. Thus, the existing prototype machine B10М2.5000СЗ-Е1Н does not have the serious protection provided by the project, however, it can be used in tests and show its capabilities. Naturally, in the case of receiving an order, CTZ will begin assembling armored steel hulls. 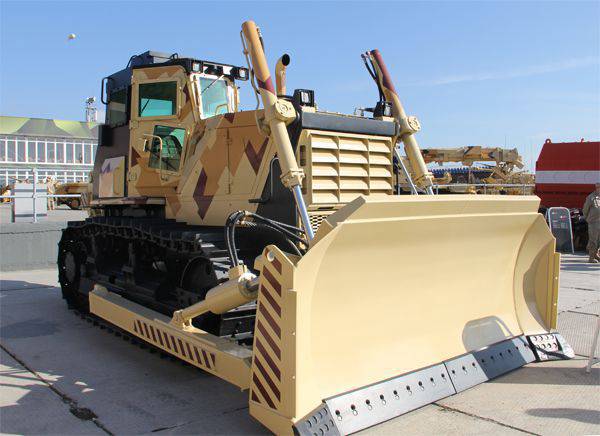 General view of the bulldozer БХNUMXМ10СЗ-Е2.5000Н

The B10М2 traction class 10 bulldozer became the basis for a promising engineering machine. The B10М2 bulldozer is built on the basis of the Т10М2 crawler tractor. This machine is offered in several versions, differing in the type of power plant, as well as some other units. At the request of the customer, the base bulldozer can be equipped with various equipment designed to solve various tasks.

With an engine tractor power 180 or 190 hp Hydromechanical transmission mates with a three-wheel single-stage torque converter and a three-speed planetary reversing gearbox. The chassis is equipped with six track rollers on each side, combined into one carriage with a three-point suspension. With the base 2,88 m and the width of the caterpillar 0,5 m, the specific pressure of the base tractor Т10М2 is at the level of 0,055 MPa.

Depending on the composition of the special equipment, the length of the БХNUMXМ10 bulldozer can exceed 2 m, the width of the tracks - 6,6 m, height - more than 2,3 m. The weight of the machine depends on the model and set of attachments. Usually this parameter exceeds 3,4-16 t.

In the basic configuration, the Chelyabinsk bulldozer is equipped with a relatively light unprotected case, which protects the units and the operator from external influences. For the convenience of the operator, the cabin is equipped with double glazed windows, a heater / fan, a sprung adjustable seat, sun blinds and other equipment. In addition, an ergonomic dashboard and convenient controls for the machine and special equipment are provided.

Since the B10М2.5000СЗ-Е1Н bulldozer should work in combat conditions, ChTZ specialists developed a new armored corps, designed to protect the operator and the machine’s units from firing from small weapons and detonation of explosive devices. In fact, the native body of the tractor / bulldozer is completely dismantled and instead it is proposed to install new units made of armored steel and bulletproof glass.

Protection of the original design is installed on all major components of the bulldozer. The power plant, the cabin and the frame of the machine are covered with armor plates or laminated glass. The engine and part of the transmission units located next to it are protected by a rectangular armored casing made of several main parts. Instead of a frontal sheet, a two-part grid for cooling the engine is used. The upper part is made in the form of unregulated blinds, the bottom - a metal grid.

The engine has vertical side plates with a sloping rear end. Due to the narrowing of the engine casing in the rear, the side service hatches have two lids of complex shape. One of these covers is attached to a vertical sheet, the second is located in an inclined cutout. On top of the engine is protected by a flat sheet, located with a slight slope on the nose. 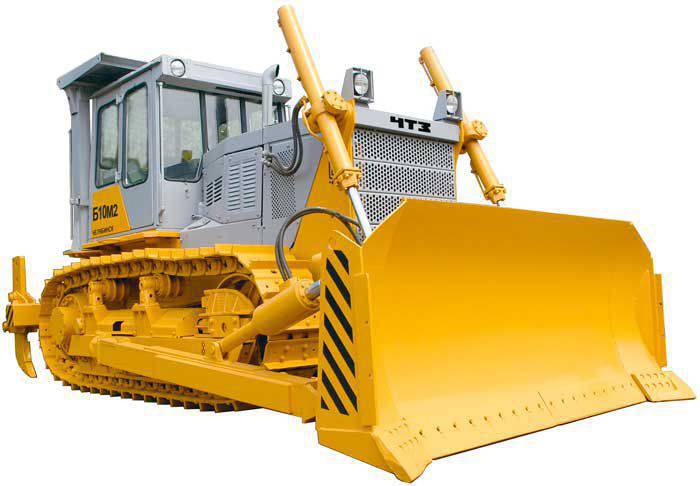 In the new project of the armored bulldozer БХNUMXМ10СЗЗ-Е2.5000Н a serious redesign of the operator’s cabin design was proposed. To ensure the required level of protection while maintaining an acceptable weight, it was decided to abandon the rectangular design, introducing several oblique panels. In particular, because of this, instead of a large vertical windshield, the operator has a relatively small window installed at an inclination directly behind the bonnet. Above the window are two headlights designed to illuminate the working area.

The new cabin received large sloping zygomatic sheets, also performing the functions of side doors. The operator can get into the cab on the right and on the left. In this case, the hinges are located in the rear of the door, because of what they open by turning sideways-back. To improve visibility at the top of the door there is a rectangular window. Another glass of the same shape is inclined at the front lower edge of the door. To a certain extent, the lower glasses compensate for the absence of a full-fledged glazing used on the base dozer.

Behind the doors are vertical sides with windows. Aft cabin is made of several sheets: vertical upper and lower, as well as an inclined middle. A window with a wiper is provided in the top sheet. Also installed on it the second pair of headlights. The specific design of the aft cabin, apparently, is associated with the need to reduce the weight of the structure while ensuring sufficient internal volumes to accommodate all the necessary units.

On the roof of the cabin there is a box-like unit, probably representing a hatch cover. In this case, in some situations, the operator gets the opportunity to get out of the car, even with locked doors.

According to the Chelyabinsk Tractor Plant, the new B10М2.5000СЗ-Е1Н bulldozer will be protected from small arms bullets and artillery shell fragments. However, accurate data on the level of protection is not available. The thickness of the armor and glass has not yet been clarified. Protection from the most common types of small arms will likely be provided.

A sample of a promising engineering machine presented at the recent RAE-2015 exhibition has received bulldozer and ripping equipment. In front of the shown machine B10М2.5000СЗ-Е1Н a hemispherical increased dozer blade of the type "Е1", manufactured by the Chelyabinsk Tractor Plant, was installed. The body of this blade is pivotally connected to two support beams, mounted on the bogies of the chassis of the base tractor. The equipment includes several hydraulic cylinders designed to change the position of the blade. In this case, the blade is lifted and tilted hydraulically, and the cutting angle is adjusted by a screw diagonal.

According to the manufacturer, the “E1” type dump consists of three sections: hemispherical central and curved side. In addition, an additional plate is mounted on the upper edge of the central section, increasing the overall height of the structure. The E1 dozer blade has a width of 3,31 m and a height of 1,5 m. The volume of the drawing prism reaches the 5,85 cube. The total weight of the blade and the equipment connected to it is 2,61 t. 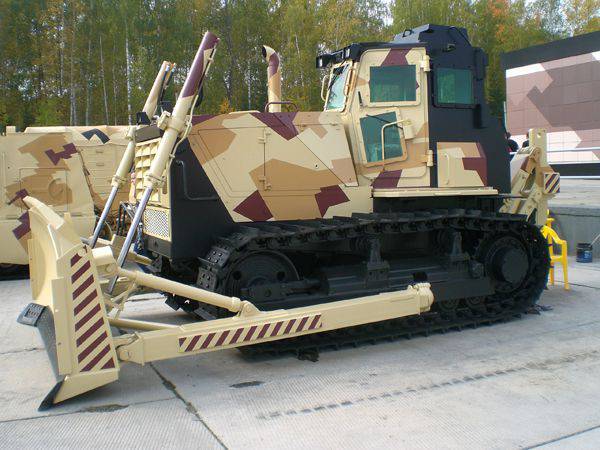 Also, the exhibition protected bulldozer received loosening equipment of type OR10H. A single-tooth device of parallelogram type with hydraulic drives is intended for loosening soils of various categories, including rock-folding. The kit with a total weight of 1,72 t provides loosening of the soil to a depth of 650 mm and has three settings for the depth of loosening.

The base bulldozer БХNUMXМ10 has universal mounts for mounting attachments. For this reason, the B2М10СЗ-Е2.5000Н engineering machine can be equipped not only with a blade and a ripper. Probably, at the request of the customer, such engineering equipment can be produced in other configurations that meet the requirements.

At a recent exhibition, a mockup of an engineering vehicle without armor protection was shown. A full-fledged armored bulldozer of a new model may appear later if any customer shows his interest in such a technique. According to the press service of the CTZ, the proposed bulldozer has already interested the representatives of some foreign countries. In the foreseeable future, this may lead to the appearance of a contract for the supply of production equipment.

It is reported that during the exhibition, representatives of India, Iran, Kazakhstan and other foreign countries were interested in the B10М2.5000СЗ-Е1Н machine. In addition, representatives of the Chelyabinsk Tractor Plant have already held talks with potential customers. With whom exactly the negotiations were conducted, and what questions were discussed on them, it is not specified. They also talked about the interest in the bulldozer shown by potential Russian customers.

At the moment, a promising protected bulldozer for engineering troops B10М2.5000СЗ-Е1Н exists only in the form of a mock-up sample with a full set of attachments, but without armor. Some potential customers have already become interested in such equipment, but, as far as we know, not a single contract for its supply has been signed yet. However, negotiations on the sale of bulldozers may continue in the near future, which will lead to the appearance of appropriate orders.

Ctrl Enter
Noticed a mistake Highlight text and press. Ctrl + Enter
We are
The action “Military service under the contract is your choice!” In Rostov-on-Don: future contract servicemen, exhibitions and “Russian Knights”6-I tank brigade. Technique and training
63 comments
Information
Dear reader, to leave comments on the publication, you must to register.