28 September 2015
11
History these tanks, in general, is interconnected, albeit in a very intricate way. We must begin with the fact that each British tank unit in France had its own repair shop. Lieutenant Colonel Philip Johnson was working in one of these workshops. He began to improve the Whippet tank and managed to increase its speed, and then developed the so-called “cable track”, the difference from the traditional one is that the tracks in it did not connect to each other, but were fixed with gaps on the cable. The cable is rewound between the wheels, and the tracks ... can swing from side to side. Such a caterpillar is lighter; wooden panels can be inserted into the track plates. But then ... if it breaks, then it will not be possible to fix it, because how do you connect the torn metal rope, that is, its ends? 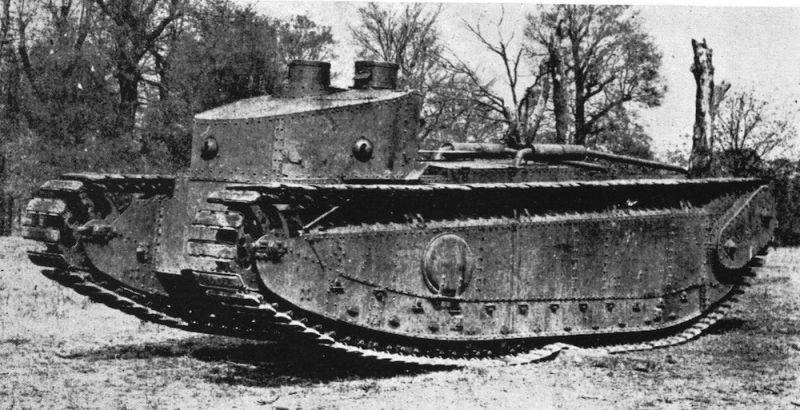 "Medium D" during the test. 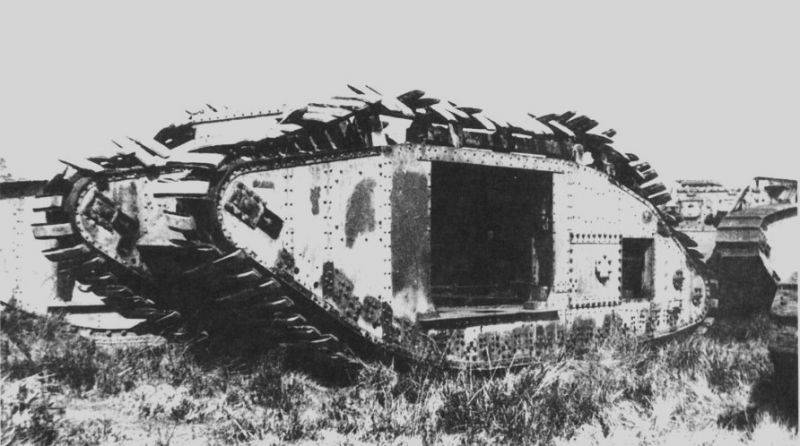 The maximum speed of the modified Mk.V tank with this track increased to 20 miles per hour compared to 4,6 miles on a standard tank. The tank, as an experienced one, was assigned an index D, after which the experiments with the “snake caterpillar” (and they called it so!) Were continued. At the same time, Johnson developed a new and very promising suspension for the tank. And here the “genius of the tank war” F.S. Fuller decided that such a tank was exactly what was needed for his “1919 plan of the year”, which included, first, the continuation of the war in the 1919 year, and secondly, the massive use of speed and amphibious tanks.

Churchill propagated the "middle D" as an important step in the development of the Royal Tank Corps, but then the First World War ended and the expenditures on military equipment began to rapidly decline. Tanks D planned to make 500 in December 1918-th, then 75 in July 1919-th, and it all ended on 20 machines. However, the wooden layout of the medium tank D was shown in Woolwich at the start of 1919. 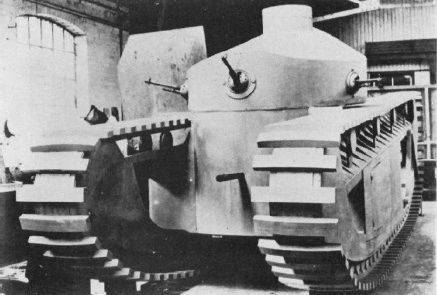 The tank in many ways resembled the "Whippet", deployed backwards! Engine power 240 l. with. it was located behind, and the cabin with four machine guns was in front. This was a response to Whippet’s criticism, which had a poor forward look. The tank could overcome obstacles with a height of 1.22 m when moving forward and 1.83 m when moving in the opposite direction. Patency, of course, was worse than that of diamond-shaped tanks, but the tank had to swim! And to move through the water by rewinding the tracks, which played the role of a kind of paddle blades.

Tank with "back" above the "front"!

Here we have to step back a bit to find out: this was not the first amphibious tank of the Royal Tank Corps, because the Mk.IX tank was the first. To ensure its buoyancy, used empty tanks, fixed on the sides and in the bow of the hull. Side doors were sealed with rubber gaskets, to create excess air pressure inside the body used fur. Movement through the water was carried out by rewinding the tracks, for which special blades were mounted on them. In addition, a high superstructure was installed on the tank hull, in which part of the equipment was located, and exhaust pipes were brought out through its roof. 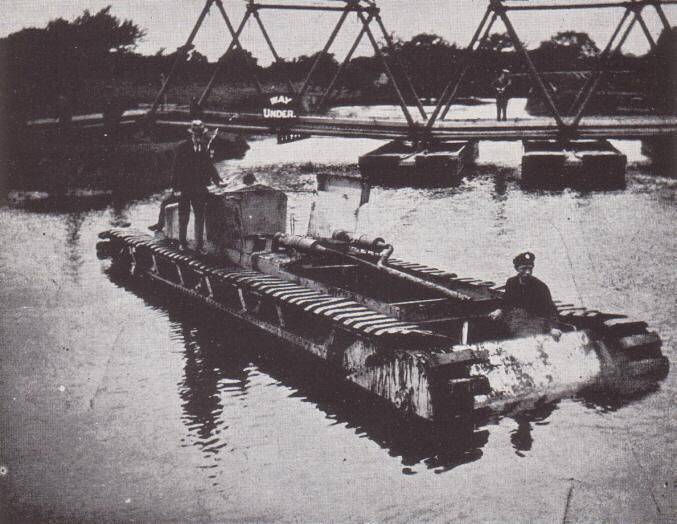 That's how the "average D" sailed.

On testing the floating Mk.IX, called “The Duck” (“Duck”), was released on November 11 of the year 1918. He was forced to swim in the water area of ​​the base at Dolly Hill, and although the tank was very poorly controlled on the water and had a low margin of buoyancy, the tests were considered successful. Such a device of the machine precluded the placement of the landing force inside the hull (and the Mk.IX was just the “landing tank”, the prototype of the modern BTR and BMP) and the installation of powerful weapons on it. In addition, the end of the war in November 1918 did not allow further work in this direction. The only floating Mk.IX was subsequently dismantled for metal, but the experience gained during its testing helped to build more advanced amphibious tanks afterwards. 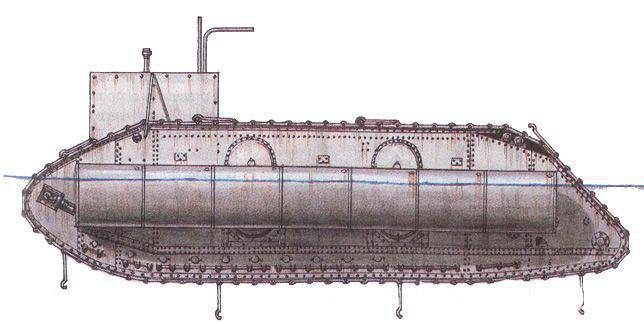 As for the floating tanks D, they were ordered by 11 units for testing, but all of them were made of low carbon steel, that is, not armored steel. There are options for D * and D ** ("with a star" and "with two stars"). With a weight of 13.5, the tank had a speed of 23 miles per hour over flat ground and up to 28 miles per hour downhill. Then two tanks in 1922 were sent to India for testing in the tropics. The tanks had an asbestos layer on the armor to protect against heat in the sun, but both of them broke down while moving from the train station to the military camp, where they were abandoned.


One medium D * was produced by Vickers at the end of 1919 of the year. The hull expanded to increase the displacement, the width of the track also increased. The original three-speed gearbox was replaced by a four-speed gearbox, so that the maximum speed was even slightly higher, 24 miles per hour, although the tank's weight increased to 14,5 tons. But the better the tank did not swim!

The average D ** was also done by Vickers in 1920. The width of the hull was again increased, put the new engine in the 370 hp "Rolls-Royce". The 15-ton tank with it reached its maximum speed in 31 km / h, but it is not known with which engine this speed was reached.

Two DM tanks (“modified” or “upgraded”) were produced in Woolwich's 1921 year. In the fighting compartment, an additional dome was installed on top for the tank commander, but which reduced visibility to the driver even more. The mass of the tank increased to 18 tons, and the maximum speed dropped to 20 km / h. At least one such tank drowned in the Thames, and it had to be lifted, as the famous cinematic Pat-magazine told about 1921 in the year - “He sees everything, knows everything”. 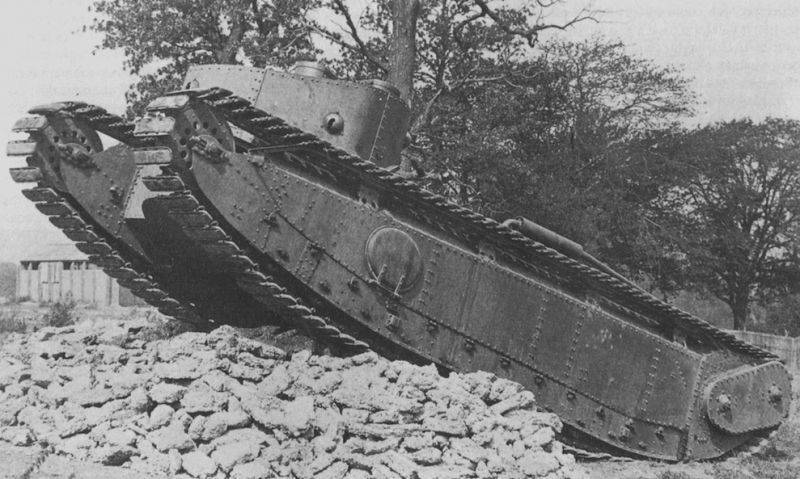 Johnson was also commissioned to develop a family of armored vehicles for use in the colonies. Johnson made a tank based on the "Whippet" with two machine-gun turrets and old tracks, but with its new and also cable suspension. One car was built in Woolwich as a “tropical tank” in the 1922 year. He was tested in Farnborough, but did not receive development. So far, only one tank has been preserved from all this “family” of the first amphibious tanks - the Mk.IX with the hull number IC 15, which is on display at the Royal Tank Museum in Bovington. As a result, Johnson's KB was closed in the 1923 year, and not a single tank of the type “medium D” in England was preserved.

However, the story of "tank D" is not over! Overseas, the specification for the new medium tank was prepared in the same 1919 year. The weight of the tank was to be equal to 18 t, the specific power was determined in 10 l. with. per ton. The maximum speed should have been 12 km / h, and the cruising range of 60 kilometers. The tank should have been equipped with a light cannon and two machine guns, and the thickness of the armor on it should have been able to withstand the hit of 0.50 caliber inches (12,7-mm) from close range. The wooden layout was created in April 1920. With some minor changes, the US Army munitions department (in charge of this project) authorized the construction of two experimental tanks of this type. The first of them was rather ordinary in terms of design, with a spring suspension, and received the designation M1921. But here in the department of ammunition were received drawings and specifications for the "serpentine caterpillar" and the suspension of the tank "average D" from England. Therefore, the second prototype was built with just such a track and suspension and received the designation M1922. 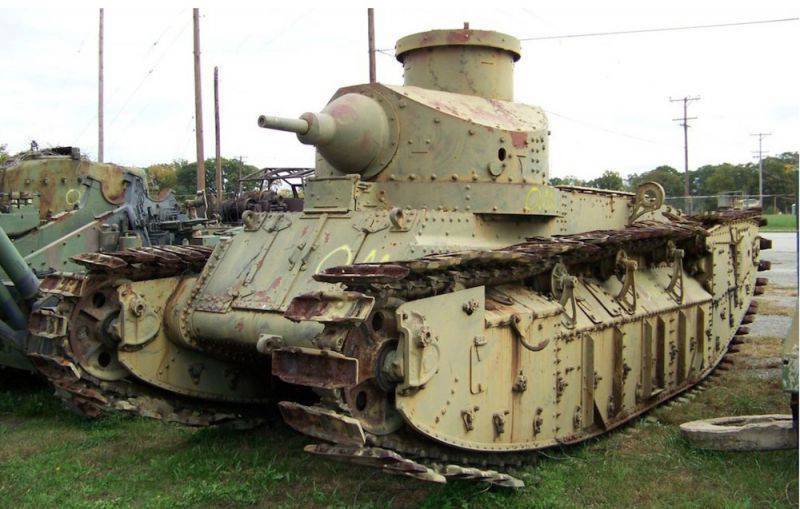 M1922 at the Aberdeen Proving Ground today. The hollow tracks where the wooden plates were to be inserted are clearly visible.

At that time, the US Army had to save literally everything. Therefore, it was out of the question to build many such tanks. They decided to build only to save the experience. As a result, M1921 was built at Rock Island Arsenal and delivered to the Aberdeen Proving Ground in February 1922. It was the engine of Murray and Tregurta power 220 l. with., but really issued only 195! The lack of power limited the speed of M1921 to all 10 miles per hour. 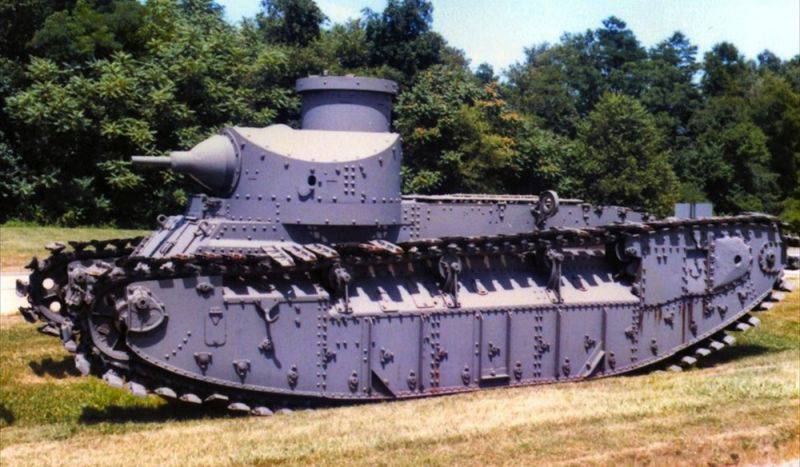 The tank was armed with an 6-pound (57-mm) cannon and an 7,62-mm machine gun in a round turret. Another machine gun could be mounted on its small tower at the top. The M1922 tests were completed in the 1923 year, and it was sent to Aberdeen in March 1923. Tests have shown that the carrying cable wears out very quickly and was replaced with a chain. Interestingly, the tracks of this tank also had wooden inserts. The suspension worked well, and although the tank did not have a powerful engine, it reached a speed of 16 miles per hour. The car was even put into service under the name M1 and ... immediately left in Aberdeen as a museum exhibit. Another tank is in the city of Anniston in Alabama. On this story, similar, like the twin brothers, "tanks D" ended on both sides of the ocean!

Ctrl Enter
Noticed a mistake Highlight text and press. Ctrl + Enter
We are
Heavy tanks of the USSR in the postwar period6-I tank brigade. Technique and training
11 comments
Information
Dear reader, to leave comments on the publication, you must to register.