18 September 2015
19
The Tactical Missile Weapons Corporation (KTRV) continues to modernize the arsenals of the national Air Force. At the same time, the renewal of the product range is carried out both by creating completely new systems and by upgrading existing ones. At the recent exhibition MAKS-2015, the corporation introduced a new tactical guided missile X-58USHKE (TP), which differs from its predecessors in some technical features and combat capabilities.


A new product X-58USHKE (TP) was developed in the GosMKB "Raduga" them. AND I. Bereznyak is another guided rocket of the X-58 family, and is also a direct development of the already well-known project X-XNUMHUSHKE. By preserving some of the existing features and introducing new solutions, it was possible to significantly increase the combat effectiveness of the new weapons. With the help of an updated guidance system, the X-58USHKE (TP) missile can be used not only to attack enemy radar stations, like previous members of the family, but also to destroy other ground targets. 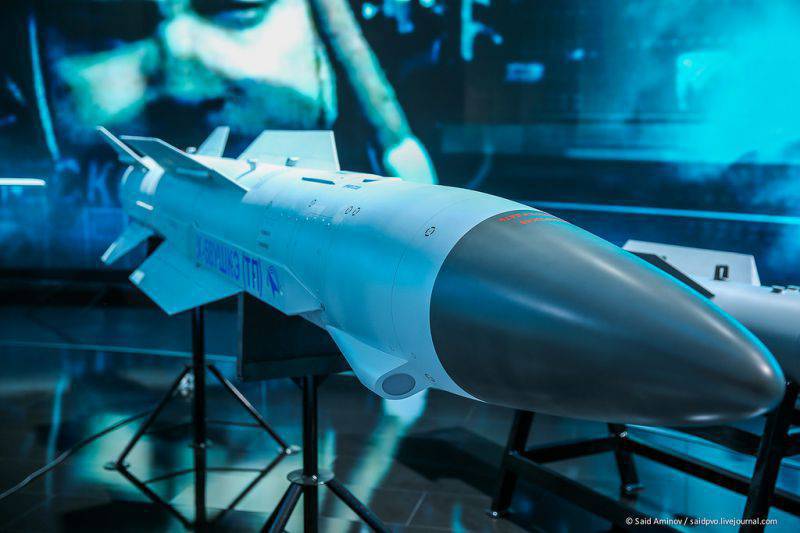 Being a further development of the X-XNUMHUSHKE rocket, the new X-58USHKE (TP) product retained its main features. This is a general layout, size and weight, as well as the design of the wings and tail. Recall that the X-XNUMHUSHKE project was developed taking into account the transportation of missiles both on the external sling and in the internal cargo compartments of promising aircraft. For this reason, this rocket received a folding plane, allowing to reduce the cross-section in the transport position.

The installation of new equipment did not have a noticeable effect on the overall design of the upgraded rocket. It, like the base X-58USHKE, has a cylindrical body of large elongation with a lively head fairing. In the middle part of the body, X-shaped wings are mounted, in the tail - steering wheels of similar design. Trapezoid planes consist of two parts and can be folded to reduce the width of the rocket. In this case, the console upper rudders and wings are lowered sideways, and the lower fold down under the body and overlap each other. Two pairs of full turn steering wheels are used to control the flight.

The X-58USHKE (TP) missile is longer than 4 m and the case diameter is 0,38 m. The wingspan of the spread wings is 0,8 m. With a launch weight of about 650 kg, the product carries a high-explosive fragmentation unit weighing about 150 kg.

The folding wings of the Kh-58UShKE and Kh-58UShKE (TP) missiles can significantly reduce the volume occupied by them. Due to this design feature, such weapons can be transported both on the external load and in the internal compartments of promising aircraft. For transportation and launch of missiles can be used aviation AKU-58 ejection devices for external suspension and internal devices UVKU-50.

The X-XNUMHUSHKE basic rocket is equipped with a solid-fuel engine, which provides acceleration up to a maximum speed of 58 km / h. The maximum flight range is 4200 km. Probably, the upgraded version of the X-245USHKE (TP) rocket has similar flight data and can hit targets within the same radius.

The product X-58USHKE is equipped with a combined guidance system with an inertial strap-free navigation system and a wide-range passive radar homing head. According to the developer, such equipment allows this rocket to hit the target (a circle with a diameter of 20 m with a working radar in the center) with a probability of 0,8. 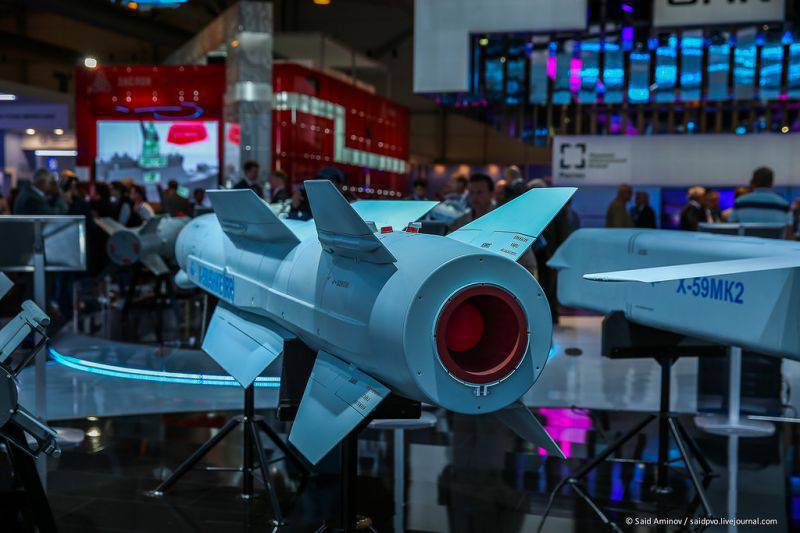 To improve combat effectiveness, the new X-XNUMHUSHKE (TF) rocket retains the existing guidance system with inertial navigation and passive radar seeker and also receives one more additional equipment unit. The television homing head is included in the target search tools. Apparently, the receiving devices of this system are placed in two small fairings in the head part of the rocket, on the lower surface of the body.

Such a modernization of the homing systems of the new rocket can significantly improve the efficiency of the performance of combat missions. With the old passive radar homing missile X-58USHKE or its predecessors have certain limitations when attacking the enemy radar. The introduction of a television guidance system, in turn, makes it possible to increase the effectiveness of the use of a rocket for its intended purpose. The television system allows you to keep aiming at the target in the final segment of the trajectory in a situation where the enemy, seeing the threat, tries to confuse the rocket by turning off the transmitter. In this case, the X-XNUMHUSHKE (TP) rocket must “memorize” the appearance of the target and complete the guidance with the use of a video signal. In addition, it can be assumed that the television guidance system allows the use of a rocket not only to destroy the radar, but also to attack other targets.

According to reports, the model of a promising rocket was demonstrated at the MAKS-2015 exhibition. Information about the existence of full samples or their testing is not yet available. In 2013, it was reported that KTRV is testing X-58USHKE missiles using a special flying laboratory. Similar information about the new project X-XNUMHUSHKE (TP) has not yet been published.

Due to the minimum dimensions in the transport position, the combined guidance system and high flight characteristics, the new tactical guided missile X-58USHKE (TP) has every chance to replenish the list of weapons used by Russian military aircraft. However, first this product will have to be tested and show its real capabilities.