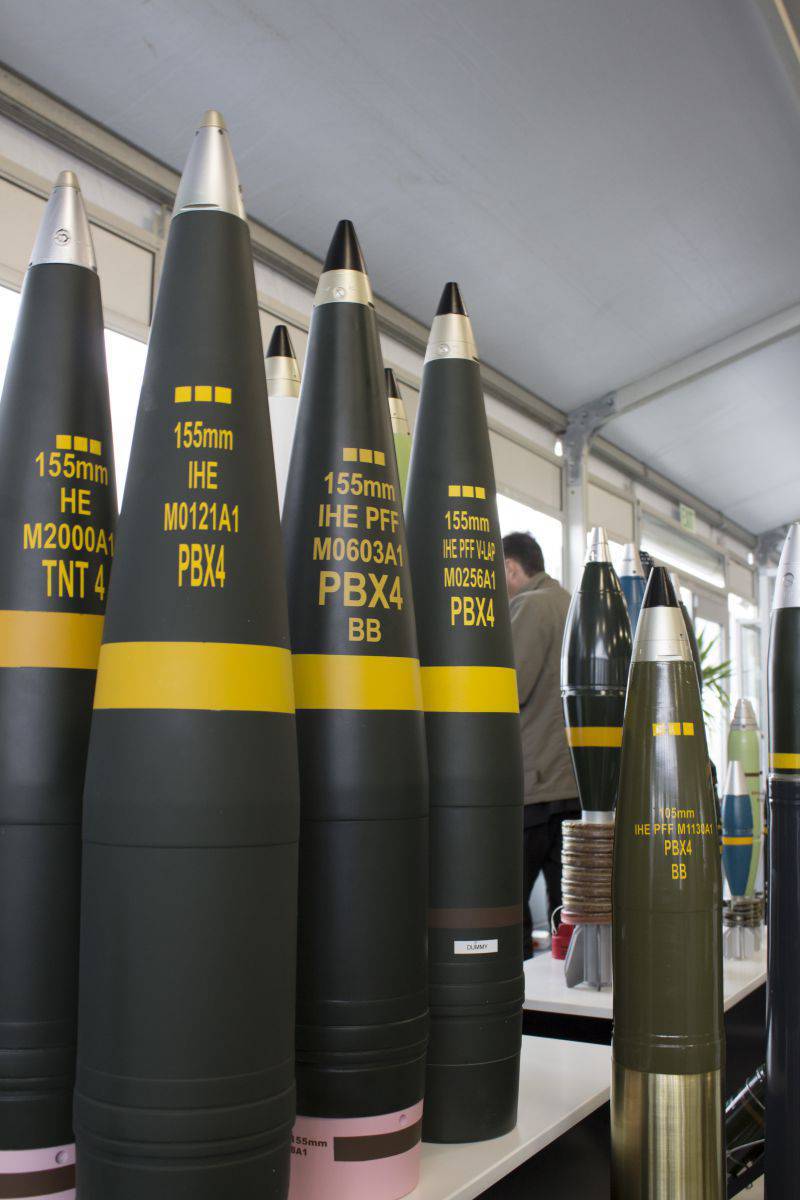 Under standard conditions, an active DM121 projectile with a tapering tail also known as Rh30, when fired with six DM72 / DM92 modular charges from the 52 barrel of a self-propelled howitzer of the German army PzH2000 or any other weapon of the L52 caliber, has a maximum long range 3040 The company RWM in its line has a version with a bottom gas generator, designated Rh131 (or DM40), which can reach distances over XNUMX km with the same charges.

In addition to the fact that DM121 meets modern standards for low-sensitivity ammunition (STANAG 4439), it will give the German army better concrete-breaking capabilities compared to the DMNNXX 155 high-explosive fragmentation projectile supplied by Rheinmetall as an intermediate solution. DM111 is a development of the L111A15 / A1 HE projectile (Composition B explosive), first put into service in 2-x for howitzer caliber 70. Compared to the L39, he has improved the external geometry, strengthened the leading belt and shutter, which allowed him to shoot from the L15 trunks at a distance of 52 km.

According to a representative of RWM, speaking at the defense day Rheinmetall Defense Day, held in South Africa at the end of April 2015, the latest tests of an experimental batch of DM121 shells, conducted at the Alcanthpan test site in March 2015, confirmed their “high accuracy”.

He also said that a new batch of DM121 projectiles is being manufactured and they will soon undergo further qualification tests. Completion of tests is scheduled for mid-year 2016; this should allow RWM to begin the execution of a serial contract for 30000 shells, which she received from the German army in 2009. 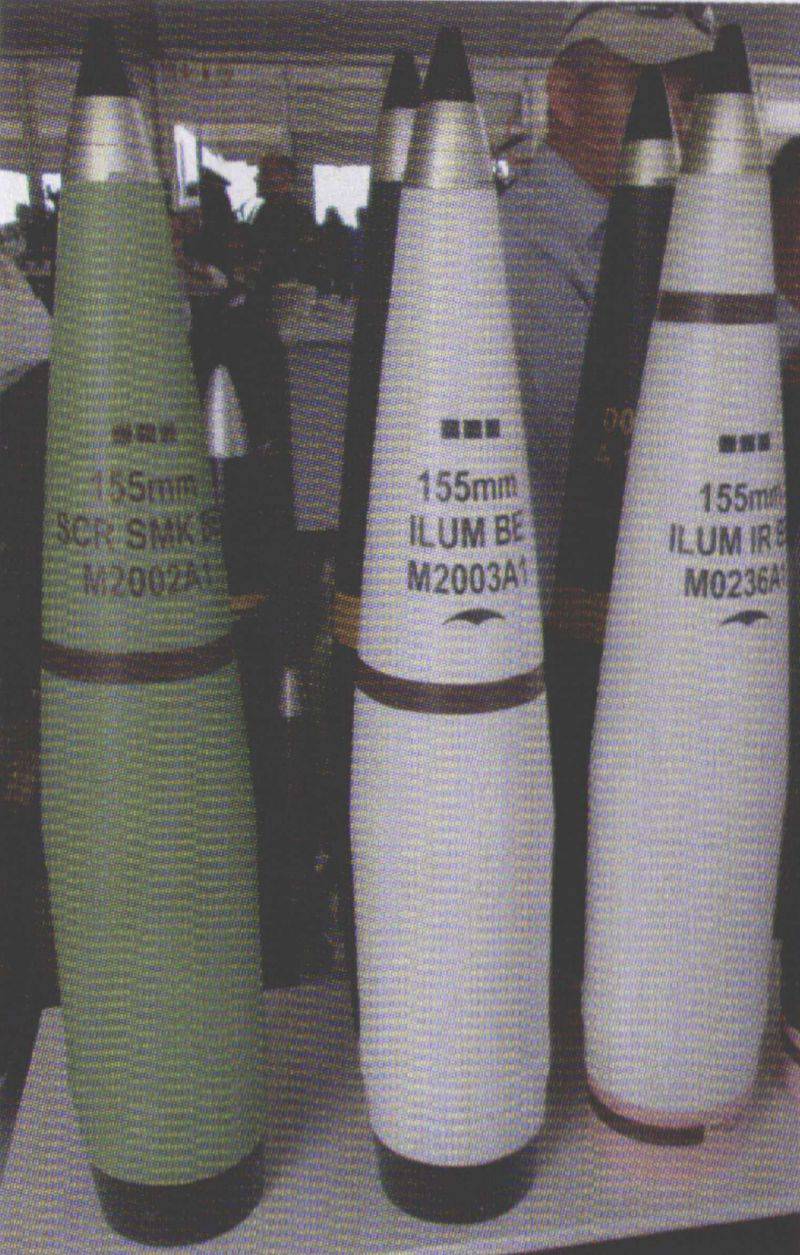 The warheads of the shells in the Assegai family ballistically coincide with their high-explosive fragmentation counterparts, so they have the same characteristics: (from left to right) smoke M2002A1 (red phosphorus), lighting M2003A1 and lighting M0263A1 infrared (black light). The latter has a gas generator (pink), which can be replaced in the field with a narrowed tail section (such as its neighbors are equipped with)

The delay in testing and evaluation of the DM121 projectile is to some extent related to the experience of the Dutch army, obtained from its counterpart Rh40 in Afghanistan. It was filled with the same type of Rheinmetall patented low-sensitive high-explosive mixture Rh26 (vulcanized plastic PBX filler), which was originally chosen for DM121, but fundamentally different in the gas generator built into the tail end. Although installing a bottom gas generator reduces the mass of an explosive (BB), it does allow to reduce bottom resistance in the initial segment of the trajectory and thereby increase the range to more than 40 km.

Although the Rh40 was never adopted by the German army, it became the object of preliminary safety and type tests (like DM131), conducted from 2005 onwards in the official German test center WTD91 in Meppen. They were carried out in the interests of prospective foreign customers of the PzH2000 howitzers, primarily Greece and the Netherlands.

In September, the Dutch army urgently deployed three recently deployed PzH2006NL howitzers in Afghanistan 2000. This happened before the scheduled commissioning date of these howitzers, moreover, at that time, Rh40 certification was not completed.

As a result, the Dutch army had only the traditional high-explosive high-explosive shells M107 and carpenter charges for firing, which initially limited the practical range of howitzers PzH2000NL to about 17 km. This meant that the Dutch army could not provide optimal terrain coverage between its advanced bases in Afghanistan, which were separated by a mountain range and were at a distance of 40 km from each other.

As an emergency measure, by the end of 2006, the Dutch Army had supplied RWM with a number of pre-production shells Rh40, along with the ballistic software needed to upgrade its artillery fire control system. (The German army also took up the supply of smoke and lighting equipment to the Dutch). In April, the 2007 of the Woomera test site completed additional safety and compatibility tests between PzH2000NL and Rh40, conducted jointly with the Australian army (which at that time evaluated PzH2000), after which the Dutch army was allowed to fire Rh40 shells from their howitzers during military operations.

In 2009, at a conference on artillery prospects, Colonel Peter Froeling, inspector of the Dutch army, spoke about the experience of PzH2000NL howitzers in Afghanistan. He noted that she had proven herself to be “very” accurate at ranges up to 22 km. However, the overall accuracy of the system did not allow hitting any targets at distances greater than 32 km (reachable only with Rh40 ammunition) at which dispersion in some cases exceeded 1 km or the observer did not see the fall of the projectile at all. Also there was a case of premature operation and in connection with this, the Rh40 projectile was decommissioned.

At the same conference, Froling noted that a further study of the characteristics of the Rh40, including increased ranges and high temperatures, was planned at an artillery range in Turkey.

Ultimately, these tests were moved to the Alcanthpan test site in South Africa. No details about their results in the media were not published. However, it is clear that some characteristics that negatively influenced the fate of Rh40 could be attributed to its insensitive explosives, while others could be related to the fact that the shells of the pre-production batch were hastily modified for mass production. Later, the subcontractor Eurenco filled the DM121 projectiles from the last batch with another explosive, and as a result, good results were shown at this year’s firing. 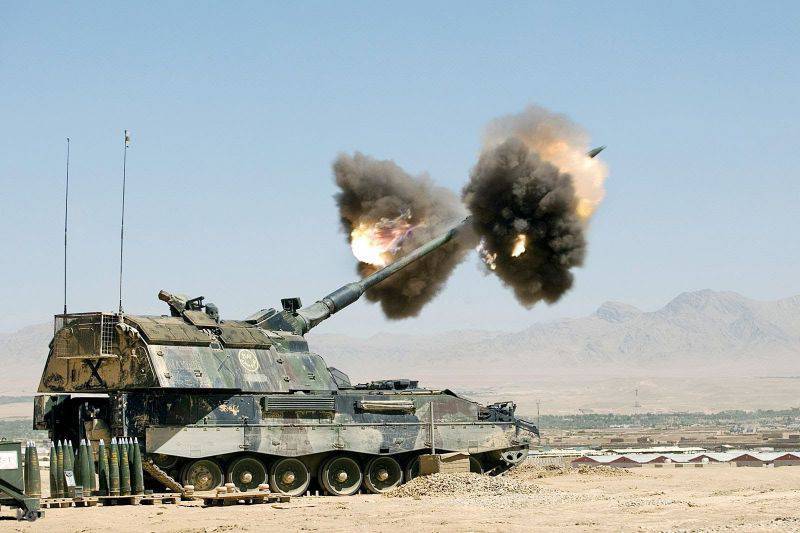 Tests in South Africa gave the Dutch army the opportunity to evaluate the locally assembled Assegai extended-range munitions developed by Rheinmetall Denel Munitions (RDM). It includes projectiles of natural fragmentation with an insensitively pressed PBX-4, having interchangeable tapering tail section and a bottom gas generator, which allow to obtain ranges corresponding to the Rh30 and Rh40 ranges. An improved version of M0603A1 is also being produced with ready-made striking elements, which, according to the manufacturer, forms 20000 fragments. This is four times the number of fragments in a standard (American M107) projectile, and its plastic explosive PBX-4 gives the fragments three times greater speed.

At a conference on artillery prospects in March 2015, the head of the Dutch Army's expert center said that his army decided to choose Assegai shells, with which, as he put it, his army is now "very happy." A spokesperson for Rheinmetall confirmed that the Netherlands was leading the Assegai qualification process, but this process will be completed only by the middle of 2016 for the M0121Al projectile and by the middle of 2017 for the cluster of projectiles (and not in the 2015 of the year as previously reported). The delivery of several thousand M0121A1 projectiles in versions with a bottom gas generator and with a tapering tail section will also be completed by the middle of 2017. He noted that M0121A1 will be able to accept both conventional fuses and deep penetration fuses, such as the M1156 PGK (Precision Guidance Kit) fuse with course correction based on Orbital ATK GPS.

Qatar became the first buyer of the family of ammunition Assegai. The first shipments will be held at the end of the 2015 of the year, the shells will be used with the PzH2000 self-propelled howitzers that this country ordered from Krauss-Maffei Wegmann in the 2013 year. The Qatari order includes a hybrid active-reactive version of the M0256A1 V-LAP with a range of 60 km, whose pre-fragmented body allows you to create a total of 13000 fragments. However, the contract from the Dutch army is considered more important, since this is the first order received from a NATO member state.

According to the representative of the company RWM, the decision was made at the level of the group of companies. It is that the RDM Assegai family should be the future preferred solution for all export requirements for 155-mm ammunition, including NATO countries. Officials at RDM claim that the high-explosive fragmentation variants of the Assegai family of ammunition are now not only compatible with the low sensitivity standard, but also show a low level of dispersion at extended ranges, partly due to their bodies mechanically machined inside and out.

Compared to the Rh40 projectile, the V-LAP version allows you to shoot at targets at significantly longer ranges. The entire family, including Rh30 / 40, was created in accordance with the provisions of the joint ballistics memorandum adopted by the NATO countries. Consequently, the Assegai difference is that smoke and lighting projectiles can reach the same maximum range as their high-explosive fragmentation variants, respectively, active (from a narrowing tail section) and active-reactive (with a bottom gas generator).

Not only German ammunition developers fought for the introduction of low-sensitivity artillery ammunition of the new generation.

British plans for the production of 105-mm and 155-mm insensitive munitions were stopped for several years, while scientists investigated the cause of several explosions in the barrel of an experimental 105-mm projectile XL50, the predecessor of a larger caliber.

BAE Systems currently expects to begin production of a modified high-explosive 105-mm XL53 projectile with a ROWANEX 1100 IM warhead in 2017, but the plan for the 155-mm projectile has not yet been announced. It is reasonable to assume that British and German efforts to develop an 155-mm projectile may occur; not least because Germany is in the decision-making stage, and also due to the fact that BAE Systems and RWM have previously worked closely together (although mainly in the field of propellant charges).

The Rheinmetall group chose to consolidate the entire shell production in South Africa for commercial reasons, although from a strategic point of view it would be better for the British and German governments to continue to rely on production in Europe.