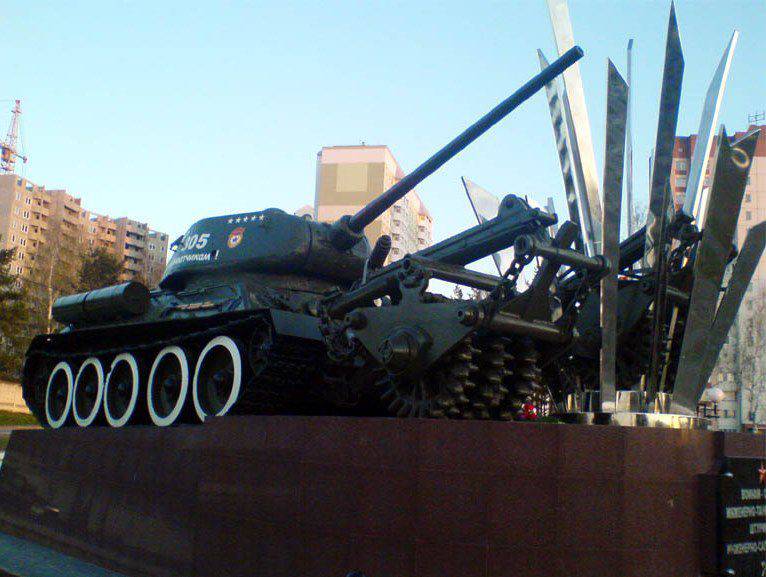 Mine trawl - a special type of engineering weapons, appeared as a means of overcoming (reconnaissance) tanks minefields on the march and on the offensive. Today, this type of weapons continues to improve in parallel with the development of mines. weapons and mine-explosive barriers.

Search tools for individual anti-tank (PTM) and anti-personnel mines (anti-personnel mines) began to be developed from the moment of the development and widespread use of mine-explosive weapons in armies of potential adversaries. Initially, these were metal probes that were used manually, metal cats, which were thrown on the checked area of ​​the area and caused the mine to be detonated or removed from the installation site while pulling the cats. 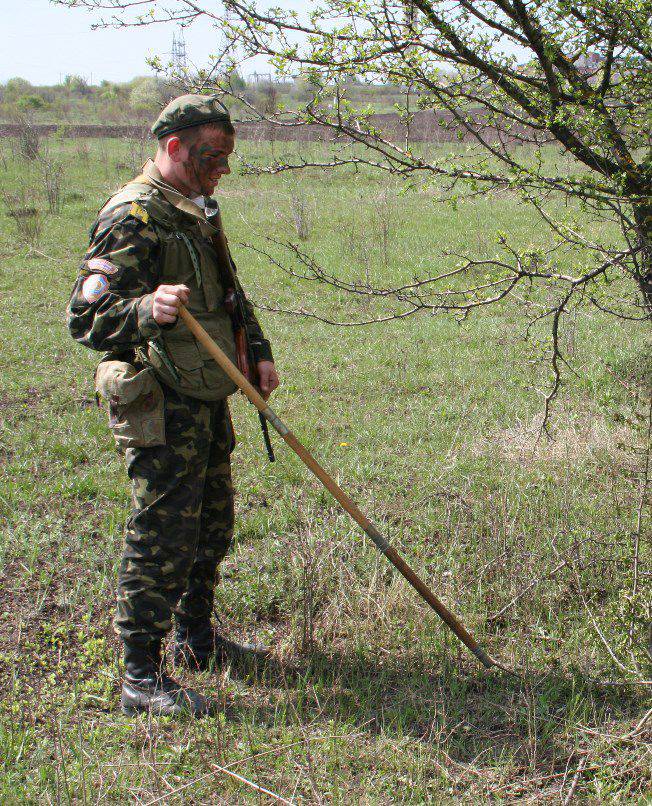 Search for mines with a probe 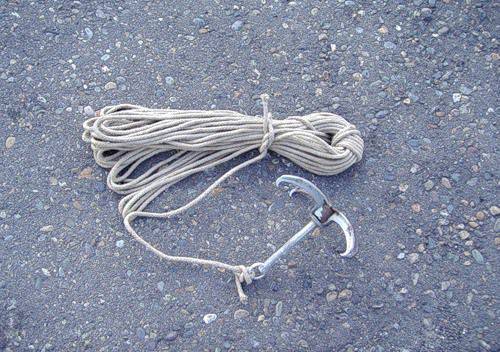 The increasing complexity of the design of mines and the improvement of mining methods required the creation of special devices for the search for mine - mine detectors. The first samples of mine detectors were created in 1934 by a Soviet military engineer B. Ya. Kudymov. 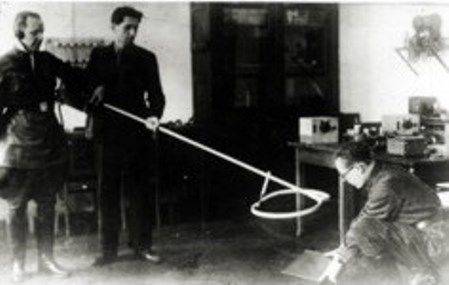 The test of the Soviet mine detector VIM-2. B. Kudymov - far left 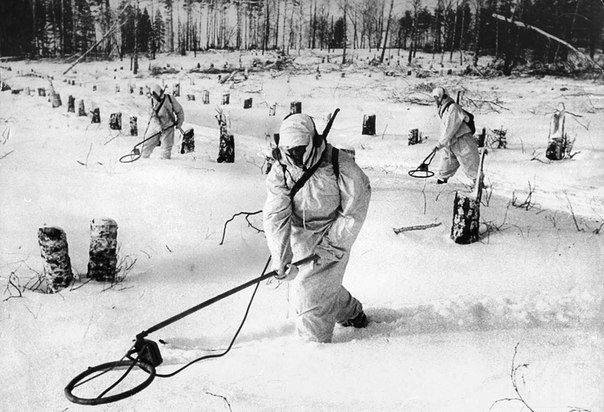 The increase in the scale of mining, the need for troops to increase the pace of engineering intelligence on the march, as well as the need to quickly overcome (trawling) minefields (MP) when attacking the front edge of the enemy led to the creation of the first anti-mine trawls. The first experiments with similar engineering weapons were conducted during the First World War by the British and French. Thus, in 1917, the French delivered the first anti-mine trawl of a plow type for trawling German PTMs on the Renault FT-17 tank. There is no test data, so it is difficult to say something about the successful use of the trawl. 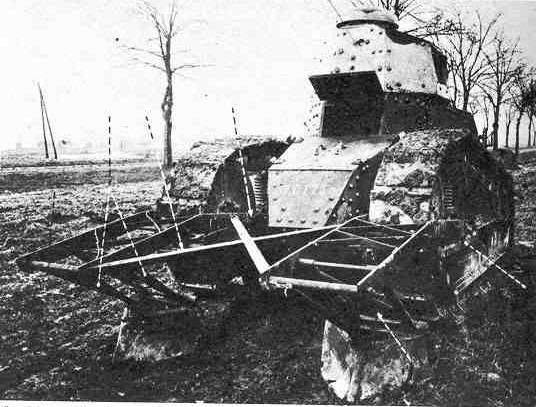 Under trawling mines understand any impact on a mine, eliminating the possibility of undermining various targets on it. The result of such an impact may be the destruction of mines at the installation site or the removal of mines from the strip along which the target moves.

Devices that provide mechanization of the trawling process in order to make a passage in the MP are called means of overcoming the mine-explosion barriers. In our particular case mine sweepsthat hang on the tanks. 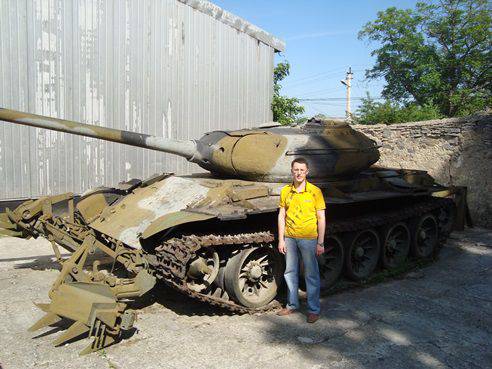 The author of the KMT-8 mine trawl knife type

Manual mode applies only in cases where it is impossible to use other means and methods. Disadvantages - a significant expenditure of manpower, loss of personnel, low rates, difficulty of disguise. 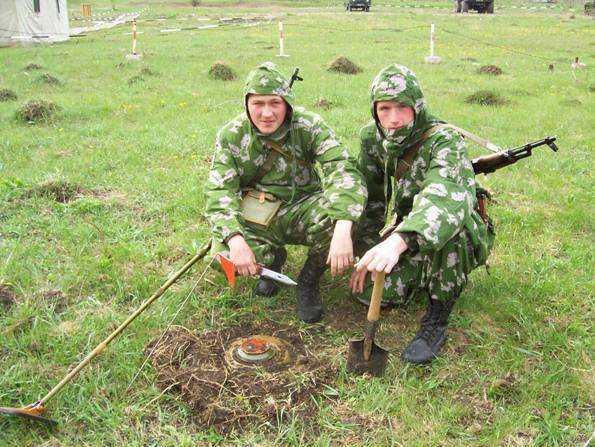 Explosive way Trawling is based on the use of the basic dynamic parameters of the explosion of the charges of various explosives or mixtures, as a result of which the mines are triggered, are mechanically damaged or are removed in a passageway. 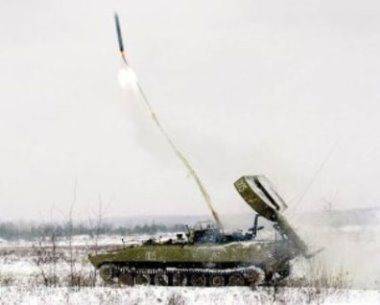 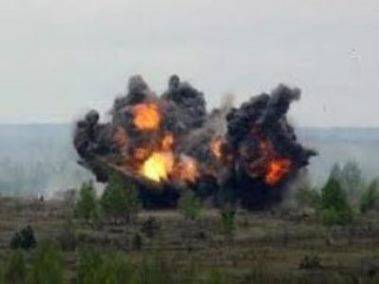 At the beginning of the 80-ies in the USSR, a unique demining machine was developed - the BIB “Oboe”. The author was told about it by a retired colonel V. Sytnik, who in 1979-1983. He was a test engineer of an engineering armament at the 18 research and development range near Leningrad. According to Vladimir Dmitrievich, the Oboe was developed on the basis of the T-72 flamethrower tank (according to the colonel). Externally, the BIS was no different from a flamethrower tank, except that a special volume-detonating fluid (a mixture of gasoline with special additives) was ejected through a flamethrower nozzle, and instead of smoke grenades, grenades were fired to initiate a volume-detonating fluid. Testing the car was held on the experimental ground of engineering machinery Nakhabino near Moscow in 1982 year. For the detection of mines on the machine, a thermal imager was installed: the mine in the soil has its own temperature and, on average, it acquires soil temperature only in 8-10 days. Thermal imager just determines the mines in the soil by the temperature difference. Military tests BIS "Oboe" was held in Afghanistan, where she was guarded by a special forces company. 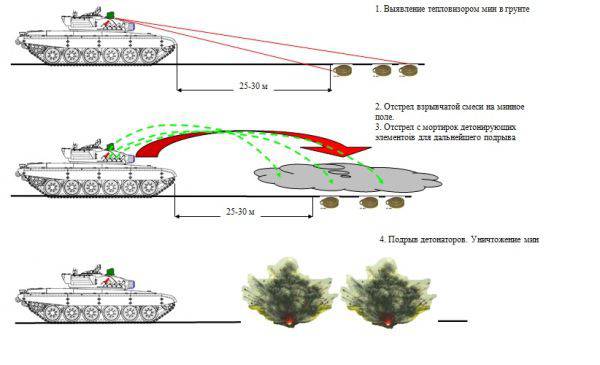 The principle of operation of the machine was as follows. When the BIS approached the minefield or detected the mined area, it made a shot (“films”) of the explosive mixture at a distance of 25 m, the width of the “film” reached 10 m. After that, several grenades were shot with a trigger charge which in turn undermined (deactivated) mines. After that, the car moved forward again on 25 m and made a new shot. In the series, the car did not go.

Americans used a similar technology in Iraq only at the beginning of the 21 century. For the destruction of anti-aircraft mines with the help of volumetric explosions, the Americans widely used sprayed and explosive mixtures based on propylene oxide. In particular, the marines had a CATFAE catapult with a 21 guide, and the ground infantry had a SLUFAE 30 trunking unit. 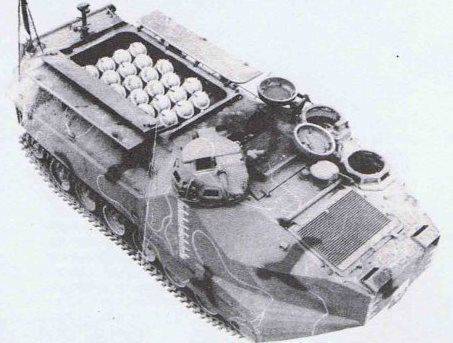 Mechanical method trawling involves the use of various devices and mechanisms - mine trawls of mechanical action, embedded in the moving base chassis or hung on it and directly affecting the mines by links of a certain type. 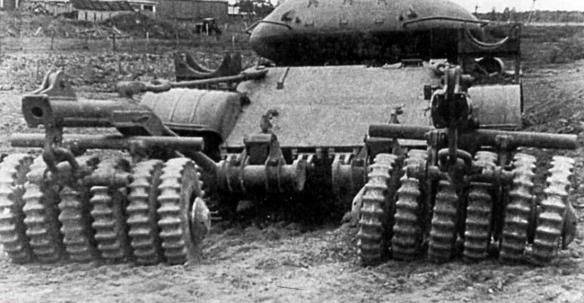 Gas-hydrodynamic method It is based on the use of thermal energy of the outgoing gas (air) or liquid fluids from special nozzles, while mines are triggered, destroyed or removed over the aisle. 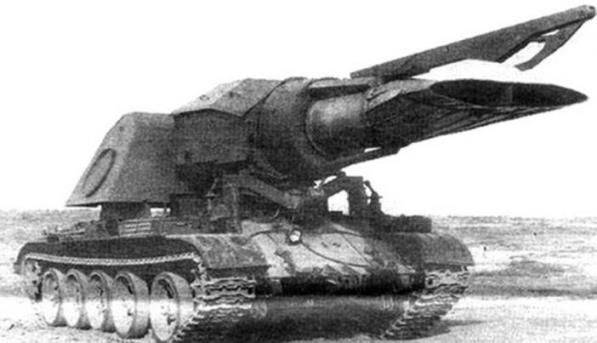 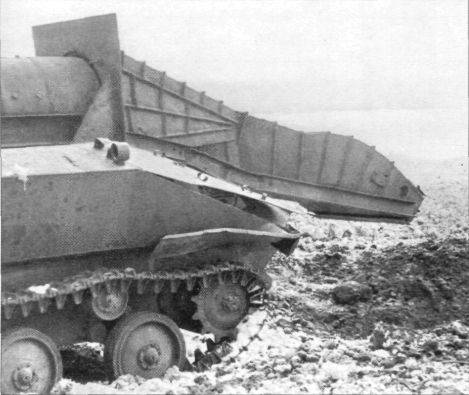 The second sample of the K-90 tank was tested by an experimental gas-dynamic trawler of BMI. CRI them. D.M. Karbysheva (p. Nakhabino)

Thermal method Trawling involves the use of thermal energy from various sources, ensuring the initiation of the main explosive charge and the detonation of the mine, the melting of the charge or burning it in order to avoid detonation.

Chemical method based on the introduction of aggressive components in the explosives, phlegmatizing it and eliminating its detonation ability (mainly wax, ceresin, stearin, paraffin, sometimes solid lubricants such as graphite).

Duplicate method Trawling is based on the imitation in the environment of spurious physical fields, similar to the fields that create real moving targets, with the aim of proactively affecting the corresponding reactive mine drives and leading to an operation at a safe distance from the target. 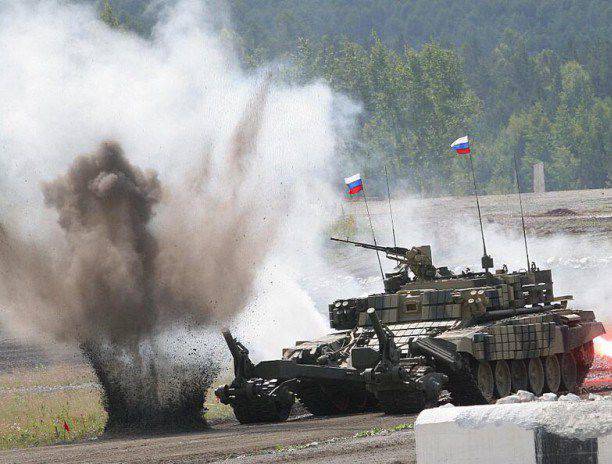 The explosion of a mine in front of the BIS-3 is caused by the work of the electromagnetic prefix EMT, which creates a false magnetic field of a real tank.

Blocking way based on the induction of powerful non-mechanical fields at the location of reactive drives PTM in order to block or disable elements of the electronic circuit and eliminate the ability to perceive the physical field of the bronzesel.

Structurally, mechanical trawls according to the principle of impact on mines are divided into three types: push, dig and shock. Their combinations are possible.

Pressure Trawls they create local pressure on the ground or surface of the mine to destroy the hull of the mine or to lead to an explosion of the mine with pressure actuators. By design are divided into sliding and roller.

Sliding trawls not spread due to the large resistance to movement and low blast resistance of the working bodies. 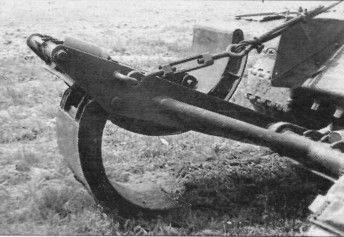 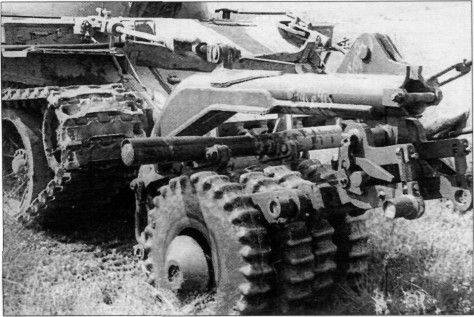 Skating rinks have a different shape. Of all the forms under equal conditions, the lenticular form skating rink possesses the greatest explosion resistance. The presence of any protrusions on the rinks reduces their explosion resistance. However, it is impossible to do without them: broadening on the sides of the rollers helps to reduce the inter-cage space, which increases the trawling properties. 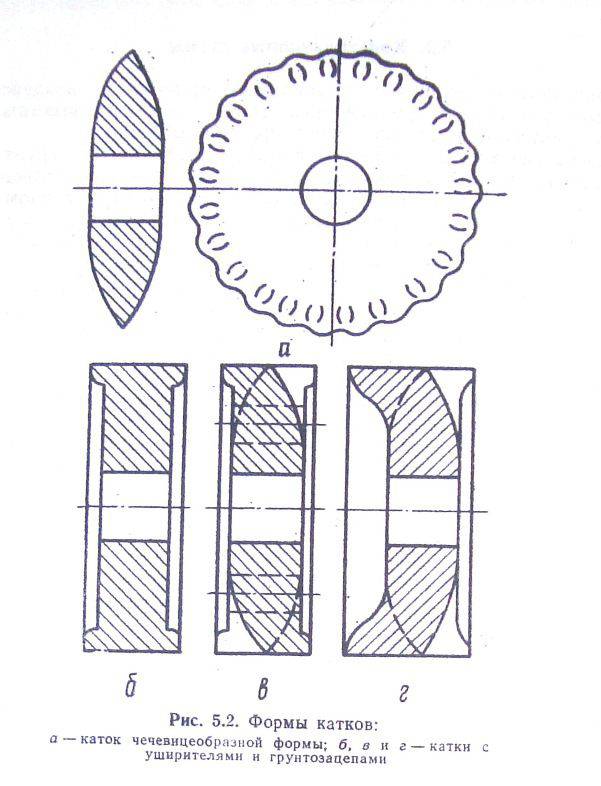 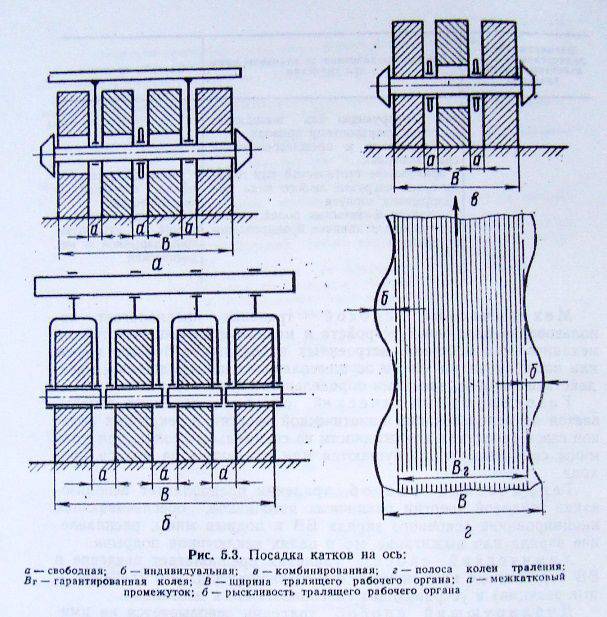 Landing rollers on the axle

RџSЂRё free landing Rollers with a large gap sit on the axis, which contributes to good copying of the area. The pressure force during such a fit does not exceed the weight of the roller. Therefore, taking into account the reliable trawling of mines, the mass of each roller is taken at least 500 kg At the same time, the free landing of the rollers creates conditions for high yawning (wagging of the rollers on the axis) of the trawling body during movement. When the speed of trawling is more than 5 km / h, the drag coefficient of such trawls increases, which is explained by the impact of freely set rollers. 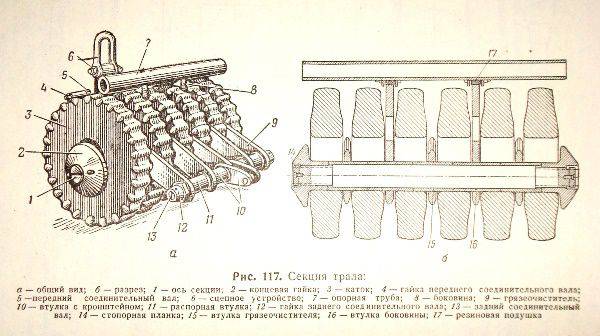 RџSЂRё individual landing Each roller is planted with a bearing on its own axle and has an individual axle suspension to the traction frame. At the same time, good terrain copying is ensured, but the pressure on the mine does not exceed the weight of the roller and the cross-rolling gap is more significant than with a free landing.

RџSЂRё combined landing outdoor rollers are planted on the axle without a gap, and the middle is free. This scheme is used on modern KMT-7 trawls. 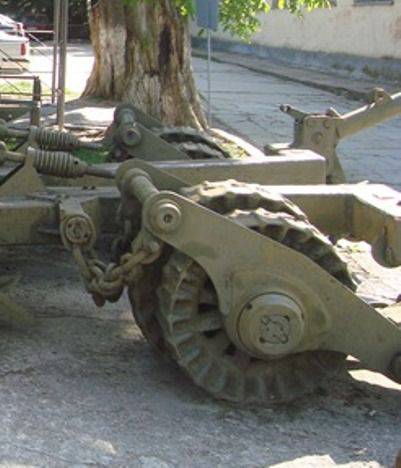 The main advantage of roller trawls is the relatively high trawling reliability of pressure-driven PTM (0,9 — 0,95), simplicity of design, high trawling speed (up to 15 km / h), considerable explosion resistance (up to 10 — 14 blasts min. Weighing up to 7 kg).

Disadvantages - a large mass of the skating rink (500 kg), low permeability of the trawl in loose and sodden soils, increased wear of the transmission, significant fuel consumption.

Digging trawls. Of the trawls of this type, knife trawls (of the passive and active type) are the most widespread; they have rigid knives (like a plow) that cut through the soil as a working tool. When trawling, knives are buried in the ground, mines are extracted onto its surface, and they are withdrawn or thrown out of the ground strip. The advantage of digging trawls lies in their ability to trawl all mines regardless of their type and reacting drives.
Trawl knives active type continuously rotating and alternately embedded in the ground. Rotation allows you to maintain the performance of the trawl design, even if there is a 1 — 2 knife in each row. The disadvantages of these trawls include the high energy intensity of the trawling process.

Trawls passive type deprived of the above disadvantage. The simplicity of the design, the small mass (400 — 1000 kg), compactness and versatility led to their wide distribution in the army as individual means of tanks and infantry fighting vehicles in overcoming the enemy’s MP.
The disadvantages of knife trawls include their low blast resistance, the need for high traction force and dependence on soil and climatic conditions (for example, the complexity of trawling in winter conditions). In the working position of the trawls, it is impossible to carry out quick turns of tanks (BMP), which in combat conditions dramatically reduces their combat properties.

The efficiency of digging trawls on loose, sodden or frozen ground, on a concrete or stony surface, in low forest with a highly developed turf cover, is especially low. 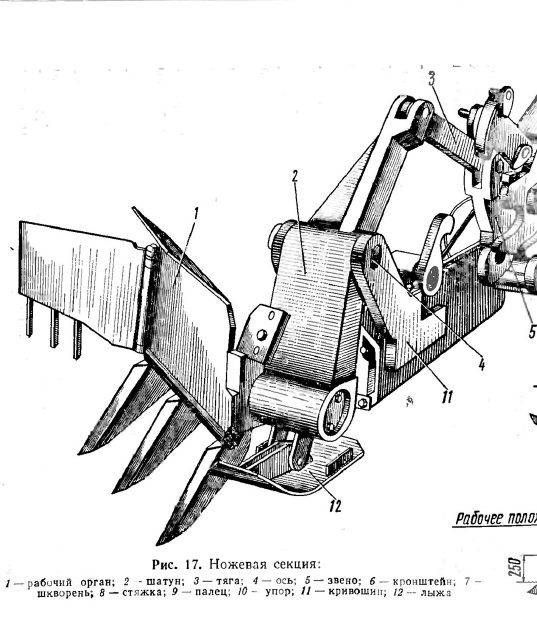 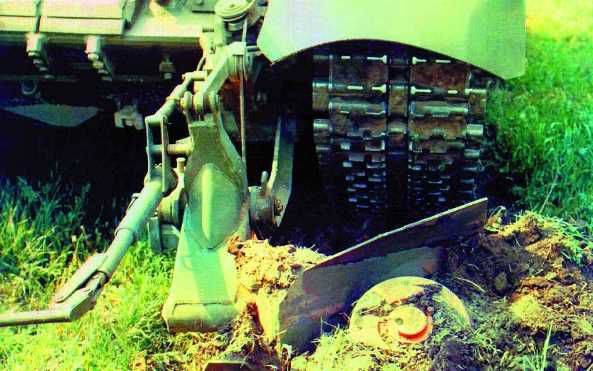 Shock (peen) trawls. The work of impact type trawls is based on the use of impact loads from the strikers on the ground or the hull of the mine, leading to the destruction of the mine, release or operation. The striker (fig. Below) is fixed with a chain or rope on a rotating drum. When a mine explodes under a trawl, the chains with strikers that are in the explosion zone are partially or completely destroyed. Since the explosion site has several strikers, the trawl will retain its working capacity. Replacing broken chains with strikes is simple and easy. 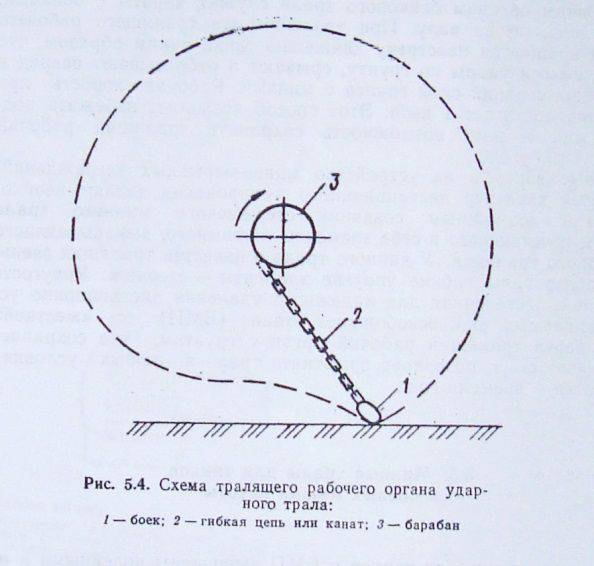 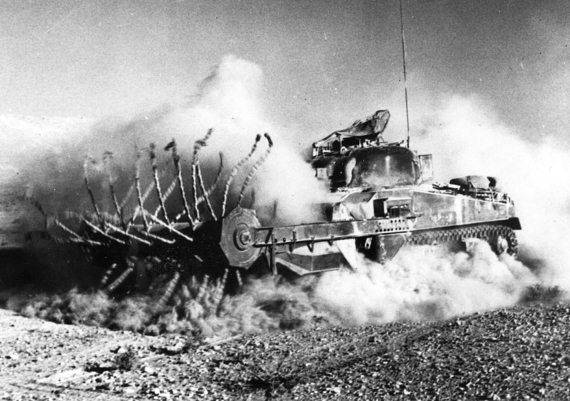 The positive sides of such trawls include high trawling reliability (regardless of the type of mines and their drives), three times less weight than the trawling working body compared to roller trawls, sufficient blast resistance (10 — 15 explosions), the ability to be used on virtually any terrain, any weather and climatic conditions.

However, the practical use of shock trawls in the Soviet Army was not received mainly because of the relatively large expenditure of power to drive them, unmasking the places of use due to the dustiness of the trawling process. Boykoi trawls were widely used in the English army during the Second World War. Today they are used in the same English army, as well as in the German, American and Russian armies. 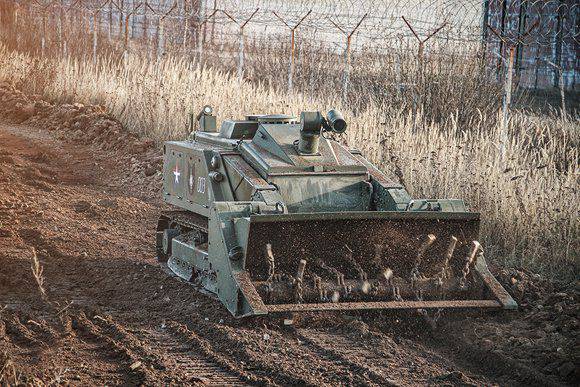