Increasing the intensity of the flight of the UAV, the United States faced a shortage of operators


In the next few years, the US Department of Defense intends to significantly increase the number of daily sorties of unmanned aerial vehicles (UAVs) over conflict zones around the world. In this case, for the first time, the Pentagon intends to connect other types of armed forces to the accomplishment of these tasks, in addition to the Air Force.

Ministry of Defense plans mean high-level recognition of the fact that the park is unmanned aviation the air force can no longer satisfy the wide demand of the armed forces for combat air patrols performed by drones, mainly due to a serious shortage of UAV operators.

Many eyes of "Big Brother"

“The demand exceeds the supply in this kind of activity,” declared the official representative of the US Department of Defense, Navy Captain Jeff Davis. “We see a stable signal of demand from all military leaders who are in charge of our geographical command.” According to him, by the year 2019, the intensity of UAV flights will increase by about 50 percent: from the current 60 – 65 to 90 per day. At the same time, the air force unmanned fleet will continue to provide the current level of daily departures for combat patrols in 60. The ground forces are responsible for carrying out 10 – 20 daily sorties, while the US Special Operations Command is responsible for the remaining 10. Additionally, 10 daily departures will provide operators for the contract. The UAVs they control will not carry airborne weapons. 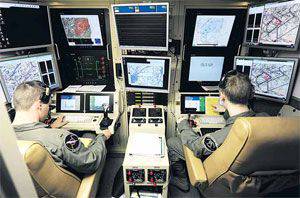 The Pentagon plans to increase the intensity of the use of the growing MQ-1C Gray Eagle fleet of the US Army, which is a modernized version of the Predator air force. Meanwhile, such an important task is put before the NE at the moment when the budget sequestration forces a reduction in the army.

The Navy does not have a substantial fleet of large reconnaissance UAVs. MQ-4C Designed for fleet under the program for monitoring marine areas, it will enter service no earlier than 2017.

In connection with the completion of the US mission in Afghanistan, the Ministry of Defense last year tried to reduce the intensity of daily patrols, which averaged 55 sorties carried out with the help of air force operators. But after the Islamic State militants conquered a significant part of Iraq, the need for drones increased dramatically and the United States began daily to perform the tasks of observing, intelligence and collecting information about Iraq and Syria.

The agreed plans will require more specialists. Consideration should be given to ensuring an appropriate budget, personnel, training and equipment for the armed forces, Davis noted. In particular, a large daily flight intensity implies an increase in the amount of intelligence collected, and this means an increase in the number of experts involved in its analysis.

Meanwhile, the US Air Force is now solving the difficult task of preserving the operators of its unmanned aircraft fleet. The main reasons for layoffs are long working hours due to global demand, attractive alternatives in the private sector and long-standing complaints that the Air Force treats operators as secondary personnel in comparison with pilots of manned aircraft that dominate the leadership of this type of aircraft. As one of the measures designed to preserve personnel, it is proposed to save a bonus in the amount of 135 thousand dollars for redeemed operators MQ-1 “Predator” and MQ-9 “Reaper”.

According to estimates by the Air Force, they need an annual replenishment of the order of 300 drone operators to effectively accomplish the task. However, the existing training opportunities allow only about 180 troops to be trained.

According to a recent report by the US General Audit Office in March this year, the Air Force had an 83 percent of the required number of UAV operators. The report also noted that only 35 percent of UAV operators required to complete all missions were prepared. US drones are used in the fight against militants in Syria and Iraq, in the conflict in Afghanistan, against extremist groups such as Al-Shabab in Somalia, to gather intelligence in the Pacific region.

Unmanned Aviation System (BAS) MQ-1 / RQ-1 "Predator", which is in service with the US Air Force, developed by General Atomiks Aeroonautical Systems (General Atomics Aeronautical Systems). Each such system includes four medium-height UAVs of the MALE type (medium-altitude, long-endurance) “Predator”, a ground control system and the main satellite communication system PPSL (Predator Primary Satellite Link). To deploy the system, it is loaded into a container, which is delivered to the place of deployment on a transport aircraft of the C-130 Hercules dimensions. In the 2009 year, the cost of one Predate BAS was 20 million dollars. The device is controlled by a crew comprising a highly qualified pilot and an operator of payload systems. A team of specialists ensures readiness for departure at the right moment.

Although initially the Predate BAS was developed for reconnaissance missions, it is also capable of performing impact tasks. Therefore, at first, the device was designated RQ-1, where R (reconnaissance) means reconnaissance, and Q - remote-controlled. In the following designation MQ-1, the letter M (multirole) means multi-purpose. It appeared in 2002 after equipping the Predator with AGM-114 Hellfire guided missiles. "Predator" was the first in the world of UAVs used for percussion operations.

BAS MQ-9A "Reaper" is a deeply modernized version of the "Predator" and was originally called "Predator-B". Riper made its first flight in 2001. This BAS is larger in size and equipped with a more powerful engine. It can be used to solve a wide range of tasks and is better suited for performing shock missions. Satellite navigation system provides "Riper" the possibility of round-the-clock operation at long range. It was designed specifically for arming and has seven suspension assemblies, including one under the fuselage, which is not used, and three under each wing console.

High-tech equipment "Riper" includes, among other things, Rayteon's AN / DAS-1 targeting system and the AN / APY-8 Lynx II synthetic aperture radar capable of operating in the mapping mode in the nose fairing. Disassembled "Riper" in a container transported by aircraft type C-130 "Hercules".

Further development of the “Predator” led to the creation of the Gray Needle MQ-1C UAV, which previously had the MQ-12 “Warrior”, “Alpha Warrior” and “Sky Warrior” (Sky Warrior) designation. He made his first flight in October 2004. The UAV is equipped with a diesel engine with a pusher propeller. The maximum flight duration is 36 hours. It can be equipped with intelligence systems or weapons. In July, 2013 th rose to the sky an improved version with improved features IGE (Improved Gray Eagle). This year, the USA will buy Gray Needles 29 and bring the number of systems in service to 152 units by 2022.

Meanwhile, the weekly Flyte reported that the US Air Force is likely to increase investment in small UAVs after the release of a long-awaited document on the new strategic vision at the end of the year. After its publication, the Air Force will release its “Small UAS Flight Plan”. According to calculations, light vehicles will perform many tasks currently assigned to large-sized unmanned systems, requiring much more funds. Such tasks include observation, electronic warfare, communications, and the delivery of tactical attacks in well-protected areas.

The Small UAS Flight Plan (MBAS) will be the first official announcement on the integration of such unmanned platforms into a wider Air Force action strategy. It encourages the leadership of the air force to invest in the development of the innovative, integrated capabilities of the IBAS to meet operational needs historically performed by large platforms. Over the course of several decades, the Air Force is expected to double the number of small-sized UAS in service, including the recently introduced Lockheed Martin and Northrop Grumman Sand Sand and Fury.

Now the lion's share of investment goes to large-scale platforms such as Riper and RQ-4 Global Hawk, but as noted in the Air Force, budget and labor cuts have led to a change in strategic thinking.

The development of the MBAS Flight Plan, which also covers the micro and nanoplatforms of the 1 group, was announced in September of the 2014 group at the annual conference of the Air Force Association in Washington. It is proposed as an analogue of the UAS Vector published last year, which explores the potential use of small and large unmanned vehicles up to the 2038 year.

Some of the applications for the IBAS that the Air Force considered in the past include cyber attacks, indoor reconnaissance, radio relay communications, electronic reconnaissance, and lethal and non-lethal attacks. This technique has been proposed for autonomous or semi-autonomous flights of large concentrations of vehicles and reducing the burden on the operator in order to act as locking ammunition or sensory systems of land or air basing.

MBAS may be limited in terms of power and payload, but Air Force officials believe that these systems are better suited to perform tasks such as full-frame video exploration than, in particular, Ripera and Predators. Experts believe that the air force shift towards the IBAS can be suspiciously perceived by the ground forces and the ILC, which are the largest supporters of small tactical UAVs and are competing for the same limited resources.

Meanwhile, the analytical company Til Group (Teal Group) predicts that global production of UAVs will triple over the next ten years. According to her, the annual production of UAVs will grow from the current 1,4 billion to 14 billions of dollars, and the total production volume in the course of the decade will be 93 billion. Military UAVs will have 72 percent of all costs, consumer platforms - 23 percent, and civil aviation vehicles - 5 percent. However, the use of UAVs in civil aviation will grow at the fastest rate as the opening of airspace for their flights around the world. The United States will remain the leader in the development and use of UAS.

According to analysts of Til Group, the UAV market looks steadily developing and is stimulated by the emergence of new technologies, such as next-generation unmanned combat systems, as well as new sectors in the market, such as civil aviation UAVs and drones for mass consumption.

Ctrl Enter
Noticed oshЫbku Highlight text and press. Ctrl + Enter
We are
In the US, drone operators have endedTurkey vs Syria: the balance of power
21 comment
Information
Dear reader, to leave comments on the publication, you must to register.