Will the Russian “Nerpa” drown the Indian “Chakra”? 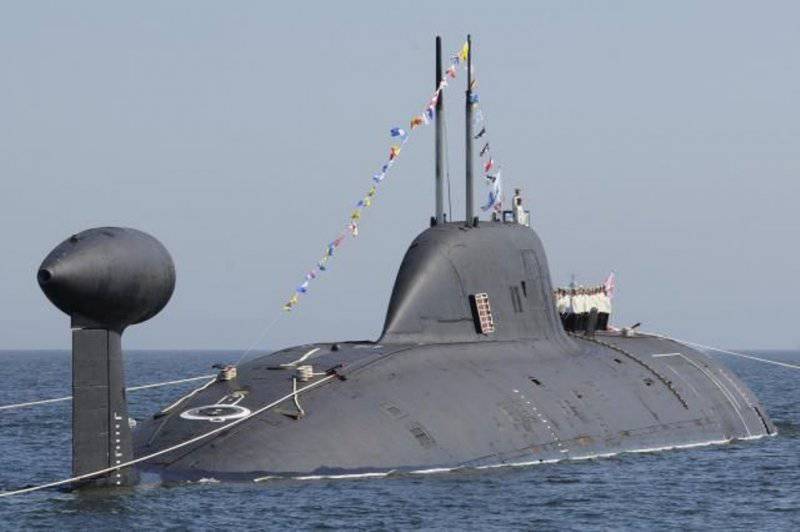 The end of the naval cooperation between Russia and India may come as a result of the current situation with the Russian nuclear submarine.

The contract of the Russian military with the Indian on leasing the last nuclear submarine "Nerpa" can finally "kill" the prospects for further cooperation in this area due to problems in Russian shipbuilding.

At the end of October, the leased nuclear submarine of the 971 and Nerpa project must be received by the Indian Navy.

15 days will be spent at sea by Russian and Indian sailors. And to eliminate the comments will take about seven days. Before 24 November, an official Nerpa show will take place.

The said deadlines were coordinated and finally approved by high officials of both countries, who met in the Russian capital in early October. The Indian boat, as voiced by the Indian military, was named "Chakra". Already cast the emblem of the boat, which on the appointed day will be installed on the wheelhouse of the boat. It will not do without coconut - it will, according to local traditions, be broken by the spouse of the commander of the “Chakra”, the so-called “mother” of the boat.

However, the Indian side has serious concerns about the reliability of torpedoes and rocket-torpedoes stationed on the Nerp, which often do not “see” the target. So in early June, the boat showed itself not with the best hand. Now its reliability is only about 35%, while in the Soviet Union it is 95-97%.

According to informed people, the Indian Navy officials are significantly bogged down in this contract, so that even if they wanted to, they could no longer refuse it. In addition, a lot of money was spent on preparing the base for "Chakra" in India, which is already fully prepared. Three years stretches the transfer of "Nerpa".

“The Hindus no longer want a repetition of such problematic situations involving our ships,” the source explained. - Yes, and our shipbuilders understand that such contracts can be forgotten.

The fact that the Amur Shipbuilding Plant (it was there that the “Nerpa” was built) refuses to build nuclear submarines, the head of the USC Roman Trotsenko recently announced at a special press conference. Among the main reasons for the refusal, he called the presence of shallow water en route to the landfill in the Sea of ​​Japan.

Meanwhile, India now has its own Arihant nuclear submarine, which is equipped with ballistic missiles. The training platform for it should be "Chakra".

In total, it is planned to build five submarines under this project. Two objects are still under construction, and the first, the main ship began its voyage in the 2009 year.

Under the Nerpu contract, the Indian Navy will use 10 for years, which will result in a tidy sum of $ 650 million. The Indian military were to receive the Nerpa nuclear submarine as early as 2008. But during the tests, the automatic fire extinguishing system was unauthorizedly turned on, 20 people died. Therefore, the timing of its transfer to the Indian Navy were postponed.

The Russian nuclear submarine "Nerpa" - according to the NATO classification "Shark", also has the name "Pike-B" - from the third generation of submarines. Well armed. Impressive characteristics of cruise missiles "Granat", which hit a target with a range of up to three thousand kilometers, there are also torpedoes and torpedoes.

It reaches speeds up to 30 knots, sinks to a depth of 600 m, displacement is over 12 thousand tons. May be under water for up to 100 days, team members - 73 person. In the framework of this project, 1984 submarines came down from the stocks of the 15 year.

India got the Chakra submarine on lease for three years back in the 1988 year, during the Soviet era. Alexander Terenov, in those days, the captain of the 1 rank, led the Russian specialists. The leasing period ended in the 1991 year and was never extended, which went against the plans of the Indian military.
Ctrl Enter

We are in Yandex Zen
From the Varangians to the Americans. Why did the United States lease a Swedish submarine?
Submarine type "Leopard"
16 comments
Information
Dear reader, to leave comments on the publication, you must to register.