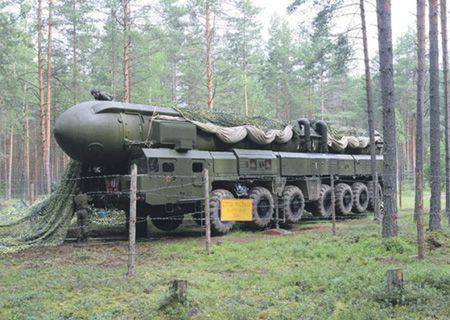 23 July 1985, in the area of ​​the city of Yoshkar-Ola, was put on combat duty the first in the Strategic Missile Forces (RVSN) missile regiment armed with a Topol mobile ground-based missile system (PGRK) with a solid-fuel intercontinental ballistic missile (MBR) 15XXXXXXXXXXXXXXXXXXXXXXXXXXXXX


The deployment of the first missile regiment armed with the Topol PGRK marked the beginning of the transition of the ground group of the USSR’s strategic nuclear forces from intercontinental silo-based ballistic missiles to a group of mixed personnel including mobile ICBMs.

This event is estimated by military experts and experts in the field of strategic nuclear weapons in our country and abroad to be no less important than the equipping of intercontinental ballistic missiles with individual-guided warheads. And for this there is every reason.

FROM PARITY - TO EXCELLENCE

The equipping of domestic ICBMs with individual-directed warheads was carried out in response to the implementation of such measures on the strategic offensive missiles of the United States of America. Thus, quantitative parity was achieved in strategic nuclear weapons between the USSR and the USA.

The result was the actual cessation in the 70 of the last century of a quantitative strategic offensive arms race and the conclusion between the two leading nuclear powers of the world of agreements on the limitation of strategic weapons SALT-1 and SALT-2. However, outside the contractual limitations, there remained the qualitative improvement and enhancement of the combat characteristics of strategic offensive arms.

Special attention was paid to improving the reliability and accuracy of delivery to the targets of nuclear warheads. In these areas, the United States had a definite advantage and sought to use it to the maximum extent. From the end of the 70-s in the United States began to develop, and from the middle of the 80-x - the practical implementation of plans to introduce into the SNA a new intercontinental ballistic missile "MX" and a modernized submarine-launched ballistic missile (Trident-2) . The main features of these missiles, in addition to the increased power and reliability of nuclear warheads, were high accuracy, reaching a level almost limit for ballistic missiles with an inertial guidance system. In the same period, work was carried out to significantly improve the accuracy of the “Minuteman-3” ICBM.

Forecasting at the turn of 70 – 80-s of the consequences of the implementation by the US military-political leadership of these measures to improve the SNA indicated the danger of an unacceptable reduction in the survivability of a group of domestic strategic missile forces. But in fact, the ICBM of the Strategic Missile Forces concentrated about 60% of warheads of a group of strategic nuclear forces of the Soviet Union!

Previously, the ratio of the combat characteristics of the US SNA missiles of the previous generation with the protection characteristics of the silo launchers of intercontinental ballistic missiles RVSN predetermined the outfit of nuclear warheads necessary for the guaranteed destruction of silos at the level of 4 – 5 units. Given the total number of ICBMs in the Strategic Missile Forces grouping, the US SNA missile outfit, which by its characteristics could have been planned in a counter-force strike to defeat the silos, on average did not exceed three warheads per launcher (launcher). It is quite obvious that the survivability assessment of the Strategic Missile Forces grouping at the same time corresponded to a sufficient level. With the introduction into the US SNA grouping of ballistic missiles with enhanced combat characteristics, the predicted outfit of nuclear warheads for guaranteed defeat of silo drops to 1 – 2 units. At the same time, the capabilities of the US SNA for the allocation of a number of warheads to destroy the silos in the conditions of the implementation of the SALT-2 Treaty limitations did not decrease. Naturally, the predictive estimates of survivability of the Strategic Missile Forces group were at an unacceptably low level.

The solution to the problem of maintaining the required combat capabilities of the Strategic Missile Forces grouping under retaliatory conditions was considered in two directions. The traditional trend, based on increasing the security of silos from the damaging factors of a nuclear explosion, by the period under analysis has largely exhausted the possibilities of practical implementation. In the aggregate of military-technical and technical-economic indicators, the increase in survivability of the Strategic Missile Forces grouping was more effective and feasible due to the creation and deployment of mobile missile systems (RK), primarily soil-based ICBMs, into the combat strengths.

For mobile RKs, the probability of storing a launcher is significantly less dependent on the accuracy of delivery of the warhead than on silo, and its high level is provided by creating uncertainty in the location of the launcher. At the same time, the requirement to create a PGRK based on solid-fuel ICBMs had no alternative, since liquid missiles are unsuitable for land based mobile in terms of their operational properties.

By the time when the need arose for the creation and mass entry into the combat squadron of the Strategic Missile Forces of a mobile soil missile system with ICBMs, our country already had a technical background, experience in creating and operating solid-fuel ICBMs and mobile ground-based RKs. In particular, in the 60-s, the country's first solid-fuel ICBM 8K98P mine-based, and in 70-x mobile ground-based rocket complexes Temp-2С and Pioneer were created and put into service.

The Temp-2С mobile ground-based missile system with solid-fuel ICBM 15Ж42 was developed from the middle of 60-s by the Moscow Institute of Thermal Engineering (MIT) under the supervision of Chief Designer Alexander Davidovich Nadiradze. He was put on combat duty in 1976 in a limited composition - only seven rocket regiments, and he was removed from combat duty under the SALT-2 Treaty at the end of the 70's.

The Pioneer PGRK with a medium range ballistic missile 15ХХNNUMX and its subsequent modifications was also developed with the leading role of the MIT and adopted by the Strategic Missile Forces in the 45 year. The mass deployment of the Pioneer PGRK began with the 1976 of the year in the positional areas previously occupied by obsolete stationary complexes with the P-1978, P-12 and P-14 missiles. By the time of the signing of the Treaty between the USSR and the USA on the elimination of medium and short range missiles (December 16 of the year), more than 1987 launchers of this complex were deployed in the Strategic Missile Forces, and from 400 onwards they were removed from combat duty and were completely eliminated by the middle of 1988.

The development of the complex was carried out taking into account the requirements of the SALT-2 Agreement. In this regard, the 15IX58 ICBM was created as an upgrade of the 8K98P rocket, which imposed certain restrictions on its starting and throwing weight, length and maximum diameter, number of stages, type of fuel, as well as the composition and characteristics of combat equipment. However, thanks to the use of progressive technical solutions, including those that did not have analogues in the practice of world rocket production, a modern missile system was created with high combat characteristics and a significant resource for further upgrades.

The onboard missile control system is inertial, built using an on-board computer that implements direct guidance methods that ensured the current trajectory of the subsequent flight to the point of warhead fall at the current time. The use of the computer system of the control system made it possible to realize one of the fundamentally new qualities of the mobile systems - autonomous combat use of the self-propelled launcher. The equipment of the control system provided for the autonomous conduct of ground-based inspections, prelaunch preparation and launch of a rocket from any launcher patrol route patrol point suitable for the terrain. All operations on prelaunch preparation and launch were extremely automated.

High concealment of mobile missile systems from enemy reconnaissance was achieved by carrying out camouflage measures (using standard means and natural camouflage properties of the terrain), as well as implementing operating modes of mobile units, in which the enemy's space reconnaissance is unable to accurately and quickly track their location (selection of frequency and time of change of parking, the choice of the distance between them and the route of movement).

Flight tests of the Topol complex were conducted at the 53-th state test site (Plesetsk) from February 81983 to December 231987. Development of elements of the complex was carried out in stages. At the same time, the greatest difficulties were associated with the creation of the combat command and control system of the PGRK. After the successful completion of the first series of tests completed by mid-1985 of the year (1985 test launches took place during April 15), in order to gain experience in operating the new complex in the troops, it was decided, without waiting for the completion of the flight test program, to deploy in the Yoshkar-Ola region a missile regiment with limited equipment for combat control. The rocket regiment, equipped with the first mobile command post, was put on combat duty 28 on April 1987 in the Nizhny Tagil region, and on May 27, on missile regiment, the missile regiment with the already upgraded staff mobile command post in Irkutsk was put on combat duty. The missile test launches ended on December 1988 of the year 23, and the final decision on the adoption of the Topol complex was adopted on December 1987 of the year 1.

Part of the Topol PGRK was deployed in the newly created positional areas. After the start of the implementation of the INF Treaty, some of the position areas of the Pioner complexes being dismantled began to be re-equipped to host the Topol missile systems.

Subsequently, the Topol missile system underwent a deep modernization, and on its basis a whole family of more modern PGRKs, Topol-M and Yars, developed and produced by the Russian cooperation of industrial enterprises, was developed.

The modified Topol PGRK missile is successfully used as a special experimental carrier for testing elements of combat equipment of promising and new strategic ballistic missiles.

On the basis of the ICBM of the Topol missile system, the launch space conversion rocket “Start” was also developed, which was launched from the Plesetsk and Svobodny cosmodromes.

Considering the high rates of survivability and effectiveness in various conditions of combat use, the service life of the Topol PGRK has been repeatedly extended, having reached 25 years by now. With a planned sequential replacement of the Topol missile system with new PGRKs, its presence in the Strategic Missile Forces is projected up to 2020 of the year.

Without any reservations it can be stated that during the whole newest stories The Russian Federation, the missile regiments armed with the Topol PGRK, constituted the core of the Strategic Missile Forces grouping, providing a guaranteed solution to the task of nuclear deterrence in relation to the predicted most unfavorable response conditions.

Ctrl Enter
Noticed oshЫbku Highlight text and press. Ctrl + Enter
We are
Missile attack on Europe: myth or reality?Transportation and loading into the mine of an intercontinental ballistic missile of the 5 generation rocket complex RT-2PM2 Topol-M
Military Reviewin Yandex News
Military Reviewin Google News
4 comments
Information
Dear reader, to leave comments on the publication, you must to register.