Army version of the truck "Ural-M"

July 29 2015
46
The Russian Ministry of Defense continues to implement the program for updating the vehicles of the armed forces. Currently, serial construction and supply of cars and the development of new projects are underway. For example, in the future it is planned to begin supplying vehicles of the Motovoz-M family, which will include several basic wheeled chassis of various types. One of the representatives of the new family, which will go into the series, could be the military version of the truck "Ural-M". To date, this machine exists, at least in several copies and has already managed to pass some of the tests.

The promising Ural-M truck belongs to the new Ural-Next family, which in the foreseeable future should replace the existing equipment of the Ural Automobile Plant. Within the “Ural-Next” family, two basic chassis (4x4 and 6x6) have been developed, which can be used as a basis for commercial and military vehicles. Modification of the three-axle all-wheel drive vehicles, designed for the armed forces, refers to the line "Ural-M".

According to reports, the proposed truck "Ural-M" is a deep modernization of the long-known machine "Ural-4320". A promising project provides for the use of a number of new components aimed at improving the characteristics of technology. In addition, some basic structural elements have been improved, which should also affect the performance of the machine. A curious approach to creating a cabin and its equipment was used. The Ural Automobile Plant, part of the GAZ Group, took part in the creation of technology with the general name NEXT. A characteristic feature of all these machines, produced under the new brand, is the use of a unified cab, slightly modified for use on a particular machine. 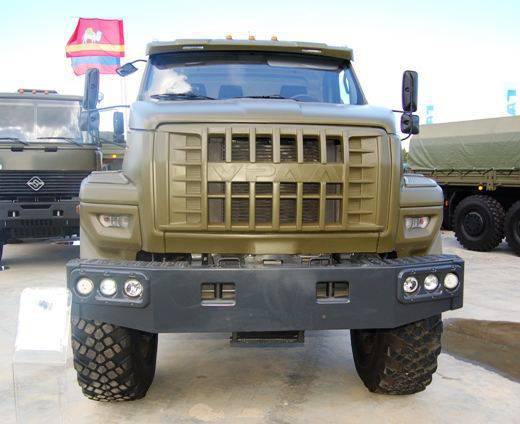 The proposed car "Ural-M" retains the overall layout of its predecessor. It is built on the hood scheme, and all units are fixed on the frame. From the point of view of the general architecture, the new machine differs from the existing “Ural-4320” only in the composition of the used units and the construction of individual parts. Nevertheless, all the improvements used have significantly improved the characteristics of the new machine in comparison with the existing one.

The proposed army of a new model truck has a length of about 9 m and curb weight at the level of 8,25 tons. At the same time, up to 13 tons of cargo can be transported on the cargo platform or in the back. It is also possible to tow a trailer weighing up to 11,5 t. Thus, the gross weight of the loaded machine reaches 21,3 t. By using a three-axle chassis, an optimum axle weight distribution is ensured. So, on the front axle accounts for about 5,3 t, the remaining 16 t - on the rear bogie.

The required characteristics are provided with a diesel engine YMZ-536 horsepower 285. The engine is connected with the YMZ-1105 manual gearbox and transmission, which includes a transfer case with a locking center differential. Used transmission provides transmission of torque to all six wheels. To enhance performance, all bridges of the new chassis are reinforced.

It is alleged that the Ural-M truck, depending on the weight of the load, is capable of speeds up to 80 km / h (according to other data, up to 100 km / h). Power reserve is 1000 km. If necessary, the machine is able to cross the water barrier ford. In this case, the depth of the reservoir should not exceed 1,75 m.

Due to the renewal of the design, it was possible to increase the resource of all systems. So, now it is recommended to carry out maintenance every 15 thousand km (previously this parameter did not exceed 6-8 thousand km). The warranty period has been extended to 2 years or 100 thousand kilometers. Resource design, according to the manufacturer, is 350 thousand. Km.

The upgraded Ural-M car is designed to transport people and goods on highways and off-road in various climatic and meteorological conditions. At the request of the customer, the base chassis can be equipped with bodies of various types, from the side with an awning to metal vans with various special equipment. Shipping can be carried out not only in the back, but also on a trailer. Due to the full load of its own body and towing a trailer, the total mass of the train can exceed 32,5 t.

In the middle of January of this year, there were reports of the beginning of tests of a new truck intended for the army. At one of the automobile testing grounds of the Urals, a new three-axle vehicle was spotted, which was identified as the military version of the Urals-Next. Thus, the tests of a promising military vehicle started no later than the beginning of this year. 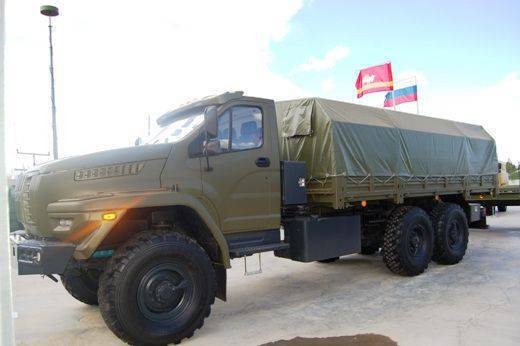 In mid-June, the Ural Automobile Plant announced the start of a run, in which several new Ural-M family cars will take part. From 15 June to 8, the cars traveled several thousand kilometers and reached from Miass to Nyagan, where the rally finished. It should be noted that the vehicles participating in the race belong to the Ural-M family, but the military modification of the truck was not involved in this event.

While other vehicles of the new family marched along the roads of the Urals, one of the new military trucks took part in the Army-2015 exhibition. During this event, a sample of the military "Ural-M" in the army dark green color, equipped with an onboard body with a canvas awning was demonstrated. Visitors to the exhibition may have noticed that the new car retained the used and proven over the years body structure for passengers or cargo, but at the same time received a new three-seater cabin.

The prospects for a military truck based on the Ural-M chassis are not yet fully understood. This machine is currently in testing and, apparently, is not yet ready for full-scale serial production. Ministry of Defense officials have not yet expressed interest in the proposed equipment. However, the first official statements about the proposed truck may appear in the very near future. It remains to follow the news and press releases from the military.