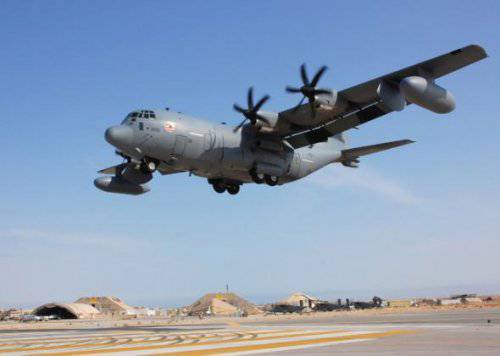 In local conflicts of the last decade with the participation of the United States, the role of special operations aimed at demoralizing enemy troops and the civilian population has significantly increased. The result was achieved by purposefully influencing the consciousness and mentality of people. Such operations are called psychological warfare.

The way of thinking of a modern person is highly dependent on the mass media: television, radio, print media. Therefore, when creating the means of psychological warfare, it is on them that a bet is made. That is, the main weaponsThe “influence operations” are the radio and television transmitters installed on mobile devices. Of the latter, the specialized aircraft turned out to be the most flexible and convenient. He is able to quickly arrive in the desired region and autonomously operate there for a long time, has a powerful power plant, part of the energy of which can be used to power electronic equipment. And most importantly, acting from a great height, it is not only a “winged teleradio studio”, but also a “flying antenna”, which provides good signal coverage even in conditions of highly rugged terrain.

Such specialized aircraft appeared in the late 80-s in the United States. As the carrier of the Air Force, they chose the most massive “transport” C-130 “Hercules”, on the basis of the C-130E model, by that time, “flying command posts” and radio-electronic reconnaissance aircraft had already been created. All three modifications received the same designation - EC-130Е (“E” according to the American indexation system indicates “aircraft with special electronic equipment”).

They can be distinguished only by additional indices: the control plane is designated EC-130Е АВССС (built 8 machines). “Winged propagandist” received the EU-130E RR index and the popular name “Rivet Raider” (“Rivet Raider”), but it didn’t get accustomed and soon changed everywhere (including at the official level) - first to “Volant Solo”, and then on "Commando Solo".

According to the crews, the latter better reflects the specificity of the application: “commando” indicates belonging to special operations forces, and “solo” means that the plane always acts alone.

The transporter as an "electronic" aircraft is good because it has large internal volumes and a hefty power reserve of the power plant. In a spacious fuselage, you can place a wide range of equipment and provide comfortable working conditions for service personnel, and use the power reserve to generate electricity for very “voracious” transmission stations (both interfering and broadcasting stations).

The EU-130E RR in the middle of the 90-x has undergone several upgrades and in the current version of the Commando Solo II has a set of equipment for broadcasting in a wide range of frequencies and broadcast TV programs in the worldwide color WWCTV format. Six transmitters operating in the 450 kHz to 350 MHz range emit signals using 9 transmit antennas installed throughout the aircraft. 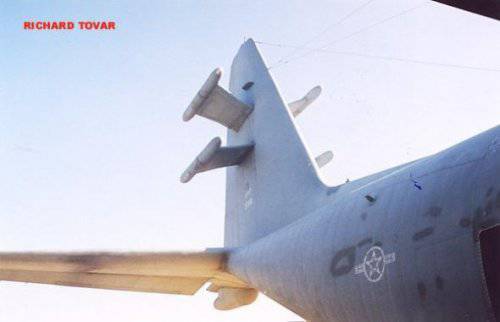 Thus, the longitudinal wire antenna above the fuselage provides maximum broadcasting power in the lateral directions, and a complex of four television antennas on the keel - in the downward direction. A variable-length transceiver antenna produced from the tail coca is designed for particularly fine-tuning of the signal parameters - in particular, the quality of the “picture” on television screens depends on this.

Eight radio receivers operate in an even wider range - from 200 kHz to 1000 MHz. The radiation they capture is fed to an 4 frequency spectrum analyzer that determines the parameters of the received signals and allows you to fine-tune your own transmissions to the frequency of the enemy’s radio and telecentres.

The equipment also includes two communication radio stations (AN / ARC-186 and AN / ARC-164) with the KY-58 security classification equipment and the direction finding system of the enemy's operating stations. The aircraft’s radar warning equipment AN / AAR-47 with a trap shooting system to protect against missiles with both thermal and radar homing heads and infrared jammers AN / ALQ-157 are installed as defensive equipment on the aircraft. 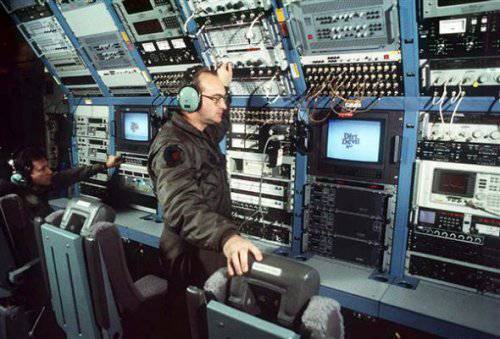 The crew consists of two pilots, a navigator, an officer - the head of the operation and seven specialists: an engineer, a specialist in electronic equipment and five operators.

As a rule, Commando Solo arrived in the zone of imminent conflict even before the military phase began, in order to determine the operating frequencies of military lines of communication and broadcast television and radio stations of the enemy in a calm atmosphere. After studying local problems, a general strategy of psychological operations was formed, and concrete studios aimed at specific social groups were prepared in ground studios. Then they were broadcast in all languages ​​spoken in the region.

"Commando Solo" usually broadcast from a maximum height, flying in a closed elliptical trajectory. This achieves the best "coverage" with the signal, since the most powerful radiation is directed down and to the side of the aircraft. In the event of a possible fire counteraction, the broadcasting zones were located along the borders, beyond the reach of air defense weapons (Yugoslavia, Iraq). In the absence of a threat (Panama, Haiti, Afghanistan), the aircraft operated directly over the territory of the country. 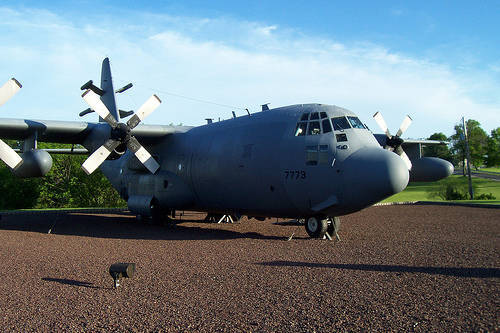 By occupying a train in the zone, the EU-130E turns on the receivers and releases the tail antenna. After fine tuning for the bands used by the army, local radio and television, Commando Solo begins broadcasting its own broadcasts, on several waves at once. The broadcast is conducted live, recorded, or retransmitted, as one officer of the 193 Squadron said, “we can receive the President’s speech from the White House via satellite and immediately broadcast it live.”

Not forgotten, and the press - over densely populated areas practiced dumping leaflets. The in-flight refueling equipment allows you to stay above the 10-12 broadcast area continuously.

During its existence, 193 Squadron managed to “work” on most of the known “hot spots”. For the first time, its "flying telecentres" were going to be used against Iran during the liberation of hostages from a seized embassy, ​​but because of the breakdown at the initial stage, the operation was canceled. But in "The Tempest in the Desert." The EU-130 has already been processing Iraqi from both sides at the same time - from Turkey and Saudi Arabia. Their programs, known as the Voice of the Persian Gulf, contributed to the mass surrender of Saddam Hussein’s soldiers. 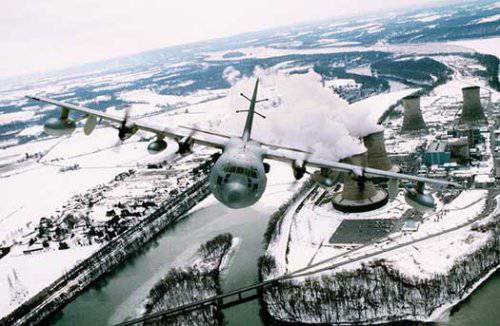 In 1994, Commando Solo was used during a democracy support operation in Haiti, which broadcast to the civilian population. “Psychological operations” with the participation of the EU-130E were also carried out in Grenada, Panama, Yugoslavia and Kosovo.

In Afghanistan, the Commando Solo launched a battle for the minds of Afghans from Saturday October 20, after two weeks of intense “brain shake” with bombs. In the gears between music and the news the thoughts about the imminent defeat of the Taliban and requests to stay away from their positions and military facilities were unobtrusively implanted. But on-board television transmitters were left unused here - the Taliban banned television back in '96 as contrary to the Koran. 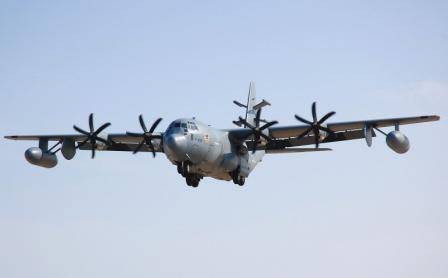 The effectiveness of radio propaganda can be indirectly assessed by the speed of defeating the Taliban: they lost the capital and 25 provinces from 30 in a week's ground operation, and only two weeks later remained in the caves, and this was not very active in attacks ten times smaller in size than the forces of the Northern Alliance!

In addition to its direct purpose, psychological operations -ECNOMXE can be used as an electronic intelligence and electronic warfare aircraft, to disrupt the operation of communication systems, television and radio broadcasting of the enemy.

On the basis of the “Hercules” of a new generation - C-130J, which received new highly efficient engines and ultra-modern avionics, two more aircraft were ordered for “psychological operations”. The first EC-130J RR received in 2000-m, the second - in 2001-m. The third one was ordered in 1999 with delivery time in 2002.

As the experience of the application showed, the practically unarmed (in the conventional sense) “Commando Solo”, in their combat effectiveness, turned out to be better than the strategic bombers. Bombs with B-1, B-52 and even the most modern and fabulously expensive B-2 just killed the soldiers and officers, to which they quickly get used to the war. The EU-130E transmissions crushed the most important thing - the belief in the goals of the struggle and in the coming victory, without which any army loses the will to resist. 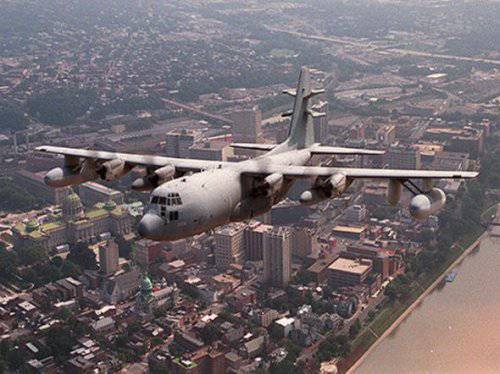 The 193 Squadron is also armed with four EU-130 (CL) (“Comfi Levi”) airplanes, one of the most secret Air Force planes known as “Senhor Hunter”, “Senhor Scout” and “Comfi Levi”. One of these aircraft was shown publicly only once - at the Paris Air Show 1993. At the same time, its official purpose was indicated - radio interception and jamming of enemy radio communications. The 193 Squadron is supplied only by EC-130 (CL) flight crews, while radio specialists are assigned by the Electronic Security Command deployed at Fort Meade. The same command is responsible for decrypting and analyzing intercepted messages. It is reported that the EU-130 (CL) airplanes are practically distilled at Andrews Air Base almost before each mission departure, where special equipment is installed on them, which is dismantled after the flight there. 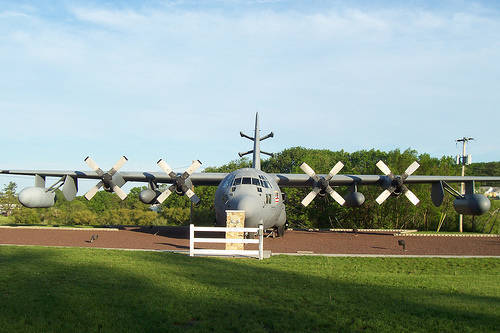