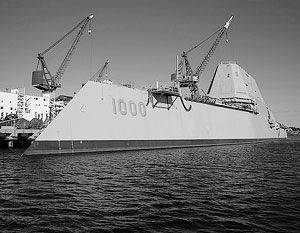 For five years, the US is upgrading fifty of its missile defense system ships. As the head of the 4 division of the Central Research Institute of the Ministry of Defense of the Russian Federation, Oleg Pyshny, stated, this is a threat to Russia, and it will respond with “adequate technical measures”. Indeed, the arrival of a modernized destroyer in the Black Sea will double the potential of NATO missile defense. But such ships have an obvious weakness.

Now the Aurliegh Burke class destroyers are the newest (built since 1988), the most modern (fourth generation) and the largest class of surface ships in the American navy (62 in service, planned 75). In addition, it is the largest large surface ship (more than 5000 tons) for the entire history after World War II. “Arly Berki” became a kind of standard of this class of ships, on which potential competitors and allies orient themselves to the best of their abilities. Its main task is to provide anti-aircraft and missile defense (air defense and missile defense) in all types of operations, from escort escort to landing. Meanwhile, until very recently, a large-scale program of their modernization was in doubt because of the possible appearance of ships of the fifth generation. But this did not happen, and the American fleet returned to the “Arly Burke”.

The program of modernization of this series in competition won two parallel programs of completely new projects of destroyers of the futuristic direction - Zumvalt, formerly known as the project DD (X) and DD-21, whose financing was terminated by Congress due to inflated costs. The Zamvolts were conceived as something promising, a kind of ship of the 21st century with a corresponding appearance and revolutionary technologies (especially the engine and combat systems). Like all military orders (Russia is not an exception), the cost of its production grew during construction, and from the original idea of ​​"transplant" the entire American fleet to "ships of the future", which even look like a mixture of an alien spacecraft with a "computer" device the game, degenerated into the construction of a single vessel, which was even officially declared as "demonstration". In total, 2,6 was allocated a billion dollars for the construction of two Zamvolts, one of which was launched in 2013, but it still stands without a name, it was planned to be commissioned this year, but it is not clear whether it will take place. But it is clear that the cost of each ship will eventually grow to 3,2 billion, and ensuring their life cycle to 4 billion dollars. It is noteworthy that the money was divided in half between the two construction corporations, and the second, Norton Grummann, should hand over the second destroyer in the 2016 year, but this is not a fact.

“Zamvolts” should become the prototype of an “all-electric ship”, where the primary diesel-gas turbine engine will provide all the systems. This is a truly revolutionary approach, although it was originally intended to build these models on nuclear warheads. “Zamvolty” is completely covered with a layer of radio-absorbing materials an inch thick, and the level of process automation reduces the crew size by more than half compared to the same “Arly Berks” - to 140 – 150 people at about 300 on Berks.

The House of Representatives finally went berserk when it became clear that the “ship of the future” Zamvolt was intended mainly for the coast guard and was part of the littoral ships program - ships of the coastal zone. That is, it cannot carry out the functions of military escort in the open ocean. So promising programs were frozen, and attention shifted to Arly Burk.

On the whole series of “Arly Burke” (especially on the last - fourth - modification) all weapons systems will be upgraded and all previously identified design flaws will be eliminated. For example, after the explosion of the Cole in Yemen, it was discovered that there was no armor protection on the ship. There is also no mine protection, which suddenly became clear during the visit of one of the “Arly Berkov” to Sevastopol in Ukrainian times. Then, right in front of him, a German mine of the times of the Second World War (the classic one with “horns”, the TNT equivalent of approximately 45 kg) emerged, which caused panic. Mine sapped the sappers of the Russian Black Sea Fleet. Cole, on the other hand, was blown up by the equivalent of 200 – 250 kg and was completely out of order, and its repair cost 250 million dollars.

As for the replacement of weapons systems, the emphasis is on anti-ship missiles, which were previously of secondary importance simply by the status of the ship. New missile systems will be able to fire at over-the-horizon targets at a distance of 63 nautical miles (more than 100 kilometers). This, in theory, will allow them to fire at ground targets outside the coastal artillery, that is, the "Arly Burke" will be able to support amphibious operations.

But the main purpose of the destroyers of this series is the air defense. Those modifications that cause the greatest interest in Russia are associated with the re-equipment of air defense, which, with a certain tension of forces, is already turning into missile defense. The refusal of the US Navy to build larger URO ships (approximately called missile cruisers) turns the Arly Berki into its own number of “universal soldier”: there are many of them, they are smaller than cruisers in size, although they remain the largest ships of these classes since World War II , but at the same time, after a modernization, a separate destroyer is being converted into a missile defense platform.

Thus, the United States will be able not only to create stationary missile defense systems in Romania and Poland, but also to simply move the Arli Berkov 50 across the world ocean, each of which is turned into a mobile air defense and missile defense complex, approximately equal to, or even superior to, a number of ground systems. The new Standard-3 SAM systems were initially tested on missile cruisers, but then were redirected to Arly Burk. They can even shoot down satellites (a successful test was conducted in 2008 with two destroyers Russell and Decater with the participation of the cruiser Lake Erie).

The arrival of such a destroyer in the Black Sea will double the potential of NATO missile defense, including in the missile-strategic, nuclear component. At the same time, the modernization of “Arly Berkov” with over-the-horizon rockets will allow them to clash with defensive systems, such as the Crimea. That is what colonel Oleg Pyshny meant when he spoke of the threat to both the “maritime component and the Strategic Missile Forces”.
Another thing is that the weak side of Arly Berkov was and will remain a radar system, the modernization of which is not provided for by the budget. That is, with all its protection, not one of the “Arly Berks” in the near future will be able to effectively assess the threats it receives and at the same time respond to several of them. If such a ship is given the task of stopping the launches of ground-based ballistic missiles, it is able to miss aviation threat or actions of submarines, especially in a limited body of water. In the Black Sea, for example, they will become a target for long-range coastal complexes in combination with strategic and even front-line aviation. And in the open ocean (in the Arctic, for example) there are submarines, against which the “Arly Burke” is rubber ducklings. Billions of dollars, tucked into the mine and anti-bomb defense after the incidents in Yemen and Sevastopol, went nowhere. This is “protection from the fool”, but not from the Russian army and the Navy, if the US Navy considers them their potential adversary.

At the same time, Arly Berki still remains the newest in time, but still quite an old-fashioned tool through the use of "ordinary" ship control systems. Hence the high crew size. Suffice it to say that out of the 25 millions of dollars a year going to each such ship, 13 millions are spent on salaries. Reducing the number of crews at 100 people is possible by increasing automation, but this process is two-edged, because it will require an increase in funds for training, and the salary of the new crew will increase by increasing its skills.
Modernization of “Arly Berkov” is a budgetary way for the USA to create a new ship class, without creating, in fact, anything new. At the same time, hanging on the "Arly Burke" rocket weapon support of the landing instead of air defense systems and missile defense, the Americans abandon one of the fundamental principles of building the structure of their fleet - a narrow specialization of ship classes. “Tomahawks” are becoming “optional” weapons for ships, although they were the main striking force in Iraq and in Yugoslavia. There is no need to talk here about a breakthrough in fleet modernization, although the creation of such independent air defense and missile defense platforms will create some problems for the defense strategy of the Russian Federation. Not critical problems.

This does not negate the fact that the modernization of "Arly Berkov" means the end of the concept of building futuristic ships of the future. With all due respect for the design ideas and financial capabilities of the United States, such a “breakthrough into the future” turned out to be too expensive for them and not commensurate with the initial swing.