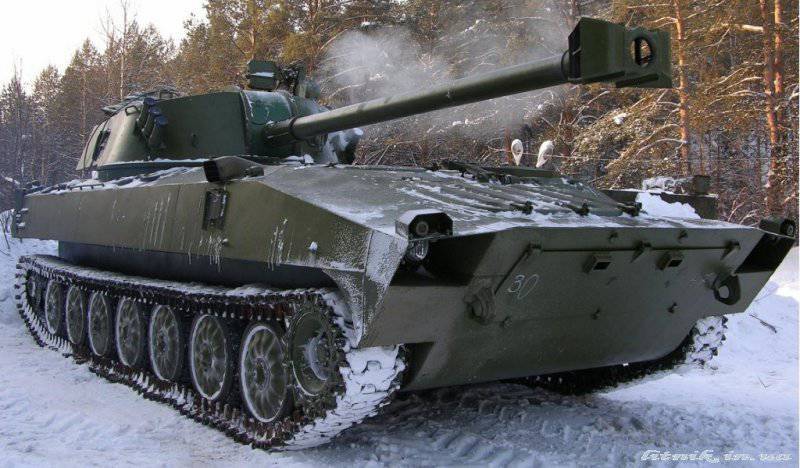 CJSC 234 "Khosta" was designed at the Motovilikha plant in Perm. In essence, this is the same ACS 2C1 "Carnation", but has undergone a major upgrade. According to some reports, the release of 2C34 started in the 2003 year. The crew consists of four people, sheet armor, rolled, combat weight is 16 tons. Armament: 2А80-1 cannon with vertical pointing angle from -2 to 80 degrees and 7,62 PKT machine gun mounted on the roof of the turret. In terms of its technical characteristics, the Carnation was a pretty good, unpretentious and reliable fighting vehicle, but today the 2C1 is certainly outdated. 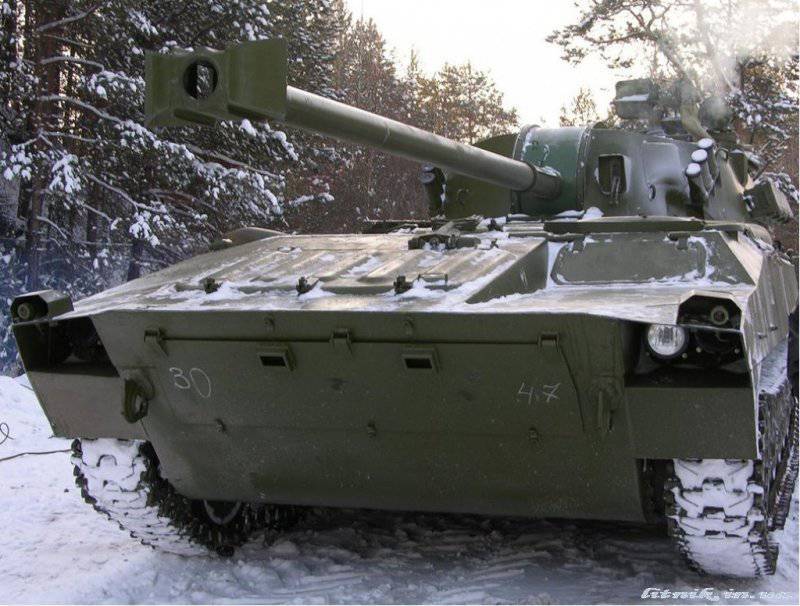 The undercarriage of the new “Hosts” BS 2С1 (advanced BS МТ-LB) was inherited from the same “Carnation”, it was only installed new armament, in the new turret of circular rotation units and aggregates were used, some innovations and developments are present on the “XA "Based on the BMP-2, 31C3" Nona "SVK and experimental" Object-2 ". An advanced 23А118 - mm mm 2 semi-automatic rifled gun-howitzer-mortar 80А120-2, equipped with a muzzle brake, is also installed. Unlike 80А1, which has almost twice the rate of fire and the ability to fire all types of 2 mm projectiles, at a distance of 80 km. High-explosive shells and mines also provide for the possibility of firing modern XNUMVBOX120 “Kitolov-13” projectiles with a passive homing head that receives the reflection signal of a laser target designator, with the exception of the cumulative 3BBC112 projectile. Shooting can be conducted without prior training, as from closed, half-closed and open positions with direct or semi-direct fire, in addition, Khost is capable of destroying targets on the reverse slopes, which is an important factor in combat operations in mountainous or hilly terrain. 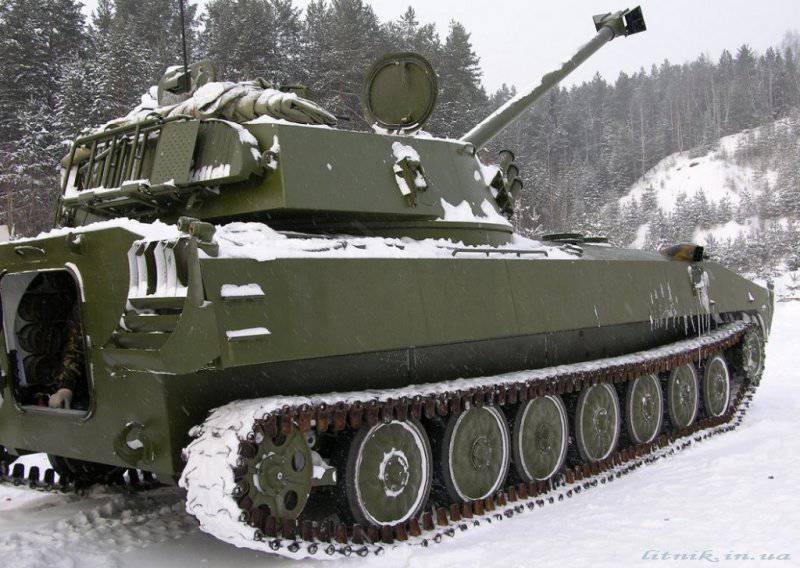 The upgrade also touched the electronic filling of the new 2-34, although the complete set, in order to reduce the total cost of production, will be installed only on vehicles of battery commanders and above. The rest of the CAO will be without ASUNO (this sometimes amounts to 50% of the total cost of the machine), which makes Khost much cheaper to produce and, therefore, more attractive to the global arms market. But at the same time, with lower combat qualities than, for example, the very very expensive, but more modern CAO 2C31 “Vienna”, which, among other things, can even use NATO ammunition for firing. But its release, for mysterious reasons, is practically curtailed in favor of simpler and outdated, but in demand (mostly developing third world countries) on the world arms market, cheap samples. Here is such a budget version of the combination of 2C23 "Nona" and 2C1 "Gvozdika", although the modern Russian army, the army of 21-th century need more modern and high-tech machines. Calculated not on the external market and created taking into account the purchasing power of potential customers, but focused primarily on strengthening and enhancing the defense capability of their country. 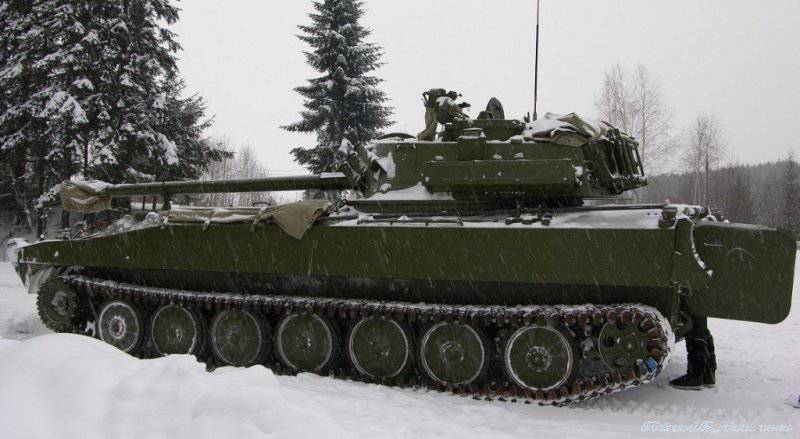 Nevertheless, the market dictates its own conditions, the plants of the defense industry of Russia survive as they can, and Khost 2C34 "Khosta" begins to enter the troops, but so far it is difficult to talk about its fighting qualities, the more there are, as already mentioned, two options for equipment and configuration cars. If we consider and evaluate the “commander” option, then this is certainly a formidable fighting machine, given the maneuverability and driving characteristics of the chassis “Carnations”, which showed themselves from the best side during the war in Afghanistan. According to the memoirs of the crews, participants of those events, who warmly responded to the “sauska” and noted the simplicity, reliability and durability, coupled with the extraordinary stability of the armored corps to undermining anti-tank mines. New weapons, plus equipment for automated control systems (automated guidance and fire control systems) will allow the most complex combat missions to be carried out in a modern war, but the budget option is inferior in many respects to these characteristics, and this, unfortunately, is a large part of the machines. As we remember in stories, at one time, radio stations were also installed not on all machines of the prewar period, what it led to and what price it was paid for in the initial period of the Great Patriotic War, we all know. 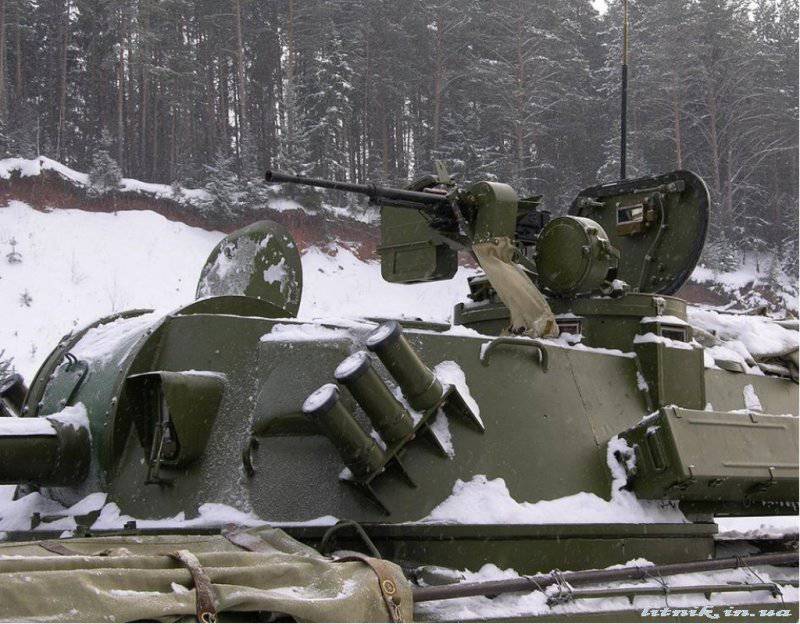 For now, the claims of some sources that - “... the efficiency of the machine is three times higher than that of the non-modernized ...”, to put it mildly, raise great doubts. Do not forget that this is still not a new car, but a deeply modernized old model of the ACS developed in the USSR.

We are in Yandex Zen
Self-propelled artillery 2C34 "Khost"
New ground artillery weapons
18 comments
Information
Dear reader, to leave comments on the publication, you must to register.