July 16 2015
10
When it comes to long-lived aircraft, the first models that come to mind military connoisseurs aviation, Are the Tu-95 and B-52 aircraft. You can find a lot of information about these strategic bombers today, but on these long-lived planes историяOf course, does not end there. In general, it is worth noting that the 1950-1960-e were really rich in long-playing aircraft platforms. One example of such aircraft is the American KC-135, the conversion version of the exceptionally successful civilian airliner B-707, which made its first flight in the distant 1954 year. Boeing’s data have long since gone from commercial airlines, but their military version still rises into the sky and their operation is unlikely to end in the next decade.

The Boeing KC-135 Stratotanker is a four-engine jet specialized multi-purpose military transport aircraft that was designed at the beginning of the 1950's. Boeing's KC-135A tanker aircraft was designed to refuel in the air tactical and strategic aircraft. The car was created on the basis of a successful passenger liner Boeing 707. Instead of a passenger cabin in the plane, a cargo cabin with a reinforced floor was equipped, which could carry up to 22700 kg of various cargoes or 80 soldiers with full equipment. The first flight of the prototype took place in August 1956. In total, 1955 KC-1965 aircraft of various types were built during the production from 820 to 135. In the 1982, the KC-135R version was developed, which received an increased supply of fuel and new engines, as well as a second auxiliary power unit, a new enhanced chassis and upgraded on-board equipment. In 1984, the United States began the process of re-equipment of all previously released KC-135A aircraft according to the KC-135R standard. 11 of such refitted machines in 1985-1988 were transferred to France, where they received the designation KC-135FR.

The KC-135 was originally designed to extend the range of strategic bombers of the B-52 type. For these purposes, a remote-controlled telescopic rod was created, having an 14,3 meter length. Initially, approximately half of the tanker’s onboard fuel was transported (43 500 kg). Deliveries of new aircraft to the USAF Strategic Aviation Command (SAC) at the Castle Air Base in California began as early as June 1957. In the future, the aircraft planned upgrades, which significantly increased their performance. 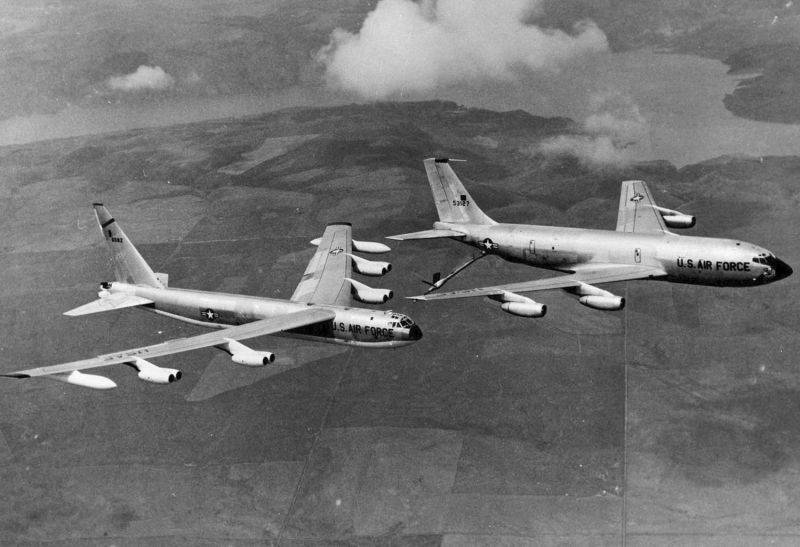 On the basis of this machine in the United States, various modifications were built: reconnaissance aircraft, weather reconnaissance systems, reconnaissance systems of the enemy’s electronic equipment, air command and control posts and communications with strategic nuclear forces, research aircraft. At this point in time, a substantial part of the KC-135 aircraft built and its various modifications continue to fly. The US Air Force plans to use these machines for a long time, it is planned to operate some aircraft up to the 2040 year.

Also in the US, the RC-135 version was widely used, which was an electronic reconnaissance aircraft. This plane was a little longer. The lengthening of the nose of the aircraft on the 135 meter, characteristic of the RC-2,28S / V / W models, was due to the installation of an additional antenna for the electronic reconnaissance (RTR) system. The antennas of the RTR systems, including the automatic direction finding system of the radiation source, were located under the fairings of the forward fuselage of the RC-135 aircraft. And in the convex compartments with an area of ​​8,6 square meters each, along the sides of the fuselage in the forward part there were interferometers and superheterodyne for analyzing and decoding the signal. Numerous antennas of automatic programmable receivers, amplifiers, and detectors were also located in these compartments - in total, they covered most of the range of electronic signals that could be intercepted. 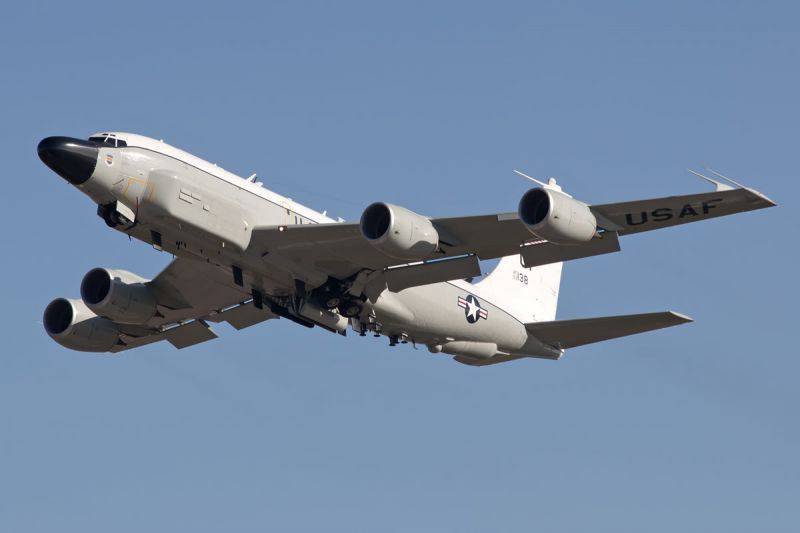 The distinctive features of the aircraft KC-135 include the fact that this is the world's first high-volume specialized jet tanker aircraft, as well as the fact that this long-lived aircraft may serve in the US Air Force to 80-85 years. Such long-term operation is confirmed by the data replacement program of the aircraft. In March, the United States Air Force 2011 signed a contract with the Boeing aircraft manufacturing concern for the supply of new KC-46A aircraft tankers. According to the contract, the military must receive the first 18 aircraft to the 2017 year. After that, the US Air Force plans to place an order to build additional aircraft. In total, by the year 2027, the Boeing concern will have to supply the US military 179 with a new type of refueling aircraft. As in the case of the KC-135, the development of the new KC-46A tanker aircraft is based on the passenger airliner B767-2C. As part of the US Air Force, they will replace the obsolete KC-135 Stratotanker. Aircraft KC-46A will be able to reach speeds of up to 920 km / h and fly to a distance of 12 200 km. The fuel capacity of the new aircraft will be equal to 92 tons.

The KC-135 is a four-engine jet aircraft, built according to the normal scheme with a low-lying (low-wing) two-spar wing and single-fin tail. Mechanization of the wing includes double-slot flaps and nasal root shells. The heel-free roll is controlled using aileron located at the end and on the half-span of the wing, as well as interceptors, which also perform the role of air brakes on the aircraft. The original glider life was 13 000 hours, but in 1975-1988, work was done to replace the underside of the wing to bring the glider to 40 000 hours and extend the life of the aircraft to at least 2020. The aircraft is equipped with a three-bearing landing gear with a hydraulic system of cleaning-release. The main racks are equipped with four-wheeled carts, the nose strut of the chassis is two-wheeled, made manageable.

The fuselage of the KC-135 semi-monocoque type with a cross-section in the shape of two intersecting circles. The crew cabin is triple, in the main cabin it was possible to place loads of up to 22,6 tons, as well as landing troops up to 80. A cargo door was made on the left side, measuring 2,89x1,98 meters. The crew of the tanker got into the car through the hatch opening down and forward, equipped with a retractable stepladder. It was located on the left side in front of the nose of the chassis. "Passengers" got into the plane through the cargo door, which could open up almost 180 degrees. In the doorway of this door it was possible to install a folding crane, which allowed, in case of need, to load oversized cargoes without the use of ground equipment. In particular, it was easy to load a spare engine on the plane, which could be useful when placing the aircraft on the advanced airfield. 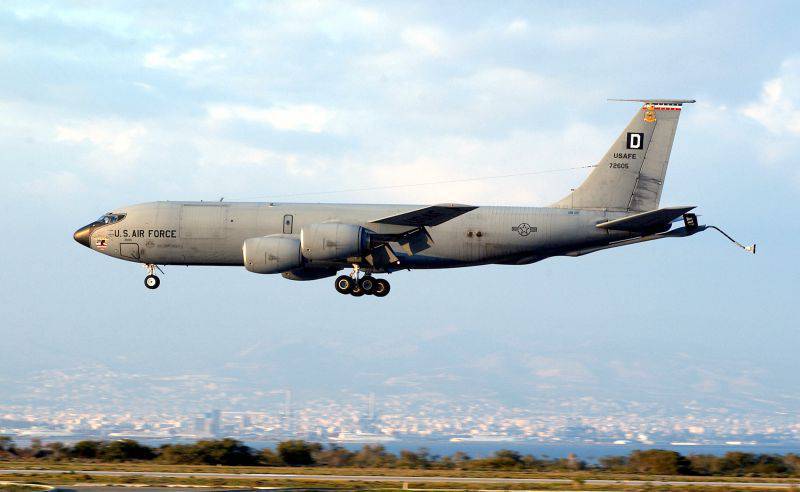 In the rear fuselage was equipped with a refueling system operator's cabin with a rear hemisphere view window. In the initial position, this window is closed by a fairing that retracts into the aircraft fuselage. Under the fuselage behind the nose landing gear there were two rows of signal lights - “traffic lights”, which informed the pilot of the vehicle being filled about the progress of fuel pumping. Also, originally along the “belly” of the tanker aircraft, a strip of poisonous yellow color was placed, which was supposed to help the pilot of the refueling plane precisely maintain the course at the time of refueling.

The original version of the KC-135A tanker aircraft was equipped with four Pratt-Whitney J57-PW-59 engines, which were located on the underwing pylons. On the KC-135R version, CFM F108-CF-100 engines appeared on the aircraft, with increased thrust (9985 kgf) and a quarter efficiency increase. Version of the aircraft KC-135R compared with its predecessor KC-135A, according to the information of the Boeing company, received a large take-off weight (146,3 tons) and is able to transfer more fuel to the 65% at a distance of 2775 km from the airfield based on 150% more fuel distance in 4630 km. At the same time, the takeoff distance of the aircraft was reduced, which is now 2620 m. In addition, we managed to reduce the maximum noise during takeoff - from 126 dB to 99 dB.

On the KC-135R aircraft, fuel is placed in wing tanks and two compartments located under the floor of the main cabin with a total capacity of 118 240 liters. At the rear of the fuselage there is a small reserve tank for 3800 liters of fuel. Aircraft refueling in the air is performed by the operator using a telescopic rod located in the rear fuselage of the aircraft. With the help of this boom one aircraft can refuel, the transfer speed of fuel 3400 l / min. You can use the intra-fuselage fueling unit with a flexible hose. In flight, the refueling bar is pressed down to the fuselage. 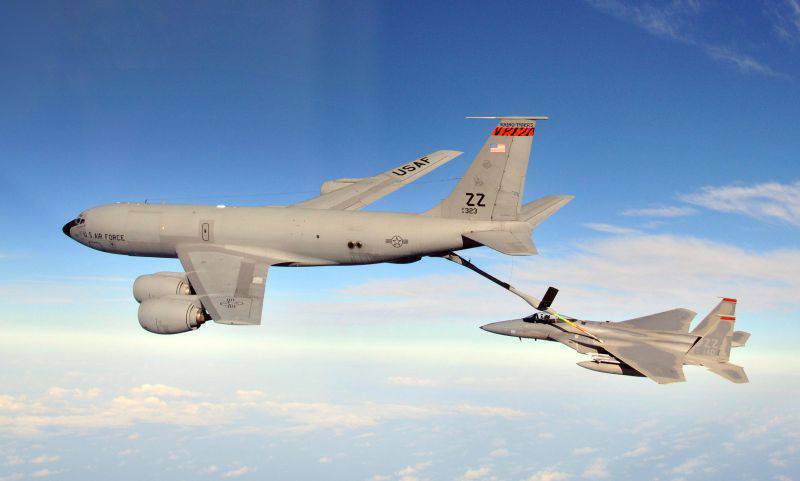 The length of the telescopic bar for refueling varies from 8,5 meters in the folded position to 14,3 meters in a fully extended state. The boom can be controlled by the operator in two planes with the help of two aerodynamic control surfaces, equipped with a hydraulic actuator. It is distinguished by the following deflection angles: in the vertical plane -20 ...- 40 degrees, in the horizontal plane 15 ...- 15 degrees or 20 ...- 20 degrees. The performance of the filling system is different. Under normal operation - 2800 l / min, when refueling strategic bombers - 3400 l / min. On the KC-135R aircraft version, the refueling speed has been increased to 4540 l / min. During refueling, the operator is located in the supine position and directs the actions of the crew of the aircraft being refueled when it is established and during its contact with the tanker aircraft by radio or by using signal lights. 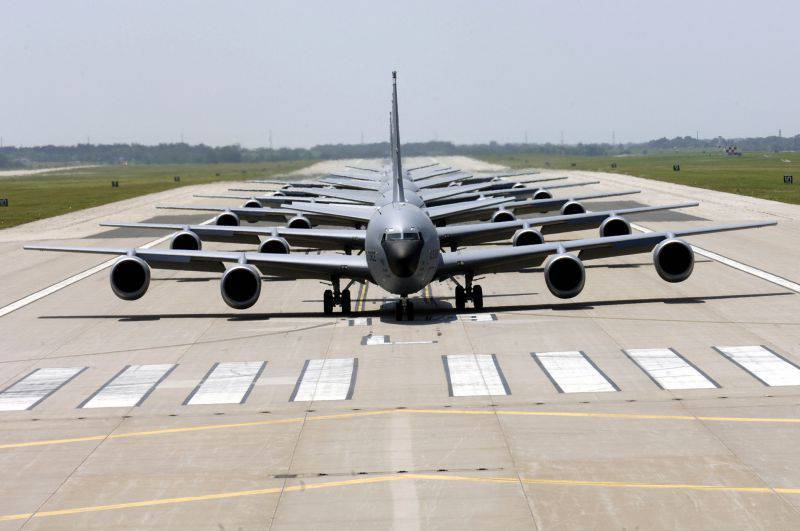