July 16 2015
52
Since the early seventies, the Soviet and Russian armies have been equipped with self-propelled artillery 2C1 “Gvozdika”. This self-propelled gun with 2А31 X-gun caliber 122 mm is designed for the destruction of manpower, equipment and enemy objects, as well as complements other self-propelled guns of other types. For two decades, several thousand such combat vehicles were built, most of which still remain in service. However, by the beginning of the two thousandth years, the military came to the conclusion that it was necessary to replace the “Carnation”. This is how the Khosta 2C34 project appeared.

The decision to develop a new project was made in 2003 year. The military ordered the creation of a deep modernization of the existing ACS 2C1. Initially, the new project had the designation 2C1M, associated with its main task - to update the existing self-propelled gun. However, further in the new project such number of innovations was introduced, that its index was changed to 2С34. Also the project was designated by the code "Khost". The Perm enterprise Motovilikha Plants became the lead developer of the new project. In addition, the Petrel Research Institute was involved in the work.

According to the available data, the original technical task implied the creation of a new modification of the self-propelled 2-1 “Carnation” using the new weapons and fire control equipment. For this reason, it was decided to rework only the combat compartment and the machine tower. The tracked chassis was proposed to be left unchanged, which further affected the fate of the project. Thus, self-propelled artillery gun (SAO) 2-34 "Khosta" is a new fighting compartment with a gun mounted on the chassis of the base machine. 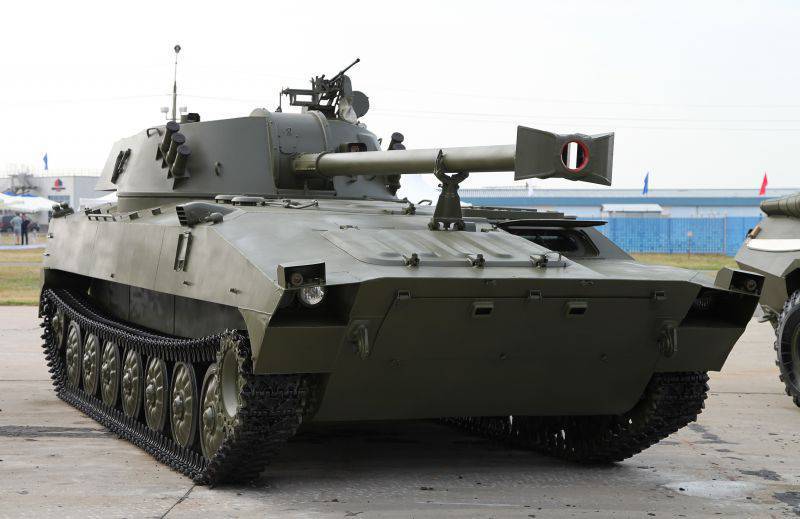 The CAO 2X34 chassis has retained the previous layout, traditional for Russian self-propelled guns of recent decades. In front of the case, with a shift to the starboard side, is the engine compartment. To the left of it is the office of management with the workplace of the driver. The middle and aft of the hull are given under the fighting compartment. On the roof of the case there is a shoulder strap for installing the tower. The body of the combat vehicle is welded from rolled armor plates up to 15 mm thick, providing protection from small arms bullets and shell fragments.

The basis of the power plant chassis "Hosts" is a diesel engine YMZ-238H horsepower 300. The engine is connected by a mechanical double-flow transmission with planetary friction turning mechanisms. There are six forward gears and one rear. As part of the chassis there are seven road wheels with a torsion bar suspension on each side. Several rollers are additionally equipped with hydraulic shock absorbers. Due to the front location of the engine, the drive wheels are located in the forward part of the sides, the guides are in the stern. There are no special supporting rollers, as the upper branch of the track lies on the support rollers.

The body length of the 2C34 self-propelled gun is 7,57 m, the width is 2,85 m. The total height of the vehicle over the turret roof is 2,83 m. The combat weight is 16 t. per ton, which allows it to reach speed (on the highway) to 18,75 km / h. On rough terrain, the maximum speed is twice as low. Due to the sealed hull, the CJSC "Khosta" can cross the water obstacles by swimming. In this case, the movement is carried out by throwing the tracks. Water speed does not exceed 60-4 km / h. When driving on a highway, the fuel range reaches 4,5 km.

The middle and the aft part of the self-propelled gun hull is occupied by the fighting compartment with a rotating turret. It is located weapons, ammunition and fire control equipment. In the central part of the frontal sheet of the tower, a window is provided for the gun and its mask. The installation mechanisms of the gun allow you to fire with an elevation angle from -2 ° to + 80 °. Horizontal guidance - circular. On the cheekbones of the tower there are smoke grenade launchers. On the roof there is a turret for a machine gun designed for self-defense.

To improve the performance of the new combat vehicle, it was decided to replace the main gun. Instead of an 122-mm rifled howitzer 2A31, the 2A80-1 caliber 120 mm is now used. This gun combines the basic functions of guns, howitzers and large-caliber mortars, which, as expected, should have led to a significant increase in combat performance. A characteristic feature of the new instrument is the muzzle brake of a recognizable form. In addition, the gun is equipped with special anti-recoil devices that allow firing in a wide range of elevation angles, both direct fire and "mortar". Inside the fighting compartment is placed ammunition from 40 shots of various types.

The gun for the Khosta machine is an upgraded version of the 2А80 cannon used as part of the Vienna Automobile 2C31. Due to this, two self-propelled guns can use the same ammunition of various types. Self-propelled gun 2С34 can fire high-explosive, thermobaric, incendiary, lighting, cluster, etc. shells. At the same time, however, unlike the "Vienna", "Khost" can not use armor-piercing cumulative projectile 3BBK14. 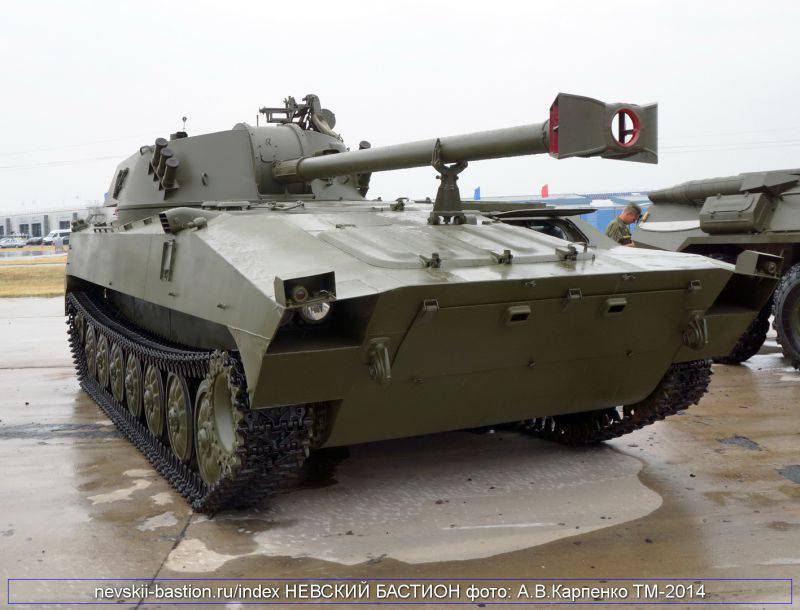 The 2А80-1 can fire direct fire or from closed positions. Through the use of different firing modes, effective destruction of targets is achieved at ranges up to 13 km, depending on the type of projectile and some other parameters. Accuracy of hit depends on ammunition. Thus, the range of used shots includes several guided projectiles, which can significantly reduce the consumption of ammunition to defeat a specified target.

In addition to the new weapons, upgraded fire control equipment is used to enhance the shooting performance. It is known that there are two variants of the fire control system (LMS). A full version of the so-called. automatic guidance and fire control system (ASUNO) and its simplified version. According to reports, a full-fledged version of the OMS is intended for command vehicles, which must process the available information and target it to other self-propelled gun batteries. The latter, in this case, can use a simplified version of the OMS, which is able to execute commands and solve tasks without complicated calculations, etc. operations.

The operation of the Khost 2C34 "Khosta" is carried out by a crew of four. The driver is located in front of the armored hull, to the left of the engine. The commander, gunner and loader are in the tower. At the disposal of the latter there is a complete set of equipment for controlling the systems responsible for firing at the chosen targets.

The development of the project 2С34 was completed by the year 2008. Shortly thereafter, Motovilikha Plants, together with some related enterprises, began to manufacture new equipment. After some time, new combat vehicles came to the test, and then were transferred to the troops to check during operation. The troop tests were carried out by a self-propelled artillery battery of the 1 th motorized rifle battalion of the 21 th separate motorized rifle brigade (Orenburg Region).

The high hopes were pinned on the new self-propelled gun. It was expected that the equipment of the spent chassis with a new combat compartment with a universal weapon would significantly increase the combat potential of artillery units. However, in the course of military tests, some serious shortcomings of the resulting machine were revealed. The main ones were associated with the used chassis. In the autumn of 2012, it became known that the design approach with the extensive use of ready-made units had an effect on the real characteristics of the Khosta AO.

According to the domestic press, the new self-propelled gun during the tests showed insufficient stability and rate of fire. So, due to the use of the old chassis, developed without taking into account the features of the new gun, the Khosta open joint stock company swayed with great elevation angles during the shooting, which affected the accuracy of shooting. Similar problems were mainly observed when firing in the “mortar” mode, since the return in this case is higher and has its own specificity of distribution among the aggregates of the machine.

The lack of stability of the chassis also affected the rate of fire. Because of the need to make new amendments and the difficulties with loading the gun in the rocking machine during the tests, it was possible to fire at a rate of no more than 3-4 rounds per minute. For comparison, the 120-2 “Sledge” towed by the 12-mm mortar, due to a more accurate distribution of the recoil momentum, can produce up to 10-12 shots per minute.

Also in November 2012, domestic media reported that by the time News Motovilikhinskiye Zavody enterprise did not receive any official documents about any problems during the tests about the problems of the Khosta Jsc. At the same time, however, representatives of the plant noted that the self-propelled gun was developed in strict accordance with the assignment of the customer. 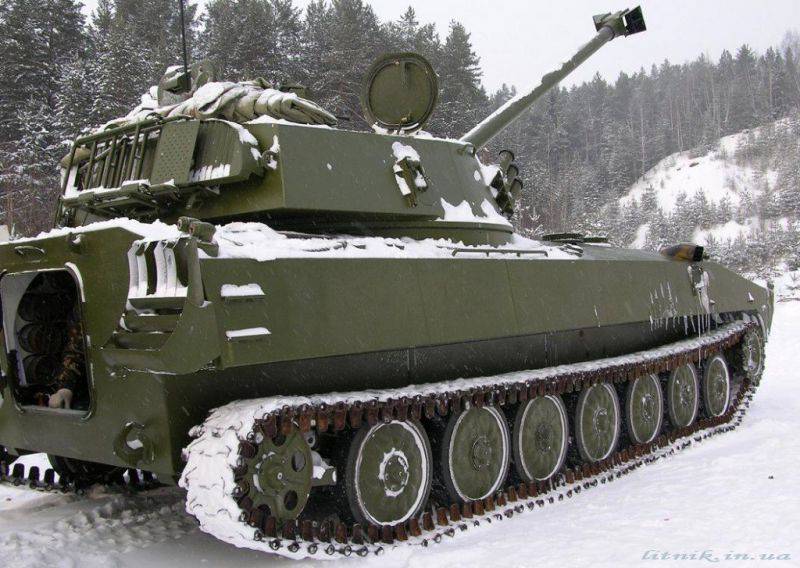 It was reported that due to the identified problems, the Ministry of Defense does not plan to purchase new 2S34 self-propelled guns. As a solution to this problem, the development of a new version of the machine based on a different chassis was called, providing the required stability during firing. However, as far as is known, the Hosta variant on the new chassis has not yet been created.

By now, according to various sources, at least 50 2-34 “Khost” self-propelled artillery guns have been built. This technique was transferred to the various divisions of the ground forces, where it has operated to date. From time to time, these combat vehicles take part in various exercises. For example, in March of this year, a camp for artillery was held in the Southern Military District. During this event, the Prudboy general range was fired using various weapons, including Khost.

At the moment, the troops have several dozen new self-propelled guns such as 2C34 "Khost". Information on further purchases of such equipment is not yet available. Thus, the gradual replacement of existing ACS “Gvozdika”, planned in the first half of the last decade, is still being postponed indefinitely. Nevertheless, even in such a situation, ground forces were able to obtain new equipment with sufficiently high characteristics, although not fully satisfactory to the military. It is possible that in the near future the problem with an insufficiently stable chassis will be solved, which will make it possible to begin the construction and supply of high-grade self-propelled guns that fully meet the requirements.