Self-defense with a knife: the basic rules for the use of a light knife 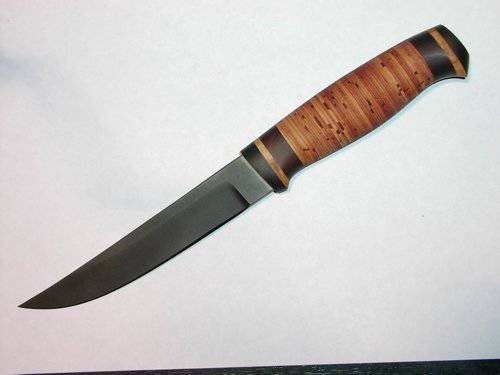 A knife in his hand protecting himself, his family, a man can be a powerful argument that can turn the tide in favor of the victim of aggression. So, if robbers broke into your house, the best place to defend is the kitchen, where you can find a whole arsenal, including large kitchen knives.


Going beyond the redistribution of the house, remember the good old Russian tradition - a man should have a knife, all Russian people from ancient times to the 20 century had knives, often they were zaspozhniki. Of course, do not overdo it, you should not wear a sword and bayonet with you. In order not to attract attention, a knife should be hidden wearing. Remember that the knife is the last line of defense, otherwise it is easy to cross the line between the victim and the aggressor.

Some rules for using lightweight knife

In this article we will look at the basics of using a light knife, that is, knives with thin blades (dining rooms, most kitchen knives, penknives, pocket knives, fish knives, etc.).

- They are easily bent or broken at a strong blow, so you should not prick them, it is better to use cutting blows.

- If it came to a fight, it is clear that you need to use all means, it is better to cripple the enemy than to be mutilated or killed by a group of bandits (usually similar group attacks). When striking, it is better to hit in the face, in the eye area, in this case there is a chance that when the enemy is injured, you can escape. Apply cutting blows to the hands and feet. Blood, even from a minor wound, can stop an aggressor who will be busy with himself (it concerns only beginning criminals, hooligans, a recidivist gangster will stop only a serious injury).

- The best blow is treacherous, that is, try not to show the enemy (s) that you have a knife, do not scare them.

- If you pulled a knife, be prepared to use it.

- Intimidation with a knife (demonstration of a knife) is applicable only in extremely rare cases to influence the psyche of the enemy. But you must be absolutely sure that the enemy is weak and it will “break”, and not take your action as a signal to your attack.

Main blows with a light knife

Considering the fact that you have a light knife in your hand, and we live in Russia, and not in warm Brazil, therefore a significant part of the time the human body has additional protection in the form of thick clothes, the choice is small. These are blows to the forearms, hands, face and neck.

If you were able to keep the knife in a hidden position, you can block the movement of the enemy to grab or hit you with one hand, and strike the face, head with a knife. Such a blow in most cases is not dangerous to the life of the enemy, but is very painful and causes severe bleeding. An adversary who has a forehead damaged, his eyebrows may be completely incapacitated from pain, fear, and the blood flowing to his eyes.

But the neck cut can be fatal, so think before such a blow - a deadly fight or enough to frighten the enemy.

Cuts of hands, palms, forearms are also important in that they cause significant blood flow, which will frighten an inexperienced enemy, make him forget about you and aggression. In addition, if you damage the motor tendons, the nerves on the inside of the wrist or the elbow, the enemy will be greatly weakened, and most likely it will not be a threat anymore. At least you will have a few seconds of the "shock state" of the enemy to escape. If the battle is going to destroy, do not hesitate, finish the enemy, for example, kick him in the knee.

It is advisable if you want to learn the basics of a knife fight, its basic equipment, study the relevant literature, for example: find the online brochure of the times of World War II - N.N. Simkin “Melee” (1944), or the book A.I. Travnikov "School of knife fighting. Grab, fighting racks, movements, strikes, techniques of protection and throwing of a combat knife. According to the KGB special forces. If you live in the city, find a knife fight school, or a school of hand-to-hand combat, where knife fighting is a significant section in training. In the absence of such schools, find a partner, it is better to train together, or in a group.
A. Kochergin "When you need to get a knife"

Participants: Alexander Popov
Duration: 00: 53: 53
Description: The film demonstrates the technique of racks, movements and strikes. The material is interesting for everyone who studies the fight on knives.

We are in Yandex Zen
My humble experience (survival instruction)
Self-defense with a knife: the main aspects of the use of a heavy knife. Cold weapons from the point of view of the law
16 comments
Information
Dear reader, to leave comments on the publication, you must to register.