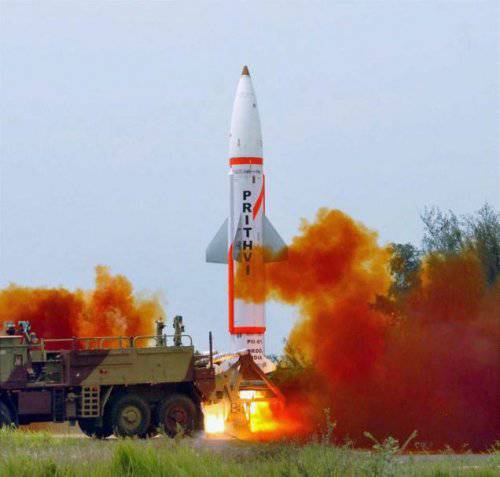 India is seriously considering NATO proposals to join their missile defense program. In this case, NATO is trying to implement a plan to develop a powerful bridgehead to repel possible attacks from, in the first place, Iran, as well as from Pakistan, whose relations have noticeably deteriorated in relation to the United States. India has its long-standing accounts with Islamabad, so the Indian authorities took the proposal of the West with appreciable interest.


If India agrees to become part of the NATO missile defense system, then it can be considered that NATO is killing two birds with one stone: it receives a nuclear power as an ally and from its territory reflects, if there are any, rocket attacks of its opponents. It should be noted that India today has quite significant potential in the field of missile defense. Under the conditions of constant confrontation with neighboring Pakistan, the Indian authorities have long been engaged in financing various programs for designing, building and testing various types of rockets: "surface-to-surface" ("Agni-2", "Shoria" and "Prithvi-2) and" surface- air ”(“ Akash ”). In addition to using the "offspring" of its own production, India works very closely with Israel in terms of procurement of rocket technology. So in recent years, Barak missiles, which belong to the class of short-range missiles, were purchased from Israel. India would like to purchase the Arrow missile defense system from Israel, but in this case the Americans blocked the deal, since a number of American technologies were used to create the Arrow. For obvious reasons, the United States is not inclined to share its developments with countries that have not yet belonged to their allies.

How profitable the Indian side is to cooperate with NATO is still an open question, but the fact that India can independently defend its borders is beyond doubt. To date, several successful tests of the Agni-2 and other surface-to-surface missiles have been conducted. In addition, tests of Agni-2-Prime missiles are being prepared. As stated by the CEO of the developer, the head of the rocket and its engines are ready. The first launches are planned to be completed in November from mobile launchers - large trucks. From the wheeled platforms, another rocket, the Akash, is launched, which is a medium-action rocket. It is quite capable of intercepting everything that moves at an altitude of up to 18-kilometers and at a distance of up to 30-kilometers.

Such deep echeloned missile defense will protect not only the capital - New Delhi, but also the cities of Mumbai and Bangalore from a possible Pakistani missile strike. Protecting Bangalore, to which Pakistani missiles fly for about 8 minutes, the authorities of India pay great attention not by chance. It is in Bangalore that the main information technology center of the country is located. If this center is hit, the whole country will remain simply unprotected. To protect Bangalore, missile control signals from the Israeli complex of the radar station, called the Green Pine, are used.

It remains to wait for the response of the Indian side to the NATO proposal to join efforts in terms of deploying a large-scale missile defense system.

We are in Yandex Zen
The defense potential of India in the images of Google earth. Part 1
Top 10: Weapons of the Future of India
15 comments
Information
Dear reader, to leave comments on the publication, you must to register.