8 2015 June
66
In the domestic media appeared news on the development of a new combat railroad missile system (BZHRK). As follows from recent reports, the work is going on in full accordance with the schedule and in the foreseeable future will allow the construction of new systems to begin. 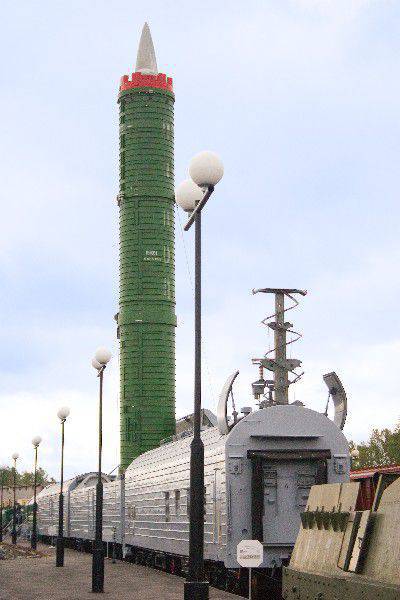 Last Thursday in the domestic media there were reports of the latest statements by the leadership of the Ministry of Defense. According to Rossiyskaya Gazeta, citing Interfax, Deputy Defense Minister Yury Borisov spoke about the ongoing work on the creation of the BZhRK project, codenamed Barguzin. According to the deputy minister, the development of the project is going according to plan. The authors of the project do not face any difficulties. At the moment, the Moscow Heat Engineering Institute, which is responsible for the creation of a new complex, has completed the development of a draft design.

Y. Borisov also revealed some details of plans for the construction and deployment of new equipment. By the end of this decade, it is planned to begin the full construction of new BZHRK. So, before 2020, one of the strategic missile divisions should receive up to five regiments armed with Barguzin complexes. More accurate figures have not yet called.

The Deputy Minister of Defense indirectly confirmed that the new Barguzin BZHRK will be significantly different from the previously used Molodets complexes of a similar purpose. According to Yu. Borisov, the new BZhRK will not differ in any way from ordinary trains. It is expected that this will increase the secrecy of the transfer of "rocket trains" and significantly reduce the likelihood of their detection on the patrol route.

According to earlier press reports, the development of a new BZHRK project began in 2012 and is being carried out by the Moscow Institute of Thermal Engineering. As follows from the latest news, the drafting project has now been completed. Thus, during the project some success was achieved and an important design stage was completed. Over the next few years, a technical design should be developed, as well as test systems built and tested. As a result of all these works, by the 2020, the Strategic Missile Forces should receive the first Barguzin production complexes.

Until recently, the issue of a rocket planned for use was relevant. There were various assumptions on this subject. According to different versions, the Barzhuzin BZHRK was supposed to be equipped with RS-24 "Yars", PC-26 "Frontier" missiles or products based on them. In addition, the use of an intercontinental ballistic missile for submarines P-30 "Bulava" was not excluded. Last December, it was announced that the main armament of the new BZHRK would be the Yars or Yars-M rocket. Thanks to this, it is expected that it will be possible to ensure the highest possible degree of unification with existing missile systems and, as a result, to simplify the development and construction of new systems.

Other features of a promising railroad missile complex are still the subject of controversy due to the lack of official information. Obviously, according to the general architecture of the BZHRK, the Barguzin will resemble the well done Molodets complex with the RT-23UTTH rocket. The structure of this complex will include one or several locomotives (depending on the total weight of the train), wagons for combat crews, life support systems, as well as wagons with launchers.

The experience of the Molodets complex allows us to speak with confidence about the design of the car-launcher. Apparently, this element of the complex will be made in the form of a freight car or refrigerator wagon, with minimal differences from similar products for civilian use. In the internal volume of the car will be located the transport and launch container of the rocket and its attachment system to the lifting boom. Thus, before launching the roof of the car will open, and the task of the boom will be to lift the rocket container in a vertical position. A different launcher looks impractical or technically impossible. 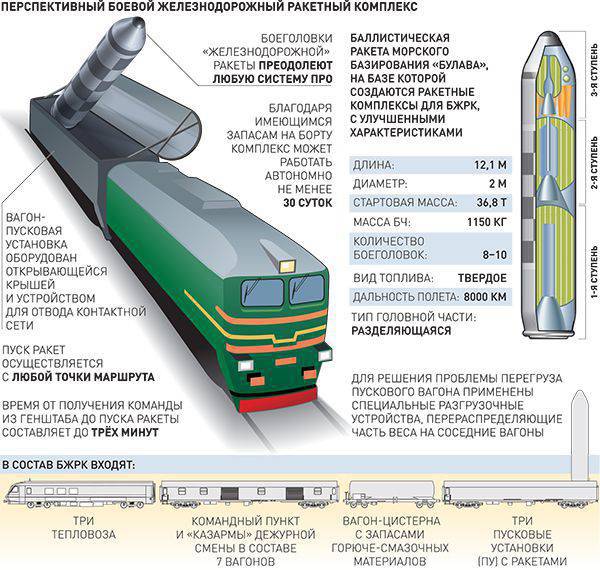 Of great interest are the words of Yu. Borisov about the disguise of the new BZHRK. According to him, the “rocket train” of the new model will have the minimum possible differences from the usual compositions. It should be recalled that the complex "Well done" had several noticeable differences from other trains. In particular, due to the large launch weight of the rocket and the launcher, the cars had to be equipped with a reinforced chassis, distinguishing them from other rolling stock. There were also other differences. All this, to a certain extent, unmasked the BZHRK “Molodets”, although on the whole the secrecy of the complex received good marks.

Apparently, the key to solving the problem of stealth was the use of new missiles. According to open data, the RS-24 “Yars” missile is more than twice as light as the PT-23РТХ product. Among other things, this allows us to simplify the design of the car-launcher and, as a result, not to use special equipment and various elements capable of unmasking it.

The Deputy Minister of Defense states that the first combat railway missile systems of the new model will be transferred to the Strategic Missile Forces by the end of this decade. Such information may be cause for optimism. According to the 2012-13 information, by the end of the decade it was planned to complete development work and begin preparation for complex testing. The supply of serial technology was attributed to the next decade. According to updated data, OCD will be completed much earlier, which will allow you to perform all the necessary work over the next five years. Thanks to this, the production of Barguzin serial complexes and the transfer of such equipment to the troops will begin in a few years.

Ctrl Enter
Noticed a mistake Highlight text and press. Ctrl + Enter
We are
"Barguzin" instead of "Well done" as a response to the missile defense systemRocket invisible
66 comments
Information
Dear reader, to leave comments on the publication, you must to register.