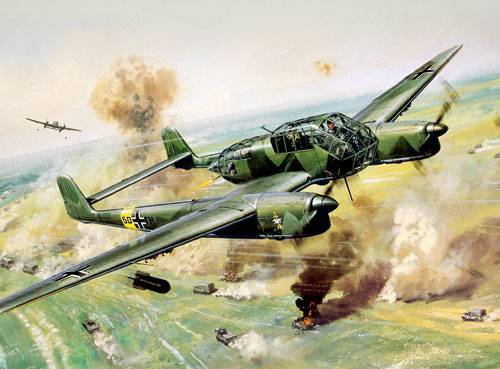 The tender for the production of light reconnaissance aircraft won the company Focke-Wulf. The Fw 189, built on a two-beam scheme, proved to be more reliable, more comfortable and easier to manufacture than the original asymmetric design of Richard Vogt. Fw 189 was put into service in 1940 year and in the USSR received the nickname "frame". "The frame arrived - wait for the bombing," soldiers joked


Have you ever seen an asymmetric car? Of course! For example, a mining truck with an offset cabin. And the irregularly shaped ship? Naturally, remember any aircraft carrier. But asymmetric aircraft in stories there were very few. Let's say even more precisely: only two. The first of them was created in 1937 by the gloomy Teutonic genius, aircraft designer Richard Vogt.

In the 1930s, the air forces of the young Reich grew by leaps and bounds. Reich ministry aviation regularly held tenders for the development of new aircraft models between leading German enterprises. In an effort to outperform competitors, designers offered completely insane-looking designs - and sometimes they were put into practice. However, this concerned not only aviation: the project of a giant railway with a gauge of 4000 mm, the titanic Mouse tank, miraculously preserved to this day in Kubinka, and many other outlandish projects were born.

In 1937, there was a need for a light reconnaissance aircraft. The widely used Heinkel He 46, put into service as early as 1931, was a rather unsuccessful model due to poor visibility. On the whole, its construction is outdated both technically and morally. The main requirement for the new car was good visibility from the cab. Aircraft 1930-ies seriously suffered from the small area of ​​the glazing of the pilot's seat and the presence of a significant number of "blind zones" (in particular, under the plane). In principle, the “full-size” cabin glazing was already used at that time, but only on heavy aircraft, where engines with propellers could be placed on the wings. The nose of a small and light single-engine aircraft could not be made glass. A plane with a pusher propeller could be a way out of the situation, but designer Richard Vogt suggested going the other way. 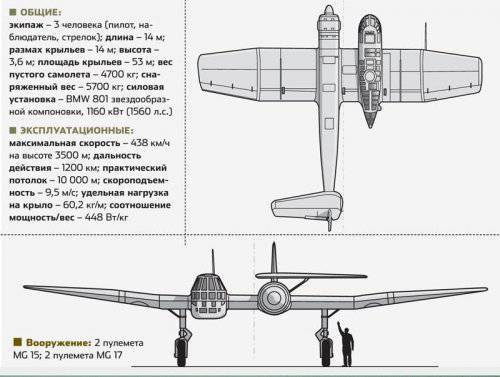 Blohm & Voss BV 141
The most surprising thing was not even the fact that Vogt was allocated serious funds for the project, but the fact that they were used “for business”. BV 141 was built and successfully flown

Initially, work on the project was entrusted to the company Arado Flugzeugwerke, which once developed the first combat biplanes of the Luftwaffe. The most famous Arado aircraft was the Ar 196 flying boat, which became the standard seaplane of the Imperial Naval Forces carrier-based aircraft since 1938. But the German aviation ministry never hesitated to order more than needed, so requests were sent to other leading design bureaus - Focke-Wulf, Blohm & Voss and Henschel. In fact, the order was all-German - all aircraft factories, without exception, undertook the design of a light reconnaissance aircraft. But only the four mentioned models were approved by the top management at the drawing stage and “allowed” to manufacture working prototypes.

The first to respond to the call of the party were the designers Henschel, who presented the Hs 1937 model at the beginning of 126. She had only one drawback: the design is monstrously outdated at the development stage. Henschel worked for speed, getting a finished plane when competitors did not even have complete calculations. In fact, it turned out a normal monoplane. But there was no way out for the game - and Hs 126 went into the series. However, the tender was not withdrawn because the visibility problem was not resolved.

Arado constructors also failed to cope with the task. They proposed a model Ar 198 - a traditional layout monoplane, but with two cabins. At the top were a pilot with a gunner, and at the bottom - an observer. Because of the specific glass “belly”, the aircraft received the nickname “Flying Aquarium”. In practice, the plane was unsuccessful. It was too expensive and difficult to manufacture and - which is especially unpleasant - unstable when flying at low speeds. For the scout it was unforgivable. No upgrades helped: Arado did not receive approval for mass production.

Proposals from Focke-Wulf and Blohm & Voss turned out to be much more elaborate and competent. Focke-Wulf proposed a compact twin-engine Fw 189. The small aircraft's light wings could not serve as a supporting structure for the engines, and designer Kurt Tank got out of the situation by making a double tail section; the tail booms became an extension of the engine nacelles of the power units. This significantly increased the rigidity of the structure and made it possible to place a teardrop-shaped, fully glazed cockpit with 360-degree visibility between the fuselages.

But the designer of the Blohm & Voss firm, Richard Vogt, approached the solution of the visibility problem radically. He basically did not want to use a twin-engine scheme - and managed to find a way to install a drop-shaped glazed cockpit on a single-engine aircraft. The solution was as obvious and simple as it was ridiculous. On the basis of one of his patents in 1935, Vogt proposed an asymmetrical aircraft. The fuselage with the engine and bomb hatches was to be located on the left, and on the right, at the same distance from the plane's axis of symmetry, the cockpit.

The aircraft was built in 1937 year and received the name BV 141. Installed on the machine 1000-strong star-shaped engine Bramo 323 Fafnir. By the way, this was one of Vogt’s few mistakes - the engine was low-powered and unreliable. In the 1910-ies, Bramo was a major aircraft manufacturer (called Siemens-Schuckert), then switched to engine manufacturing, but by 1930, its shares fell seriously, and in 1939, it was bought with BMW giblets. At the same time, competitors from Focke-Wulf have ordered a new 12-cylinder Argus 410 engine for their development - simple, easy and reliable.

A serious issue was the balancing of an unbalanced aircraft. In the first prototypes, the tail was ordinary, but rather quickly Vogt came to the conclusion that it was necessary to develop asymmetrical tail. It appeared on the first working copy of the aircraft, which flew 25 February 1938 of the year, four months earlier than the Focke-Wulf. Surprisingly, asymmetry did not lead to any problems in flight. Dr. Vogt calculated everything quite correctly. The change in the weight of the fuselage (for example, when dropping bombs) was immediately compensated for by the torque of the weighted propeller. None of the test pilots complained, the BV 141 proved to be a maneuverable and effective reconnaissance aircraft. The task was completed - and before the competition.

But here, as already casually mentioned, there was a problem with the engine. Bramo simply did not "pull" the car, and it lacked speed. On the third prototype, another engine was installed - this time the BMW 132 N. It was equal to Bramo in power, but it was much cheaper and produced in much larger industrial batches. Nevertheless, the aircraft required a more powerful power unit. The German industry did nothing suitable.

Only in January, the 1939-th engine appeared, suitable for the revolutionary Vogt aircraft - the powerful BMW 801 with the power of the 1539 hp. By this time, two BV 141 A aircraft with a Bramo engine were made, and another six with the BMW 132 N. The new version was given the name BV 141 B and showed itself well in testing. It was also built 10 asymmetric aircraft. 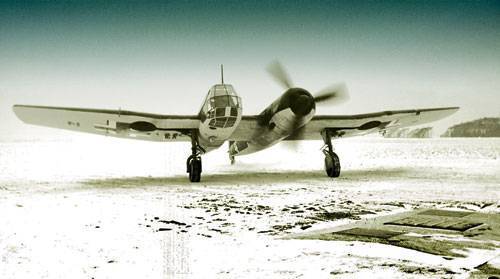 The very first copy of the BV 141 aroused the crazy interest of both the superiors and rank-and-file officers of the backlash. People who have nothing to do with Blohm & Voss were eager to get to the plant in order to get a better look at the amazing car

But time flew fast. Focke-Wulf Fw 189 has already been mass-produced, and the need for a reconnaissance aircraft with the largest possible glazing area has practically disappeared.

Nevertheless, tests and modifications of the BV 141 B continued actively until 1941. The engine power was now enough with a margin (especially since the forced version was delivered to the last experimental batch of eight aircraft), but some other shortcomings were revealed. Test pilots, including the famous Erich Klöckner, praised the flight characteristics of Blohm & Voss, but everyone scolded the landing of the aircraft with one voice. Hydraulic failures in the chassis system plagued the design from the very first prototype, and the increased weight due to the heavy engine only exacerbated this problem. One of the prototypes was even forced to make an emergency landing - on the belly. The pilot was not injured.

Tests of weapons also passed not to "cheers". It turned out that the cabin was completely unsuitable for the installation of machine guns (although initially such a task, of course, was). Powder gases due to unsuccessful layout penetrated into the cockpit and seriously interfered with the pilots. True, the plane dropped bombs perfectly - without a hitch without a hitch.

But, as already mentioned, it was 1941. The Focke-Wulf Fw 189 existed in several hundred copies, and the BV 141 was still in the prototype stage. In addition, the war was in full swing and it became increasingly difficult to find money for new projects. And the BMW 801 engines were originally developed not for a reconnaissance aircraft at all, but for the Focke-Wulf Fw 190 Wurger fighter and were always in short supply. The odious project Blohm & Voss was neatly shut down.

None of the 26 made by BV 141 has been preserved to this day (some sources indicate the number of 28, but it is reliably known about the 26 numbered copies of the aircraft). In 1945, the Allies got three asymmetrical Vogt creations - the rest were probably sent to be melted down for the army. One of them was taken to England for research - there his tracks are lost.

During the war, Vogt tried to promote several more projects of asymmetrical aircraft, but failed. However, many of Vogt's original projects were not implemented primarily because of their extravagance. For example, the Blohm & Voss BV 40, a non-motorized fighter glider of 1943, was worth it.

Like many other German designers and scientists, after the war, Richard Vogt emigrated to the United States, where he worked as a leading engineer in the Curtiss-Wright and Boeing corporations. But in history, he remained primarily as the creator of insane designs that could seriously change the face of modern aviation. For better or for worse, this is a completely different question.

Ctrl Enter
Noticed oshЫbku Highlight text and press. Ctrl + Enter
We are
The most hated German plane for the Soviet infantry, or again about the FW-189Bad memory "frame." FW 189
Military Reviewin Yandex News
Military Reviewin Google News
36 comments
Information
Dear reader, to leave comments on the publication, you must to register.