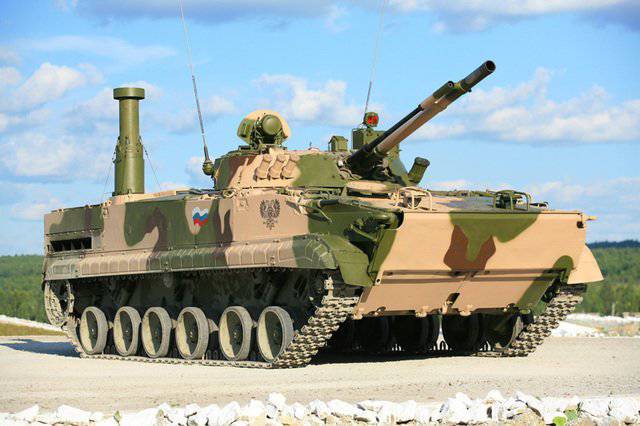 The equipment should be developed taking into account the conditions of its future use and nothing else. If you do not follow this simple rule, the consequences for the soldiers working with this technique can be most terrible.

An example of such a non-compliance with the operating conditions can be considered as armored vehicles that the marines use to land on the shore. Most of it is the BTR-80. This armored personnel carrier has equipment for swimming — a jet propulsion unit, a pump for pumping water from the hull, and a water deflector on the nose of the car, but this machine cannot be called specially adapted for operations on water. Including because of the untight case and the need to constantly pump out the incoming water from it.

The marines are also armed with infantry fighting vehicles. But this technique, that BMP-1, that BMP-2, is little adapted for the aquatic environment. First of all, this was due to the layout. The compartment for the paratroopers did not allow to place a water cannon in the aft of the machine. To move on water, we had to use caterpillars and a specific shape of the wings, redirecting water in the right direction. But the speed with such a mover was insufficient. In addition, the “exterior” of the BMP of the first and second models does not protect the surface of the vehicle from flooding, and centering allows you to swim only with very little rough sea. There is, however, BMP-3F, adapted for use in the Marine Corps. It has a whole set of water-repellent shields, a telescopic snorkel, and its seaworthiness (buoyancy and stability) have been significantly improved. BMP-3F can swim with excitement up to three points and shoot in the wave up to two points. However, few of these machines have been built, and they are all located in the Pacific navy. Whether the BMP-3F will be produced in the future is a moot point.

And this question seems to be decided not in her favor. The Russian Navy ordered an infantry fighting vehicle specifically designed for use by marines. The Kurgan "Special Design Bureau of Mechanical Engineering" (SCBM), which had previously created all domestic BMPs, will develop the combat vehicle of the Marine Corps. This tracked vehicle will have to have the same or better ground characteristics as the BMP-3, carry the same number of soldiers and have similar weapons. The differences will be in the "sea" part: the machine must have not a caterpillar or jet propulsion for swimming, but a normal propeller. With it, the BMP should accelerate on the water to 25-30 km / h. This speed is needed for the implementation of over-the-horizon landing and the landing of the landing force without losing the element of surprise: the journey from the landing craft to the coast will take no more than half an hour. Perhaps Kurgan designers even manage to “catch up” with the American EFV BMP with its 45 kilometers per hour in water. But for this you need to seriously work on the bottom of the machine. Whether the SKBM will be addressing this issue is not yet clear. 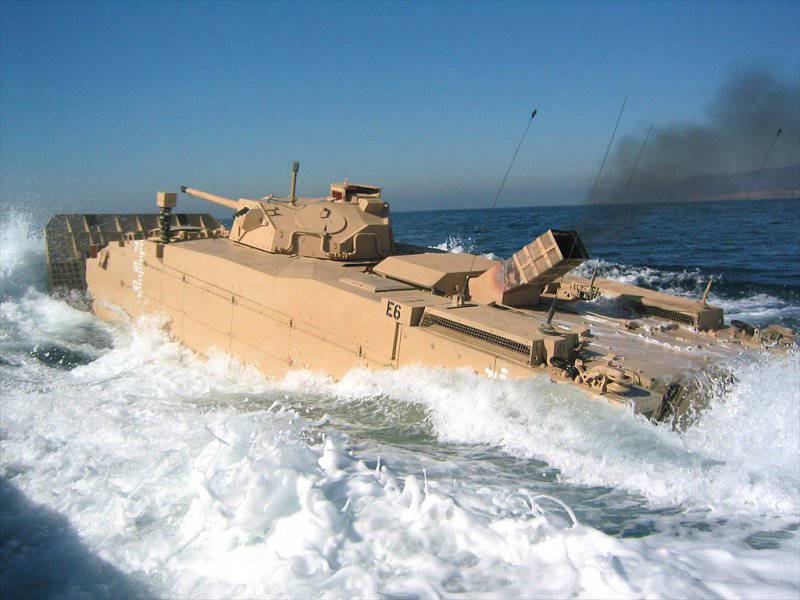 Probably, the requirement for over-discharge is caused by the fleet composition in the near future. Amphibious ships capable of approaching the coast, or generally “climbing” on it, are not built. At the same time, preparing for the construction of "Mistral", not adapted for such landings.

Site "Weapon Of Russia ”reports that the BMP for the Marine Corps will be developed on the basis of the Armata universal tracked platform. Earlier it was announced the creation on its basis tank, now the infantry fighting vehicle should be added to it. It would be logical to assume that the use of a single framework for two different machines may give another technique. There is a high probability of creating a purely land BMP at the same time as a sea infantry fighting vehicle, and this will save finances due to the maximum unification of vehicles. Yes, and retraining of crews if necessary does not take much time.

The armament of the naval infantry combat vehicle has not yet been determined, but the SKBM says that any available weapon can be installed on the machine, up to the 100-mm 2А70 gun and the 30-mm 2А72 paired with it, as on the BMP-3. Also, the machine for the Marine Corps, of course, will have several machine guns: PKM or even the Kord. In the image and similarity of land infantry infantry fighting vehicles, a launcher for anti-tank guided missiles can be installed on the sea.

But on the armament of the marine BMP there is another opinion. The editor of Arsenal V. Murakhovsky considers it expedient to produce vehicles with different configurations of weapons: either artillery, or air defense systems, or universal guns. Anti-missile missiles, according to Murakhovsky, should be present on all machines, because on the shore, the enemy can put up against the landing and tanks as well.

Adoption of the BMP for the Marine Corps will take place no earlier than 2015. Until that time, according to the rearmament plans, the outdated infantry vehicles will be replaced by the BMP-3.

We are in Yandex Zen
Heavy armored personnel carrier BTR-T
Is the old well forgotten to become the new? Part-2. By call of honor and duty
19 comments
Information
Dear reader, to leave comments on the publication, you must to register.