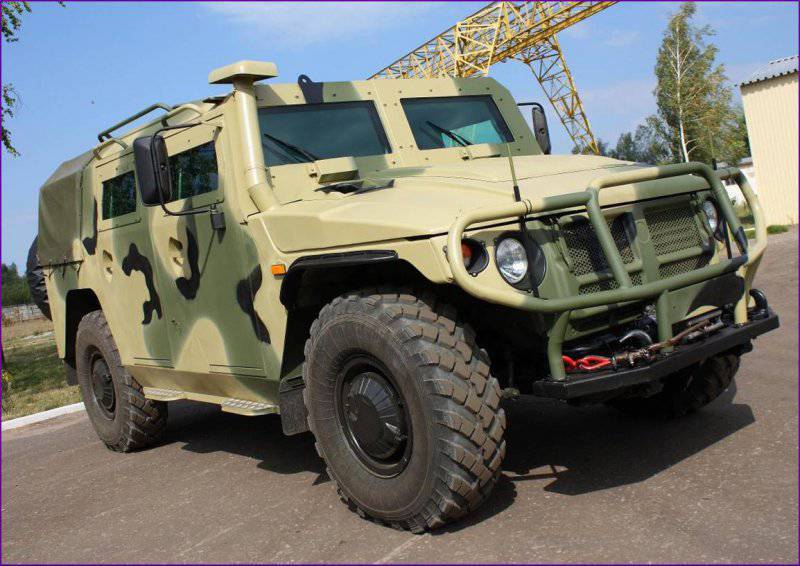 Arzamas Machine-Building Plant launched production of a modified armored vehicle "Tiger-6A". The design of the car is based on the base model SPM-2 "GAZ-233036" "Tiger". One of the main advantages of the car is the armor protection of the corps, which exceeds the strength of the corps of conventional army "GAZ-66" and "UAZ".

By the way, "Tigers" at the factory are available from the year 2005. Tigers can transport nine people at speeds up to 140 kilometers per hour. Also, the crew of the "Tiger" can in the direction of movement to shoot from the hatch on the roof, as well as through the doors that open on the sides and on the armored glass in the doorway.

Now the armored car is produced in several modifications: SPM-1, SPM-2, command-staff vehicle P-145BMA for law enforcement and a special vehicle VPK-23314 "Tigr-M" by order of the Ministry of Defense of Russia.

The new "Tiger-6A" is used for the implementation of safe movement in combat conditions of commanders. At the moment, the armored car began preparations for the control of its tactical and technical characteristics, and then will be conducted ground tests. After completion of all the provided checks and tests, “Tigr-6A” is planned to be launched into the series.

The internal mechanisms and technical equipment of the new "Tiger" have not undergone major changes, except that the body has fundamentally changed. Additional armor was installed at the front and front doors - around the entire bottom and the windshield. This contributes to the greatest protection of crew members from bullets and mines. Also installed and additional armor protection of the engine. Installed an additional two side rear doors, like the front. They serve for more convenient disembarkation of the crew. The thickness of the armor plate of the windshields increased, and the brand of armor steel was changed to increase the fire resistance of the Tiger-6A. The design of the armored car also appeared combat cargo compartment, which is closed by an awning, in the rear of the body of the armored vehicle. The compartment is designed for a wide variety of target needs: both for the transportation of two more people and for the transportation of additional cargoes. As a result, the new "Tiger-6A" became similar to an armored pickup.

The cabin has become more comfortable: along with seat belts and head restraints, there are also “floating” seats on the shock absorbers, which soften the off-road driving. Protection against splinters is also installed. At such protection the number of technical fabric is increased. This prevents fragments from exploding shells from entering the armored vehicle.

Sergey Burov, Head of MSC-6, shares his impressions about the new car: “This new“ Tiger ”is a very successful car. For fast and safe transportation of the crew it is better to come up with impossible. I believe that "Tiger-XNUMHA" has all the chances for further modernization. I am sure it will be popular both in the domestic and foreign markets. ” Additional protection is also provided with an automobile engine. At the same time, the class of armor of all glasses has changed - from “6” to “5”.

In addition to supplying Tiger-6А to the Russian market, a number of foreign customers are also interested in acquiring a new model. Already ten states, including Jordan, Brazil and Israel, have expressed such readiness.

By the way, the other day, at the Tigra-6A manufacturing plant, a certification audit of the quality management systems of the products being produced was held. The main goal of the audit is to obtain a certificate of quality management system (QMS) compliance with the requirements of GOST RV 15.002-2003 and GOST R ISO 9001-2008 by OAO AMZ. Specialists of the Military Register voluntary certification system took part in the certification. Specialists of the Military Register decided to issue to AMZ a certificate of conformity of products for a period of up to three years.
Ctrl Enter

We are in Yandex Zen
Protection for armored vehicles (Part 4)
10 best armored vehicles from the Discovery Channel
17 comments
Information
Dear reader, to leave comments on the publication, you must to register.